The author of the wildly popular 18th century seagoing saga created, out of his own life, a fiction nearly as elaborate. 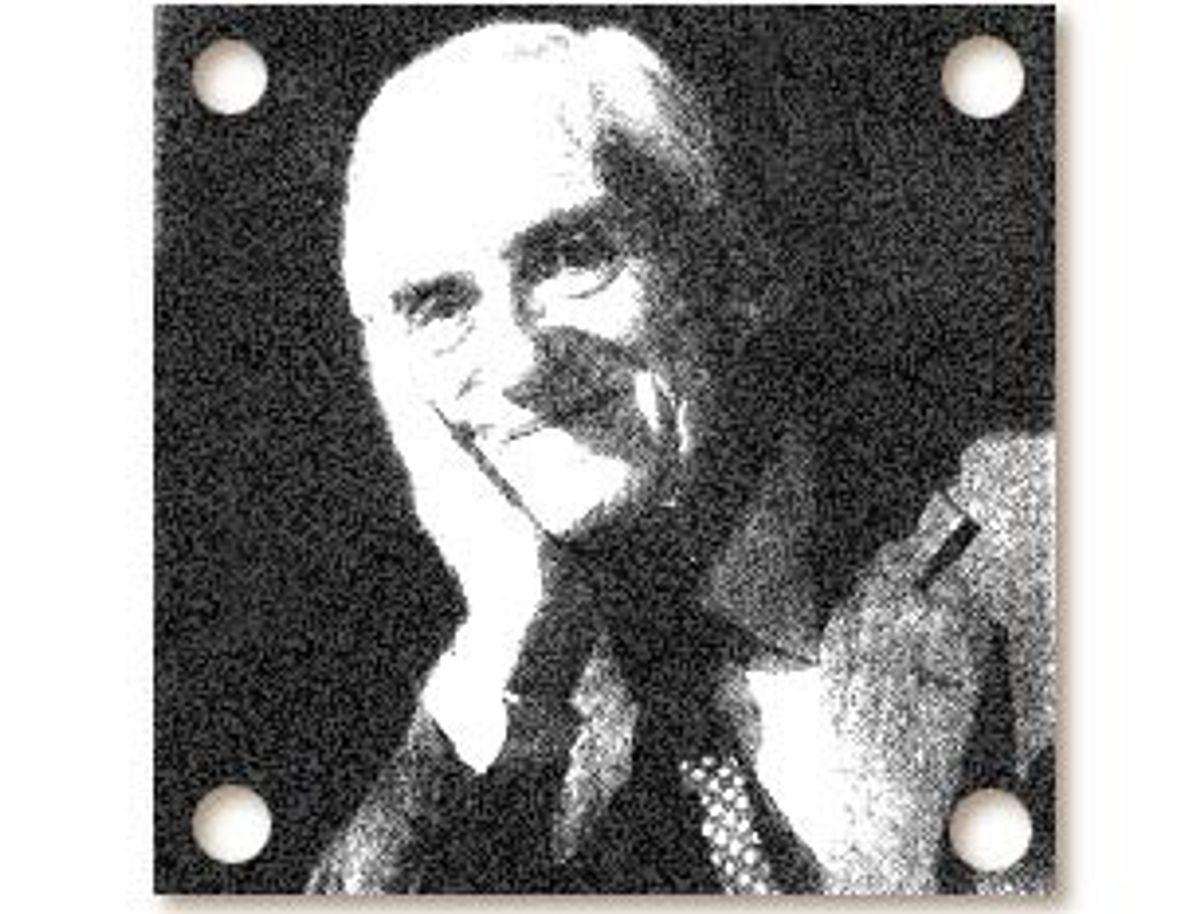 When Patrick O'Brian died in Dublin early in the new year, not long after the publication of "Blue at the Mizzen," many of his readers were not only bereft, but also agog at the possibility that he may have left another novel laid down on the stocks. His avid readership spans oceans, classes and politics, from right to left, from Charlton Heston to Tom Stoppard. The long, discursive saga of Jack Aubrey, the British naval officer and Stephen Maturin, his surgeon-spy companion, takes readers into a fictional universe that covers the globe, yet is usually contracted into the claustrophobic wooden walls of a Royal Navy ship in the war against Napoleon.

O'Brian's fans declare that his work will live forever, but perhaps the most fascinating reading will be his own life story, which he had crafted as a fiction believed almost to the end by most reviewers and readers. Working as an honored guest at Trinity College, Dublin, for the last two years, he was recently awarded an honorary doctorate as a credit to Irish letters -- despite the fact that he'd adopted his name and his nom de plume, Patrick O'Brian, along with his Irishness, with no great claim to either.

O'Brian was born Richard Patrick Russ in Chalfont St. Peter, Buckinghamshire, England, in 1914. His father was a venereologist and his grandfather a German furrier. His birth year, the start of World War I, may have been one reason why he didn't want to advertise his German ancestry too much -- after all, even the British Royal family changed its name from Battenberg to Mountbatten at that time to hide its Teutonic antecedents. The family was prone to feuds, and O'Brian eventually broke off relations with his siblings, as indeed later he did with his own son.

During World War II he left his wife and two children to move in with the wife of Count Dmitri Tolstoy. Both were involved in British secret service activities. At the end of the war he changed his name by deed poll to Patrick O'Brian and married the now ex-countess. They lived first in Wales and then moved to the south of France where for many years he was a diligent, well-reviewed but poorly bought author and translator.

He saved his discursiveness for his books, and his notorious reluctance to give interviews, or at least to give any accurate information in them, broke down only in the last years of his life after his wife died in 1998, which is when his Irish Catholic persona was peeled away by investigating journalists. Far from detracting from his reputation, the mystery of the practical joke he played on decades of reviewers and interviewers is more likely to enhance interest in his life and work.

In a touch worthy of one of his own novels, his now-considerable estate may well go to his stepson Count Nikolai Tolsoy. Unless he took precautions, and deeded his estate to Tolstoy's stepchildren, then over $2 million of it would go to pay a libel suit incurred when Tolstoy accused a British officer of sending Russian and Yugoslav prisoners to their certain execution by the Communists at the end of World War II.

O'Brian's involvement with the sea began in the 1950s when he worked on "The Golden Voyage," a story based on the 18th century circumnavigation of the world by Capt. Anson. He discovered a rich vein of material that could be mined for fiction. In the late '60s an American editor suggested the maritime theme for what became the Aubrey/Maturin series of which the first volume, "Master and Commander," was published in 1969 when O'Brian was 54.

For most O'Brian fans, it's probably heretical to suggest it, but a recently created vacancy may have inspired his editor. C.S. Forester, creator of Capt. Horatio Hornblower, had died in California in 1966. After reading all the available O'Brians, I returned to the Hornblowers of my youth and discovered two things. First, they were very good in their own right, and second, Jack Aubrey was a sort of anti-Hornblower, as if O'Brian had assiduously tried to differentiate his character totally from any accusations of sequelling or plagiarizing his predecessor.

Hornblower was haunted with self-doubt, totally tone deaf, Spartan and solitary in his habits, but with sharp intellect. Aubrey, with some time out for introspection, as in the last book, is a sybaritic, convivial soul whose love for music has him and Maturin scraping away at their violins in the Captain's cabin. And far from the ship's biscuit and salt meats of Hornblower, there are so many descriptions of menus in the Aubrey/Maturin series that there's a spinoff cook book.

However, while Forester knew how to sail, O'Brian's specialty was sailing in late 18th century English, redolent with archaisms and technical arcanae. In fact, he admitted to one interviewer that he occasionally made some of it up, but for most of us who couldn't tell a futtock shroud from a gudgeon, it would be impossible to tell. His other big step forward was to double the attraction by having two lead figures, of contrasting but complementary personalities.

O'Brian transposes Hornblower's icy intellect into the brooding Stephen Maturin, half Irish and half Catalan. A Catholic in a Protestant navy, he is prepared to leave the plight of Ireland on the back burner until the main threat to freedom, Napoleon, is dealt with. The two are then launched on their career of mayhem to the king's enemies, and equally important, the infighting, disappointments and rewards of a naval officer seeking the financial and social rewards of promotion. He makes it plain that the navy was a highly qualified meritocracy. You could get promoted on merit and were unlikely to get too far without it, but it always helped to have patronage on your side. It is this attention to the minutiae of social life and family responsibilities that invited reviewers to make comparisons with Anthony Trollope, or if they really wanted to please O'Brian, with Jane Austen.

Like Hornblower before him, Aubrey and his career were modeled on several colorful characters, although Thomas Cochrane, who later went on, in disgrace from the Royal Navy, to head the Chilean navy, is clearly a major inspiration. And Chile is, of course, where Aubrey finds himself in the final book of the series, answering the nagging doubts of all those fans who wondered what would happen to their heroes when Napoleon was finally gone.

Historical fiction is often unfairly relegated to a genre niche, and O'Brian's series was appreciated by only a small coterie until Norton rediscovered him 20 years after he had begun it and reissued the earlier books under heavy pressure from readers. It was only then that, in his 70s, he began to get the critical recognition and royalty checks that he so clearly appreciated, no matter how belated.

For anyone who wants to start the series, it is perhaps even more essential than usual to begin at the beginning. Each book is clearly a chapter in a much longer work, in which the characters and situations are built up from the beginning. Some readers might find the leisurely pace -- Jane Austen on the quarterdeck -- difficult to get into, but once they have, the never-tedious attention to detail and his wry humor will carry them along.

There is indeed a great deal of hyperbole from his readers, who at times can have the fervor of Trekkies at a sci-fi convention. But once you are caught up in the rhythm of what is now, effectively, an unfinished 20-volume picaresque novel, O'Brian is almost as good as his fans say he is.