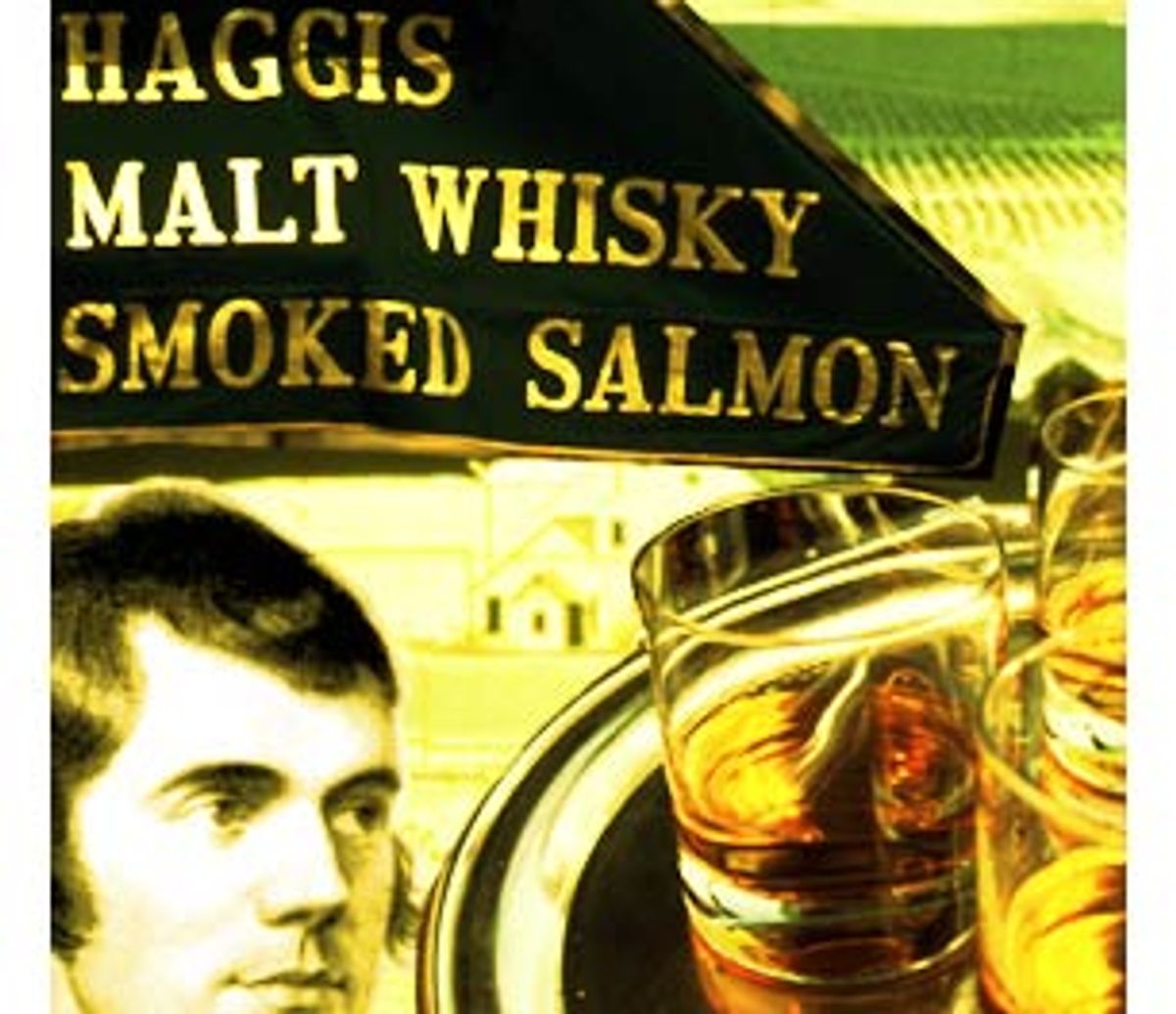 I have come back to the town of Kincraig, by Kingussie, in Inverness-shire. To Alvie House, an Edwardian shooting lodge set on a 13,000-acre estate above a small loch in the Scottish Highlands. Back to celebrate with the only nation in the world that does not devote its most important national holiday to a military hero or a political leader, but instead chooses to honor its favorite poet -- Robert Burns.

A couple of weeks ago, on New Year's Eve, millions of people all over the world greeted the new millennium singing a Burns all-time big hit:

Should auld acquaintance be forgot,

And never brought to mind?

Should auld acquaintance be forgot,

"Auld lang syne" is Scots dialect for "long ago." And Burns is reminding us to honor the past and remember the importance of old friendships, and that's precisely what all of Scotland does every year on the anniversary of Burns' birth. If you can get yourself to Scotland for a long weekend leading up to Tuesday, Jan. 25, you're in for a hell of a party.

Scotland is not rich in farmland, and its climate can be less than ideal for growing things. As a result, the history of its cooking demonstrates the Scots' skill at making a lot from a little. The Scots are devoted to recipes that are based on root vegetables like potatoes and turnips. Because of the intensity of the winters, Scots created a cuisine designed to produce a sense of inner warmth -- lots of porridge, thick soups, endless rounds of scones, oatcakes and Dundee cake.

Hundreds of miles of seashore, loch-front and riverside, however, give Scotland access to an ideal source of seafood. Scotch salmon is world famous, and there is a generous supply of trout and haddock. Aberdeen Angus beef produces excellent steaks, and the hunting season brings in venison, pheasant, hare and grouse.

Very often the most important dish at a Scottish gathering is based on an ancient recipe that stuffs meat, vegetables and grain into the stomach of an animal and then cooks it over a steaming liquid. Christmas pudding was originally a meat sausage of this kind. In the late 1600s, dried fruit was added and the wrapping shifted to a pudding cloth. Eventually, the fruit replaced meat entirely.

Burns wrote a poem entitled "To a Haggis," in which he calls the dish the "great chieftain of the pudding race." Accordingly, haggis is the featured dish at a Burns Night party. Alongside the haggis you might have some mashed parsnips and Clapshot, a turnip and potato puree. The menu could open with Cock-a-Leekie soup made from chicken and leeks, and close with Cranachan, a raspberry cream, presented with petticoat tail shortbread cookies.

The word "haggis" comes from the verb "to hack" or mince, as in mince pie. The same root gave us the word "hash," and haggis has much in common with our modern recipes for hash. Traditionally, haggis is made from assorted animal parts that have been finely chopped, then seasoned and cooked in a sheep's stomach, though today the container in which it is cooked is usually a cloth bag. The use of an animal's paunch as the receptacle for the ingredients adds that touch of romantic barbarism that is so dear to the Scottish heart. Haggis goes with howling bagpipes and leaping over swords. The less you know about the preparation of the dish the better. Be content with the knowledge that it looks like a round meatloaf and tastes great.

The beverage of choice on Burns Night is whisky, and in this case, the more you know about its preparation, the better.

The Scots have been distilling spirits for hundreds of years. No one is quite sure when they got started, but there are records in the Edinburgh tax office that deal with whisky going back to 1495. In those days, the monks of Scotland were making a drink called "the water of life." It had a big-deal reputation as a cure-all, and everyone claimed to drink it for purely medicinal purposes. In the Gaelic language of Scotland it was called usquebaugh, which sounded like "uishgi" to the English, who soon mispronounced it as "whisky."

These days, there are two kinds of Scotch whisky -- single malt and blended. The process for making a single malt is as follows:

1. Barley grain is moistened with water. After a few days it begins to sprout, a process called malting.

2. The malted barley is dried with heat from burning peat, which adds a smoky flavor. Peat is decomposed plant matter that is so concentrated that it can be cut into blocks and burned like wood or coal. The fields of Scotland are filled with it.

4. After a while the liquid is drained away from the ground barley and mixed with yeast. The natural sugar that the liquid picked up from the barley interacts with the yeast and converts it to alcohol. This process of fermentation is basically the same chemical reaction that produces beer or wine.

5. The fermented liquid is transferred to a still, which is really a giant teapot. Since alcohol boils at a lower temperature than water, it turns into a vapor first and rises to the top of the still, where it recondenses back to liquid alcohol. The shape of the still has a considerable impact on the final taste of the whisky. If the still is tall, some of the vapor will drip back down and be distilled a second time. The result will be a lighter taste. A short pot can produce a scotch with a creamier body. Every still has its own distinct shape and a characteristic effect on the flavor. Makers are very concerned about changing a still, and when they must, they do it by reproducing their old pot down to the last dent.

6. At this point the whisky is transferred to its aging cask. When scotch was first made, the wooden casks were thought of as mere storage containers. Eventually, however, the still-masters discovered that the cask could change the flavor of the whisky. During the 1800s, the English developed a great taste for sherry, which they imported from Spain in oak casks. When the sherry was taken out of the barrels, the empty casks were purchased by whisky-makers. During the 1900s, the distilleries also began to use spent bourbon casks from the United States, which added caramel and vanilla notes to the scotch. The wood the cask is made of and how it was used before it is filled with the whisky alters the final flavor of the scotch.

Single malt whisky is made from barley, in single batches, and only at one specific distillery. The final product may come from a number of different casks, and of different ages, but always from the same distillery.

During the 1800s, an Irishman named Aeneas Coffey invented a still that functioned continuously. Called the "continuous patent still," it did not require the repeated cleaning and refilling that was a necessary part of the operation for a pot or single-batch still. It produced a light, quite palatable whisky that was made from an unmalted grain like corn or wheat and it just kept on making alcohol hour after hour. What a glorious moment!

Whisky-makers began blending single malt whiskies from the alcohol produced in the patent still. One maker might add a single malt with a smoky flavor, another could lighten the overall taste, a third might be selected in order to introduce a touch of honey. The new process allowed them to combine the flavor they liked in different single malt whiskies with the flavors from the grains. Local merchants began to introduce different blended Scotch whisky and market them under their own branded labels. When you get to Scotland you can taste your way through at least 300 single malt and blended whiskies.

So here we are, ready for a "wee dram," which, by the way, is not a specific unit of measurement. A dram can be a half-ounce or a half-pint. It's all in the eye of the pourer. As Robbie used to say:

That's a' the learning I desire.

What's happening and where

Throughout the month of January, the Glasgow Concert Hall is hosting a Celtic Connections festival (at many different venues) that pays tribute to the traditions of Scotland. Information: 011-44-141-332-6633.

On Jan. 25, starting at 7 p.m., the Glasgow Hilton Hotel will offer a special five-course Burns Night menu in its Cameror's restaurant. The haggis will be piped in and addressed in the grand traditional manner, Burns' "Ode to the Lassies" will be recited and a malt whisky ambassador will conduct a whisky-tasting session. The cost is 45 pounds per person and early booking is recommended. The telephone number at Cameror's restaurant is 011-44-141-204-5511.

Pollock House, in the beautiful Pollock Country Park, is holding a Burns Night celebration on Jan. 25 at 7:30 p.m. The festivities will feature poems, songs and traditional food and drink in the kitchen restaurant. The cost is 18 pounds and the telephone number is 011-44-141-616-6410.

Probably the grandest party in Glasgow, open to the public, will take place on Jan. 31 at 7:30 p.m. inside the Inn on the Green, 25 Greenhead Street. Distinguished actor John Cairney will portray Robert Burns and provide a toast to the "Immortal Memory" along with songs and readings from the works of Burns, followed by a dinner that has become quite popular. The Inn on the Green has been around since the mid-'80s, when it first earned a reputation as one of the finest restaurants in Glasgow for traditional Scottish food. Recently it added an 18-room hotel, so it is now possible to combine a comfortable stay with the evening's entertainment. The Burns Night dinner is 40 pounds and the number to call is 011-44-141-554-0165.

At the end of a Burns Night party, it is valuable to reflect on an epitaph by Burns -- in fact, it's not a bad idea to keep it in mind throughout the year:

If there's another world, he lives in bliss;

If there is non, he made the best of this.

The Glasgow Hilton is appreciated for its level of service, though it is primarily a business hotel and doesn't have a strong Scottish feel. Tel: (800) 445-8667.

The Devonshire Hotel is always at the top of people's lists. Located in Glasgow's West End, it has only 12 rooms and is the choice of celebrities from around the world. It also has a popular formal restaurant. Tel: 011-44-141-339-7878.

The Burns Supper -- A Literary Feast.