The University of Virginia acknowledges it tracks applicants based on their parents' donor potential. 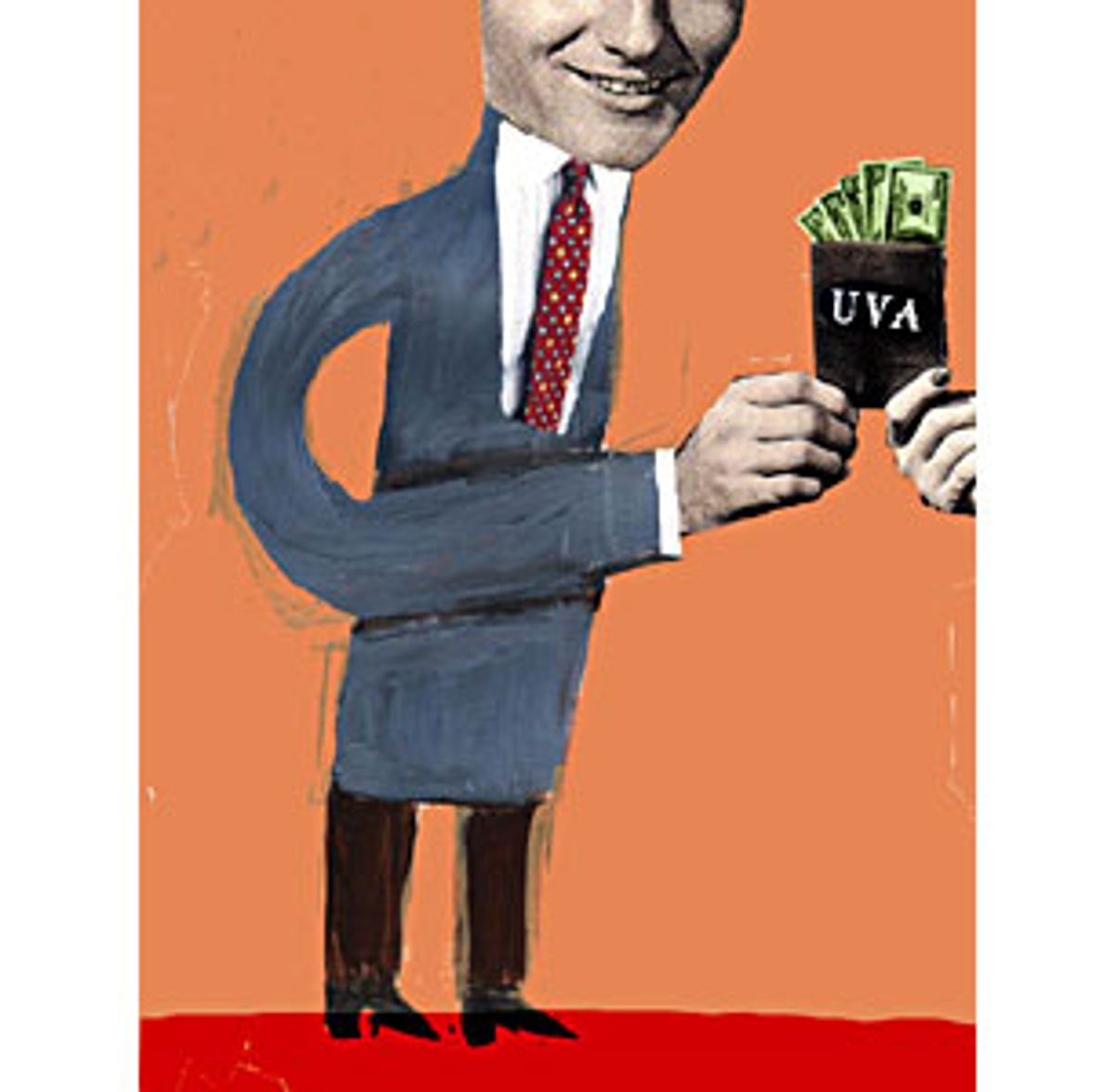 Amid heated debates on affirmative action, there has been little discussion on another form of admissions favoritism: financial. While it was long suspected that family wealth might have an impact on an applicant's prospects, few schools would ever acknowledge it. But last fall, the University of Virginia disclosed that along with legacies and friends of university VIPs, it tracks candidates whose rich parents are likely to make major contributions to the university.

The school newspaper, "The Cavalier Daily," broke the story after obtaining three memos regarding a list that defines applicants according to family worth and the probability of a big donation. The memos were sent by the development office and addressed to the president's assistant, Gordon Burris.

In some cases, the notes made specific reference to the family fortune: "-- nonlegacy son of William --, godson of Randolph Preston Pillow, MD ('42 A&S, '44 Health Sciences) -- is an heir to the Boeing Family fortune." (The dashes refer to places where the Cavalier Daily deleted some names before publication to protect students' privacy). In other cases, parents were rated by how much they were likely to donate: A for $10 million or more, B for $9.9 million to $5 million and so on.

Each year, about 400 students are put on Gordon Burris' master list to receive special consideration; along with rich kids, this record includes legacies and people who know people, typically politicians or board members. After admission decisions have been made, but before applicants are notified, Dean of Admissions John Blackburn meets with Burris. (Both Burris and Vice President for Development Robert Sweeney declined to be interviewed for this story.) The men compare lists and, in some cases, tweak a decision.

"A lot of it is maintaining good relations," says university spokeswoman Louise Dudley, who defends the list as primarily a means to inform so-called important people about how an applicant has fared. But in 1998, one-quarter of the 412 most-favored students had wealthy connections and were recommended by the development office. Of those, 20 were admitted.

Dudley emphasizes that the list is maintained alphabetically and the dean of admissions would never see information like that in the memos. While being on the list is no guarantee of acceptance, it can sway a decision. "[Burris] tells me the importance a student would have to the institution," Blackburn explains. "In some cases, I would make a change to the decision." Dudley's point is moot: It doesn't matter whether the list is alphabetized or if the admissions dean doesn't see the names on paper. Burris essentially verbalizes the list for Blackburn and prioritizes the names for him.

Ironically, the University of Virginia is not lacking for money or qualified applicants. Its endowment is a noteworthy $1.2 billion, and the school is about to complete a $1 billion campaign nearly one year ahead of schedule. On average, there are between 16,000 and 17,000 applicants for 3,000 spots in the freshman class. With two-thirds of those spaces reserved for Virginians, the acceptance rate among out-of-state students drops to about 20 percent.

Does that mean sending a bank statement along with an application or promising to build a state-of-the-art sports center will open an admissions door? Probably not. "For the most part, we're not talking deals cut for future giving," Blackburn clarifies. "We're quite leery of promises." He hastens to point out that UVA is hardly alone in considering wealth. Officials at the University of California, a prestigious public system, and Ivy League member Cornell University both readily admit that such considerations are a fact of life at any institution.

According to a Nov. 1, 1999, article in the Washington Post, Thomas Lifka, assistant chancellor for student academic services at UCLA, said the California Board of Regents banned VIP admissions ("except with special faculty approval") after ending race-based preferences in 1995.

But Terry Lightfoot, a UC admissions spokesman, says, "There are a very small number of instances in which decisions may have been influenced by inquiry by a prominent individual." Apparently, UC officially forbids VIP admits, but unofficially allows them.

Don Saleh, dean of admissions and financial aid at Cornell, says his school gives the same special consideration to students whose parents are "good friends of the university," or have the "potential of being good friends of Cornell," as legacies receive. "We make sure we are looking very carefully at that application," he explains. But, Saleh adds, the practice is really no different from other criteria used in building a class, such as ethnic and geographic diversity or athletic recruitment.

In a Cavalier Daily editorial shortly after the story surfaced, student Jennifer Schaum argued that the system of tracking violates the university's policy of need-blind admissions: "Tracking students based on their connections to wealth is degrading," Schaum wrote. "It emphasizes the financial assets students will bring to the University, rather than their academic contributions. The student's academic and personal merits should be the sole factors in admissions."

The university counters that admissions staffers are alerted to an applicant's outstanding wealth only after reaching a preliminary merit-based decision. So, at least in the abstract, the criteria for "need-blind" admissions are being met. But is there a difference if money can alter that decision? The number of candidates affected by this preferential treatment is probably few, and some might add, who cares if the occasional Boeing boy gets an extra nudge? In an age of rising tuitions and shrinking endowments, universities care. Institutions like UVA may be need-blind in theory, but in reality, they are not blind to their own needs.

Given two equally qualified students, taking one over the other based on her family's net worth is analogous to selecting one and rejecting another because of her ethnicity. However, this "broad system of preference doesn't attract anywhere near the scrutiny that race does," argues Julian Bond, a UVA history professor and the NAACP's chairman of the board. As Bond muses, "Why do race-sensitive politics seem so suspect while others don't?"