Whip me, spank me, gentrify me

A strange new romance is brewing between bourgeois taste and S/M styles. 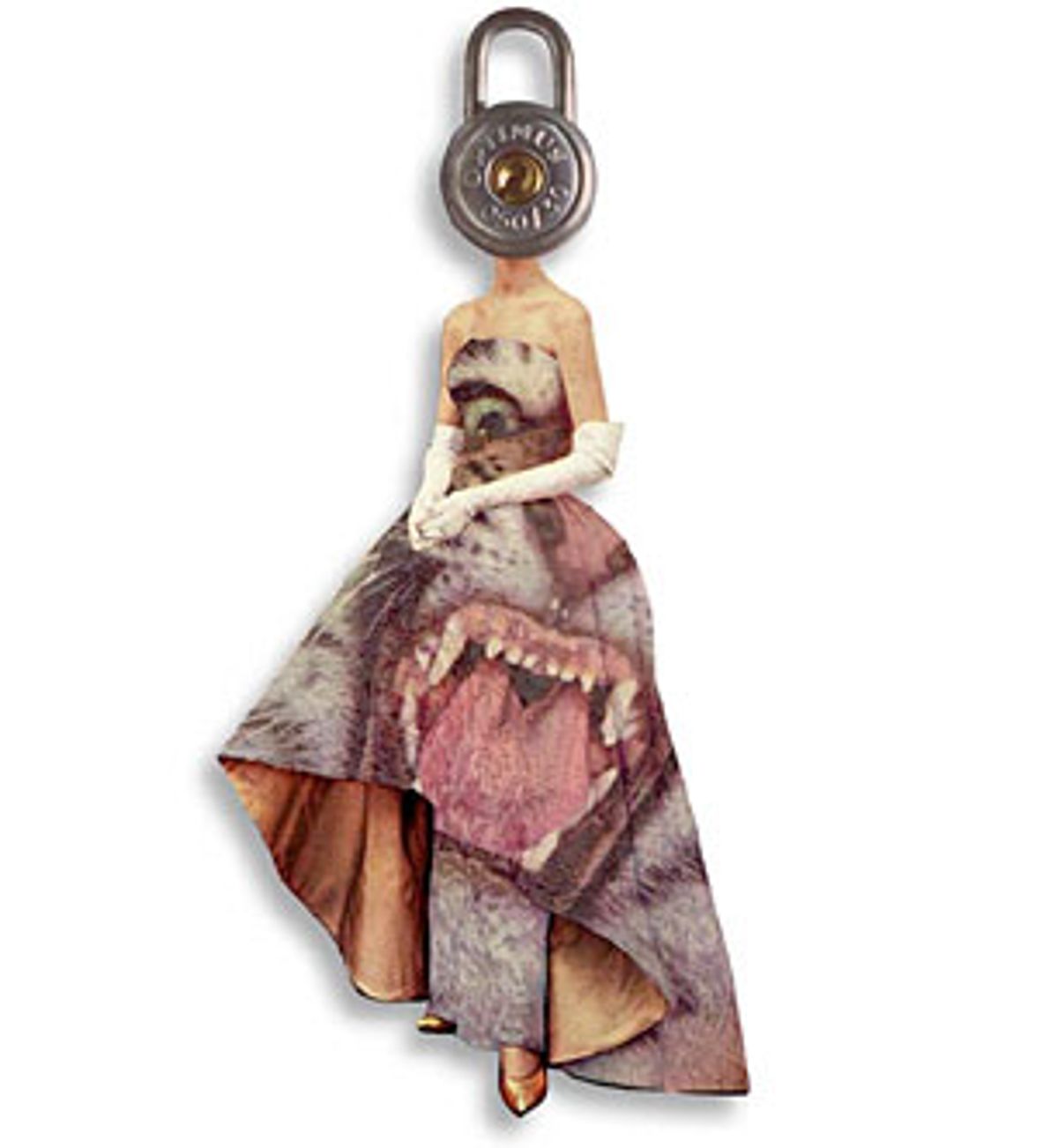 In a quiet San Francisco neighborhood, surrounded by views of tree-covered hills, a quaint little B&B welcomes visitors from across the country. Guests can choose from four well-appointed rooms in this refurbished turn-of-the-century house, all personally decorated by Elizabeth, the proprietor. While they're staying at Elizabeth's B&B -- called Differences -- guests are also welcome to use all the amenities of the house: an extensive dungeon in the basement, metal hooks tucked into lacy corners and the genuine antique bondage devices adorning the rooms. Of course, guests will also need to make their own pancakes -- B&B stands for bed and bondage here. Elizabeth doesn't do breakfast.

Like other renegade subcultures, S/M is gradually becoming gentrified. This is partly economic -- getting flogged on a Friday night isn't as cheap as it used to be. Dozens of exclusive sex stores have popped up, peddling high-end toys, devices and leatherware. A typical private "play party" runs each guest as much as $30 (this is a site cost -- you pay for the space, not the sex). Certain clubs even enforce a pricey dress code: If you aren't all gussied up in latex or leather, you don't get in the door.

This isn't the kind of gentrification one sees in urban landscapes where yuppies suck up all the warehouse spaces and formerly low-income housing. Nor can one locate some previous version of the S/M community that was less wealthy. Indeed, tracing S/M's origins back to its Founding Daddies -- the Marquis de Sade and Leopold von Sacher-Masoch -- one finds that S/M's earliest class connections are purely aristocratic.

Over the past few decades, however, S/M practices have unmoored themselves from the fringe. As specialty leather and fetters shops like San Francisco's Mr. S demonstrate, S/M is making its way into the mainstream. With its tidy, gleaming racks of sweet-smelling leather goods, Mr. S can only be described as boutique for sado-masochists -- people who eroticize pain, power games and bondage. "I wanted to go high-end with better quality goods," says Richard Hunter, who owns the store along with his son. "It's not just the hardcore leather crowd anymore. A lot of them are very middle-class and live in the suburbs. They've read about it or seen us on HBO." (The cable channel featured the shop on its cheerfully bawdy "Real Sex" series.)

This this upwardly-mobile trend in S/M can be prohibitive for people without a middle-class income -- ironic, given that many of the community's most outspoken advocates, such as well-known erotica author and therapist Pat Califia, have come from working class backgrounds. But even if a fancy corset runs upwards of $200, there are still plenty of active S/M players whose income levels barely crack five digits. Why, then, do the most visible elements of the S/M community seem to associate edgy sex play with terms like "high quality," "classy" or even that most Puritanical of adjectives, "clean"?

To understand S/M in the year 2000, we have to look at the late '60s, when the Sexual Revolution had baby boomers struggling to break from bourgeois sexual repression, hypocrisy and self-denial. Of course 1960s countercultural rebellion wasn't so different from the 1760s' rebelliousness of aristocrat-sadists like de Sade, who also loathed bourgeois prudery, hypocrisy and rationalism. Enlightenment-era libertines and boomer counterculturalists alike tried to challenge their bourgeois counterparts with sexual hedonism and social experimentation that flew in the face of rigid, middle-class values.

S/M originated as a kind of social theory. Growing out of anti-bourgeois and anti-rationalist sentiment in the 18th and 19th centuries, and anti-establishment politics in the 1960s, S/M theory revolves around the struggle to define power and consent. As S/M player "Ms. J" puts it (she chose not to be identified by her given name), "People who practice S/M learn to play with power, and become free in that play and expression. It is very threatening to the state for the populace to become so at ease -- as they are less malleable and not easily subjugated anymore, in a certain sense."

Games in which power is exchanged, granted and, most importantly, controlled, can teach players how power works and what it means to defy it. As experienced players often report, S/M games are as much about trusting your partner(s) to take or relinquish power as they are about shiny boots and luscious whips.

It's for this reason that theories of consent are at the very core of S/M thought. Playing safely with power requires a sophisticated understanding of what it means to say yes and no in an informed manner. Dozens of S/M manuals, classes and rituals are devoted to consent. And just how do we know when we've obtained it? How can somebody in restraints, ass caned to a bloody pulp, indicate the difference between a happy scream and an I'm-ready-to-stop scream?

It's from S/M theory that we've developed the concept of "safe words:" established phrases that signal the end of a scene (many people use the easy-to-remember "yellow" to request a slow down, and "red" for stop). More importantly, S/M theory has inaugurated a whole new way of engaging in sexual communication. In the S/M community, communication is at the root of all sexual satisfaction -- you can't get consent to shock someone's cock with an electric wand without a fairly detailed discussion beforehand about how you plan to do it.

Many players today consider their sexual adventures to be in the anti-authoritarian tradition of S/M theory. Artesia, an S/M player in the San Francisco area, believes that S/M is becoming more mainstream as 1960s hedonists settle down. She sees gentrified S/M in the context of "the greying of the baby boomers, who have always embraced their sexuality and are educated enough to advocate their explorations."

Like hippies who grew up to found "socially responsible" corporations, many S/M players have moved from life on the fringe to having their own social institutions -- albeit ones founded on fairly radical post-'60s principles. One of the nation's oldest S/M organizations, The Society of Janus (SOJ), was founded in 1971, around the time the counterculture was beginning to feed into what today's pundits would call sexual politics. Devoted to "education and support," SOJ operates somewhat like the feminist consciousness-raising groups of the '70s. One attends SOJ meetings to share experiences in a relaxed environment, and, as the membership brochure states, to learn more about "sexuality based upon a safe, consensual, non-exploitative transfer of power between partners." This language is deeply influenced by 1970s feminist ideals of safety and nonexploitation in personal relationships.

During the Reagan Era, S/M became a new form of safe sex -- especially in the queer community. Hunter, from Mr. S, speculates that many gay men came to appreciate S/M after AIDS put limits on queer sexual experimentation. "Because of AIDS, many people were trying to find alternatives that would intensify sexuality and that would allow them to play in a way that wasn't dangerous. I think that opened things up. They thought, Hey, I'll just tie him up.' Rather than stop having sex, they tried something else."

As a result, what constitutes contemporary S/M is a weird combination of bourgeois ideals -- safety, education, taste -- and what could be called the original ideals of S/M -- radical transgression, a hedonistic anti-work ethic, absolute sexual freedom and a strong distaste for political authority. One finds seemingly incompatible belief systems mingling to create Dossie Easton and Catherine Liszt's kinky bible, "The Ethical Slut," and organizations such as Quality S/M (QSM), an elegant and efficiently run mail-order erotica bookstore and S/M education facility where one is invited to purchase "classy" fetish stories about topics such as coporophilia and enslaving oneself.

Odder still to an outsider would be the experience of attending an S/M seminar at QSM's San Francisco warehouse, where a room full of well-dressed people in orderly rows of folding chairs watch politely as a well-known "dominant" demonstrates how to torture nipples correctly and why it's important to employ bondage devices that won't cause nerve damage. To avoid appearing "unsafe," players plan their taboo violations and transgressions to a 'T.' It can be too much -- Joe, a member of the coordinating committee for the Third Annual Leather Leadership Conference, notes ruefully that "the S/M community is, at times, overwhelmingly geeky. Players will spend hours and days debating finer points of flogging safety instead of just getting together and having fun."

Given the lack of law-breaking and general air of wholesomeness in the S/M scene, it's no wonder that Jack and Jill Suburb have come to join the fun. The question is, what gets lost in the translation when S/M values begin to percolate into the white-picket-fence world of middle America?

Outside the community, S/M has become what SOJ orientation director Maryann Brown jokingly calls "stand and model." There are vinyl bodices and soft purple floggers for frustrated housewives, nipple clamps for uptight businessmen and leather-and-studs erotica for teenagers who have read all the romance novels at B. Dalton. People are dressing up and acting out, some say, but they aren't really freeing themselves or challenging the social norms that say sex should be labeled, contained and neutralized. Put another way, the mainstream offers S/M practice without S/M theory.

Why can't S/M theories of power and consent catch on in the same way that latex skirts and spiked collars have? Because real inquiries into power might well lead one to question authority outside the bedroom. Newly acquainted with the liberating notion of consent, people may balk in situations where theirs is not given. Workers familiar with S/M theory, for example, might suddenly yell "red!" and walk off the job when their bosses force them to engage in labor they did not consent to perform. Ideally, power in the S/M community is given consensually, not taken by force. When power and consent go hand in hand, people are far less likely to sit back and accept what the powers that be tell them to do.

But gentrification has taken the social challenge out of S/M. And many S/M community leaders like Elizabeth worry that shopping-mall S/M will actually result in dangerous sexual de-skilling: people buying toys that they don't know how to use and injuring themselves or their partners. Or worse, people could attempt sex games they've read about, but, without the ability to communicate consent, end up reproducing all the ugly realities of a sexual culture still based on coercion, secrecy and shame.

For those who delve into the S/M community to learn sexual theories as well as where to buy some hot cock shackles, there's much more to S/M than sex. It's about forming a community where bourgeois prudery doesn't rule all, and sexual expression is articulate, graceful and consensual. Ruth, a player in the scene for roughly four years, confirms that "there's more to the scene than play. These are people with whom I can be myself. I don't have to worry that talking about sex will offend them. I don't have to be afraid to hug them. I have much better friends now than I ever did before."

Sexuality is, finally, about forging community and cementing human connections through pleasure. Maybe in S/M theory -- which has not yet been completely gentrified -- we discover that human relationships are really the point. And that's why power must be used so carefully.

Annalee Newitz is a writer. Get the gory details at Techsploitation.