A match made in Graceland

He wore white patent leather shoes and I still married him. 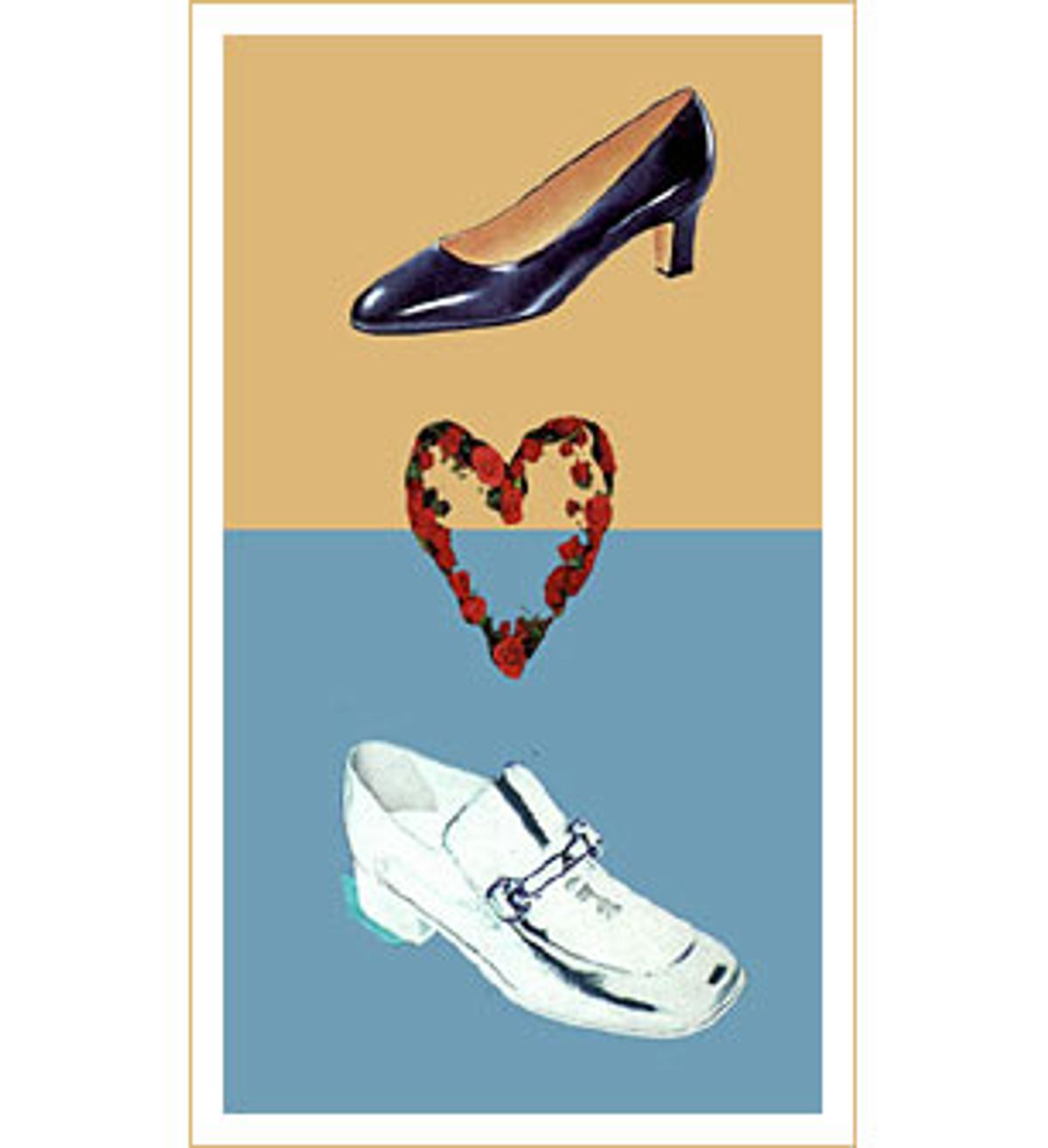 We shouldn't be married. Really, there is no way that Phil and I should be celebrating 14 years of marriage. As different as we are, it's amazing that we even went out on one date. But we did. Went on three, in fact, before he moved in.

How weird is that? I'll tell you: He had white patent leather shoes, wore them with a straight face. And I married him.

It all started when I moved back to Michigan to get my life together after it fell apart in San Francisco. My folks were tired of me showing up on their doorstep every time life got too crazy for me in San Francisco. I'd done this a few times in the two years after my divorce.

They asked my uncle to get me a job at the Ford plant. This uncle hadn't forgotten that I was one of the leaders of a huge demonstration at Ford World Headquarters during the Vietnam War. He got me a job in one of the toughest plants in Michigan. We made trucks, worked 10 hours a day, six days a week.

This factory was like my purgatory, a place where I planned to suffer until I had paid for my sins and decided what I wanted to be when I grew up. My family thought that the job would either help me or discourage me from returning home the next time my life went into a skid.

I was 27 chronologically, but a teenager emotionally. I still believed that the perfect man would come along, adore me, take care of me and actually move me into a home with a white picket fence and a huge wooden porch with a swing.

The only part of the fairy tale I'd managed at that point was a relationship with a gay man. I was at the stage of swearing off marriage altogether when I met Phil. He was 36, frustrated and bored in his first marriage. I recognized a few emotional touchstones there, but we definitely didn't match.

He was (and still is) from Tennessee and his accent alone would normally have sent me in the opposite direction. He drank bourbon and Coke. I smoked pot. He wouldn't see a Jane Fonda movie. I had been at several demonstrations where she spoke. He listened to Elvis. I listened to the Stones. Phil was a foreman for Ford Motor Company. I assembled trucks on the line.

While he ran the shop, I got stoned. He was neat. I wore my hair in a grown-out brush cut. I got out of working as often as I could, and even whistled at the men on the line. Half of me was still very San Francisco, the other part was working in a factory nicknamed "Little Kentucky," partly because it was one of the last plants to hire minorities, including women.

I was missing wild nights dancing at the Stud on Folsom Street, and I was working in a plant that almost had to shut down the day Elvis died. (On that fateful day, I came to work and heard some people saying, "The King is dead." I tried to think of which countries still had kings and why all these people would care if one died. People were calling in sick or having to leave the line to cry or faint. What's the big deal? I'd already been through this with Jimi, Janis and Jim. I felt like I was in another world, a time warp or something.)

By the time Phil asked me out, I was a union gal and really into my newest incarnation -- a proud proletarian. Nobody expected me to date a foreman. I had just broken up with my latest bad
choice of boyfriends, a relationship made in hell. My family hadn't liked him much. I'm not sure if it was his bisexuality, drug addiction or his having been in jail, but this was one time when they were glad I'd screwed up another relationship.

They were not, however, prepared for Phil. When I was a kid, my parents never allowed us to use racial slurs, but calling someone a hillbilly was fine, and Phil was obviously a "billy," as my mom used to call people from the South.

I decided to go out with him because I knew that he genuinely liked and respected women, which is a rarity anywhere, but especially in the factory where we worked. He never made passes or lewd comments. He made eye, not breast, contact and never patronized women. He was the only man in the place that didn't seem bothered that women had entered this rough and greasy male domain.

When Phil showed up to take me out on our first date, I'm not sure what I regretted more, smoking a joint of killer weed before he arrived or promising my family that I'd bring him over to meet them before we went out.

Some surprises come wrapped in brown paper or cellophane. Phil was packaged in polyester, and I do mean polyester. Sure, it was the late-'70s, but I'd never been attracted to a man who wore anything but Levis, khakis or, at the very least, a material that occurs in nature.

He also wore pointed cowboy boots, long before they were in style. I thought I'd be embarrassed by them, until I saw his dress shoes. Prepped for a night out, he looked like everything I'd made fun of for most of my life.

He had on white patent leather shoes with gold buckle-like things on them. He was wearing white polyester flared pants that were a bit short and a black polyester shirt with white polka dots. I wanted to laugh because I was high and cry because I was bringing him over to meet my family.

I am one of five daughters and we've been known to crucify people without them ever feeling the nails going in. We were merciless. It's a catty telepathy: Our putdowns often were screamed across the table with a silent look that only we understood. Our victims, otherwise known as dates, were unaware of being inspected and graded. And here I was, about to bring over another unsuspecting nice guy and he was dressed like this.

Miraculously, everyone behaved. I think that Phil's outfit was beyond anything that my family was prepared to deal with. It would have been almost redundant for them to make fun of him.

Phil, in his typical, gentlemanly way, invited them to join us in the surprise he had planned for me. Everyone except my younger sister Annie declined. She was underage, but Phil let us know that he was connected at the club where we were going and he could get her in.

Phil was correct when he guessed that this date would really impress me. It turned out that one of Phil's closest friends was an Elvis impersonator. His creativity was immediately apparent -- he spelled his name without the "E." Lvis also wore a cape and a huge belt. Unfortunately, we were late, and even though Phil was connected at the Blue Bonnet bar, we had to stand in the back. This was a shame because I could not see over some of the hairdos, men's and women's in this case.

You know how it is when you're standing next to someone and both of you are laughing inside so hard that your shoulders shake? Well, this is what happened to my sister and me. And the more we tried to hold it in, the more our shoulders vibrated against each other. While Lvis was singing "Hunk of Burning Love," he began to toss out hankies that his mother had embroidered. We ran to the ladies' room to avoid wetting our pants.

The fact that we had a second date and that Phil moved in with me on the third is still a mystery. I was living in a flat that was decorated with some of my favorite items: a brass hula girl lamp in which the girl actually did the hula, three stolen plastic pink flamingos, a few beers and some cheese in the refrigerator and an electric train set. Phil's house was like the ones I'd relieved of their pink flamingos.

A few days after he moved into my flat, he went out and bought a matching bathroom set; I'd never had one before. The shower curtain matched the cup, toothbrush holder and even the rugs. I was able to talk him out of the toilet seat cover, but he was disappointed. He wanted to buy things for me. He was going to fix things up for me. He was going to take care of me.

It still embarrasses me that I believed I was so much better than him.

Love didn't blind me completely, however. I did have some minor changes to suggest for him.The cowboy boots could stay, but the pants needed to be Levis and a little longer than his other pants. (I had to call a girlfriend from the plant to ask her how to wash polyester, which he still wore to work.) I talked him into some cotton shirts (before I found out they had to be ironed). Western music was okay in moderation, and I found music that crossed over with rock and roll, like Marshall Tucker, Bob Seeger and Emmylou Harris.

From the beginning, Phil was open to whatever music I listened to and whatever clothes I wanted to wear. Unconcerned with fashion or correctness, he truly accepts people as they are. He is unaware of the packages people come in; he never knows if someone is rich, racist or Romanian. He did tell me early on that he liked long hair and I told him, sure, he might look cool with his hair longer. That was the first and last suggestion he ever gave me on my appearance.

He does wear jeans now, although they are still an inch too short and I suspect they have polyester in them -- they don't seem to fade over the years. I have even gotten used to the tape measure on his belt. I just figure it is my good luck that I am asked to ask my husband -- every day if I want to: "Is that a tape measure you're wearing, or are you just glad to see me?"

The white shoes are gone, but not forgotten.