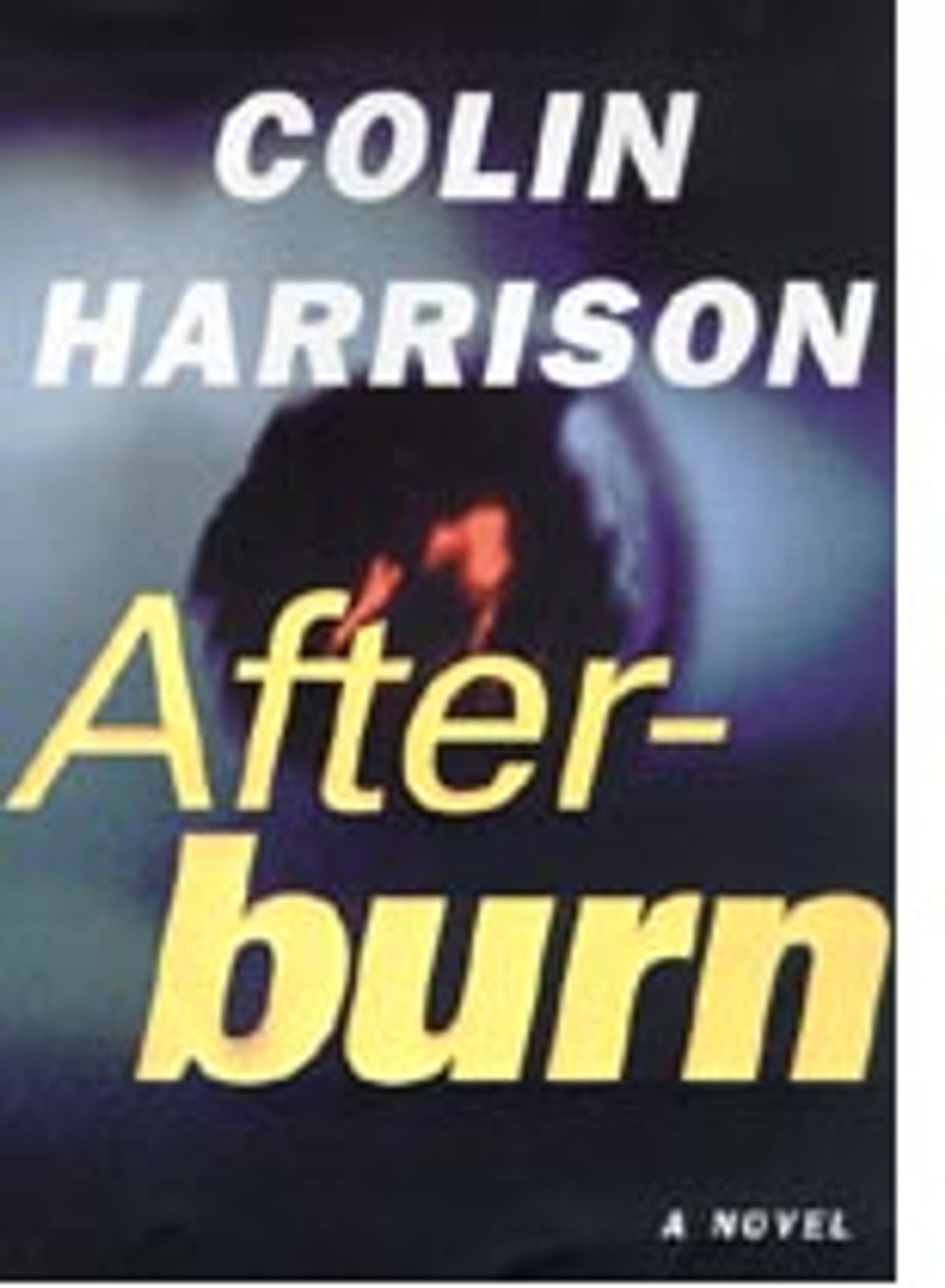 If you like your novels mean, tough, ugly and male, you're going to love "Afterburn," Colin Harrison's latest exercise in New York noir. Harrison is deputy editor at Harper's magazine, a creamy stylist and crack storyteller whose previous books, "Break and Enter," "Bodies Electric" and "Manhattan Nocturne," established him as a master of the "literary" thriller. I put the word in quotation marks because -- let's be serious -- Tolstoy he ain't.

"The drill went into the outside of his left ankle," Harrison writes, "just above the boot. It was worse this time, the bit grinding into the joint capsule until it punctured through the tendons on the other side, then continuing through the flesh until the spinning tip spurted through the inside of his ankle. 'Oh, God, please,' Rick cried, gripping the table and squeezing his eyes. 'Oh! Fuck, fuck!'"

Speaking of that: "He'd routinely fucked her for ninety minutes straight, like running ten miles, the sweat pouring off his face and chest, riveting down his arms, soaking the bed  And she could take it, she could take anything he did, any position, any degree of force. If you remembered that, it kept getting more mysterious." Harrison writes about sex with a ponderousness that might be expected from the husband of Kathryn Harrison, author of the incest memoir "The Kiss": "The idea that he had fucked her into unconsciousness was so exciting that he just blasted himself away into her."

Well, all right -- this is what you want in escapist fiction. "Afterburn" tells the story of three lost souls whose lives entwine in a web of crime against a backdrop of millennial hedonism, money-grubbing soullessness and cruelty. Charlie Ravich is an aging New York electronics executive, a former Air Force pilot and Vietnam POW haunted by guilt for his role in the war and desperate to continue his genetic line after the death of his son from leukemia. Christina Welles is a cool, brainy Columbia dropout and small-time grifter, haunted by a childhood rape, "insatiable" lust and what she worries is her "hard heart." And Rick Bocca is Christina's iron-pumping former boyfriend and partner in crime, haunted by the fact that Christina took the rap for him after a failed truck hijacking and now has the mob on her heels. Everyone in "Afterburn" is haunted by something -- Harrison's New York is a barren, hopeless place. He seems to be making a moral point, but damned if you can tell what it is amid all those power dicks and severed limbs.

"When I die," Christina reflects, "my space will be filled right away, others will sit in the subway seat, wear the shoes I would have worn, bite the apple I would have bitten. Like I was never there." Charlie, too, is obsessed with his pending oblivion: "One more child, God  Give me one more child. Correct the flow of time, God. Let me roll the dice again." And Rick -- no Einstein, as the saying goes -- ponders the nature of truth and lies and comes up with "a web of maybes. Most of them too complicated. He'd learned that if a plan had too many twists and turns it usually broke down."

It's a measure of Harrison's skill as a writer that "Afterburn" doesn't break down, despite the popcorn philosophy and endless orgasms of its characters. Harrison is an old-fashioned novelist with a gift for sharp characterization and a sense of pace that keeps you reading even when you know it's all hokum. Just skip the ruminations and go for the thrills. As Harrison writes, "Every girl has a story  but you can ride only one at a time."