Our roving connoisseur uncovers the finest hotel on the planet -- in Patagonia. 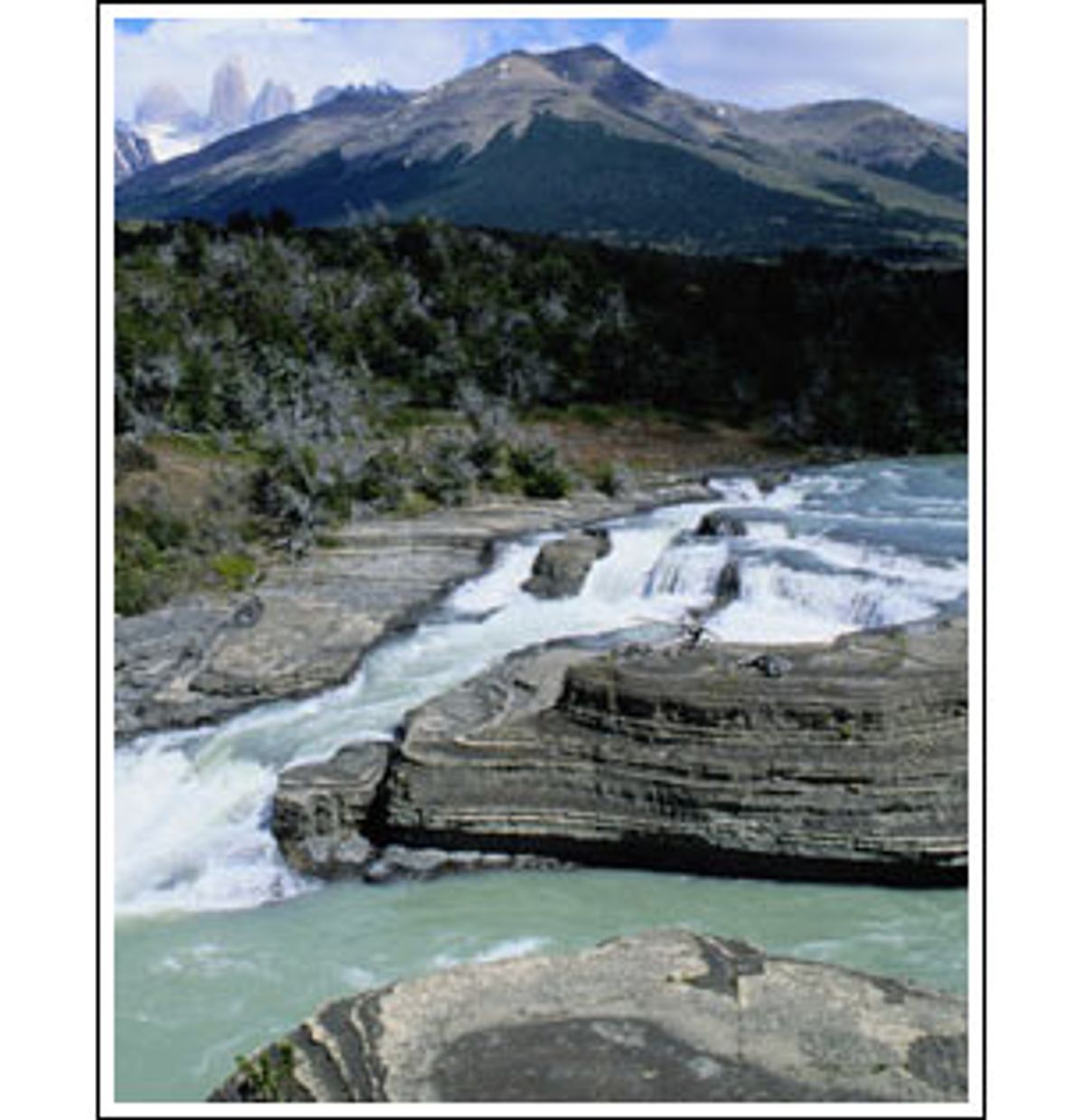 I have just been traveling in deepest, wildest Patagonia. While doing so I stumbled upon a small and simple earthly paradise, an Elysian place of beauty and happiness and peace in which I and my two companions found sublime contentment and serene enjoyment. Although I am more than happy to describe every detail of this place and how I found it, and although in the following paragraphs I will try to do justice to the place -- it is a country hotel, in the valley of a river that is locally well known for its speckled brown trout -- and so make it every bit as alluring for you as it has lately been for me, I will not, I am sorry to have to say, tell you its name, nor exactly where it lies.

I find in deciding to do so that I have become ensnared by the dilemma that all in this trade sooner or later confront: that what makes some places so very special is the public's general ignorance of their existence. And so in all candor, and while it must be in wholesale conflict with whatever principles guide the odious business of travel writing, I have to declare that I simply do not want the general public, despite my warm regard for democracy and prosperity and freedom and such other excellent modern notions, to go there.

Not at all. I want Keep-Out notices posted for miles around, all suggestive finger-posts and hoardings and direction signs taken down, all telephones disconnected, a clutch of moats and ha-has dug, fences of barbed wire, chain-link and chain-mail put up and (since for unexplained reasons in Patagonia there are plenty nearby already) a few minefields strewn, to keep the unwary at bay.

Not, however, that I want absolutely everyone to be ignorant of the place -- if I wanted that, I wouldn't be writing about it at all. But I am sure I'm not alone in thinking that the only people whom we want to turn up in those special places that we discover serendipitously, are people who are more or less -- to put it bluntly -- like us. The common herd may come and go as it pleases, but only our friends, or people whom we are sure we would like to be our friends, should come. The mines and the ha-has are for keeping out the herd -- the rest we cordially invite, to enjoy what I and my two companions have lately found so transporting a delight.

So within the following sentences I have buried clues, a modest sufficiency of pointers that are neither too obscure nor too cryptic, from which I trust some substantial percentage who have not yet tired of this preamble may be able to work out most of the unstated elements of the story. The correct answer -- the exact name of the place, which is to be found on any good map -- can be e-mailed to my esteemed Salon editor,who will in turn send full details of the hotel to readers who, he and I feel sure, will by virtue of having taken the trouble to solve the little mystery be like-minded enough to go off and help keep this demi-paradise in business.

The hotel is in Patagonia, as I have mentioned. I first heard about it from a young Canadian whom I had met in the Antarctic. It was an old Scottish-built ranch, he said, set in splendid countryside; it had big old rooms and fireplaces and the best of food and wine, and there was plenty to do -- fishing, riding, playing gaucho, pretending to be a Patagonian estancia-worker. He gave me directions: I was simply to drive up the main road from the docks, Route 9, until I spotted the 135-kilometer marker post. A few yards after that, just before a small bridge, there was a dirt road on the left. The estancia was half a mile down the road; it would be impossible to miss.

The day I set off north was classically Patagonian, with a huge sky of ragged clouds, a terrific westerly wind howling across the plains, the kind of temperature that zealots call bracing. The wind made controlling the car difficult at first, and each time we passed another vehicle, usually a vast mutton truck heading for the nearby frigorifico, the dust it kicked up bombarded our windshield like shrapnel -- drivers in these parts go through two or three a year, and it is said that you cannot buy windshield insurance south of the 40th parallel.

Once past the outskirts of town, and past the airport and its weather-beaten warplane hangars, there was nothing -- just mile upon mile of scrub, the small patches of vegetation straining wildly in the gale. The fields were bordered by endless miles of barbed wire, from which hung clumps of wool, and against which occasionally lay the skeleton of a dead animal. From time to time we passed a gaucho herding his sheep: He would be sitting casually on his horse, swathed in a woolen poncho, his guitar over his shoulder, his dogs running behind him to keep the animals in check.

Once in a while, too, there would be less familiar animals -- the long-necked guanaco (a cousin to the llama, the vicuna and the alpaca, but which distinguishes itself by liking to spit, and is possessed of a deadly aim), the flightless rhea known as the nandu (which runs along the road in front of the car stepping high and flourishing its skirts like a can-can dancer), the bright Alice-in-Wonderland-pink flamingo and, soaring high above us and all-too-rarely, the Andean condor.

All of which excitement made us very nearly miss our exit at milepost 135. But we slewed the car dangerously across the gravel, rattled across the wooden sheep-barrier grid called a guardaganado and made for the grove of gnarled trees that surrounded and protected the farm and its outbuildings. We pulled up outside the main house -- a large twin-gabled mansion, its sidings painted yellow, its tin roof red, its door solid, wooden, well-varnished. There was a flagpole outside on the lawn -- a memorial, said a plaque, to the Scotsman Alexander Morrison Mackenzie, who had founded the estancia in 1891.

Old Mr. Mackenzie's great-grandson, John Dick, runs the 20,000-acre farm now, with 5,000 head of sheep, a few hundred Angus cattle, a few hundred llamas. But his decision to turn the homestead into a hotel was forced upon him, he says, by the whims of politics. The entire farm had been expropriated during the 1970s, when on orders from the capital many of the larger estancias were handed over to the local campesinos.

But the caprices of Latin American politics -- in this case, a coup d'etat and a nasty assassination a thousand miles away -- allowed the former owners to buy it back 15 years ago. Thus it was that John Dick and his mother, Marietta, decided that in order to keep the old place standing and the farm running at a time when, for economic reasons, farms all over Patagonia were closing forever, they would have to move the family into one of the outbuildings and rent out the eight bedrooms of the old homestead to passing strangers.

And it was as passing strangers that we arrived -- and stepped through the well-varnished door into a world that it seemed old Alexander Morrison Mackenzie had never left. The rooms have heavy Victorian furniture, all antimacassars and samplers and faded sepia pictures on the walls; there is an ancient Victrola that plays 1920s dance music, a Zenith radio with Hilversum and Schenectady on the dial, and from which antique music mysteriously (since there is no local radio station) also seeps. The bedrooms have huge old brass beds, English hunting scenes (slightly foxed) on the walls, baths with great brass taps and iron stains on the enamel.

In the kitchen is a wood-burning two-oven solid iron range, built in England in 1902 and shipped out at vast cost -- and which baked the finest bread I have ever tasted and roasted the sweetest lamb we have ever known. In fact, it was as we were sitting later that night -- it is still light in Patagonia until 11, at least -- in front of a fire, drinking an old local cabernet and slicing lamb so tender it might have been made of butter, that we declared that we could recall no finer moment in any hotel, inn, hosteria, residencia, caravanserai, way-station or motel on the planet. And the slim guestbook, when we read through it, suggested much the same: that all who take the trouble to come, find the place utterly adorable and vow to come back, whatever the distance, however severe the cost.

But it was after dinner that our fate of eternal enslavement to this magic place was settled once and for all. The estancia's gauchos had saddled up three horses -- sheepskin on top of the leather, for added comfort -- and had given us vague directions to the fastest, flattest plains. And so we set off, down over hills and then onto the flat where we spent an idyll riding like the wind -- scaring up unwary sheep, raising flocks of ducks and pheasants into the air, splashing in the shallows of the great and (according to local lore and language) mysteriously sorrowful trout river that courses through the farm's lowlands.

For an hour, as the sun inched its way down along the horizon, and as the stars began to shine over the immense emptiness of the property, we rode and rode, suffering happily for all that cabernet-induced indolence before the fire -- until finally we turned for home, toward the little pool of light among trees where old Mr. Alexander Morrison Mackenzie, late of sheep-farming in Ayrshire and the Falkland Islands, had made his final family home.

And it is as home, more than anything, that the old estancia seems to be best remembered by those lucky enough to find it, and to stay. The beds were soft that night, the plains were soundless except for the occasional rattle of tin roof in the now-abated wind, and at breakfast the next day there was more fresh bread and eggs and milk, and smiling cooks to help with the packing. And Marietta was happily on hand to say: "No need to pay now, if you don't wish -- just send me a check when you get home. Anyone who makes it here is someone to trust, I'm sure."

As I am equally certain. Those who have worked their way through the myriad clues above, and who then manage to find their way to one of the most pleasing little places on earth, can, I have no doubt, be trusted in all ways -- to pay their bills, of course, but much more importantly, to preserve this lonely Patagonian farm as a paradise, and keep it as their own special kind of secret, too.