You'd be happy to buy online, but you know you'll never make contact with the delivery guy. 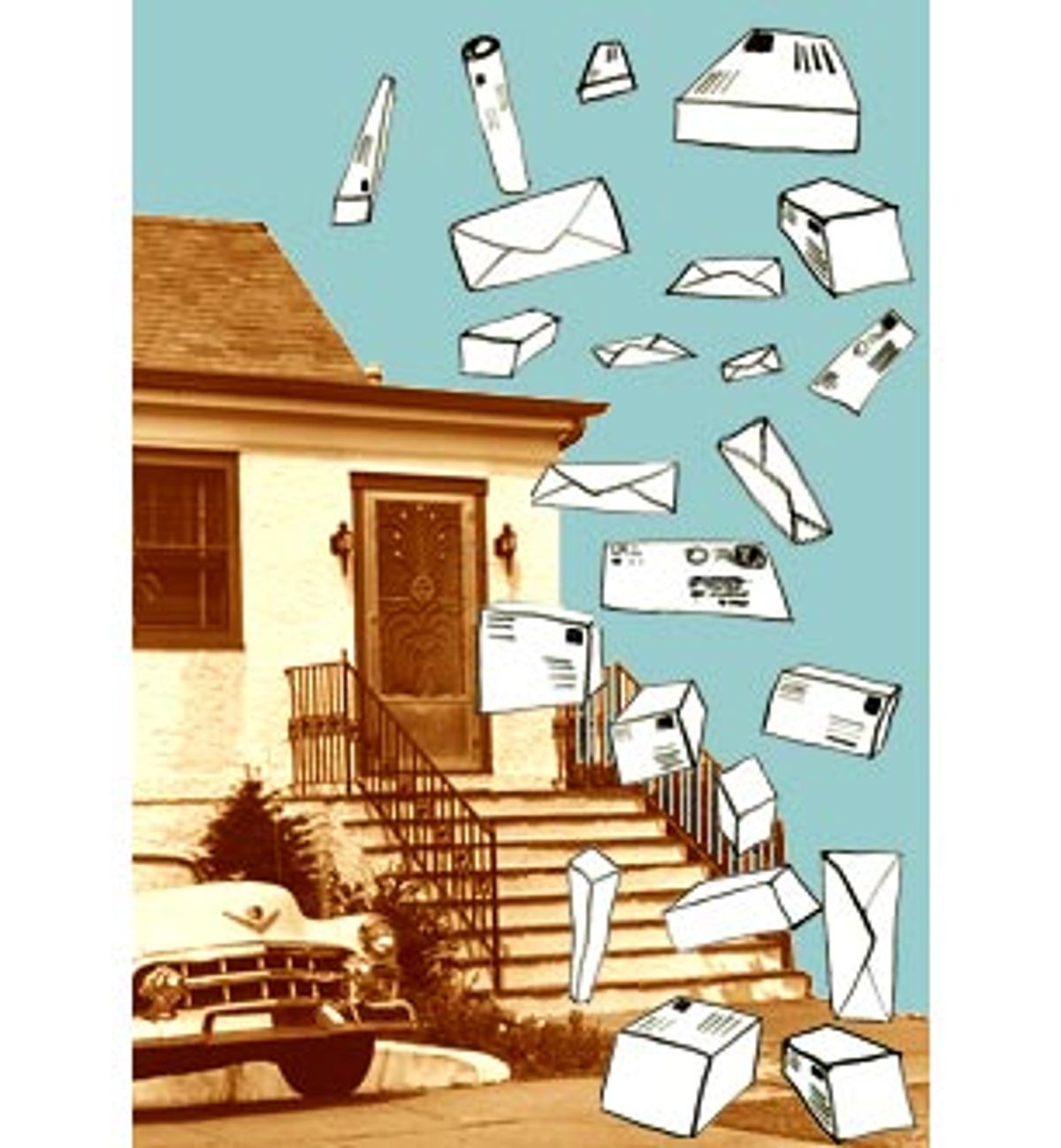 Your mom just called and invited herself over for dinner. A bottle of vodka sits in the freezer and your only pan is barely big enough to make ramen. You don't have time to make a run to the department store and get groceries. Where do you turn for help?

Webvan, Peapod and other online grocers can drop off the ingredients for a nice fettucine Alfredo, but you need cookbooks, pots, a clean shirt. Kozmo will deliver videos, snacks and other stuff for the bachelor lifestyle in less than an hour -- but not wine glasses or fresh towels or the kind of stuff that might impress Mom. Besides, you're still at work and wouldn't be home to get a delivery. You're in trouble.

Soon, however, Mom's surprise visit may not induce a panic attack. A bevy of start-ups are focusing on how best to deliver the goods you buy online. Shipper.com will soon offer same-day delivery of housewares, clothing and all kinds of stuff that you might pick up at a mall today. Already, Streamline.com is delivering groceries and providing door-to-door service for dry cleaning, shoe repair and photo development on a weekly basis to the suburbs of Boston and Washington. (It has plans to expand, starting in New Jersey and Illinois.) And several firms are developing secure boxes to receive deliveries when you're not home.

What all of these companies are attempting to do is make the physical logistics of e-commerce really work. Nobody likes coming home to those yellow sticky notes -- and almost nobody can wait around the house all day for a delivery. We need better solutions.

"People love the front end of the Web," says Carter Griffin, co-founder of MentalPhysics. His Vienna, Va., company is designing secure delivery bins that will accept goods when you're not around to sign for them. "It's a sexy way to shop. But the fulfillment mechanism often breaks down, making it an ultimately unfulfilling experience for a lot of consumers."

As anyone who has ever tried to hold down a job and take possession of something sent via the United Parcel Service (UPS) knows, the ability to receive packages at home when you're not there would make buying things online a whole lot more appealing.

Streamline takes a novel approach to solving the "Sorry we missed you" problem. For $30 a month, the company will not only schlep your stuff across town, but will install an electronic lock to your garage or basement and lend you a fridge or shelves, so they can make secure deliveries even when you're not home. It's like giving the milkman a key, but only to your refrigerator, says Kate Carswell, a Streamline marketing manager.

Rather than give couriers access to your home, MentalPhysics's approach is to attach a tamper-proof box to your house; the box's lock will be wired to the Internet, and when you make an online purchase, a temporary access code will be assigned to the courier. Once he or she has opened the box, the code will be deactivated.

It was only last month that online holiday shoppers were burned by the delivery problems plaguing e-commerce sites. Lots of Web retailers had to turn away last-minute shoppers wanting guaranteed delivery, and both Amazon.com and Toys 'R' Us failed to deliver some promised packages by the big day. Toys 'R' Us now faces a lawsuit brought by parents who ordered by December 14, the site's Christmas delivery cutoff, and didn't receive their toys before the holiday.

E-commerce delivery companies like Shipper.com hope to bridge the gap between shoppers' demands and current delivery shortcomings. Though it's not ready to name its partners, Shipper.com says it will play middleman for a number of retail merchants, stocking the merchants' most popular merchandise in Shipper.com's geographically dispersed warehouses. You'll be able to place an order from your favorite department store and have it delivered direct from a nearby Shipper.com warehouse within a few hours.

"We want to put fewer people on the sales floor, and more people in trucks," says Andrew Krainin, Shipper.com's senior vice president of marketing. Those people in trucks will likely be working some odd hours, since extending delivery times beyond the traditional work day will be important to pleasing customers. But the service will need to be pretty popular for the company to be profitable. Shipper.com spends about $20 on each delivery, and charges less than $10. By Krainin's own admission, each truck must make 30 to 50 deliveries per day; otherwise, their trips aren't worth it.

Upstarts like Shipper face some pretty stiff competition, too. UPS delivered 55 percent of the nation's holiday packages in 1998, according to Zona Research. To maintain that lead, UPS is retooling for e-commerce: It now provides a cash-on-delivery service for companies like Gateway, collecting payment for computers as it delivers them and depositing the funds directly into Gateway's account. In Europe, UPS even hired a staff of professional musicians to ensure that Fender guitars arrived in tune.

This spring, $17 billion shipping colossus Federal Express will expand its "Quality Home Delivery" program from one city to more than 20. The program expands delivery options so that you can schedule a time to meet the delivery van -- even in the evening.

The United States Postal Service has an obvious advantage in the home delivery game. The USPS already has a box attached to your home where it can leave small packages -- and, by law, no one else can make deliveries to it. Still, the postal service is trying to better facilitate e-commerce. About one-quarter of all online purchases are returned, so the USPS now lets e-tailers offer the option of pre-paid return labels; a customer returning merchandise can print them directly from the USPS Web site.

What all of these shipping companies have in common is a recognition that if they can make it easier for online shoppers to get their goods, they could transform consumer habits -- and make a lot of money in the process. "People are used to shopping in stores," Krainin says. "We need to get them to think differently."

Better package-traps might help. DVault in Highlands Ranch, Colo., has created a curbside box that works like a public mailbox, with a pull-down handle that opens the box enough for a package to be dropped in, but not so much that a wayward hand can lift your deliveries. And, according to an August, 1999, Wall Street Journal article, Christopher Kaletka, a high school chemistry teacher in Cleveland, is working with aerospace engineer Pat Sebastian to develop a box that can be buried in people's yards.

Despite an initial price tag of about $300, MentalPhysics' Griffin expects such bins will become as common as a coffee maker -- "appliances for the millennium."

"It's a pretty awesome idea because one of the more costly aspects of shipping is the 'not-home phenomenon,'" says Rob Carter, CTO of FedEx. "The delivery box is a great invention."

M. Eric Johnson, a management professor and supply-chain expert at Dartmouth's Tuck School of Management agrees, noting that the boxes would be perfect not only for deliveries, but also returns. "If you could deliver when people aren't home, then you could deliver at night. That's a beautiful thing, especially for shippers."

Still, consumers stand to gain the most. Rather than worry if your cookbook and pots will arrive before Mom, you could simply come home, empty your coded bin, and get to work.

"If we have the ability to have things delivered when we're at work, without having to think about it, it changes the way we think about shopping," says Tom Frey, a senior researcher at the DaVinci Institute, a futurist think tank in Longmont, Colo. "It ties in with the freedom that we're all trying to achieve. It buys us time. It puts more hours in our day."

Yeah, you may be running to the store less, but not just because you can have anything delivered; all those delivery vans means that traffic could get really hairy. Expect more trucks, more traffic and more pollution in the next two years, says Dartmouth's Johnson.

"If you think about the average person in the Bay Area, they stop by the store for groceries on their way home from work," Johnson says. "If you order from a service, then that's an extra trip ... If you have multiple delivery agents, each delivering some fragment of the Web purchase, then it could be much worse. If people continue shopping, and order from several deliverers, then the traffic will increase. In the short term, you can safely say that it will be much worse."

But if e-commerce really takes off, some stores are bound to be replaced by warehouses. (Or ware-mansions: Webvan's distribution centers take up about 300,000 square feet -- that's about twice the size of your average Wal-Mart.) Just as successful online grocers will cut into the business of local supermarkets, companies like Shipper.com hope to trim America's dependence on malls.

Few would cry over the loss of a strip mall, but technology critics say bigger issues are at stake. "If e-commerce begins to substitute for neighborhood and around-town shopping centers, then what will happen in American life is the decline of community," says Langdon Winner, a political science professor at Rensselaer Polytechnic Institute and author of "The Whale and the Reactor: A Search for Limits in an Age of High Technology."

"These shopping areas are the few remaining places where people actually come together," he adds. "So if people become housebound, ordering from their computers rather than going into stores and interacting, then community stores, and interaction, will end."

Such threats may taste stale these days, as revitalized downtowns flourish alongside the colossal Wal-Marts that were supposed to kill community life. But what's clear is that negative implications don't get much play in the press, nor among entrepreneurs.

"If I had to list the top 10 concerns of e-tailers, that wouldn't be one of them," says Elaine Rubin, chair of Shop.org, an e-commerce trade group. For now, companies are just trying to grow and realizing that improving delivery will help them do it.