For a shy gal with secret fantasies, that strange little room in the video store can open some doors. 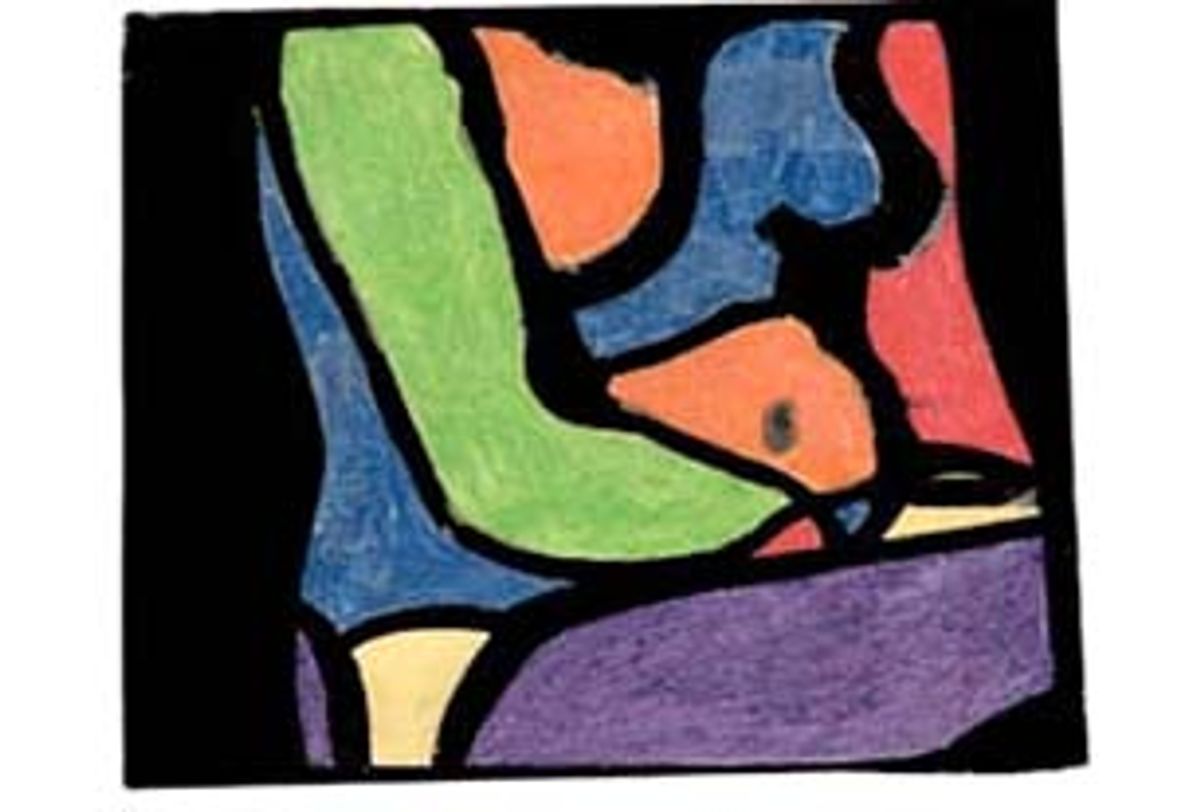 The only video store within walking distance of my apartment was on the corner of a desolate side street, near a lumberyard and a parking lot. After renting a few mediocre comedies and action movies from their limited selection, I began to wonder if they rented other kinds of movies and mentioned this to my boyfriend, C. The few times we'd been in there, I'd noticed that some customers disappeared behind a wood-paneled door, then emerged a few minutes later with a scrap of paper, which they handed to the person behind the counter.

One night, I nudged C., raised my eyebrows and whispered, "Should I ask?"

We looked at the shelves of videos, pretending that we were trying to make up our minds, until there were no other customers in the store. Behind the check-out counter a man sat grinning, his eyes fixed on the sitcom he was watching on a portable black-and-white TV. Summoning my nerve, I approached the counter and, in a low voice, asked, "What's in there?"

"Oh really," I said, trying to sound slightly surprised, casual and interested at once. Canned laughter came from the television set; the video man chuckled.

His belly bounced slightly. Swirls of smoke rose up from his cigarette burning in a large ashtray brimming with spent butts and ash.

The man heaved himself off the chair, walked around in front of the counter and unlocked the door. C. and I followed him into a closet, about five feet wide by eight feet deep. Ratty, stained carpeting covered the floor; a single bulb wrapped in red cellophane hung above our heads illuminating walls covered entirely with video boxes that reached almost to the ceiling. Standing in the quiet, softly glowing redness of the narrow space was like being in the eye of a tornado, while a barrage of breasts, slick penises and tongues, splayed legs, rouged labia, lasciviously lipsticked mouths and bodies entwined and connected every which way swirled around us in super-saturated color. Numbers scrawled on pieces of masking tape in the upper corner of each box were the only indication that there were any sort of rules amid this orgiastic chaos.

"Here's how it works," the man said. "You write down the number of the video you want to rent on a piece of paper." He pointed to a pad on the back of the door and a pencil dangling from a string. "Then you bring it to the counter and I get the tapes for you. I'm going to leave now. When I close the door behind me, just turn the lock on the doorknob, will you? And don't forget to lock it when you leave."

The sound of the door shutting made the room feel vacuum-sealed. C. leaned over to turn the lock on the knob, then he turned to me. We looked at each other for a moment, wide-eyed, almost holding our breath, and a second later, burst into laughter.

We started reading the titles emblazoned on the boxes. Some highlights: "Wild Housewives," "Show Me How," "Both Sides Now," "All Aboard," "Organ Grinding," "Late Cummers" and "Horizontal Bop." After the initial bout of giggling, the mood turned serious, almost contemplative as we looked at the scenarios, the bodies and the faces, trying to decide which ones were going to do it for us.

"You pick one and I'll pick one. How about that?" C. suggested.

We both pretended to be shy, to be shocked, as our eyes took in the images before us. A kiss or an embrace would have been too romantic a gesture in this closet full of lust. I thought about grabbing C., fondling him, unzipping him and pressing myself against him -- the way I had once in the dark corridor of a nightclub, when we did it standing up against the emergency exit with our long winter coats wrapped around us, shielding us from view. It also crossed my mind that there might be a peephole or that the guy at the counter might wonder what was taking so long and barge in on us, catch us in the act and throw us out. It would be too humiliating to risk it.

"How about this one?" I said, pointing to a box showing one of the more conventional scenarios: A hairy-backed, bald-headed man humping a busty, pink-nippled blond with big hair, her face contorted in pain -- or was it ecstasy? Not that it mattered.
C. leaned in slightly to get a better look.

"Hmm, sure. Whatever you want."

C. often whispered stories into my ear while he touched me. By listening to my breathing and feeling my body's responses to the scenes he described, he intuited secrets and wishes that I could not let myself speak aloud. Nice, normal women weren't supposed to have these thoughts. Or, if they did have them, most wouldn't admit to it. But because he kept telling me stories that provoked and enhanced these thoughts, somehow that made it OK to think them. But I still couldn't bring myself to tell him.

Now, confronted with a wall full of tantalizing pornography, I was tentative. What I really wanted was to watch things I wouldn't actually want to do myself or to watch others do things I wanted to do, but didn't have the courage yet to admit I did. I wanted to watch something that repulsed me just a tiny bit; something a little bit kinky, a little aggressive.

"Which one are you thinking of?" I asked softly, getting closer to him so that the sides of our arms were barely touching. He shifted slightly away from me. I sensed a hint of annoyance coming from him, as if the sound of my voice were disrupting a fantasy he was just trying to get off the ground.

"Let's not tell each other which one we're picking. That way it'll really be a surprise when we get home. OK?" he said.

"OK," I said. I knew he wanted to look without being looked at.

After five or 10 minutes in that little room, I was beginning to feel claustrophobic. We both scribbled our numbers down on separate pieces of paper and folded them in quarters, as if we were entering a sweepstakes. After we opened the door, we dutifully turned the lock and closed it behind us.

Back at my place, C. plopped on the couch in front of the television and began rolling a joint. I poured two glasses of ginger ale in the kitchen.

"Which one do you want to watch first?" C. asked, as I handed him a glass.

He struck a match. The joint crackled. I heard him inhale deeply and hold it.

We passed the joint back and forth in silence. I ceremonially lit the half-melted votives on the coffee table. Then he gallantly suggested that we watch the video I picked first. I popped the tape into the VCR, made sure the shades were completely lowered, turned off all the lights and in my T-shirt and panties went over to join C. He had already stripped down to his briefs and was lying on the bed.

I pressed the play button on the remote control and we lay there, side by side in the dark, watching as the FBI warning flashed on the screen. We looked straight ahead, not saying anything or even looking at each other, bathed in the screen's bluish light.

The frenzied motion on the screen reflected onto the walls and I worried that someone in one of the buildings across the street would see the light flashing obscenely through the slats of my bamboo shades. Then I thought of my neighbors below, above and on either side of me. The music, the moaning, the grunting, the panting, the high pitched "ah-aahh-aaahs," the throaty "fuck me babys," the shrieks and squeals, the "I'm comings" seemed louder than they probably were. I lowered the volume anyway.

"Don't worry about it. No one can hear," C. reassured me. He rolled onto his side, propping himself up on one elbow.

"You picked this?" he asked.

"Uh-huh," I said as he nuzzled his face in the crook of my neck and pressed himself tightly against me.

Gabrielle Walter is a writer living in New York.