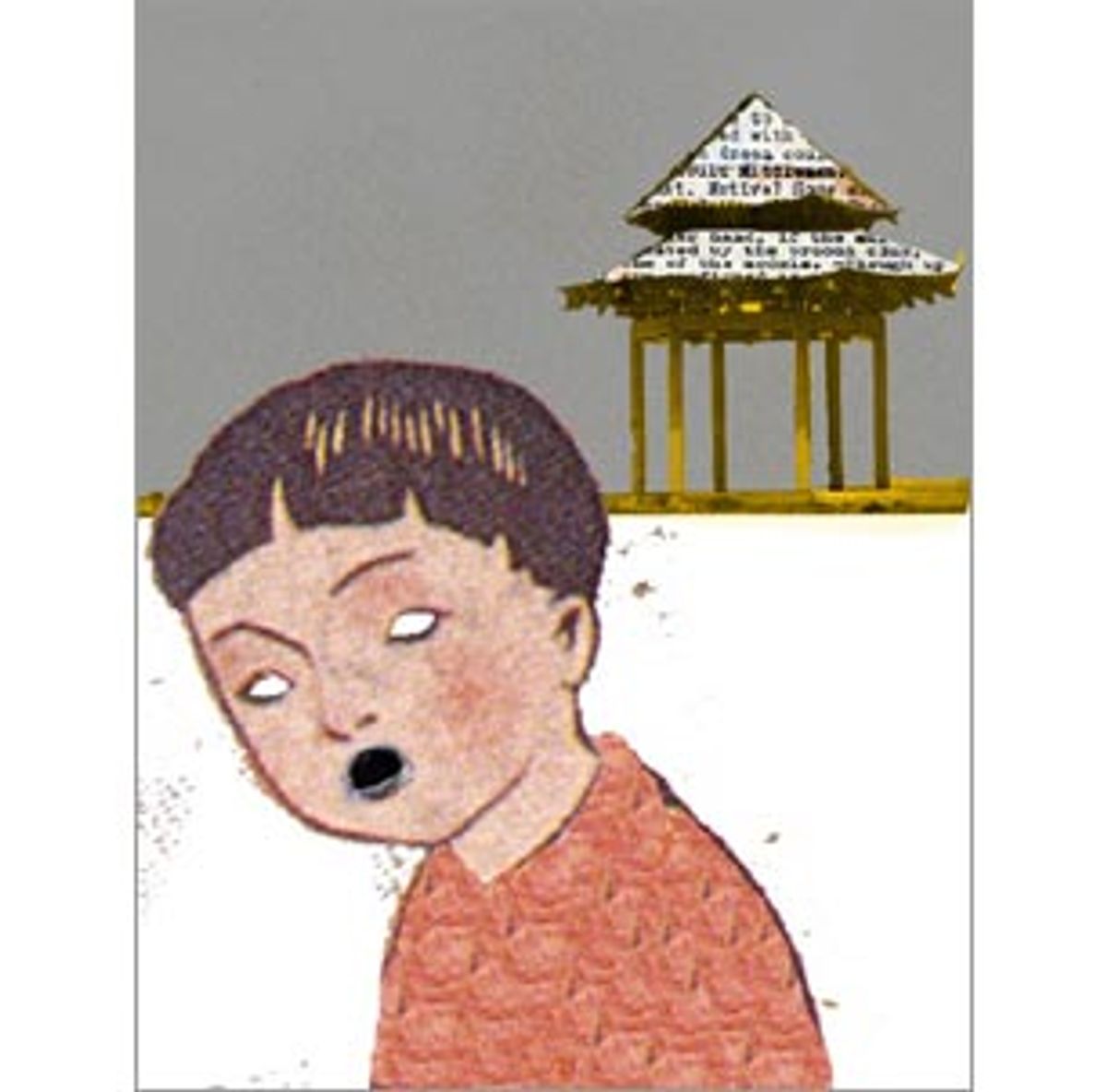 Picture, if you will (as Rod Serling used to say), 75 to 100 narcoleptic zombies. Packed on plywood benches in a room big enough for half that many bodies, they congregate once a week, for 90 un-air-conditioned minutes, for an English conversation class. Maybe Jesus Christ could feed them all lunch with half a bag of potato chips and a can of Pepsi. But I don't know any mere mortal teacher -- regardless of how many master's degrees he has earned in TEFL and TOOFL and TAWFUL -- who could accomplish anything in that situation beyond simpering and adjusting his tie.

Even under optimum conditions these particular narcoleptic zombies would be ineducable. This is Japan, where university students' inner beings have been reamed out in junior high and high school. Haitian voodoo is no more effective than Japanese secondary education in producing the living dead. Needless to say, the joy of learning is nothing but a one-liner in the universities. And it gets worse.

With the graying of this society (potential baby makers would rather window-shop), there has been a lowering of college entrance standards, unbelievable as that may sound. I used to be the only blue-eyed redhead in the room. But far-Eastern motorcycle punks and their molls love to alter their appearance with bleach and henna and contact lenses of bizarre coloration. When the class bell rings, it looks like the St. Patrick's Day parade. Or maybe the morning after.

These are kids so deep in the underclass that they have tuberculosis with symptoms. I'm living the national health crisis. I stay hunkered behind the teacher's desk, next to an open window. I don't circulate and I accept no papers. It's impossible to get homework out of them, anyway. You're not supposed to ask for homework, or any other kind of work, from these zombies. College is the only period of repose they get between the cradle and the crematorium. They're not expected to learn anything. It's considered inhumane to ask them to do more than sleep or chat on their walkie-talkies with coevals across the corridor.

The companies that will enslave them upon graduation pay attention only to the numerical standing of the universities that churn them out. The employers assume, correctly, that their new recruits know absolutely nothing, and simply train them from the ground up, starting with proper groveling techniques.

Here's an anecdote that shows how Japanese universities foster literary endeavor. This short parable will shed some light on perhaps the saddest country in the world, but a happy place for a confirmed scribbler like me, who craves time to write about other, less pointless places. You'll recall, a few years back, a pair of eggheads at the University of Utah announced that they'd effected cold fusion on a table top. For a couple of days, even respectable members of the scientific community were suspending disbelief. Cold fusion was touted globally during those two days. We were told that the energy needs of the human race had been permanently satisfied by the most important technological breakthrough since Prometheus showed us how to harness fire. The Kingdom of Heaven had finally been established on Earth. It was to be fueled by cold fusion, and it was centered at the University of Utah.

Now, as it happened, on the very days when those tidings of comfort and joy were being trumpeted, I was preparing a group of college students here in Japan to go to a study-abroad program at -- you guessed it -- the University of Utah. My pupils were to stay at a dormitory located coincidentally within spitting distance of the laboratory where the miracle was bubbling and simmering away on its famous table top. I had only just arrived from teaching in the People's Republic of China, where students consider education the most fabulous privilege of their lives, and are fond of reminding themselves and each other that it takes the sweat of four peasant families to support one college kid. My Chinese charges were real, honest-to-God university scholars, the type who can be engaged on a roughly equal footing as fellow adults, who give as much as they take from their professors. In the land of Mao Zedong, I had an actual subject matter (literature, not EFL), and I came to know what real teaching is; how walking into class is a pleasure you anticipate all week, and walking out you feel shot full of methedrine.

Naive as I was, coming straight from the genuine higher education system of the Asian mainland, I assumed that my new Japanese students would have similar attitudes and capabilities, and that cold fusion in particular was something that would excite them. Unlike my beloved disciples whom I left behind to die on Tiananmen Square, these Japanese kids had cars and motorcycles, which they cherished and polished. And I figured the radical transformation of the world's energy supply would be of personal interest to them.

So I mounted the professorial podium with a big grin on my face and began to talk about all the important and exciting things that lay in store on the other side of the Pacific Ocean. I was as brief as possible, because I fully expected to be mobbed at any moment by grateful and thrilled and adoring little people. But I couldn't seem to get a rise out of them. They only sat there, passive. I was puzzled. Were Japanese as inscrutable as the old stereotype claimed?

I had been emphasizing the scientific and economic angles of cold fusion. Maybe that was a little too tough for them at first. So I tried a different approach. I said (or perhaps shrieked), "Think of it, kids! You'll be at the nerve center! Electronic broadcast media types from all over the world will be camped right under your dormitory windows!" Not a single eyelid fluttered. It was as if I'd just informed them that the cafeteria was serving fish and rice for lunch.

For maybe the first or second time in my life, I was stunned into speechlessness. They took advantage of that moment of silence to ask a couple of questions: Would MTV be available in the rooms and was there a shopping mall nearby?

And the scales were lifted from my eyes. I suddenly understood this whole archipelago. I had a downright Joycean epiphany, and grasped an essential fact about the land of Pokimon and karaoke. All at once I knew the answer to the question that plagues every foreigner who comes here. How does Japan turn its people into, well, into Japanese? How do you drain a whole people of psychic vigor? How do you render them incurious and intellectually languid, with only nervous energy and shallow greed to fill the mental vacuum?

I already knew why this was done. Everybody knows why. Such people are easy to govern. They're made-to-order dupes for contemptuous plutocracies, such as the one that runs this country so badly. The answer to the question of how this is done lies in the secondary schools. The educational system is deliberately and cynically designed to serve this end. Starting in junior high, through sadistic amounts of homework and relentless cramming of the short-term memory with arbitrary data, young souls are reamed out like melon pulp, and young minds are robbed of curiosity, which we Homo sapiens are supposed to share with the higher, and even mid-level mammals. Once you've killed curiosity, you've killed the cat, to turn the proverb upside-down. By the time the poor saps get to college, they are ineducable. Their professors couldn't have an easier job. It's like being the night-shift nurse on a narcoleptic ward.

The very term "Japanese university" is an oxymoron, in the sense that, properly speaking, universities exist to stimulate independent thought and lifelong curiosity -- the very qualities that, if unloosed on Japan, would cause this whole edifice to crumble. Scrutiny is one thing Asian oligarchies have never been able to stand. An ignorant and incurious populace is a basic requirement for Japanese society, and the educational system couldn't be better designed to serve such ends. Needless to say, that study-abroad program at the University of Utah flopped as badly as cold fusion, right there on the same campus. But nobody cared or even noticed. It was just another somnambulistic gesture, a riddle with no answer signifying the regulation Zen emptiness. The puerility and sloth of the students, the pure nothingness of the curriculum: It's all sham and mummery, gutless as a haiku poem.

But I had plenty of time to write this article.

I've found a niche in these languid institutions that the natives call, with hardly a smirk, "daigaku," which means "big schools."

"Parasite" is such an unpleasant term. I prefer "opportunistic organism." Where dead things exist, there will be happy worms.

Tom Bradley lives in Japan. He is the author of several books, including "Killing Bryce," "Acting Alone" and "Curved Jewels."