"Simpsons" fanatics think the show's creators have betrayed America's most dysfunctional family. The writers think the fans should sign off the Net and get a life. 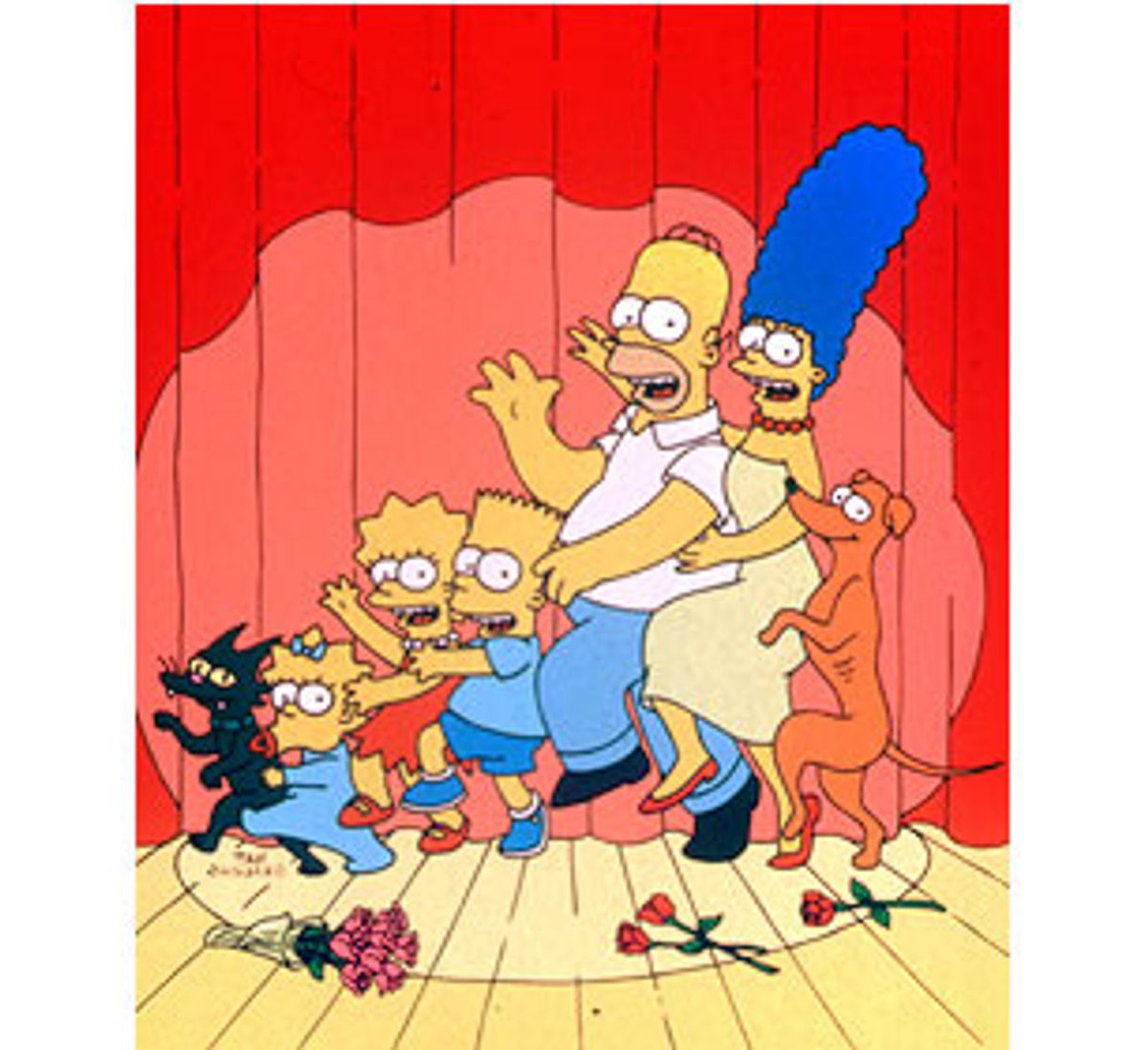 Milhouse: We gotta spread this stuff around. Let's put it on the Internet!
Bart: No! We have to reach people whose opinions actually matter!

After 10 years, "The Simpsons" remains one of the most critically acclaimed shows on TV. You'll find it on the "best" list of almost every TV critic, along with words of praise for staying irreverent and funny after all these years.

But if you turn to alt.tv.simpsons, the show's Internet discussion group, it's as if a different show is being talked about. New episodes are routinely panned and held up as evidence that "The Simpsons" has been vulgarized and cheapened. For example, the reviews for this season's opening episode (the one with Mel Gibson) include phrases like "a weak offering of recycled themes," "not many laughs" and, best of all, "I think Homer was hired as a script consultant for this episode." (These reviews are available in capsule form in the indispensable Simpsons archive.)

The most interesting and articulate contributors to the group -- the ones who can actually spell and punctuate -- are the ones who argue most passionately that the show has, in the words of fan Ondre Lombard, "turned into a cold, cynical, anything-for-a-joke series with one-dimensional characters." The harshest critics regularly open their missives with the tagline "Worst episode ever."

Of course, all long-running shows get accused of having lost it, and nowhere more so than on Internet newsgroups. TV writers who read the newsgroups -- and many of them do for the immediate feedback it provides -- sometimes become frustrated with these dedicated but hyper-critical fans. For example, Larry David once said that he stopped reading "Seinfeld"-related posts when every new episode started being pointed to as a sign of the show's decline.

The difference with "The Simpsons" is that the writers of the show have sometimes struck back -- in interviews, and even on the show itself. The most obvious dig at the fans came in a scene in the episode that first aired Feb. 9, 1997. It began with the still-unnamed Comic Book Guy saying: "Last night's 'Itchy & Scratchy' was, without a doubt, the worst episode ever. Rest assured that I was on the Internet within minutes, registering my disgust throughout the world." "As a loyal viewer," he added, "I feel they owe me."

"What?" said Bart. "They've given you thousands of hours of entertainment for free. What could they possibly owe you? If anything, you owe them."

The scene was a hilarious, slightly cruel kiss-off from the writers to the Internet fans, one that pretty much ended any rapport that might have existed between one group and the other.

Back in 1993, writer Bill Oakley was sending friendly e-mail messages to selected "Simpsons" enthusiasts; by 1997, Oakley was telling Time Out magazine about Internet fans who "take [the show] too seriously to the point of absurdity." And in 1998, producer Ian Maxtone-Graham, interviewed by the London Independent, referred to "the beetle-browed people on the Internet," adding: "They see everything as part of a vast plan ... That's why they're on the Internet and we're writing the show." (Some of the more bitter alt.tv.simpsons regulars have taken to calling him "Ian Haxtone-Graham" in retaliation.)

It's hard not to be a little sympathetic to the writers on this. "The producers [of a show] need to pay attention to feedback from the viewers," says TV programming consultant Marc Berman. "But they can't agree with all of it." Also, most of the feedback the "Simpsons" writers have been getting has, in fact, been positive: The ratings and the TV critics are both telling them that they're doing a fine job. But for some of the Net fans, this success and acclaim is one of the problems with the show as it now stands; they feel it's made the show's creative team lazy and self-satisfied.

As alt.tv.simpsons regular Ben Collins wrote: "The staff believes its own hype. When TV Guide says 'The Simpsons' is better than ever ... the producers run with it, and drag the show through the same rut it's been in for two seasons."

But why are these Internet reviewers so much tougher on the show than the professional critics? Well, what critics usually praise about "The Simpsons" is its irreverence toward everything crass and crazy in American culture, its harsh satire. The die-hard fans tend to be more interested in the characters as people than as vehicles for social criticism. While they enjoy the satire, above all they see "The Simpsons" as a character comedy, at its best when most compassionate toward the flawed-but-lovable Simpson family. Many of these fans cite the early "Lisa's Substitute" -- the Dustin Hoffman episode, and the most serious and poignant "Simpsons" episode of all -- as a favorite.

It's this element of compassion that fans find lacking in the recent flood of "wacky" episodes; to quote Lombard, in the last few seasons "the satire tends to forsake character realism. Stories these days don't tend to deal with the ... feelings of the characters." Emotionally affecting episodes have been rare of late, as "The Simpsons" has placed more emphasis on cartoony action.

Almost every episode now seems to end with some sort of violent action climax. Already this season, Homer survived an assassination attempt by a horde of evil restaurant owners, the kids torched a pile of evil robot toys and the whole family was attacked by rampaging farm animals. Some fans point to these outlandish plots as evidence that creator Matt Groening's original rule for the show -- that "The Simpsons" would never do anything a real, non-cartoon family wouldn't do -- has been violated.

To the TV critics, what matters most is that the show is still taking on the big cultural targets; the fans are quicker to object when a joke, however nervy, gets in the way of the characterization -- or worse, when characterization is violated for the sake of an easy joke. In the ninth-season episode "Bart Star," Lisa showed up at football tryouts, expecting to stir up controversy and fight discrimination against women in sports. When she discovered that the team already had three female members, she lost interest and left; she didn't care about football, just about taking up a new cause. It was a nice bit of self-parody, but many fans saw it as a betrayal of the character, an indication that the writers had misread Lisa's personality, turning her from a sweet girl with a social conscience into a self-righteous, preachy troublemaker.

You could say that this kind of attitude is presumptuous for supposing that fans know more about the characters than the writers do. Certainly some of the writers have seen it that way; in one of the episode capsules, a longtime fan recalls getting a private e-mail from a "Simpsons" writer saying "that he cares more about Lisa than any 'abject admirer of Lisa Simpson.'"

The fans could counter by pointing out that just because someone writes for a show doesn't mean he's necessarily in a position to understand what the show was originally like. In that notorious interview, Maxtone-Graham admitted that he had hardly ever watched "The Simpsons" before he was hired. The current executive producer, Mike Scully, didn't join the show until the fifth season, when, in the opinion of some fans, its humor had already started to shift toward simple cartooniness, and Homer had started to dominate the show.

Which brings us to one of the most often-used phrases on alt.tv.simpsons, "Jerkass Homer." This refers to a new characterization of Homer that has supposedly become prevalent in recent seasons, a Homer who is not simply dumb but disgusting and semi-sociopathic. This is the Homer who, in the season opener, showed Mel Gibson his wife's wedding ring and said, "It's a symbol of our marriage, signifying that I own her." Fan Dale G. Abersold wrote, "This new Homer displays only three characteristics: lust, greed, and stupidity. Yes, [the] old Homer was lustful, he was greedy, he was dumb ... but he was so much more. Can you imagine the current Homer thrust into the classic episodes of the first two seasons?"

Well, maybe you can, at that; despite the implication that Homer has become more boorish over the years, it's hard to imagine a bigger jerkass than the Homer of the show's first couple of seasons, the Homer who told Bart, "Always make fun of those different from you." The difference, perhaps, is that the early Homer usually had to apologize for his behavior, learning how to be a better husband and father. (Even if he usually forgot these lessons by the time the next episode started.) As Homer began to replace Bart as the show's great cultural icon, the writers seemed to become more indulgent toward his antics; follies he would once have learned a lesson from are now seen as kind of cute, by the writers and by the wider public that made Homer a TV hero of the '90s.

You could argue, then, that the characters haven't changed so much as the attitudes that inform the way the characters are written -- that "The Simpsons" is different because the producers and the public expect different things of it. Or you could argue that nothing has changed at all, as Scully did in a recent interview: "You can sit down and watch an episode we did 10 years ago or one we did last year and the characters are still the same."

But whatever you think, and whatever "The Simpsons" might become in the next couple of seasons, the alt.tv.simpsons regulars will keep writing, disappointed with what the show has become -- still devoted to what it used to be.