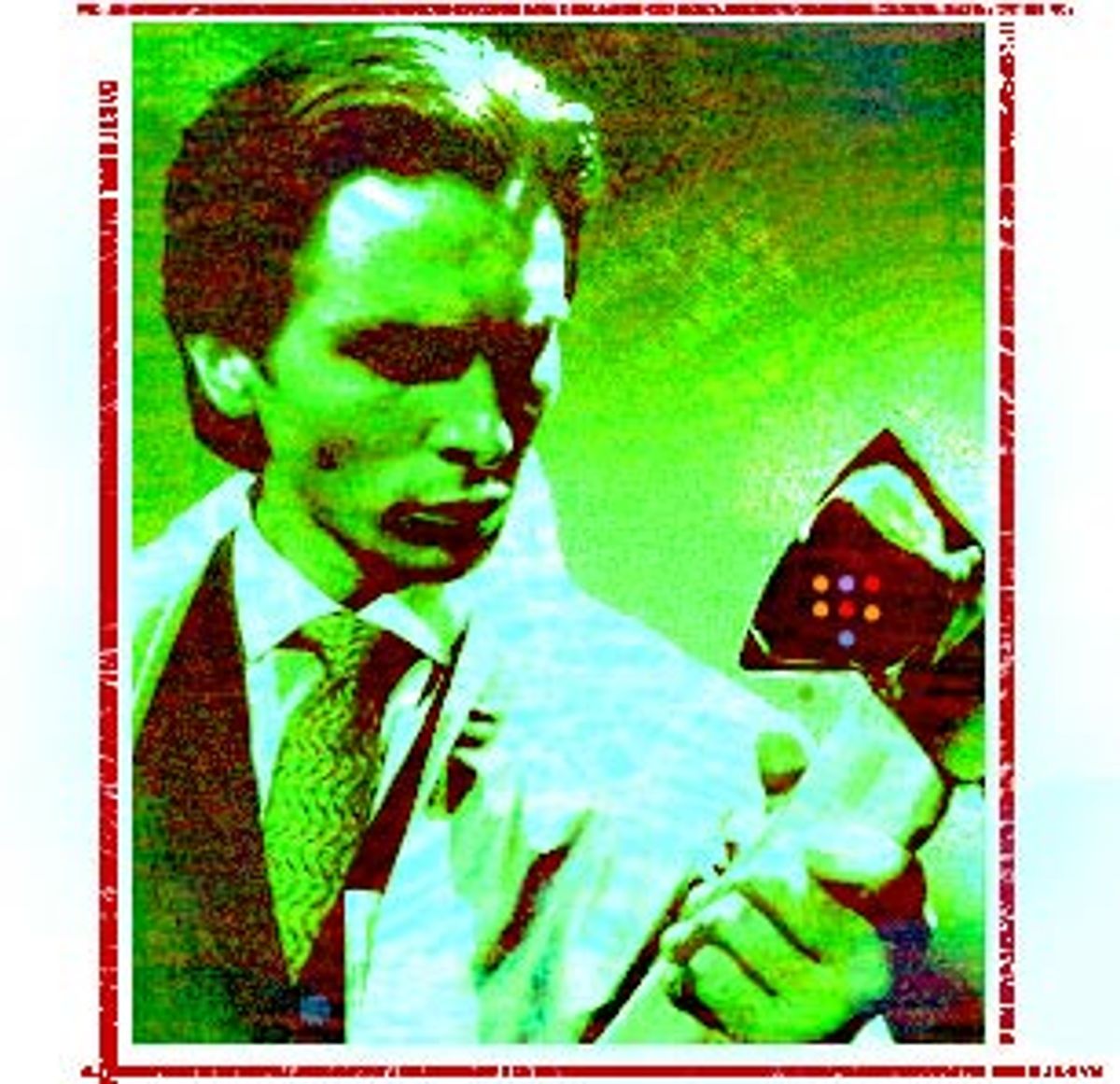 Mary Harron's giddy dark comedy "American Psycho" is more entertaining than Bret Easton Ellis' novel was controversial. Adapted by Ellis with Guinevere Turner and set in 1987 Manhattan, the film revolves around narcissistic Wall Streeter Patrick Bateman (Christian Bale). Bateman is the embodiment of the soulless yuppie, a man who works out to a tape of "The Texas Chainsaw Massacre," revels in brand names and delivers trite lectures on the talents of Whitney Houston before his murders. Bale plays the slasher sociopath like Pierce Brosnan soused on a Tom Cruise cocktail. He's perfect in the role, originally offered to Leonardo DiCaprio for his post-"Titanic" comeback.

The film, which will open wide in early April, picked up a dreaded NC-17 rating, supposedly because of a sex scene between Bateman and two prostitutes. It's likely that they bristled at the sex position, which features the trio in a love train, with Bale watching himself in the mirror as he brings up the rear.

After the Sundance premiere, Harron ("I Shot Andy Warhol") and Bale ("Velvet Goldmine") fielded questions from a roomful of reporters.

Can you discuss the ratings board decision?

Mary Harron: I certainly feel that this thing with the ratings board is about the blank expression of the girls in the sex scene ... I was very concerned with emphasizing the boredom of these girls. The blankness, and their indifference to it.

Christian Bale: That was a real choice because, in the book, they had the girls having multiple orgasms, and screaming ...

Harron: I saw that as a Penthouse Forum fantasy. I mean, these were girls for hire. They're not going to be sexually turned on by a client.

Harron: Rear entrance sex came up. It did.

Did the SCUM Manifesto [the Valerie Solanis tract at the center of "I Shot Andy Warhol"] influence you in making this film?

Harron: Well, you know, I have to say that in some ways, Valerie Solanis would probably approve of "American Psycho" because it is a very harsh view of all these guys' behavior. It's not laudatory. It satirizes them viciously.

Do you think that we're in a different era now as far as your portrayal of these Wall Streeters goes?

Harron: I have to say, I don't regret setting it in the late '80s. Because the thing about the late '80s is that guys like that were really princes, and they were really revered. Everyone regarded the Wall Street guy and the stockbroker as a hero.

What attracted you to Bret Easton Ellis' book?

Harron: I did feel that it was seriously misunderstood. The people who were attacking it, um, weren't allowing for the fact that it was a satire on Wall Street, and on these young Turks. I mean, you can argue about the level of violence in the book, and how much of it should or shouldn't be there, but I don't think you can say it's endorsed in the pages. To me then, it becomes an issue of representation. How much you write about it, how much you show. I thought the book was hilarious.

Will you be satisfied as a filmmaker if the movie comes off to audiences as a brutally dark satire? The way you perceived the book?

Harron: I think it is. But, to me, most of the murders are terrible, and you can't make them comic. The murder of [Bateman's co-worker] Paul Allen is comic. But the murders of the homeless guy and the two women -- they're not played for comedy. You can't. They're not comic. And the murder of Paul Allen is only funny because he and Bateman are so loathed.

Bale: There is always something a little bit comedic, even though it is upsetting. Not so much with the homeless guy he murdered ...

[To Bale] What attracted you to the role? Could you identify with the character?

Bale: Mainly, I was very surprised by the script. Mary had sent it to me, and I read it, and I hadn't read the book yet. And I found the script hilarious, when I really wasn't expecting it to be. It was so sort of opposite of anything I'd ever done before.

What was your favorite scene to act in?

Bale: The murder scene of Paul Allen [he hacks him to death with an ax] was one of the most enjoyable, but it also became one of the most crazy ones we were doing because I was on like 20 cappuccinos.

Were you secretly smiling about the irony of the despicable character being named "Paul Allen" -- the co-founder of Microsoft?

Harron: That was the worst thing that happened. They wouldn't let me use "Paul Owen."

Harron: The legal department of Lion's Gate. They said, "There's a Paul Owen in the New York phone book, and he won't give us permission to use his name." Which was ridiculous. So they gave me a list of names and I said, "Oh. Well, Allen sounds like Owen." I must have been the only person in the world who didn't know who Paul Allen was. And no one said, "Did you get permission to use that name?" And I was like, "It's too late, we already shot with it." That's horrible. I felt so bad.

What was it that made up your mind about using Christian?

Harron: What I was looking for was a complexity. When I met with Christian and I watched his face, it wasn't a difficult decision. He reminded me of Lili Taylor in the sense that there was a lot below the surface. He had a sense of mystery and depth in his face. And I hadn't sensed that with anyone else.

What kind of a film would it have been if you had worked with DiCaprio?

Harron: You know, I can't say, and it's not because he's not a good actor. It would have been a very, very huge budget film [DiCaprio was reportedly offered $20 million to star], and that would have been a mistake. You know, money matters, and if you go up in the stratosphere on your budget then you have no control over it.

What was your budget?

How did you prepare for the role, Christian?

Bale: I would say that the best source for research was the book. There were so many great details in it. It was informative, but at the end of the day it sort of just confirmed that I didn't really need to go into any in-depth analysis. And also, the strange thing with this character is that because Bateman is performing the whole time -- there was, you know, with most characters, there's a great fear of showing, revealing that you're performing. You know, you want to be as naturalistic as possible. With this, I didn't have to hide that very much. Even when he's by himself, there is no Bateman there. At all. So, it was a strange sort of mental preparation.

Will this movie change your career? Catapult you into stardom?

Bale: That could well be true, but I have been involved in other films where we sort of had that anticipation. It really didn't sort of pay off.

Bale: "Velvet Goldmine." There was a lot of excitement previous to it being released, and then, you know, I think it was Miramax not putting their money where their mouth was. Nobody knew it was actually released.

What about "Empire of the Sun?"

Bale: Well, I went a little bit insane after that because I couldn't stand it so much and I wanted to get the hell away from it. I was just too young. So, obviously, I would love if, after "American Psycho," I wouldn't have to wait another year and a half to get to make another movie that I really want to make.

Los Angeles writer Mark Ebner has written for Spy, Premiere and Details. This is his ninth Sundance festival.