In a recent episode of "Jane Fonda's Life," a chauffeur introduced her to a new fella: God. 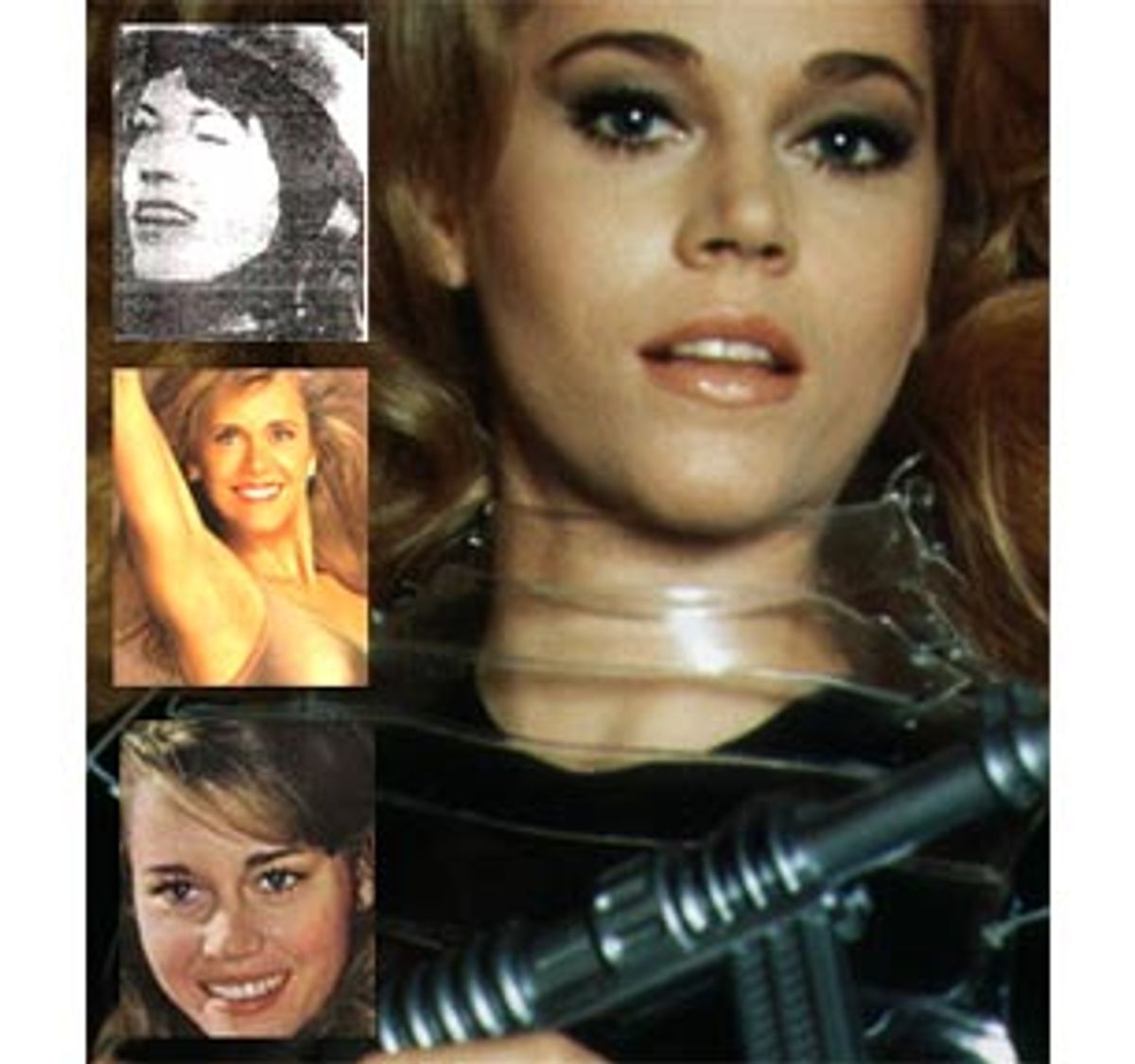 Earlier this month, Jane Fonda and her husband, Ted Turner, announced their separation. So what seems to be the problem?

The Washington Times reported that Fonda is "regularly attending church services and Bible studies in Atlanta," and quoted a friend of hers who said the actress' faith is "very real, very deep." Remember, Turner is the man who once called Christianity a "religion for losers." But wait ... Jane Fonda a born-again Christian? Hanoi Jane of Nazareth? The Gospel according to Klute? Comes a Horseman of the Apocalypse? Working 9 to 5 for the Lord?

It may seem odd, but in the context of Fonda's public life, her letting Jesus into her heart might be easier to comprehend. Jane Fonda has changed personas enough times to make David Bowie blush and has worn more hats than Hillary Clinton during baseball season. Having already been a fashion model, social activist, Academy Award-winning actress, pinup sex goddess, government gadfly, fitness goddess and trophy wife, it shouldn't surprise anyone that she would add born-again Christian to her risumi.

The more interesting aspect of this story is how she seems to have stumbled upon this faith. Apparently, the person who showed Fonda the light was her chauffeur. Again, according to the Washington Times, the "chauffeur invited her to attend his church, the predominantly black Providence Missionary Baptist Church."

Sound familiar? A batty older white woman driven around Atlanta by her black limo driver who ends up teaching her a thing or two? Call it "Driving Miss Crazy." Let's listen in:

Chauffeur: Where now, Miss Jane? The airport? CNN? The Braves game? The gym?

Fonda: No, Clayton. Take me to my prayer session. I'm having a special guest today -- George W. Bush.

Fonda: Right. You know his initials also stand for "George Washington Bridge"? Pretty prophetic, eh? George Washington was one of our presidents as well. And George W. is building a bridge to the 21st century.

Chauffeur: I think that was President Clinton, Miss Jane.

Fonda: Oh, you're right, Clayton. Wow -- I don't know who did more drugs in college, me or George W., but we both seem to have been bitten by the Jesus bug. Maybe it was the brown acid?

Chauffeur: Will you be wanting to stop for lunch, Miss Jane?

Fonda: Yes, lunch. Although I want to make sure I don't overdo the whole "snacking" thing. I mean, look at Sally Struthers. In her case, the Lord's calling seems to have been a Pavlovian dinner bell.

Fonda: Clayton, this whole born-again business -- how will that affect my actual age? Now that I'm no longer going to be with Ted, I'll need to get back to Hollywood, and you know how difficult it is to get good roles when you're a woman pushing senior citizen. I don't want to be doing any of that dreck they've been giving Meryl.


Throughout the course of her very public life, Fonda has clearly telegraphed the end of one disparate phase and the start of another by making spectacular leaps in character. The rather squeaky clean daughter Henry Fonda sent to Vassar later went off to Paris, married auteur Roger Vadim and scandalized her father by appearing scantily clad in numerous Vadim-directed French art films (such as 1964's "La Ronde," 1966's "La Curie" and, of course, 1968's "Barbarella," the cult classic that not only showcased Fonda doing a campy striptease, but also, regrettably, gave '80s schnooks Duran Duran their moniker).

She returned to the States in the late 1960s with a political bent, becoming the celebrity face of various anti-establishment causes, such as the Black Panthers and assorted Native American groups. Her most infamous revolutionary gambit was her stint supporting the North Vietnamese during the Vietnam War, a turn not soon forgotten in some circles.

Just before she closed the chapter on her radical political days, which ended symbolically with her assisting her second husband, Tom Hayden (himself a '60s figurehead as both author of the 1962 Port Huron Statement -- the manifesto of the Students for a Democratic Society -- and one of the Chicago Seven), win election to the very establishment position of California state legislator, she was off in a completely new direction, that of female workout guru.

Fonda almost single-handedly started the home exercise craze, and to date has released 18 (!!) workout videos. Though one can make a case for Fonda's fitness turn as one that empowered women as masters of their own body images and exercise regimens, the more prevalent interpretation saw this onetime feminist thinker leading a frivolous squat-thrust revolution.

Even more startling was her next transformation, to billionaire businessman Turner's eye-candy/trophy wife. And sure, she continued to work with Native American groups below the radar, but in paparazzi-land she aggravated more indigenous Americans by co-leading the baseball Braves' demeaning Tomahawk Chop chant.

Fonda is indubitably an accomplished actress. In addition to her two Best Actress Academy Awards and five other Oscar nominations (including one for Best Supporting Actress), she has played each of her life roles convincingly. See Jane be daddy's good girl in the '50s. See Jane symbolize radical chic in the '60s. See Jane pose with a Viet Cong anti-aircraft gun in the '70s. See Jane limber up in a skintight leotard in the '80s. See Jane waving to the camera on the Turner ranch in Montana, in fringe-leather jacket and cowboy hat in the '90s. And now see Jane pray to the Lord for salvation in the new millennium.

Perhaps the dreariest part of the Jane Fonda saga, other than the fact that her retirement from acting has allowed her once-formidable skills to have officially been eclipsed by those of her sappy sibling Peter and -- worse yet -- her niece Bridget, is that there is something dismal about her drifting from one personality to another. It's as if her whole life can be summed up as "Six Characters in Search of a Screenwriter." Certainly, many of her spiritual swings seem to have been unduly influenced by the men in her life -- the piggish Pygmalion Vadim molding her raw clay into sex symbol, the opulent Turner ka-chinging her into happy housewife, the mysterious chauffeur driving her to Jesus.

These are the tendencies of a woman who doesn't really know -- or trust -- herself. So maybe Jesus is the best fellow to turn to at this stage in her life. After all, her husbands haven't exactly been the three wise men. When Turner likened the elation he felt when AOL and Time Warner merged to "that night when I first made love some 42 years ago," living up to his nickname the Mouth from the South, you kind of got the feeling that turning to Jesus is a sensible alternative.

Here's hoping that she finds what she's looking for, after all these years, in the Lord. And if she sees him walking on the water, it will be a golden pond, indeed.