Living it up and getting down with "Groove," the dance-party pic that actually gets it right. 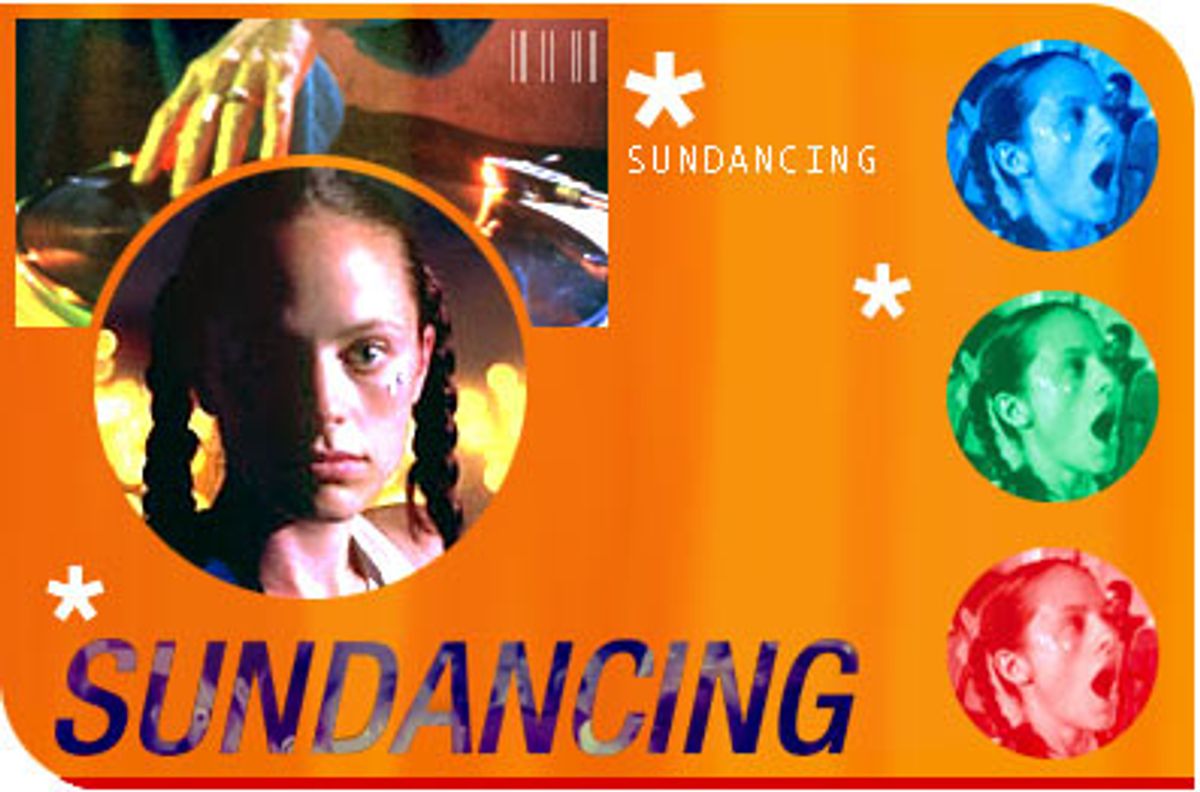 It's almost midnight and the temperature is well below freezing, but the long line of patient partygoers is willingly set outside a cement box of a building somewhere on the outskirts of Park City. While film industry executives schmooze it up in town with pricy wine and French hors d'oeuvres, this queue of boys in leather jackets, candy raver kiddies and girls in neon pink wigs is waiting to get into the "Groove" premiere party, the only rave at Sundance.

The bass beats pound outside in the snow, but the bouncer will only let groups in as other exhausted partiers make their way out. The place is packed to capacity, and every time the door opens to eject another sweaty dancer, big clouds of steam waft out to envelope the freezing crowd with a damp mist.

I'm in line with my entourage of 15 friends. Or rather I'm part of the entourage of my friend, Josh Lowman, who helped edit "Groove" and thought it would be a grand idea to turn the movie's premiere at Sundance into a weekend party event, complete with hot tubs and champagne toasts.

Before we left San Francisco, the film was a just-finished local production that had been in the works for four years. But now, with the buzz machine in Park City, director Greg Harrison's "Groove" is officially a hot movie. The day after the premiere, the producers announced that Sony Classics bought the distribution rights for a rumored $1.5 million. More importantly, it was the first film to get picked up, which means that for that moment, every person at Sundance, and anyone paying attention to the mountain of media about the festival, knows all about "Groove," without knowing much at all.

This minute, however, outside the doors of the packed premiere party, everyone is still waiting. We're all pumped, and life would be just swell if only we could get out of the cold.

I'm a Sundance neophyte, and I was a bit unprepared for this Park City madness. I have exactly one movie ticket in my pocket -- for "Groove," of course -- which I was able to buy during the one day in early January when advance tickets were available over the phone. In order to get tickets, five of my friends had to hit redial for four hours. One person actually got through to an operator and bought them for all of us. When I attempted to request a press pass the woman at the Sundance office broke into gales of laughter: They'd maxed out back in November. The only other advance ticket option was to buy a package, which would have cost a cool $650. Those, I heard, were also sold out.

Of course, if I'm willing to stand in line for three hours or more, I just might be lucky enough to snag one of the few rush tickets released before each movie. The best option is to have a personal assistant who will stand in line for you. I met one pathetic member of this species who stood in line for at least 30 hours over the weekend so that his executive boss could get good seats. My friends and I endured the line for one film, the "Short Films on the Frontier" screening, a rather eclectic and occasionally excruciatingly bad number of experimental shorts. We vowed never to do it again.

That means that I am here to see "Groove," and "Groove" alone. There could be worse fates.

"Groove" takes place one night at an underground warehouse rave in San Francisco. The story follows the characters at the party: the obsessive-compulsive health-nut drug dealer; the wannabe DJ thrilled about his first gig; the enthusiastic promoter who knows just how to manipulate the police; the gay couple who get lost. The psychology of raves and ecstasy is explored by the film's two main characters, a buttoned-up writer named David, who takes ecstasy for the first time, and a jaded club girl named Leyla, who has spent her life at parties. The two meet at the party and spend the evening cuddling in the corner.

The film lacks narrative, and is sweet rather than deep, but the ever-building music and character development carry the plot. And it looks great. The director of photography turned the black-and-neon world of a rave into a mysterious and beautiful labyrinth.

In a twist that's becoming increasingly rare at Sundance, "Groove" has no star power, instead featuring unknown actors and kids culled from the rave scene. The biggest stars are Lola Glaudini, who plays a small role on "NYPD Blue," and Rachel True, who appeared in "The Craft." Hamish Linklater, the theater actor who plays David, is exceptionally touching.

Unlike other rave movies of the past -- such as "Go" or "Trainspotting" or "Kids" -- "Groove" smacks of authenticity. It's so true to the scene that it almost feels like a documentary. There is no simplistic moralistic tale warning kids of the danger of drugs: no evil drug dealers or manipulative promoters, no troublemakers showing up with guns or kids dying of drug overdoses. Instead, "Groove" details the nuances of raves, the intense connections and ecstatic transformations they spark, as well as the way the rave scene can suck partiers into endless loops of self-destruction.

"Groove" is realistic because it was made by a longtime member of the San Francisco scene. Greg Harrison, who wrote, directed and edited, conceived the film in 1996 after attending and planning break-in warehouse parties. This movie -- his first full-length after years of making music videos and documentaries -- was created with the help of the San Francisco rave scene, and the movie is peppered with local club kids basically playing themselves.

The costume designer is a prominent candy raver; the DJs include popular mainstays like DJs Monty Luke and Polywog; the musical advisor is the San Francisco record label Domestic Recording's Wade Randolph Hampton. The lighting and visual effects were created by three local groups: Radiant Atmospheres, Viberation and 3D Dynamic. The 80 or so extras who spent weeks dancing it up in a warehouse in Fort Mason were pulled off the SF-Raves mailing list. British DJ John Digweed plays a live set on the film. And so on.

Even the funding for the movie was fronted by local ravers. Entrepreneurs and engineers in Silicon Valley have for years habituated late night dance parties. Some of them now have the cash to support projects like "Groove." Brian Behlendorf, the founder of SF-Raves and the Apache Software Foundation, is one of the films backers, along with other locals like Fred Heutte and Tony Rotundo.

Of course, piecing together financing from a half-dozen backers wasn't the original intention. Harrison originally went to the studios, but turned back to the locals in frustration. "Everyone wanted a rave film; agents were telling writers to do a rave film," Harrison recalls about the early days of development. "So they'd talk to us, look at our script and say, 'Can someone die?' We'd say no. Then it was 'Can we add a gun?' They were afraid of the subject without a moral consequence." He laughs. "And after all that, the same people who didn't want it in the first place are all suddenly calling us now."

"Groove" was finished a week before Sundance. For the first few days of the fest, the filmmakers were still exhausted from the marathon editing sessions. But by the first weekend of the festival, "Groove" was already everywhere. It was selected to screen for the staff of nearly 1,100 volunteers on Thursday night. Danielle Renfrew, the movie's producer, attended the screening and went into shock when the audience got up and started dancing during the end credits. On Saturday night, the film's premiere screening in Park City, the film got a standing ovation.

Before the credits rolled at the premiere, Renfrew and Harrison were already in back to back meetings and negotiations with distributors like Tristar, Sony Classics and Fox Searchlight. On Sunday, still hung over from their party the night before, they announced the deal with Sony. And on Monday, the movie's quirky cast and crew were being hounded by the press, from the New York Times to On2 TV. Variety, the Hollywood Reporter and Mr. Showbiz all put the film's purchase on their front pages.

By the time I get to sit down with the filmmakers on Tuesday afternoon, Harrison, a sweet and unassuming guy in a T-shirt and skate shoes, is simultaneously elated and exhausted. Renfrew yawns, embarrassed, throughout our interview. "We've been in the 'Groove' bubble," she smiles sleepily. "I haven't had a chance to see anything else. But I'll never forget this."

Between 50 and 60 percent of all films that screen at Sundance manage to get distribution, according to a freebie magazine called Reel Digital News. So just by getting into Sundance, "Groove" was on the right road. But the film managed to get picked by the premiere movie distribution house and to wheedle a hefty deal, too. And by being the first to grab that golden ring, "Groove" rests in the same place that "The Blair Witch Project" did last winter.

This being Sundance, everyone now wants a piece of the action. Everywhere I go, I overhear conversations about the movie, the "Groove" party, the still-up-for-grabs excellent soundtrack or the deal -- and not merely among the sneakered filmmaker class but among those on the fur-and-suits entertainment executive track. On the shuttle on the way back to the airport, I met an entertainment lawyer from Los Angeles who had just sold "Chuck and Buck," a quirky buddy film that also had hot Sundance buzz, to Artisan films for $1 million. His clients include Steve Buscemi and Quentin Tarantino. When I told him I spent the afternoon with Greg Harrison, he swiftly handed me his business card. "Will you give him my card if you see him again? That guy's got a lot of talent."

I can't help but wonder what will happen to "Groove" when it hits the national theaters this summer. The topic alone will probably make it somewhat of a hit with kids, despite the fact that it features no stars. ("Go," for comparison's sake, pulled in nearly $17 million at the box office.) Harrison is already working on the premiere party in San Francisco, and plans to invite all the locals who helped out. But because of the movie's frank and uncritical look at a drug culture, it will also probably also draw criticism from conservative groups; and, perhaps, from the sometimes nit-picky rave scene, which doesn't like its subculture being shopped to the unwashed masses. ("Just because you make a mass-market film about a scene doesn't mean you are going to destroy it," sighs Harrison.)

For now, Harrison and his cast and crew are in heaven, living the classic Park City indie-filmmaker fantasy. "It's every filmmaker's dream to make something you love and not only not have to compromise but get it picked up anyway. And, what's more important is to find an audience that loves it," Harrison spills over with enthusiasm. Even if the film doesn't go over big in Peoria, here in Park City -- surrounded by celebrities and money-hungry executives and indie filmmakers lusting after his success and sold-out audiences -- Harrison has got his groove.