The Divine Miss M tackles an icon her own size in this frothily enjoyable (if highly fictionalized) yarn about the life and loves of celebrity novelist Jacqueline Susann. 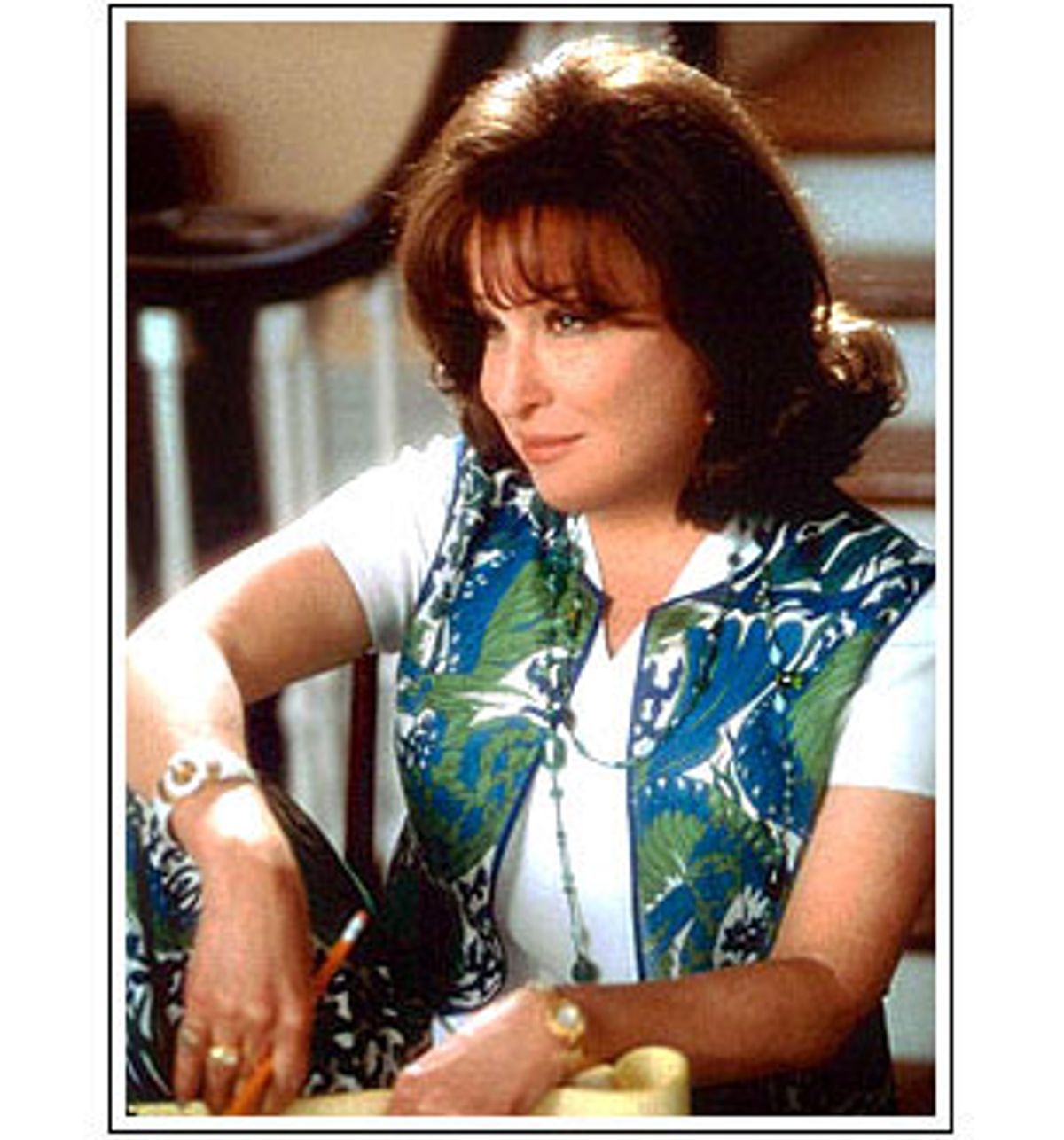 Andrew Bergman's casual but heartfelt biopic about Jacqueline Susann is a cupcake of a movie, a sweet and lightweight little thing that's all but served up in a ruffled paper cup.

It isn't the picture that could have been made about Susann's life. "Isn't She Great" barely touches on the passionate and unruly feminist underpinning of books like "Valley of the Dolls" -- books that were devoured eagerly (and rightly) for their lively dialogue and juicy love scenes, but that also dealt forthrightly with women's need and desire for sex, and, sometimes, their fear of it. "Isn't She Great" alludes to the way the outspoken and boisterous Susann gleefully rattled the cage of the stuffy establishment, but it does little more than smile down cheerily at her for it: Here, her ballsiness is just another quirky and lovable thing about her, like her fantastic jewel-toned Pucci outfits or her adoration of her poodle, Josephine.

But if flattery can't get you everywhere, it does get director Bergman (whose previous films include "Honeymoon in Vegas" and "Striptease") and screenwriter Paul Rudnick ("Jeffrey, "In & Out") somewhere. They're entranced by the sheer fabulousness of their Jackie (Bette Midler) and her devoted husband and agent, Irving Mansfield (Nathan Lane), and after a shaky start, the one-liners -- and the Pucci -- start whizzing by so fast and furious that it's hard not to be tickled by them.

"Isn't She Great" has some trouble establishing its tone at first: We see Midler's Jackie as a struggling Broadway actress in the 1950s, stuck as often as not doing food demonstrations in supermarkets, but the scenes' cartoonishness plays more like restlessness. We're not quite sure what the movie wants us to think of Jackie, so we're left wandering through a kind of kitschy haze, chuckling now and then at her humble beginnings but not having much of an idea where we're headed.

But the story moves along quickly, driven by Irving's tender and funny voice-over narration. In the movie's terms, and probably in real life as well, Irving is the perfect counterpart to Jackie's flash and filigree, like an elaborate frame that doesn't fight the bold picture it encircles, but doesn't shrink in proximity to it, either. In the movie's version of the story, Irving, a New York press agent, is besotted with the young actress Jackie, eventually approaching her and asking if he can represent her. Jackie, who longs to be famous more than anything, takes him up on the offer, and eventually the two marry and settle into a posh existence in a gilt-ridden Manhattan high-rise. Irving really does try to cook up ways to make his beloved famous, eventually latching onto the idea of turning her into a writer.

Jackie takes to the task with relish -- we see her decked out in a writing ensemble that includes capri pants and leopard-print mules -- and then she and Irving start knocking on doors, trying to sell her outlandish and rather badly crafted completed novel. One publisher, Henry Marcus (the nattily amusing John Cleese), obviously attuned to the air of change floating around in the mid-'60s, takes the bait, assigning a dubious editor, Michael Hastings (David Hyde Pierce, the kind of actor who can infuse any stuffed-shirt character with effortless charm, which is exactly what he does here), to the task of polishing the manuscript.

From there, "Isn't She Great" is a whirlwind of fabulous outfits and jokes flung like fireballs, driven by Midler's sass and Lane's consistently amused restraint, as Jackie's book climbs the bestseller list and she grabs the notoriety she's always craved. To the movie's credit, it doesn't shrink away from the difficulties Susann faced in real life: She gave birth to a severely autistic child, and her devotion to him, as Midler portrays it, is touching. Susann was diagnosed with breast cancer in 1962, even before she began work on "Valley of the Dolls," and it finally took her life in 1974 at age 56. "Isn't She Great" doesn't dwell morbidly on Susann's illness, but it does capture the way Susann refused to let it stop her.

As you'd expect, though, "Isn't She Great" mostly plays fast and loose with the facts. Henry Marcus is a stand-in for Susann's real-life publisher, Berney Geis, and the Michael Hastings character is a composite of two editors: Don Preston, who edited "Valley of the Dolls," and Michael Korda, who edited "The Love Machine" and whose article in the New Yorker was the basis for Rudnick's script. (Barbara Seaman's Susann biography, "Lovely Me," may have been an uncredited source as well.) The picture doesn't address Susann's bisexuality at all, and rumbles quickly over the later portion of her career.

But "Isn't She Great" works well enough as a fable about love and self-promotion, if perhaps not exactly in that order. Every actor brings some verve and vigor to the potluck: Stockard Channing is hilarious as Jackie's best friend Florence, slinking her way through some of the best lines in the movie. Midler has enough vivaciousness to capture Susann's spirit, and she never lets her performance veer into brassiness. Her timing is impeccable, and it makes almost every joke in "Isn't She Great" sing. When Hastings whisks her away to his family home in Connecticut, it's a thunderclap meeting of WASP reserve and Jewish energy; Midler's Jackie gets a gander at the white columns adorning the house and asks, wide-eyed, "They got slaves?"

And yet Midler can't walk off with the movie alone: Lane's lovely Irving goes hand-in-hand with her every step, and in the end, his characterization might even be more memorable than hers is. Lane is blessed with those classic vaudeville eyebrows. They practically know how to tell a joke by themselves, just by changing their slant by half a degree. But what makes him so remarkable is that, even within the broadness of his role and the overarching, at times almost overwhelming, broadness of the picture itself, he manages an astonishing emotional delicacy. As Lane plays it, Irving's devotion to Jackie isn't just a silly kind of slavishness; it's the very substance of his life.

Midler can pour loads of joy and exuberance into the character of Jackie Susann, but in the end it can't measure up to what we see reflected in Lane's view of her. Every time he repeats the movie's catch phrase (its title, for God's sake), it's offered as a hypothetical question, an affirmation of the constant delight Irving takes in Jackie. He never lets the line get tired, because he never gets tired of saying it. Lane's sweetness, his naughty wiliness (as when he exhorts a busload of schoolchildren to tell their mommies and daddies they want "Valley of the Dolls" for Christmas, adding, "It's better than milk!") and his dapper charm all make his performance wonderful to watch. But it's his way of looking at Jackie that makes her larger than life. There's loads of affection in "Isn't She Great." The very best of it is written in Lane's eyes.