After Seattle, a world trade lovefest 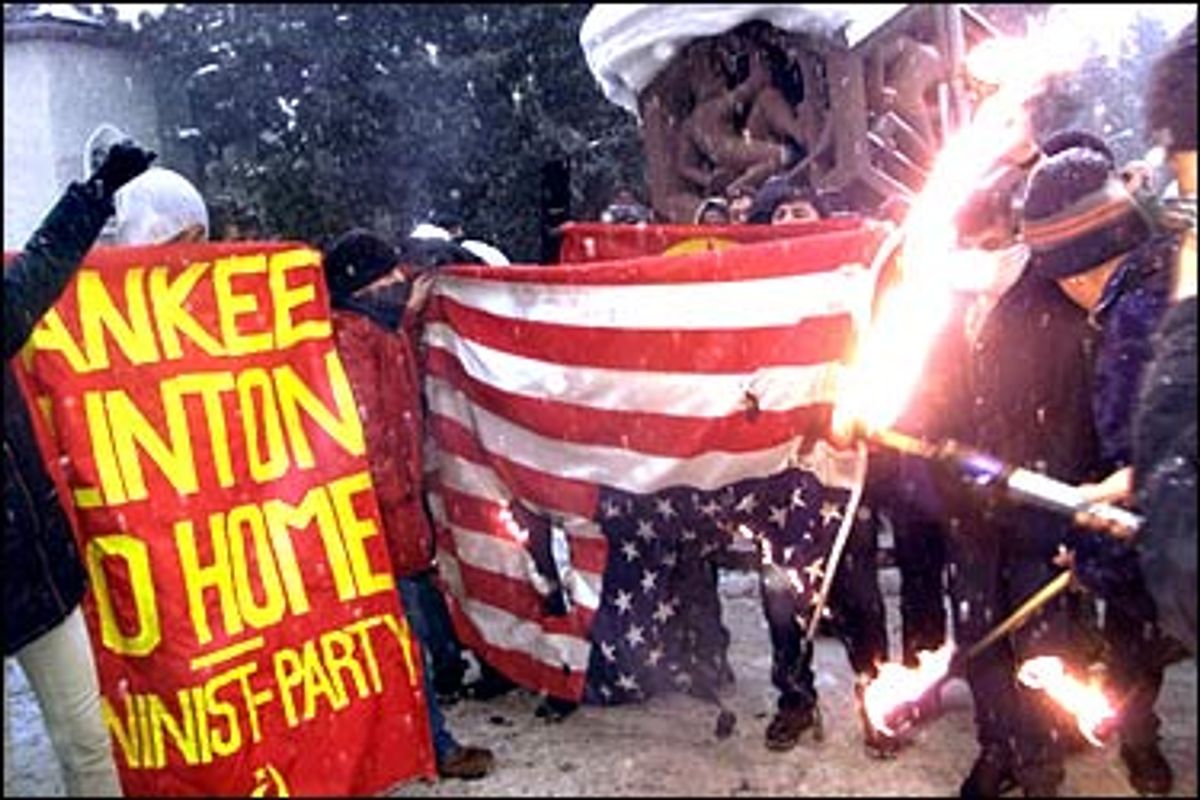 Protesters swarming the snowy Alpine village street toward the World Economic Forum on Saturday afternoon answered one question hanging in the air since Seattle. Yes, the anti-corporate, anti-globalization, anti-U.S. elements that were galvanized by the World Trade Organization demonstrations remain energized. And they are convinced they now have an international audience for their message.

Inside the conference, President Clinton indicated that he heard that message loud and clear. In a speech to the assembled CEOs, functionaries, writers and non-governmental-organization activists invited to the meeting, Clinton heralded a surprising shift in the U.S. attitude toward the expansion of global trade. "Those who heard a wake-up call in Seattle got the right message," he said. "I do not agree with those who view with contempt these new forces seeking to be heard in the global dialogue."

The bottom-line message of the Seattle protests was an economic critique of the globalist vision, one that raged against systems and trends that are widening the gaps between the world's haves and have-nots. In Davos, a much smaller number of protesters, approximately 500, hammered home the same message with familiar slogans. Several protesters smashed the windows of a McDonald's restaurant less than a mile from the conference hosting Bill Gates, Steve Case and various other symbols of corporate gigantism, an act captured by the cameras and given prominent play on CNN. But the message of Seattle was conveyed even more profoundly in Clinton's own speech. It's still not clear whether he's serious about the election-year gesture of bringing environmental groups and labor unions into the evolution of international trade policy.

Clinton proclaimed, "We have got to reaffirm unambiguously that open markets and rules-based trade are the best engine we know to lift living standards, reduce environmental destruction and build shared prosperity. This is true whether you're in Detroit, Davos, Dacca or Dakar." He lingered after his speech for half an hour, shaking just about every hand in the place and doing that lean-in-and-listen thing.

He defended free trade but also warned, "Don't leave the little guys out" and said, "Trade can no longer be the private province of politicians, CEOs and trade experts." He warned business leaders that labor and environmental groups have to be seen as more than nuisances to globalization deals. He mentioned AFL-CIO President John J. Sweeney three times in his Davos speech, more than anyone else, and Sweeney could not help but be flattered.

This speech might have put Clinton at odds with leaders of developing nations who do not want rich countries telling them what labor and environmental standards to enforce. And it might have confused the debate in Washington over trade deals on China, Africa and the Caribbean basin -- deals that were negotiated before Seattle prodded Clinton to start including labor and environmental groups. But Clinton's focus was clear. He seems to be hoping these new invitees to the table will tolerate the previously negotiated deals in exchange for the promise of substantive input on future ones.

Taking the podium, Sweeney spoke of globalizations's "tremendous potential to lift people around the world. But financial crises are growing more frequent and severe," he added, pointing to United Nations reports on the growing disparity between the wealthy and the poor. "This means that the seeds for rejection of globalization are in every political system, in developed nations as well as developing nations." He invoked the image of Seattle's street protests, with their alliance of disparate groups.

Sweeney diplomatically tied the anger of protesters to that of delegates from developing nations, "who felt just as locked out as the demonstrators. If we care about equitable, sustainable development, then the impact on people -- not only incomes but the environment, health, food safety, debt forgiveness and democratic participation -- can no longer simply be left to chance."

Clinton's presence at the gathering -- he is the first U.S. president to come to Davos in the event's 30 years -- did more than raise the stature of the forum. It drew protesters from Italy, France, Germany and elsewhere in Switzerland. A local environmentalist paraglided over the conventional hall trailing a banner "WEF: decide with your heart." The confused, panicky Swiss police, many called in from Zurich, finally brought the march to a halt several hundred meters from the forum itself.

Hours before the protest, skiers and townspeople walked past bored policemen stationed with their machine guns here and there in clumps, and kidded them about their boredom. It seemed a big joke, the idea of a protest in this calm, exclusive ski village. Even when the protesters sauntered up the main street, they didn't have much to do but throw snowballs, not exactly a textbook strategy for provoking the cops into a violent outburst that could be used on TV. But as it turned out, some snowballs were snow-covered bricks, and later one Swiss policeman was brought down by a bloody head wound.

Townspeople crowded windows along the street, fascinated by the commotion if also a little appalled by the unruliness of it all. Many of them thought there was something to the anti-globalization message.

"I think 95 percent of them are chanting and making noise, but not militant," said retired Davos resident Peter Putscher. Any misgivings about the spray-painting of walls and other mischief did not obscure his belief in the larger message of the demonstration. "This is a follow-up to what happened in Seattle, and I think it is good that this helps make a discussion. In Switzerland, we have peace and quiet, it's a little country. But when you go to other countries, it's something different."

Post-Seattle, protests of globalized trade carry an almost automatic resonance. But the protests at Davos point out the difficulties in generating a consistently articulate message and presenting it in a way that will continue to get attention. Pulling down the American flag from a conference hotel and burning it in the snowy street may be great for getting the blood flowing.

But the Davos protesters and their kindred spirits should feel at least as much of a challenge as the executives inside the meeting to come to terms with the developments in negotiations. Their success at continuing to build on the legacy of Seattle may hang in the balance.