Director Sofia Coppola talks about her film adaptation of "The Virgin Suicides," her proud father and Vincent Gallo's sex life (sort of). 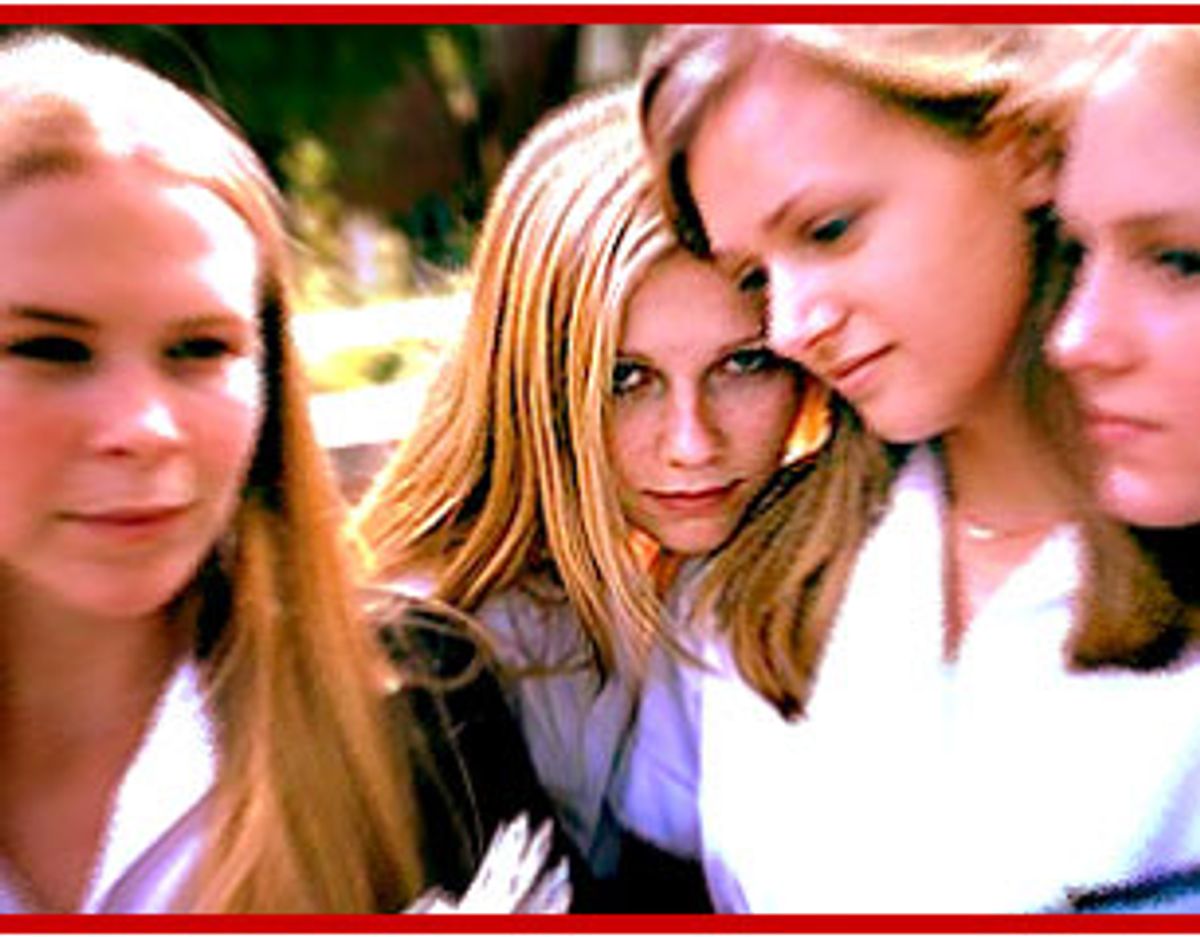 "The Virgin Suicides," based on Jeffrey Eugenides' acclaimed novel, is a suburban tale about five teenage sisters and the tragic domino effect set off when the youngest kills herself. Kathleen Turner and James Woods play the upstanding, if oppressive, mom and dad, healthily concerned about their daughters and questioning of their own parenting skills. Partly told through the collective narration of several goofy boy-suitors who find the family and the suicides of the title somewhat difficult to comprehend, screenwriter and director Sofia Coppola's first feature develops into a dark, ethereal -- and at times dreary -- fable that challenges the banal stories seen in other cookie-cutter comic teen love movies.

Coppola, best known as Francis Ford Coppola's daughter and for her lackluster performance in "The Godfather Part III," was attracted to Eugenides' novel for its classical feel, the way the author placed the story squarely in the 1970s but made it seem almost timeless. But from the earliest pairing of Coppola and the movie, which played here at Sundance and will open in April, the cheap shots and personal attacks against the director have been unusually vicious, even by Hollywood standards. Those closest to Coppola, however, have helped deflate the criticism. Woods -- an actor notorious for not getting along with his directors -- has been calling Coppola one of the top five talents he's ever worked with. "She's like all good writer-directors," Woods said at a Sundance dinner celebrating the film. "Like Oliver Stone."

Coppola arrived for our interview flashing a killer white smile and a flawless diamond engagement ring. Nervous and press-shy, she came off like a slightly over-privileged, arty girl next door -- not unlike the untouchable young women in her picture.

James Woods told me that you were one of the top five directors he's ever worked with.

I've heard him say that. I'm not agreeing, but he's very encouraging.

How does it feel to be ranked with Oliver Stone, Harold Becker, Sergio Leone and Martin Scorsese?

It's pretty nice. Very nice of him. Whenever I feel down, I go and talk to Jimmy. I'm so insecure. I'm excited that he is so supportive of the movie. It's nice when you're a first-time director and you have someone like that, you know?

With "Virgin Suicides," have you finally found your mitier?

Directing? Yeah, I think so. I spent most of my 20s worrying, "Oh no. I don't know what I want to do" and "I'll try this and try that." It's really huge to find something that you really enjoy, something that you can really contribute something to. And I really love doing it, and I feel like it's something that combines so many other things that I love.

Things like photography and music and design. You get to do all of them.

How old are you now?

Your marriage [to director/actor Spike Jonze] came along with your career breakthrough. Are you happy? Is it all good?

Yeah, it's been an exciting year, and I'm glad that my husband has been successful with his film ["Being John Malkovich"]. We both shot at the same time, but you know, it's been exciting to have been a part of that. And now to have our premiere after working so long on this movie, to finally get to show it to people -- that's exciting.

How did you come to such a fulfilling stage in your career?

This is the first time I've really stepped up to bat and put myself wholeheartedly into something and really tried to do things. This movie is the most I've ever put myself into something. And I'm so vulnerable about that. I went to art school. I was studying liberal arts, and then I went off and did "Godfather III." And then after that I went to Cal Arts [California School of the Arts] and studied fine art. And I got into photography because my friends were photographers. I think I'm curious, and I would ask questions. We were always making little short films, and I made video movies as a kid. I was always interested in that, but having my dad being a such a huge figure in that area, it probably took me longer to come to the idea that I could direct.

What have been the disappointments in your life?

I don't know. I mean, definitely I've had disappointments. I think a lot of it came with not knowing what I wanted to do, and trying to figure out my identity.

You mentioned "fear." Was that debilitating for you?

I think it's scary to put yourself out there, especially when your family is in the public eye. But I mean, at some point you have to forget all that.

I don't know. I just sort of put all that aside, and felt so strongly about making this movie.

Going back to 1994, when you were doing that short-lived television show "High Octane," it seemed a strange marriage between Comedy Central and that particular show. Had it gone past the four episodes that aired, it might have succeeded as some decent journalism.

It wasn't really a comedy show, but someone had a production deal through [Comedy Central], and so we got financing and a deal through them. At one point, they [network executives] actually said, "Well, it needs to be funnier." Well, it wasn't meant to be a comedy show. The idea was to make a video magazine, and we had access to people -- we could get Martin Scorsese to come on and talk to us about his favorite films. On talk shows people are promoting things, but we just wanted to have a video magazine of stuff that we were interested in.

Around that time, you and Zoe Cassavetes were into the '70s thing. And that seems to have rubbed off into your movie. Why the '70s?

I kind of lost my interest in the '70s because I did costumes on the movie "The Spirit of '76" back in '89. And back then it was really funny to us. You know, people dressing outlandishly. But for this story, the book took place in the '70s and I wanted to be accurate. And because of the memory aspect, I didn't want to make it contemporary. But I tried to -- I wanted the whole '70s style to be in the backdrop and more subtle -- as opposed to, you know, that joke about orange bellbottoms that's been done a million times. And I thought that the story had a kind of timeless quality that I wanted to work with. I loved using all that stadium rock.

Yeah. The band 10cc was choice. It was really mesmerizing in that while it seemed to defy "period," at the same time, it took me back under the bleachers in 1976. It also doesn't isolate it to a period that other generations can't identify with.

I think that even the kids in the movie identified with it.

You were obviously compelled by the book. What other books are on your top shelf?

"Lolita" was one of my favorite books. That was one of the books that I read when I was younger that made me want to read. It was so funny and great. I love Nabokov. And then, you know -- "Madame Bovary," "Of Human Bondage" ... I always liked the classics. I like classics and epic love stories. And then when I read "The Virgin Suicides," it was a classic, and you don't read that many contemporary ones that feel like that.

Yeah. I have a company with some friends. We make clothes, and I did costume design when I was younger.

Does the "daddy's girl" stigma surrounding this project bother you?

Of course I suspect that, and it concerns me how I'm going to be seen. I can't pay too much attention to that, but I hope people see the film for what it is outside of that.

I was hearing things like "Hey. Look for Spike's fingerprints all over that film."

That's stupid. Well, maybe people think if you're a girl -- well, I don't want to make a statement like that. Look, we were making different films at the same time.

Your father visited the set. Was he helpful, or was he just a proud father?

He was just a proud father, and beforehand he was helpful. I mean, we talked a lot about filmmaking. He gave me tips beforehand. He emphasized not using a video assist. Instead, he suggested that I stand by the camera. He does that.

Were there any frightening moments during production?

Yeah, when I saw my first rough cut.

Given the overt subject matter of suicide and using glamorous girls, do you worry about how troubled youth might respond to the film?

Well, the story is not really an exploration of suicide. It's not really about that. It's using it as a metaphor for these boys, you know? Confusion, and the loss of innocence, and growing up. It's not in a realistic style. I think it's clear that it's not real, and that we tried to make it abstract.

But it's unfortunate that so many teenagers today live in, and live out, dangerous fantasies.

Yeah, I think that's a big problem in our country today. But I don't think the movie is about that, and I think that kids know it's metaphorical.

Do you think that there's a moral responsibility in making even a fictional film like
that?

Sure. Of course I would never want to make anything that I thought would be harmful. But they say that the biggest problem with suicide is that nobody talks about it. It's a taboo subject. So, you know, maybe if people start talking about it, it won't be such an under-the-table topic. My emphasis wasn't to make it about that. And I liked that the book left it unanswered, because there are so many things in life that you can't explain. No matter how hard you look, you can't find an explanation for it. And I think that's what I liked about the story.

Tell me if this is true or not. Tell me straight. Are you doing a documentary on [actor/director/underwear model] Vincent Gallo's love life and his lovers? Male and female?

Um, not officially. I don't want to say anything right now, but I'm talking to him about doing a portrait.

It's such a wild idea though. Have you shot anything?

I don't want to talk about it. I would if you weren't a reporter.

Los Angeles writer Mark Ebner has written for Spy, Premiere and Details. This is his ninth Sundance festival.