"On the Rez" by Ian Frazier

In an instant American classic, a great writer zeros in on the Oglala Sioux (as much as he can zero in on anything). 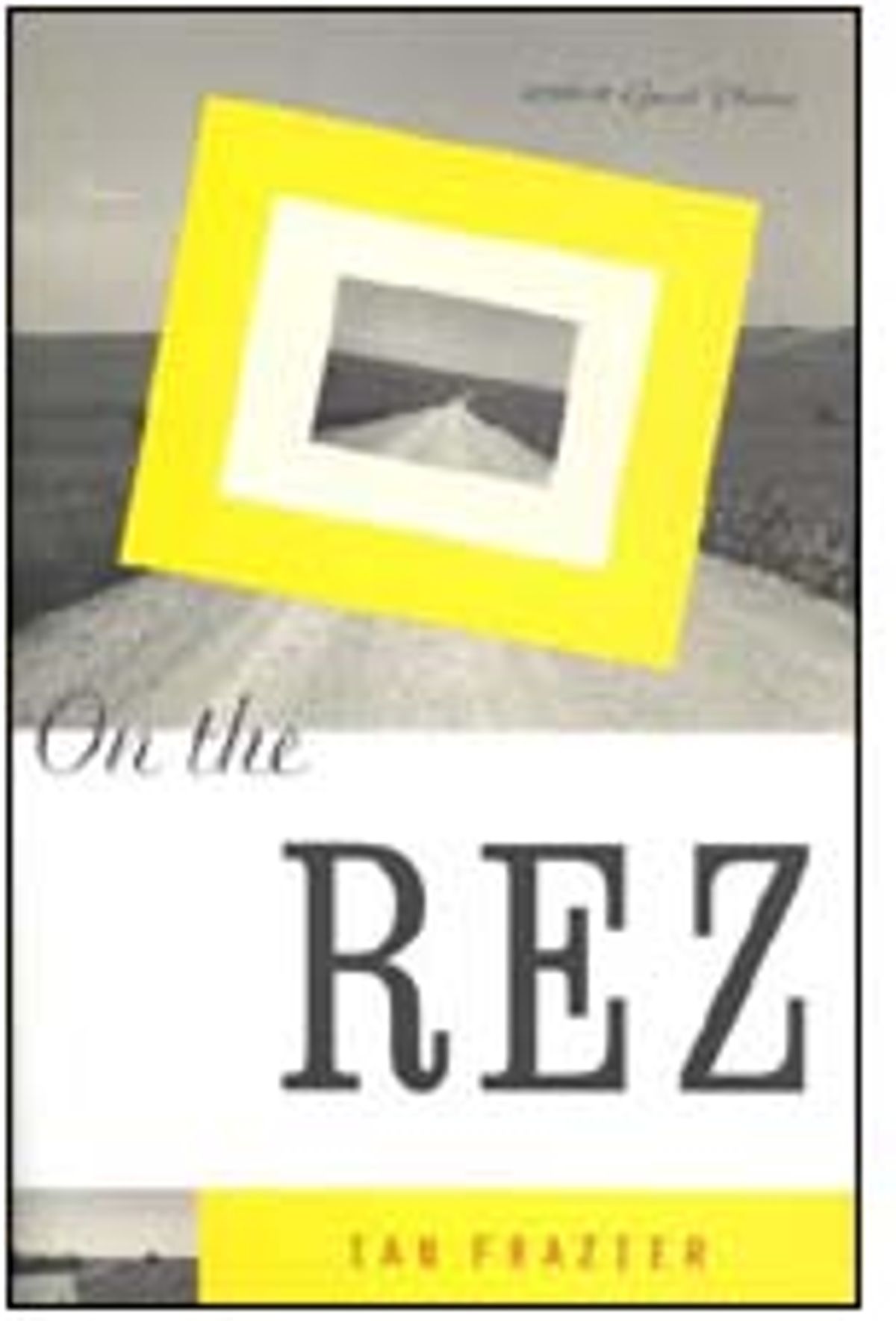 Everything that's right about Ian Frazier's nonfiction can be summed up by two sentences that occur late in his new book, "On the Rez": "Reader, books are long, and I know that even the faithful reader tires. But I hope a few of you are still with me here." When was the last time you encountered a contemporary writer who addressed you as "reader" without irony, who regarded you not as a presence to be taken for granted but as a relationship that needed tending?

It's fitting that Frazier extends this consideration to his readers. His writing, in such books as "Great Plains" (1989) and the magnificent "Family" (1994), is about a willingness to engage with other people, to experience (and accept) them as they are rather than as you wish they would be. Decency is its common coin. I won't say "common decency," because Frazier's type of decency is anything but. And yet he writes as if the respect he shows his subjects, as well as his readers, were the natural state of human affairs and anything else would be a deviation from the norm.

Frazier is old-fashioned in the best sense. (He even wrote about still working on a manual typewriter in an Atlantic Monthly piece a few years back.) He's determined, through either stubbornness or just temperament, to let as few of the blockades of modern life get in his way as possible. Open his books and you find yourself in an America where people still talk to their neighbors (and this has been as true of his writing about Brooklyn as about the Great Plains), where community life is conducted in post offices and convenience stores and at high school sporting events. That attitude might make Frazier seem like a square if his writing didn't reveal his loopiness (which comes into full flower in his humor pieces). Frazier's vision of America is no cozy Norman Rockwell neverland; it's more like David Lynch land, a place where the ordinary seems deeply strange and fascinating and, finally, anything but ordinary.

In "On the Rez," Frazier zeros in on one of the subjects he touched on at length in his rambling tour "Great Plains": American Indians. As much, at least, as he can zero in on anything -- typically, this account of Frazier's friendship with an Oglala Sioux named Le War Lance and of his visits to the Pine Ridge Reservation in South Dakota reveals him to be interested in just about everything. (Empires could rise and fall in the time it would take him to go through a flea market.)

That wide-ranging interest can sometimes make for a meandering read. Frazier is a list maker and a plaque reader. "On the Rez" opens with a genuinely surprising prologue that lays out the case for Indian influence on American culture, in the process pointing out the condescension in the well-meaning (and, Frazier contends, wrong) pieties about how Indian culture has been obliterated. It's a brilliant piece of writing, but it may set up false expectations, since the essay form of stating an argument and then making a case for it isn't the way Frazier writes.

He's much more interested in just recording his comings and goings at Pine Ridge, in following the ups and downs of his often testy friendship with Le War Lance as they make trips to pick up beer or to repair one wreck of an auto after another or to visit some relative or other, and seeing what that approach will reveal. (One thing it reveals a lot about is Frazier's decency. I doubt that there are five readers of "On the Rez" who would put up with War Lance's drinking or freeloading the way Frazier does.) It's a method that demands the reader's patience but also rewards it, getting at the texture of life in a way that a sociological analysis or a straightforward inquiry into the place of the Indian in contemporary America never would.

Toward the end of the book, totting up the problems that bedevil the Indians on Pine Ridge -- poverty, alcoholism, suicide -- Frazier writes, "But beneath all that is something bigger and darker and harder to look at straight on. The only word for it, I'm afraid, is evil. News stories emphasizing the reservation's 'bleakness' are actually using this as a circumlocution for that plain, terrible word." And here -- in his understanding of the limits of cause-and-effect explanations and his ability to make that statement without a trace of hysteria -- is the strongest echo of the 19th-century literary sensibility that so often seems his model.

But it's not evil that hangs over this book; it's a sense of plain perseverance. Much of that feeling has to do with the three chapters near the end on SuAnne Big Crow, a Sioux who died a hero at the age of 17 after leading her high school basketball team to a state victory; the championship had much to do with softening the tensions not just between the Sioux and the white teams they often played but also between the bitterly divided political factions on the reservation. Characteristically, Frazier stumbles on SuAnne's story when he happens into a youth center named for her, and he turns it into a small classic of empathetic reporting.

For Frazier, SuAnne's story (too good to spoil by retelling it here) is bound up with the notion of heroes -- another of the unfashionable or outmoded concepts he embraces without embarrassment. In his eyes, SuAnne exists simultaneously as legend and real person, within an Oglala tradition of figures like Crazy Horse, who was "just a guy you saw around from time to time" but also "the near-magic warrior." For those of us not used to having legends spring from our midst, Frazier compares the phenomenon to having your childhood fantasy of your father as the strongest man in the world confirmed by seeing him win the Olympic gold medal in weight lifting -- astonishing and inspiring in a way that makes us aware of our best possibilities.

SuAnne's story is also deeply bound up with the notion of community that runs through "On the Rez." She lived within the framework of her community but also at the limits of it, pushing it, showing it that it could contain more than anyone had imagined. By articulating a vision of life with her actions, by making people ask why they should settle for less, she elevated her community. And so for Frazier, finding SuAnne becomes almost a form of karmic payback: An affirmation that the humane curiosity he extends subjects is justified, that it has, at last, found a story worthy of it.