Teri Thornton went from the "greatest voice since Ella Fitzgerald" to a nobody and back. When will she get her own VH1 special? 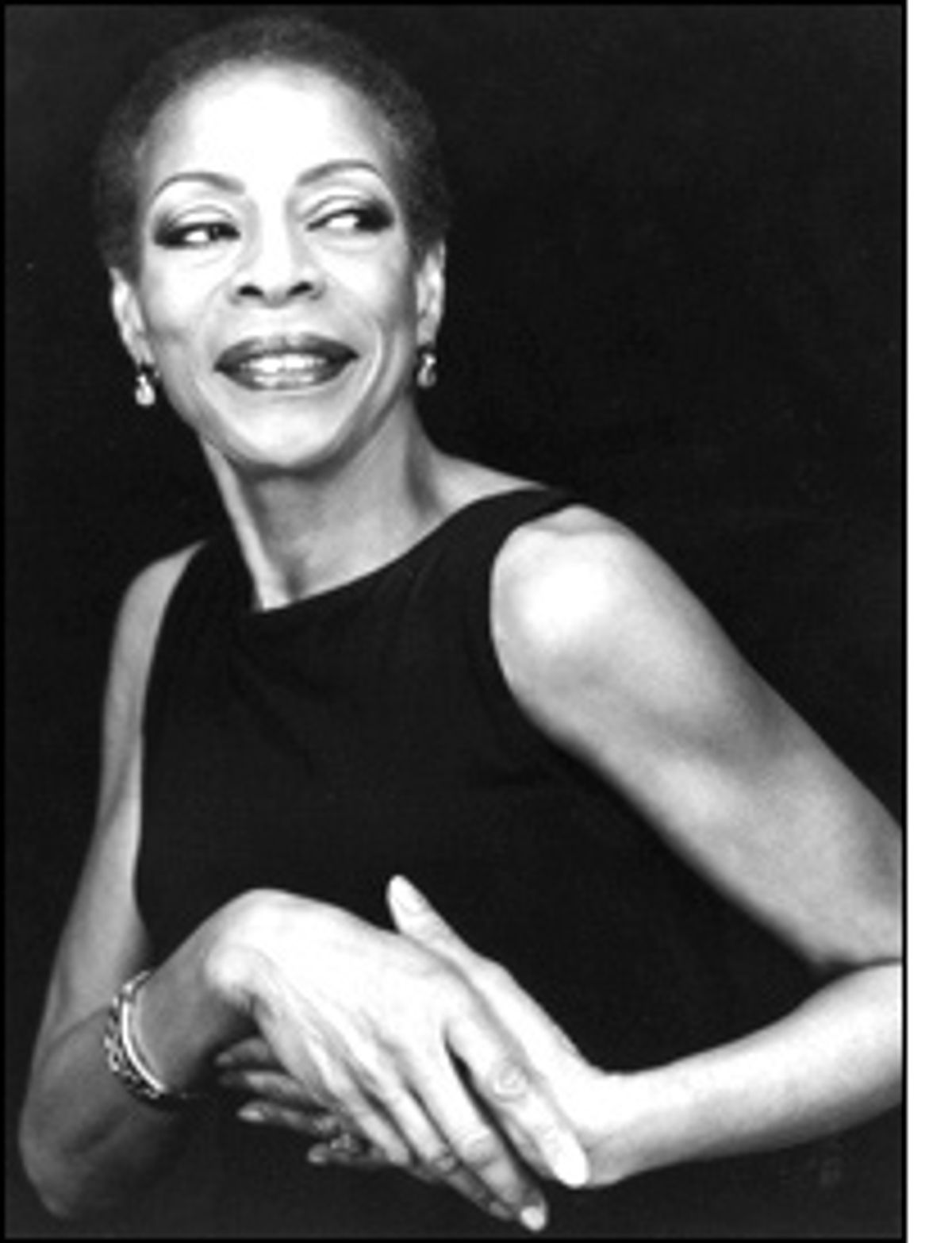 When jazz singer Teri Thornton won the Thelonious Monk International Jazz Vocals Competition in 1998, she had reached the second apex of the standard star trajectory. She rose, she fell and she had risen again. Her story certainly has tabloid allure: After a moment of jazz fame, she fell into obscurity, fighting cancer and general hard luck and trouble only to triumph again, flattening the other Monk competitors and moving her accompanist to tears.

But as evidenced by the 65-year-old singer's first CD in 36 years, "I'll Be Easy to Find" (Verve), and her performances in concert and on radio, Thornton's story is hardly her only appeal. Her sound dynamics are a marvel: She can make her voice clean, small and uncomplicated or thick, smearing her vowels across a line. She has a three-octave range, the extremes of which she uses sparingly, and great breath control. Even at her rowdiest, there's nothing undisciplined or sloppy in her singing.

At a concert at St. Peter's Church in New York last year she dominated the stage (in this case, an altar) with a feline sense of assurance and a voice full of humor, which made her ballads all the more moving. She wore long, dramatic scarves for each number, and sometimes accompanied herself at the piano. At one point, while singing "I've Got You Under My Skin," she took a cue from Cole Porter's lyrics and actually stopped playing, took long strides across the stage, drank water, went back to the piano bench and finished the song to the crowd's cheers. It was a fine demonstration of just how well she commands an audience after years of not having one.

Considering the profound fluctuations in her career, Thornton has probably examined the nature of luck in all its weird configurations: young and already being recognized luck as well as lousy, what were the odds of such bad timing luck. On the back cover of her new CD, she stands with her arms lifted in front of a set of concentric circles as if she is about to be lifted into the vortex of a tornado or, if she were in a movie, pulled into a fabulous dream sequence. In her life, both extremes of luck have been familiar territory.

Born in Depression-era Detroit, Thornton grew up on what she calls "easy listening music," Perry Como, Jo Stafford -- the big band standards and white radio fare that occasionally resurface in her recordings. Her mother hosted a weekly radio show, singing that week's requests. She had hoped her daughter would pursue classical music, but she was "strong on bebop," picking out radio tunes on the piano. "Race records hit the airwaves and you could hear black people singing on the radio -- the Ink Spots, the Mills Brothers, Dinah Washington," she says.

Thornton remembers jazz musicians like Barry Harris visiting her school and encouraging young players. But she doesn't think it was just school and radio that gave Detroit its particular sound, but the city's automobile-fueled economy that kept factories running through the night. "They were in constant motion, giving off constant sounds and rhythms. We learned a great deal subliminally and came up with something unique to Detroit or Michigan."

After going professional as a singer and pianist, she eventually arrived in Chicago in the mid-1950s, meeting up with the likes of Johnny Griffin, Cannonball Adderley and Sun Ra, who at that time was regularly appearing at Budland, a Chicago club. Reminded of Sun Ra's intergalactic origins, Thornton says simply, "In those days we just knew him as Sunny Blount." She says she's written her own collection of space songs and wouldn't mind recording them someday.

Norman Simmons, the weepy accompanist at the Monk competition (and longtime accompanist for Carmen McRae and Joe Williams), met Thornton at that time when she started singing with his band in Chicago. "When I met Teri, I was local, all the people I was dealing with were more of less local, but her skills were higher."

Simmons, Griffin and Adderley were sufficiently impressed that they persuaded Riverside, their label at the time, to record Thornton with producer Orrin Keepnews. (Adderley once called her the "greatest voice since Ella Fitzgerald.") She headed to New York, where Simmons wrote the arrangements for her first record, "Devil May Care." Nine of the best studio musicians available -- including Clark Terry, Freddie Green and Wynton Kelly -- backed up the little singer from Detroit, who, according to Simmons, was the only vocalist Riverside ever recorded.

Simmons wrote arrangements that on some cuts have a small ensemble feel; on others the group seems to stretch out behind Thornton, playfully nodding to the big bands her mother favored. On the record, she pronounces each syllable forcefully with a slight aloofness, a distance now gone from her singing. Simmons puts it this way: "When you're young you concentrate on details, technique. You've come to New York, you want to impress people."

When she thinks back to it, she sounds flush with the anxiety of a callow newcomer. "Oh, golly, I was nervous. My tonsils had swollen. It was all a nervous reaction," she says. But on the record she sounds anything but green. She'd already spent years singing and playing in clubs, and, by Simmons' account, musicians respected her because, as a pianist, she understood the intricacies of the music they were playing. "A lot of times, singers don't get involved, but she was totally involved. Teri's ideas are in the arrangements too."

The next years Thornton headlined at Birdland, made several appearances on "The Tonight Show," sang with Duke Ellington and Ella Fitzgerald on the "Today" show and eventually recorded "Somewhere in the Night,"the theme song for "Naked City," a hard-bitten drama series of the '60s. The record first became a hit in New York, a rarity in the pop music industry at the time. The song became the title track on Thornton's second album and eventually led to a record deal with Columbia.

Tony Bennett, who was on the same label at the time, wrote the liner notes to her third album, "Open Highway." "She's endowed with perfect pitch, a three-octave range, solid training, and years of invaluable experience," he wrote. "All this has made her create here a great album."

But by the mid-'60s, her career came undone -- she was addicted to alcohol and had a series of bad managers, and her records were selling poorly. All of this, combined with the pervasiveness of rock-inflected pop on radio and vinyl, killed the Columbia contract and soon Thornton was back on the road. "Teri did a lot of drifting; she was all over the place," according to Simmons -- in Los Angeles, Detroit, New York.

For most of that period Thornton kept herself close to music any way she could, illustrating what James Baldwin once called "the terrifying economics of a singer's life." She worked as a booking agent and in music promotion. For a while she drove a cab in Los Angeles and sold her graphic paintings, which she calls "optigrams." She still sang and played piano. "I stayed prepared in case something came up," she says. Being able to accompany herself on piano made finding work easier. At the same time, she was performing many of her own songs: By the late 1980s she had written hundreds of them.

Then, in 1995, Thornton was approached by Suzi Reynolds, a manager she had met briefly years before. Reynolds became her manager and all-around support system, finding her bookings and eventually starting to plan and record the CD "I'll Be Easy to Find." But they hadn't been together long when Thornton was diagnosed with bladder cancer.

In an effort to keep spirits high, Reynolds entered her into the 1998 Monk Competition to be held in Washington three months after Thornton's surgery. Remarkably, for such a short preparation time, she competed against 300 other singers and won. For her last song she sang one of her own compositions, "Salty Mama," which has her hiring a posse to bring back the man who's hit the road, a raucous, endlessly inventive performance that is the last cut on the CD.

Since then, she has suffered from complications from her cancer treatments and has been living in the Actors Fund Home in Englewood, N.J., recuperating. Although she played for a week at the Village Vanguard in June, she wasn't well enough to perform there in October when her CD was released. But last week, she was back at the Vanguard, finally getting a chance to celebrate that long-in-coming record, selling out her Saturday night shows. Although she was clearly still weak, her confidence and abilities onstage were undiminished.

The CD is intended as a kind of diary of Thornton's musical and emotional travels since she was last heard on disk. Logically, she begins with a new rendition of "Somewhere in the Night" with a lovely arrangement, a low-key Billy May tribute by Howard Johnson. After showing what she could do with her old hit, she decided to give "the audience the Teri Thornton of today, someone with more experience." She draws on musical theater (Frank Loesser's "I Believe in You" and Gershwin's "It Ain't Necessarily So"); rhythm and blues (Thornton's own homage to James Brown, "Feels Good," and her "Knee Deep in the Blues," a send up of all the blues clichis she could think of) and ballads like the title song. Her singing today has a greater immediacy, fewer concerns about technique: in short, there are more complications, more sex, more loss. "I have a different sense of how I approach a song. It used to be, how precise is my intonation. Now I think, how believable is my reading?"

On "I'll Be Seeing You," the penultimate song on the CD, she sacrifices some vocal precision and control to come up with a baldly emotional reading, risking a lonesome cowgirl yelp in the last line. Underneath her vocal, she plays a wistfully traditional accompaniment on piano. "If you interpret the song as the writer meant it," she says, "you're talking about someone going to the great beyond." For those five minutes and 35 seconds, Teri Thornton is as protected from the quirks of chance as she'll ever be. When she sings there's no luck involved.