Education in 2100: A professor's memoir 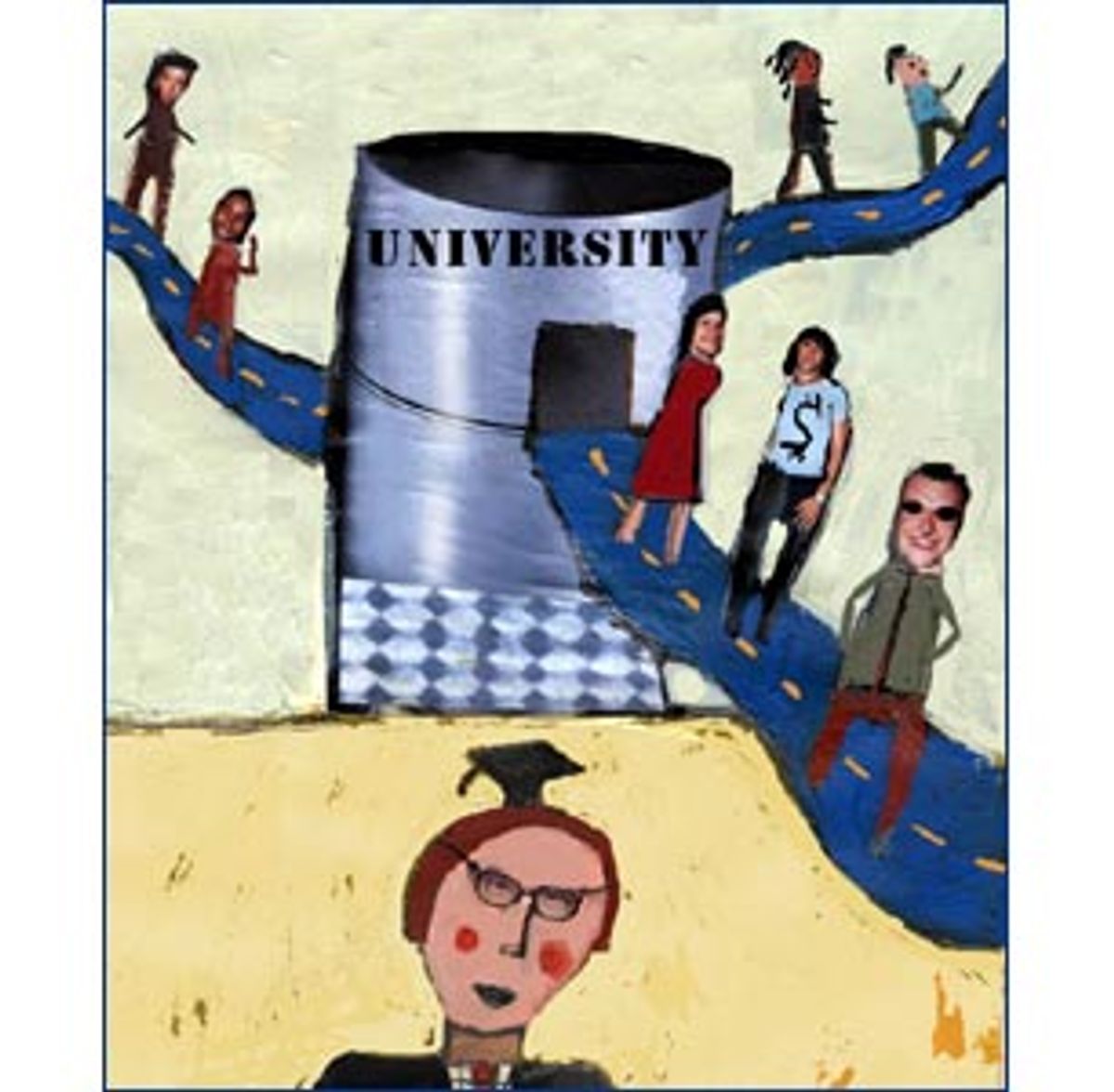 Turn-of-the-century college students always struck me as a little silly, whining about the perils of capitalism from the plush confines of an apartment furnished with Ikea, or blasting Rage Against the Machine from a Jeep Grand Cherokee. Apathetic and aimless as they were, however, they still entertained the notion that there was something better, something to strive for, that somehow, they could be part of the impetus for change. Not like today's students. Today's kids are cutthroats. They're mercenaries.

In most of the first- and second-world countries, the multinational corporations have taken over education as smoothly and efficiently as they took over the world economy. They offer specific training in lieu of liberal arts. They offer applicable skills instead of the ability to think. It's like vocational school for intellectuals. The new colleges churn out students with concrete skills. They turn kids into certified public accountants by age 20, into engineers by 19, into marketing experts in six months. Why have pre-law, pre-med or pre-business curricula, when you can just cut to the chase?

No one complains, because it's free. All you have to do is sign a contract saying you'll work for the company after you're trained. And why not? Everything is in place for you. A nice neat transition from high school to the workforce. There are no job applications or interviews, and starting salaries average in the six figures. How can any other university compete with that? It's free! For the first time in history, students are investments: living, breathing portfolios.

The new colleges don't pose questions that can't be answered. Who needs the big questions when you have the promise of $1,000-an-ounce olive oil, a Mercedes SUV, stock options and a Lear jet? Instead of asking life's eternal questions, the new schools substitute the vocabulary of the real world. Mergers. Margin. Downsizing. In the red. In the black. Overhead. Demographics. Target markets.

But the old guard of multinationals are a bunch of college kids at heart, and they want their replacements to uphold their legacy. So they left some of the old universities open. No one goes there except the corporate kids and a handful of rebels willing to spend 70 grand a year for a liberal arts education without the guarantee of employment. The corporate kids spend their four years messing around with astronomy classes and creative writing before moving into their parents' executive suites. The rebels do something else.

Just like 20th century pirates bootlegged new movies and hawked their tapes on the street, some students in the remaining colleges have begun recording lectures. With digital video cameras small enough to conceal in a shirtsleeve or a backpack, and laptop stations and Internet access at every lecture seat, students broadcast college lectures to the world. All the noise that the recording industry made in 2000 about MP3's floating around, that was just rock and roll. This is information, and it's up for grabs on the open market.

You see, third-world countries have been left to rot. The multinationals reasoned that they had to be isolated from the class envy of America. Why not move operations to places where everyone is poor and knows no better, where everyone will be content? The factories were built in the Philippines, the Dominican, in Haiti, in Cuba (once the immortal Fidel signed on for his slice of the pie, of course). As the executives began new invasions, they would joke that they were "phoning it in," referring to the fact that the daily wages of a Dominican factory worker were the equivalent of a payphone call in America -- 60 cents.

Even the third world has a fair amount of Internet access, though, and with the increasing educational piracy, what you get is a hundred street kids in Santa Domingo pilfering a Harvard lecture on classical philosophy from the Internet like they take penny candy from the corner market. You get a professor in Havana downloading the notes of a Stanford physics teacher before a classroom so teeming with students that the cockroaches are outnumbered and flee.

Beneath the egalitarian rhetoric of a global community and all of the other grandiose things that were supposed to accompany the online explosion, a silent riptide rages, tearing at the majority. It is the undercurrent of those to whom education is still a privilege, not a rite of passage. When America's students stopped being hungry, when the West decided that some countries were best suited for assembling tennis shoes, this was the time when these countries started taking back what they deserved.

The multinationals, for all their expansion, are only a part of a giant machine duplicating its parts, building a new skeleton for itself. The machine grows but it does not change. It doesn't know how. And so it doesn't know how to stop the growing masses accumulating against it.

The third world phenomenon of stealing knowledge from the Internet is spreading like wildfire. Well, not wildfire, exactly. You can put out a wildfire. You can attack it with hoses and have helicopters dump great basins of water on it. You can isolate it by cutting down the brush and trees around the fire. You can contain it. You can walk through the woods and find the cause, a cigarette butt, or scars of lightning on a tree. You can stomp out the remaining embers.

But with the Internet, you have the perfect wildfire. There are a thousand possible ways that the fire started. You can stamp and curse at the ground, but you will still be walking on a bed of coals. The Internet, after all, belongs to no one. It is not part of the corporate machine. The machine is part of it, the single spindly arm of an octopus with its tentacles wrapped tightly around the globe, the other seven arms beginning to learn their own strength.

Brian John Stempeck is an English major attending the University of Virginia.