Please, sir, may I have a mother?

Despite the WB's reputation as the teen-sex network, shows like "Dawson's Creek" and "Roswell" owe their appeal more to the damaged-family yearnings of a Brontk or Dickens novel than to sheer skin. 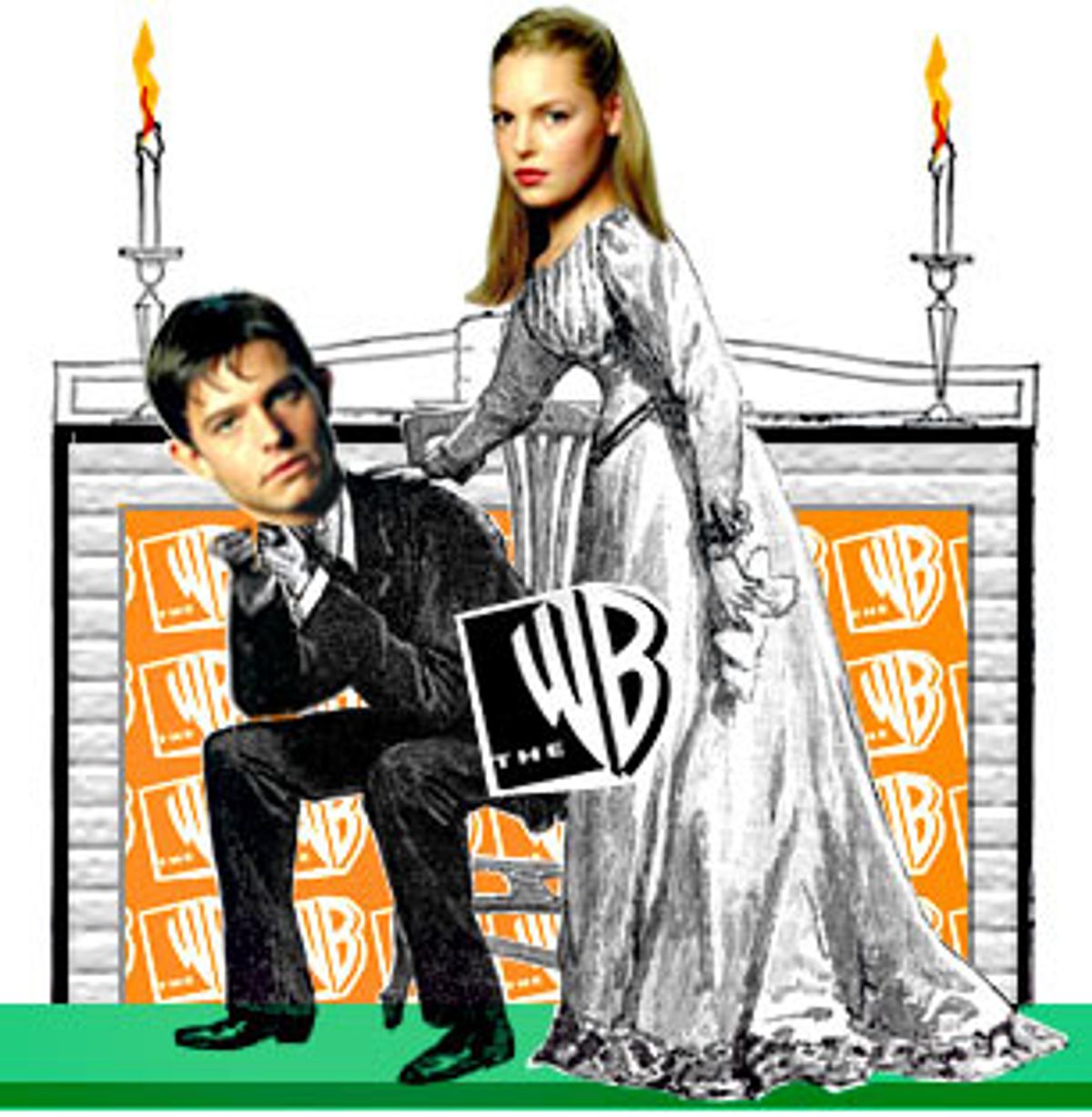 If all the hot young characters on the current WB network lineup invited their mothers and fathers to some sort of parents weekend, let's just say that it would not be a boon to the innkeepers of Television City. That is because an astonishing percentage of these characters' parents are dead. If they are not dead, they are gone, having skipped town years ago leaving their deserted progeny with only a photo to emote over and enough abandonment issues to keep them in guidance counselors forever. Or they are in prison or, worse, Palo Alto. Or, as in the case of the missing parents of the trio of extraterrestrial kids stuck in "Roswell," they're literally lost in the stars, assuming that the word and concept of "parent" even means anything on their home planet.

It's just as well that the parents weekend never happens anyway, as it would probably be lorded over by the squeaky clean preacher and wife from "7th Heaven," who would ruin all the cocktail hours by saying grace over their club sodas, causing all the mothers and fathers who had managed to escape cancer and incarceration to kill themselves, slitting their wrists with swizzle sticks.

Call it the "Party of Five" effect. Because the Fox show about the Salinger orphans proved that attractive youngsters who aren't particularly smart, funny or lovable could win a viewer's sympathy just by plopping themselves occasionally in the graveyard and telling their parents' tombstones about the latest in their jinxed little lives. A dead parent makes otherwise well-adjusted lookers seem exotic because they have actual concerns.

And so the WB, which has cultivated some of the most charming characters on network television, provides the three witchy Halliwell sisters of "Charmed" (dead mother, father abandoned them); Joey of "Dawson's Creek" (dead mother, father in jail for the second time after her supposed best friend Dawson turned him in for dealing drugs); and the two dueling stepsisters on "Popular" (Brooke's mom left, Sam's dad's dead).

The bad rap on the WB is that it hires only sexy teens to be sexy together, but I think that caricature comes from people who haven't watched it. The heroine of "Buffy the Vampire Slayer" has had sex twice in four years -- once with good vampire Angel, who was cursed to turn evil because of their night of love, and a one-night stand with a college boy who dumped her the next day. "Felicity," forever choosing between her crushes Ben and Noel, only did it once, with a relative stranger, and never got over the guilt. The kids on "Popular" set out en masse to lose their virginity in a single week and were so traumatized they ended up joining the cultish celibacy movement. If anything, sex on the WB, when it happens at all, has almost laughingly dire consequences. Family, on the other hand, is handled quite poetically.

I am often impressed by the WB's shows' depiction of the longing for family. That's how I noticed all the parents who had been disappeared. The "Roswell" aliens, for example, are surprisingly moving when they speak of their yearning to find out where they come from, displaying an un-teen zeal for family history unknown outside of Utah. Two of the kids, Max and Isabel, were adopted into a loving family and agonize over keeping their alien past from their adoptive parents. The other one, Michael, wasn't so lucky. He lives, Huck Finn-like, in a trailer park with a mean drunk father who, when Michael complains there's no milk for his cereal supper, screams, "Use beer!" During a recent episode, there was a heartbreaking moment: Michael looks hopefully at the kindly old Indian who's been helping the aliens decipher what few clues they have, and the Indian knows what Michael's thinking, having heard the beer comment, and has to crush the boy's hope and tell him that no, he's not his father.

It just so happens that Liz, who goes to high school with the aliens and carries a torch for Max, has no mother. But the show's treatment of her father proves a theorem about parents on television: If a parent is around and concerned, that equals comedy. Dead and gone equals tragedy. All the current family sitcoms, from "The Simpsons" to "Everybody Loves Raymond," find the yucks in proximity (Dad's a dolt, Mom's a nosy nag, ha ha ha ha ha).

While the aliens are haunting as they imagine their familial origins, Liz is stuck with one silly "Oh, Dad" moment after another, made all the more hilarious by the actor playing Dad -- John Doe of the legendary L.A. punk band X. There's a typical, even hackneyed scene when Liz's dad thinks she's buying drugs, and really her friend just gave her some echinacea to fight a cold. It's a nice twist that the man making such a square mistake is the sexy bass player who used to yowl the early-'80s nihilist rave-up "Johnny Hit and Run Paulene."

Series television, more than any other form, is perfect to explore family dynamics. Novels, even long ones, end. Movies are great at moments -- love at first sight, murder, that time Lassie came home. But family life unfolds over time. And the seeming monotony of TV is inherently equipped to deal with ongoing stories, not to mention ongoing quibbles -- Frasier's campaign against his father's ugly chair, Lisa Simpson's doomed attempts to enlighten her anarchic brood. To get the true story of a family, it has to be done over the long haul.

If there's a dead parent, his or her corpse can be trotted out in show after show to inject the dialogue of otherwise wisecracking teenagers with a dose of pathos. Nowhere is this more apparent than on "Dawson's Creek." Josephine "Joey" Potter, played by the luminous Katie Holmes, lives with her older sister now that, as mentioned, Mom is dead and Dad's in jail. Joey's appeal is that she is a true beauty trapped in a teenage girl's fidgeting skin. The restrained yet constant allusions to the way she mourns her mother offset the rest of her personality, which is smart and funny and a little too sarcastic for her own good. She is, like so many of the motherless children of the WB, straight out of 19th century literature. (Perhaps they should change the network's name to CD, for Charles Dickens. Please, sir, may I have a mother?)

I thought Joey's 19th century air was just coincidence, but the writers must think of her that way with purpose. In a recent episode, Joey was on a date with a pretentious college boy who took her to an astronomy party. Previously he'd already asked her what her favorite book was and she'd said "Little Women," because it was her mother's favorite. (She's named after Jo.) The boy made fun of her. Who knows why she went out with him after that -- especially since that adorable Pacey is obviously over the moon for her -- but this time they're walking on a beach and she tells him she's so hard-working and ambitious because she's afraid to fail. The college boy, with all the wisdom of his 19 years, muses, "I think sometimes that happens to girls who lose their mothers when they're really young -- they're really driven to succeed." She responds, "Like Madonna?" He looks down at her, sighing, "Well, I was thinking more along the lines of the Brontk sisters."