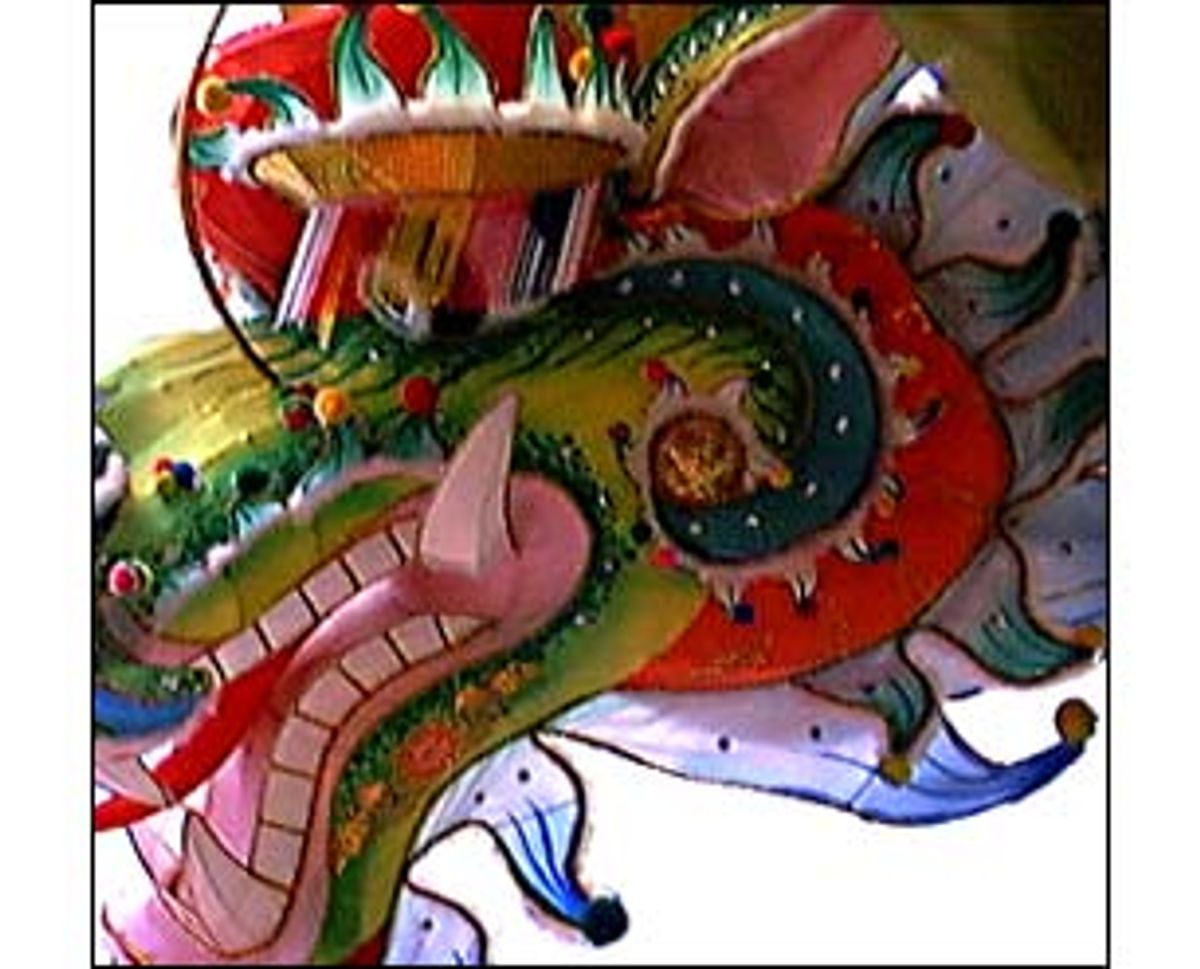 If you flew to Asia during the past week, you undoubtedly noticed that the plane was full and the airline could have sold standing room if the FAA allowed it. That need to be home that Americans feel around Thanksgiving is matched by the Chinese and many other Asian cultures around the Lunar New Year celebration that starts tomorrow, Feb. 4.

The most important festival in the Chinese calendar, New Year celebrates both the beginning of the New Year and the arrival of spring. A ritual cleansing of the home kicks off the celebration -- an undertaking that combines the idea of spring cleaning with the desire to rid the place of any evil spirits that may have moved in during the past year. Lucky messages are attached to both sides of the front door. A visitor from this world or the next would have a hard time missing the welcome.

A table is set up and covered with offerings for the gods. The three main meats of the Chinese diet -- pork, chicken and fish -- are always there. Candles are lit, incense is burned, family prayers are offered and a little wine is poured, just to keep up the spirits of the spirits.

When the incense has burned down about halfway, the gods are considered to have had their meal. Chinese gods have a great diet. They don't actually eat their food the way people do -- gods and ancestors need only inhale the food's aroma to absorb all of its nutritional and sensual elements. Eating, it seems, is not an essential part of their balanced diet. When the gods have finished, the remainder of the meal goes to the family and becomes everyone's dinner.

The foods of the Chinese New Year are chosen for their symbolic meaning. Green foods mark growth and red foods signify warmth and good fortune, the same colors and meanings we see in the West as part of the Christmas celebration. Lotus seeds, peanuts and pomegranates represent a hope for the birth of children during the coming year -- fruits with many seeds symbolize many offspring. If a married woman of childbearing age finds a dumpling filled with sugarcoated lotus seeds on her plate, it is a signal that she will have a son during the next 12 months. Recently, I heard that the widespread belief in the power of these foods has led to a movement advocating warning labels on their packaging.

This is the time for employers to thank their employees for working hard over the past months. Years ago, it was also the time for the employer to indicate any displeasure he was feeling. He would hold a banquet with a chicken in the center of the table, the head pointing toward someone who was going to be dismissed. Today, most bosses point the head toward themselves to avoid any misunderstanding and some of the larger corporations have turned to Chicken McNuggets.

The Chinese, like many other cultures, believe that what you need and enjoy in this world will be needed and enjoyed in the next. The way to send something from here to there is to reproduce the thing on special paper and then burn it. The fire transforms the essence of the object into smoke, which drifts up to heaven where it is reconstituted into its original form. The most popular use of this technique involves fake paper money. During the New Year's celebration, hundreds of billions of phony dollars will be transferred to the upper banks.

In 1997, I celebrated Chinese New Year in Taiwan and witnessed the most outstanding use of this technology. A BMW automobile had been perfectly reproduced in paper and was being flamed to a beloved grandfather by his grandchildren. And I thought BMW's European delivery program was sophisticated.

Chinese folklore says that in ancient times, "Year" was a fearsome beast that would come out of the mountains on New Year's Eve with an appetite for human flesh, determined to find a tasty villager. As a result, a number of monster-avoidance techniques are recommended during the New Year's Eve period. No. 1: Stay up all night so you can keep a lookout for suspicious-looking characters who might want to eat you. No. 2: Hang strips of red paper on your door -- Year hates red. And No. 3: Set off the noisiest firecrackers you can find. Year is subject to migraine headaches and the din will send him back to the mountains.

When morning comes, everyone congratulates everyone else on not having become Year's midnight snack. A ritual offering of respect is made to family ancestors -- generally spirit money or luxurious foods. Then the gods are venerated and the younger members of the family show their respect for the older generation by turning down their CD players and bowing. The family then visits an incense-filled temple and goes to see friends and relatives to deliver a New Year's greeting.

As the New Year progresses, the rituals continue. The third day of the New Year (Sunday) is considered a time of bad luck, so many people stay home. For certain animals however, it is believed to be a good day -- especially for field mice, who hold their weddings on that day. Some people scatter rice in the field for the affair.

On the fourth day, the gods, who have been on vacation in the other world for the New Year, return to earth. They are welcomed back with firecrackers and offerings of spirit money. The welcome ceremonies often take place at the end of the day, since no one wants to offend a god who might be getting back a little late.

On the sixth day, spectacular lion and dragon dances begin. The seventh day is the anniversary of the creation of mankind and is marked by a seven-dish dinner and the lighting of seven candles. Of all the gatherings and festivals involved in the cycle of the lunar year, none is as dramatic or as ancient as the celebration of the Chinese New Year.