Who could resist a place where chickens sing, avocados think and real estate agents are extraterrestrials? 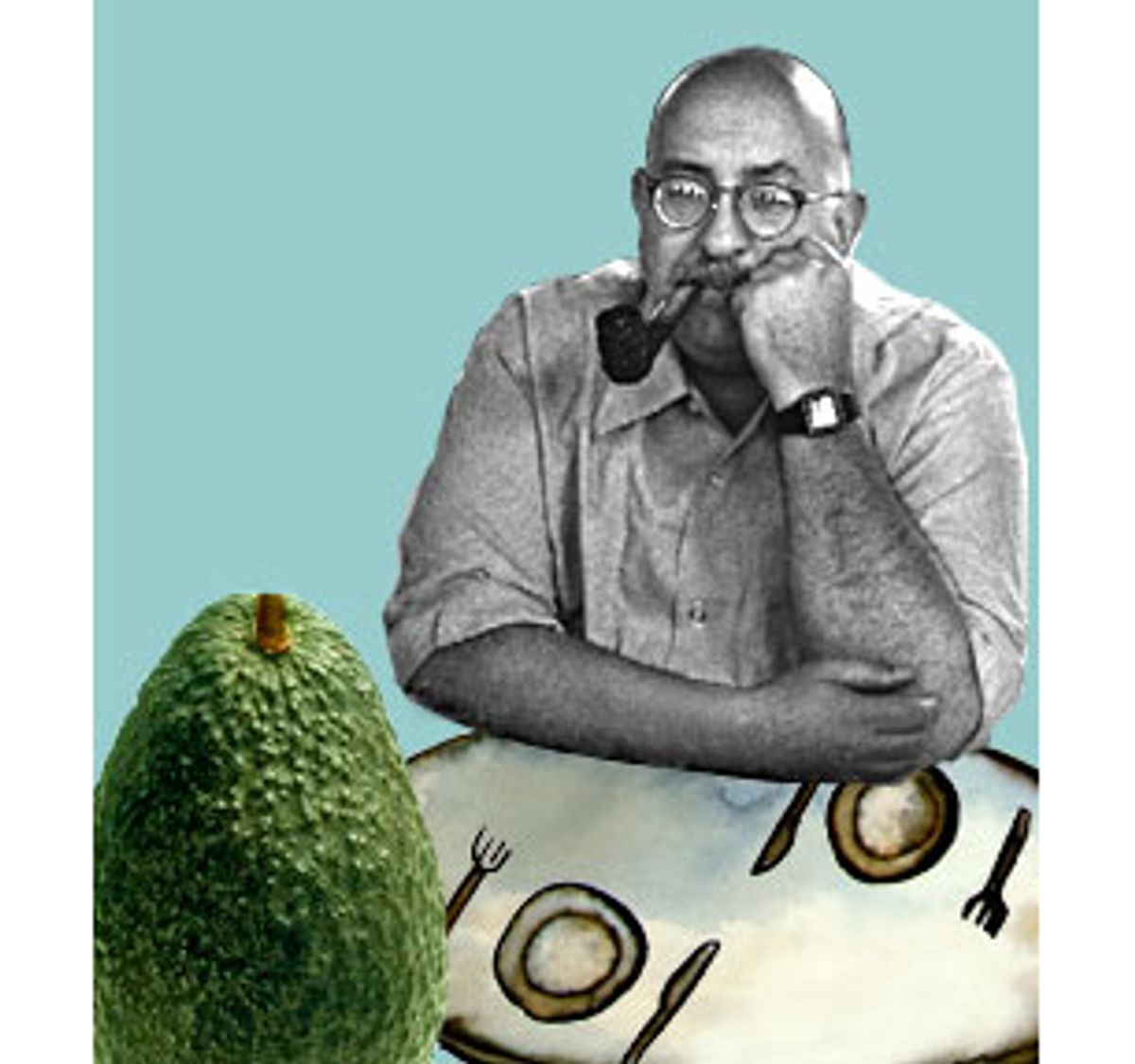 A woman in her 20s asks Daniel Pinkwater one of life's great questions: "Daniel," she writes, "what is Gorgonzola?" He explains: "If cheese were a religion, then Gorgonzola would be God. Or at least Jesus. And that," he adds, "is a religion I'd subscribe to." Another reader wants to know how to keep her boyfriend's cat from sitting on her head. "Motor oil," he suggests. "Works every time."

Welcome to Planet Pinkwater, where real estate agents are extraterrestrials, chickens sing and avocados are capable of simulating intelligent thought. In this world, Pinkwater, the author of more than 60 books for children, has all the answers -- many of which have practical applications in our world as well.

"I am the guru for those who don't listen," Pinkwater tells me in a telephone interview. He has a voice that makes you want to listen, though: not exactly the gorgonzola of voices, but definitely the cambozola -- smooth, rich, laced with pockets of something sharp, dark and very odd. This voice has served him well in a parallel career as a radio personality. He is a regular commentator on NPR's "All Things Considered." And his Chinwag Theater, which features reviews of current children's fiction and Pinkwater reading from his own work, airs on public radio nationwide.

In person, the egg-shaped Pinkwater is apparently a less convincing presence. He admits that, when he reads in public, children have been known to quiz him about his work to make sure that he is the real Daniel Pinkwater.

"They expect someone with a little more forehead," he says. "Someone who walks upright."

Pinkwater looks less like a novelist than a chef, the rotund author, say, of an award-winning cookbook called "Blue Cheese and You." The resemblance isn't entirely coincidental: Food plays an important role in practically all of Pinkwater's books, as it does in his life. When I reach him on the phone, he asks that I call him back in "the special room" of his upstate New York house: the kitchen. Our conversation gets started with a description of the apple bundt cake which he will eat later in the evening. ("Good thing this is a phone interview, or you would have had to share," I remark. His response: "Oh, no. I would never do that.")

Like a chef -- a slightly mad chef, perhaps -- Pinkwater's genius lies in the combination of unlikely ingredients. "Alan Mendelsohn, the Boy from Mars" begins as the story of a boy who doesn't like his new junior high school and skips rapidly through the worlds of psychiatry, used-book stores, mind control and the Japanese language to end up on a plane of existence called Waka-Waka, where the natives have lost control of the sacred plant from which they make a drink not entirely unlike hot chocolate.

"Slaves of Spiegel" tells the story of a pan-galactic contest to make the single most disgusting snack imaginable. Mankind's entry, "one Venusian cranshaw melon, a whole ham, three giant radishes (weighing at least 6 pounds) from Glintnil, five Bartlett pears, a kosher salami, one quart of Vermont maple syrup, two pounds of raw oats, and a Spanish olive," is only the runner-up.

How did Pinkwater become the chef of the absurd? He claims that his first ambition was to be a sculptor: "I wanted to make large and amazing things out of heavy materials," he says, and he spent four years at Bard College trying to do just that. He won't describe the result of his labor, but notes that there was "a remarkable unanimity of response" to the work.

"It was like when you're in a social situation and someone does something incredibly embarrassing. Your eyes close down. You just pretend not to see it."

When his sculpture teacher asked nervously, "You're going to be a writer, aren't you?" Pinkwater gave up the plastic arts and, after a brief stint as an illustrator, began writing children's books.

Twenty years later, Pinkwater still denies that his writing has had any success. "I have tried 80 times to write a commercial novel, and I've failed 80 times," he says.

If you believe that, you're probably the sort of person who would douse your boyfriend's cat with motor oil. His work has shaped a generation -- two generations, really, or three -- of readers. Beginning with "Lizard Music" (1976) and "Alan Mendelsohn" (1979), on through "The Snarkout Boys and the Avocado of Death" (1982), "The Snarkout Boys and the Baconburg Horror" (1984) and "Borgel" (1990), to "The Education of Robert Nifkin" and the omnibus "5 Novels" (both in 1998), Pinkwater has acquired a cult following among current and former children.

Another four-novel collection (including "Yobgorgle," "The Worms of Kukulima," "Borgel" and "The Snarkout Boys and the Baconburg Horror") is due to be published this spring by Simon & Schuster, along with a new series of chapter books, which will come out in April. The first is entitled "The Magic Pretzel."

"Daniel," one reader writes on The (sort of) Official Pinkwater Web Site, "You are the best author ever." Another boasts, "I have read half of your books," an impressive feat when you consider that many of the books are out of print, some practically impossible to find. In true guru fashion, Pinkwater replies only, "Why haven't you read the other half?"

Pinkwater's writing reminds you how easy it is to sneak out of the ordinary world. All you need to do is take the bus to a different neighborhood, catch a midnight movie, walk to the end of an unfamiliar street and you're somewhere else: Tintown, Mars, the Waka-Waka plane of existence. What you find there is unexpectedly beautiful.

In "The Snarkout Boys and the Avocado of Death," there's a description of Beanbender's, a beer hall tucked away in the slums of Baconburg:

Beanbender's was made up of a number of dead trucks and a couple of railroad cars arranged in a circle, like covered wagons in the movies, made into a circle for protection against the Indians. All the dead trucks and railroad cars were covered with wooden shingles and banked with earth and gravel above the wheels. A number of kerosene lanterns were fastened to the outside of the circle. There was a door, with a lantern on either side, lighting up a sign painted on a board. BEANBENDER'S, it said.

This is Fellini in Wonderland, a magical world made of junk, a permanent carnival hiding in the underbelly of your hometown.

His writing is, in fact, so good that you sometimes wonder why children are the only ones who are supposed to like it. Pinkwater makes no bones about the fact that he writes for children -- he likes it that way. Grown-ups, he says, read mostly in order to go to sleep (which, he notes in passing, may explain much of contemporary American fiction). Children, on the other hand, haven't acquired the "habit of reading"; they pick up a book because they're interested in what you're saying, and if they aren't interested, they put the book down.

Pinkwater likens writing to stage magic: Kids don't go for sleight-of-hand because they aren't distracted by the magician's patter. To enchant them you need boxes with hollow walls, hidden pockets, mechanisms they don't understand. Children are demanding, irreverent and hard to fool.

This is an optimistic view of childhood, and it's one worth taking seriously. Pinkwater is talking back to Ritalin. If children have short attention spans, he implies, it's because nothing offered to them is interesting enough to hold their attention for long. Pinkwater's books are ample proof that, given the right materials, kids are capable of the kind of attentiveness we associate with, say, Proust scholars or 11th-century monks.

Witness the fan who tracked down 30 Pinkwater novels, or the author of the Hoboken Emergencyclopedia, a glossary of everything in the Pinkwater universe, from the Abominable Snowman ("a large hippie with big feet") to Zuzuki ("pushing one's opponent on the chest with one's head"). The entry for "pickle" traces the significance of said condiment in kosher, dill and sliced forms through seven novels, all cross-referenced. If anything, Pinkwater's fans may be a little too dedicated; the school psychologist would probably diagnose them with attention surplus disorder.

The readers who build Web-based glossaries are exceptional, but they're by no means the only fans. When Pinkwater started out as a children's author, he assumed that his audience would be mostly kids like himself: bookish, slightly maladjusted, with a 10-dollar vocabulary and a taste for the bizarre. The sort of children, in other words, who grow up to be writers, or monks, or (God forbid!) Proust scholars.

To his amazement, Pinkwater gets fan letters from the normal children, too: the cheerleaders, the class presidents, the captains of the soccer team. "Maybe I'm a better writer than I thought," he speculates. Could it be, I ask, that people are also stranger than he anticipated? He agrees: "Everyone is freakier than I thought."

Indeed. Why else would a reader in her 20s write to Pinkwater about the meaning of cheese? The truth is that his appeal cuts across a number of boundaries: normal vs. weird, old vs. young. Pinkwater's writing is absurd, but so is the world -- witness Emergency Librarian Magazine, Jesse Ventura or just about anything on the Web. Where there's room to accept absurdity, there's room for wonder. Reading Pinkwater, you can sit back and think about how strange everything is and, occasionally, how beautiful.

There are, of course, those who would argue that it's unhealthy to read a children's author past the age of, say, 24. Big people are supposed to reserve their enthusiasm for real estate, business plans and zero-sum games played by linguistically-impoverished men with hairy knuckles. This, in my view, is real nonsense. A world in which it's uncool for grownups to care passionately about books -- children's books, any books -- would be infinitely scarier than a world with telepathic avocados or real estate agents from outer space.

Therefore, read Pinkwater. Read him to your children. Read him in secret when your children aren't around. With a veritable cavalcade of Pinkwater books due in the spring, you have no excuse to do otherwise, unless you're an avocado or, I suppose, a real estate agent.