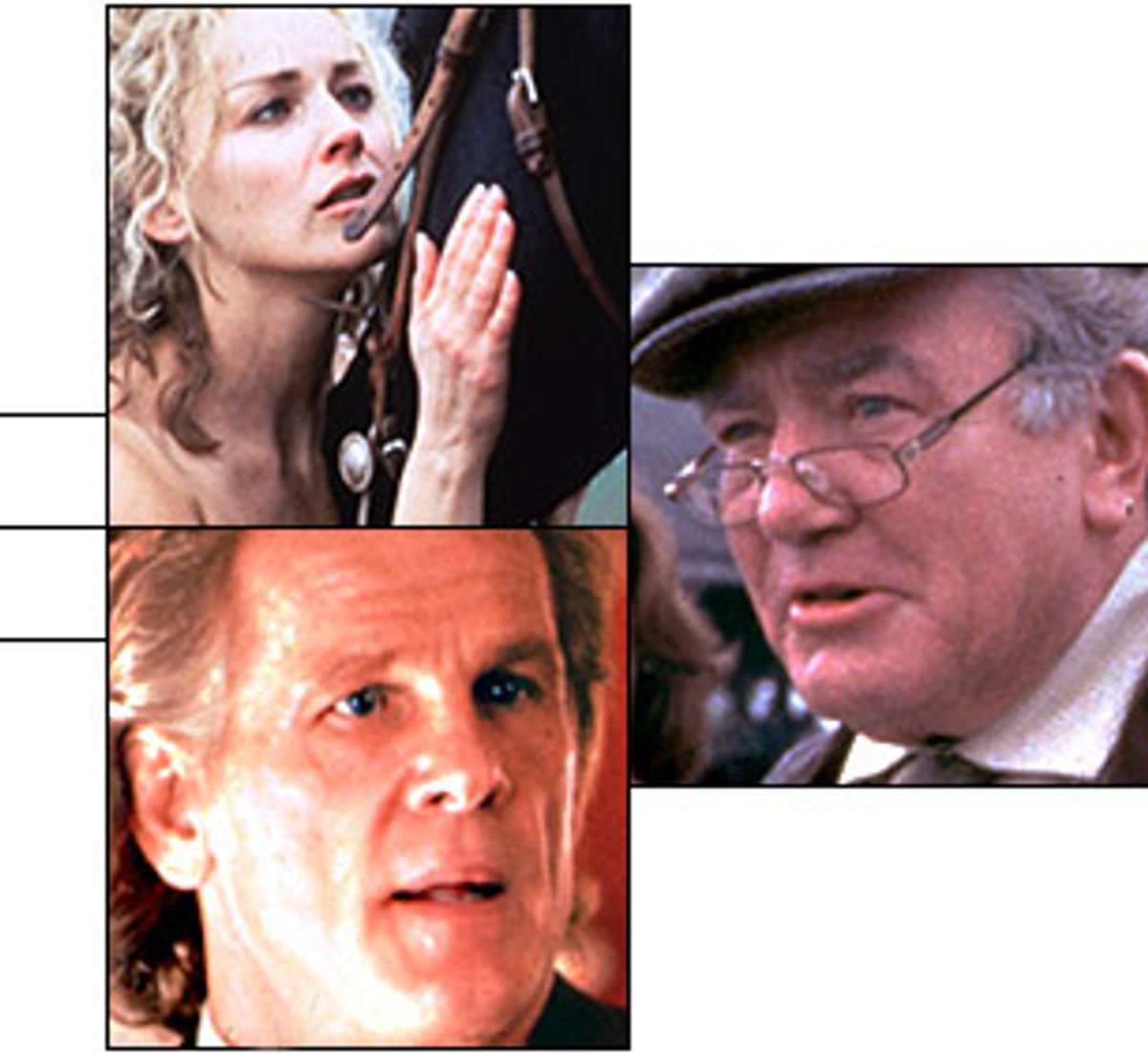 Nick Nolte looks as if he were born falling apart. Handsome enough and rugged enough to be a traditional Hollywood leading man (as he was, brilliantly, in "The Prince of Tides"), Nolte has gone places leading men rarely have. In 1998's "Affliction" he turned the strong, silent type inside out. Watching Nolte in that movie you could feel all the frustrations and emotions men aren't supposed to express knotting themselves up into tangles of inarticulate rage, and you knew that he wasn't going to survive the coming explosion. But Nolte has been at his freest when he allowed his shaggy physicality to take over, as it did in his performances as the homeless put-on artist in "Down and Out in Beverly Hills" or the Jackson Pollock-like figure in Martin Scorsese's "Life Lessons" segment in "New York Stories."

When Nolte shambles across a freeway overpass in the new "Simpatico," swigging from a bottle of Bushmills he has secreted in a dirty overcoat that promises to contain as many surprises as Harpo Marx's ever did, he seems to have found the essence of his man-mountain self. His flyaway, dirty blond locks look like a set of crazy wings that, if they could, would take him to a better place. But that huge, powerful body keeps him trudging forward. And as the performance takes shape, the crags and hollows of Nolte's face look less like the marks of life's hard knocks than the protection nature has devised to soften the blows. When the camera catches Nolte in an unprotected moment and his eyes open wide, betraying every emotion he's kept close to the vest, you understand why most of the time they seem so tiny, hiding out behind that fortress of a face.

In "Simpatico," the impressive debut of director Matthew Warchus (who, along with David Nicholls, adapted Sam Shepard's play), Nolte's Vinnie is the down-and-outer as romantic dreamer. Not in the manner of Bukowsi-style gutter sentimentality, but as if, beneath the booze and the funk and the dirty old clothes, Vinnie were still a teenager. Well into a hard middle age, Vinnie still holds every adolescent promise as sacred, still regards long-ago bonds as if they were a conversation that paused five minutes ago.

The bond here is with his friend Lyle (Jeff Bridges) and Lyle's wife -- and Vinnie's former girlfriend -- Rosie (Sharon Stone). As teenagers, the three worked a scam involving a horse race that won them enough to set themselves up in the racing business. But the scheme was sniffed out by the racing commissioner, Simms (Albert Finney), so the three engineered the public exposure of Simms' shady dealings while privately blackmailing him to ensure they wouldn't be found out.

"Simpatico" begins years later. Lyle, who wound up marrying Rosie, has become one of Kentucky's top racehorse owners and is about to sell his Triple Crown winner, Simpatico, who will be put out to stud. Nothing has worked out for Vinnie. Existing on Lyle's dime, he still lives like a derelict in the seedy little California town where he and Lyle and Rosie worked their scheme, and the memory of it has never ceased to sicken him. Stumbling home from the dive where he does some of his drinking, Vinnie sits with the shades drawn looking at home movies of the crooked victory, torn up over both what he did and what he lost. And the movie opens at the point where he has to do something about it.

The subject of "Simpatico" is how we live -- or don't live -- with corruption. Lyle has accepted the scheme as simply the price of doing business, and he's too caught up in his grand life to care about how it's been poisoned -- even, most of the time, to notice that it has. He's too jazzed at being a racing hotshot to spend much time worrying that Rosie, like Vinnie, has become a drunk, albeit one kept in much more lavish dissolution.

If it seems incredible that we've been watching Jeff Bridges for almost 30 years now, that may be because, at 50, he still has the strapping build and youthful good looks of a high-school football hero. Warchus puts the way Bridges has aged so sensationally, and our image of him as an open, immensely likable actor, to contrary effect.

Lyle is the very picture of thoughtless, smooth-faced corruption, and under his surface affability, you can detect the hardness of steel girders. And Bridges is so adept at underplaying, at immersing himself in a character, that it's easy to think he's not doing anything special. But when you recall how many times this actor with a (deserved) reputation for likability has played characters who are difficult to like (the embittered lounge pianist in "The Fabulous Baker Boys") or even horrifying (the beyond-cold killer in "Jagged Edge"), you realize how he's used his ability to connect with audiences in order to draw us to characters we might otherwise resist. The role of someone whose charm is a ruse is peculiarly suited to him, a reminder of the depths we take for granted because Bridges is, from movie to movie, so dependably good.

"Simpatico" is designed so that as Vinnie reenters Lyle's life, kicking up the dirt of their shared past, the two characters appear to be swapping personas. Lyle sinks into Vinnie's scruffy lifestyle as Vinnie slicks himself up like the success he was meant to be. Nolte and Bridges pull off something far trickier, making the two men succumb to the persona they've each been trying to hide, Vinnie's still-hopeful romantic and Lyle's conniving sleaze. And so, like Ross Macdonald's Lew Archer mysteries, the movie becomes about how past sins and buried allegiances are unearthed to taint the present and, finally, tear it apart.

I haven't read the Shepard play that the movie is based on, but certain Shepardisms stick out. As in "True West," there's the wild force reentering a staid life and sending it askitter. The settings (handsomely shot by John Toll), from shabby California bungalows to the faux-gentility of Kentucky stud farms and Churchill Downs, are much more vivid than the symbolic locales of the playwright's early work.

Warchus and Nicholls have told the story in a tricky flashback structure (always clean and clear, thanks to Pasquale Buba's editing) that juxtaposes Vinnie, Lyle and Rosie against their younger selves played, respectively, by Shawn Hatosy, Liam Waite and Kimberly Williams. Warchus seems as at ease with the complexity of the style as he is with directing actors. The casting of these young actors is felicitous, particularly the talented and sweet-spirited Hatosy (he was the working-class kid in "Outside Providence") who adopts a vocal scratch that approximates Nolte's and whose clear, open face seems a harbinger of Vinnie's older, closed-off countenance. And Kimberly Williams shakes off the icky-sweetness of her role in the "Father of the Bride" movies with a vengeance. She confounds the clichid conception of Rosie as the vulnerable tough cookie by embracing the contradiction, making Rosie's coldest, meanest act the one guaranteed to bring her the most pain.

In fact, Williams transcends the hackneyed conception in a way that Sharon Stone -- working her tail off as she always does -- can't in the later, badly written scenes as the older Rosie. When Stone gets a chance, in her final scene, to escape the wasted glamour-queen bit the part turns into, she hooks into something that's both mournful and horribly appropriate.

If "Simpatico" sometimes seems messagey, it has also picked a potent central metaphor in horse racing. The power of a horse race is always pitched right on the edge of pathos because the strength and speed of the horses -- all of it in those long, spindly legs -- is so fragile. It's hard not to feel the ugliness of corruption when it touches these beautiful creatures.

"Simpatico" doesn't always transcend the obvious. At its best, Warchus denies his characters neither judgment nor compassion. But there is an inescapable whiff of '60s moralism in the air here that threatens (but never quite manages) to topple the movie into heavy-handedness. At its core, "Simpatico" is about how youthful idealism is inevitably destroyed by corruption. The movie simultaneously wants to cheer on the idealists while showing us that the world is so rotten they can only expect to be destroyed. At times, it feels caught between Vinnie's naoveti and Lyle's cynicism.

Luckily, Albert Finney's sensational performance as Simms blurs that rigid moral line. Simms, who dropped out of sight after his disgrace and has resurfaced under another name as a bloodstock agent, is neither an innocent nor so wholly corrupt that he thinks goodness is the province of fools. Five years ago, as the despised and ridiculed schoolteacher in Mike Figgis' fine, ignored film of Terrence Rattigan's "The Browning Version," Finney gave one of film's least heralded great performances. That kind of role is a test for an actor, and Finney avoided every temptation to turn the character into a lovable codger.

As Simms, a man who falls into temptation, Finney passes another actor's test: He makes us understand and empathize with a man who could easily be nothing more than an incarnation of moral rottenness. Finney plays him as a man who has freely chosen to do rotten things. Simms' sliver of dignity is that he blames no one else for those choices, and that, like Marley's chain, he carries the weight of the consequences in every fiber of his being. "Simpatico" ends with a showy, cynical flourish, a scene between Finney and Catherine Keener (bringing her uniquely flaky timing to the role of a supermarket checkout clerk who's gotten involved with Vinnie) that's a rather trite object lesson on the seductiveness of corruption. On the soundtrack we hear Joe South's 1969 hit "Games People Play" (in a version by Petula Clark). Finney's unresolvable presence suggests another South tune would have been more appropriate: "Walk a Mile in My Shoes."