So much for singing nuns

The rise of Joerg Haider forces Austria to face the truth about its history -- and puts the European Union in a bind. 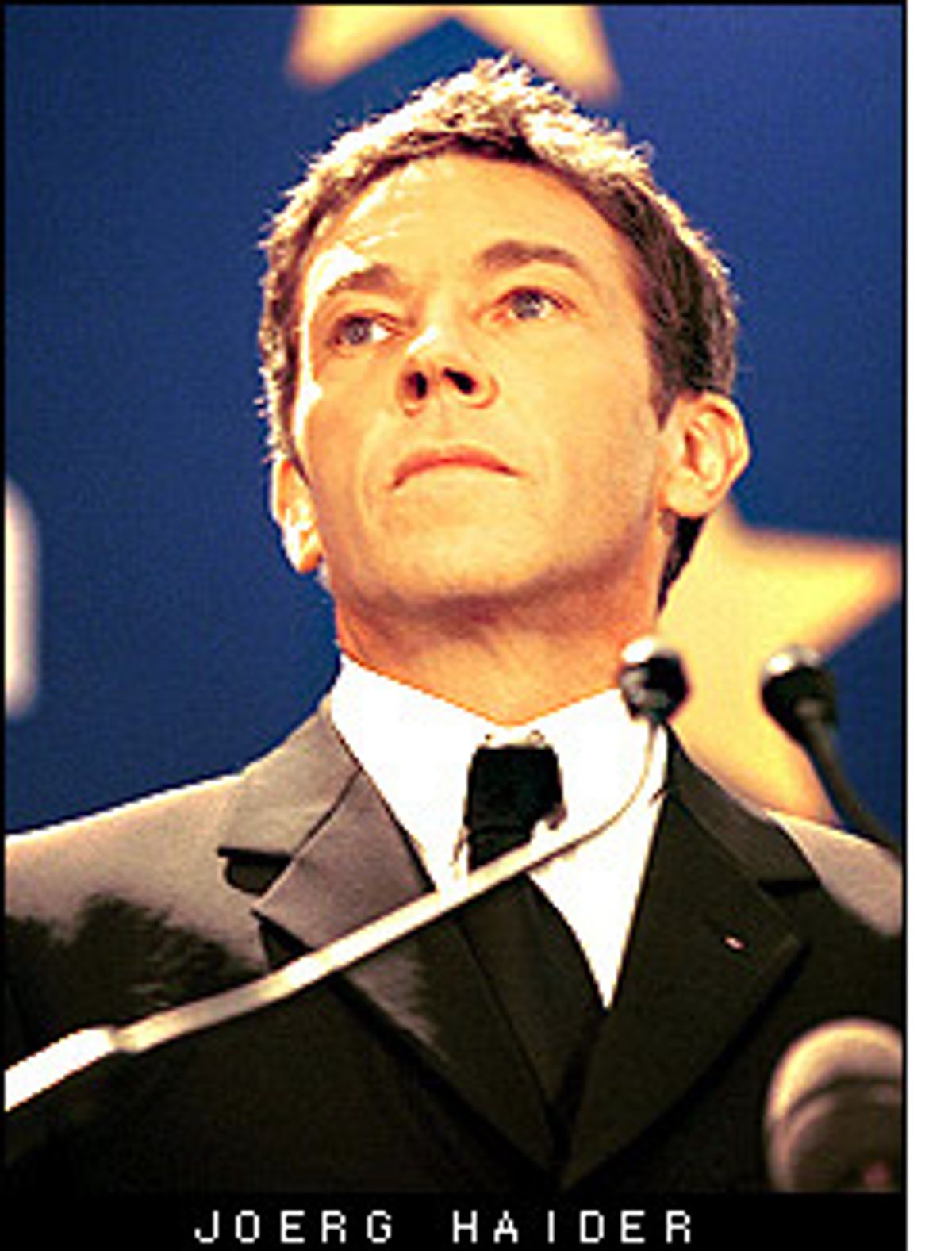 Last week, as hundreds of demonstrators took to the streets of Vienna to protest the entry of Joerg Haider's anti-immigrant Freedom Party into the Austrian government and as European leaders denounced Haider himself for xenophobia and extremism, an odd little statement of outrage appeared on the Freedom Party (FPV) homepage.

"We were informed in September 1999 that a counterfeit of our website existed on the Internet," the statement begins. "We distance ourselves expressly from the altered content and the links on this website. We have no relations whatsoever with these cyberterrorists."

The cyberterrorists in question, as yet unidentified, have played a grim joke. On a site otherwise resembling the FPV address, tucked away under the heading Blue Links, are a few cheerily nationalist German phrases where lists of regional party headquarters should be. Each phrase hides a link. "Crusaders for our time" links to the Ku Klux Klan homepage. "We don't understand the language, but the symbols are right" connects to France's National Front, the right-wing party of Jean Marie Le Pen. And "Songs from the Homeland," the most incendiary link of all, contains banned hate groups and their songs -- everything from "Fuehrer, Fuehrer" by Romper Stomper and "Into the Oven" by Macht und Ehre (Power and Honor) to "Six Million Lies" by No Remorse and "Coon Shootin' Boogie" by Aryan.

The butt of the joke may be Haider and his party. But the punch line touches on Europe's deepest fears. The European Union members have reacted vehemently to the rise of the Freedom Party, imposing diplomatic isolation on Austria and, in the case of Belgium, hinting at expulsion. Having rebuilt themselves upon the ruins of two world wars, having survived a bloody century, the states of the EU have gone to great lengths to assure the rest of the world -- and themselves -- that the next century will be different.

In 1999, they adopted a single currency. Border controls have all but vanished (it is now possible to drive from Calais in northern France to Bari at the southern tip of Italy without a customs check). In November, several of the countries will begin to formalize a new military alliance. Slowly but surely, inch by bureaucratic inch, EU countries have been working toward a comfortable peace with one another, toward a trade-based harmony of languages, currencies, flags and cuisines.

Now, just as the road ahead seems clear, as the Balkan wars wind down, and even Turkey and Greece look ready to settle long-standing disputes, they find themselves confronted by Haider's party, and everything that it represents -- everything that the counterfeited links grotesquely imply -- in the government of one of its own member states.

Austrians have not been thrilled by the EU's reaction. Many have expressed shock at the threat of diplomatic isolation. After all, Haider's party did not stage a military coup. It won seats in a legitimate election and stands to win even more if this new coalition falls apart and new elections must be held.

Some EU countries, Italy in particular, seem uncomfortable with the overweening tone of the response. In 1994, a neo-fascist party, the National Alliance, joined the government in Rome. Despite a lot of hand-wringing, nothing much happened, and like so many Italian parties, the National Alliance vanished as quickly as it had come.

The EU has not backed down so far, but its bark will be worse than its bite. Already, economic sanctions have been ruled out, if they were ever seriously considered.

In a sense, the message of the member states is not for Haider and the Austrians. It aims to cow far-right parties in their own countries, and to discourage coalitions with them. In France, where the National Front remains a force, this is a concern. And in Germany, where the mainstream conservative party faces the worst scandal in its history, politicians fear the possibility that large numbers of right-leaning voters will defect to the handful of extremist parties. To make themselves clear on this point, the Social Democratic governments that make up the bulk of the EU are more than willing to wax anti-democratic.

Haider, who recently turned 50, is a whisper of the past. His parents were committed National Socialists. He has praised the employment policies of the Third Reich and sympathetically addressed groups of aging SS veterans. His last name begins with H and has six letters. And the final blow, a taunt from ghosts: He's an Austrian, as was Adolf Hitler. "Europe is no longer in the 1930s," France's foreign minister Hubert Vedrine said on French radio last week, as if to remind himself that it was so.

Austria had a catastrophic 20th century. It began as the 600-year-old, multi-ethnic Hapsburg Empire, run by a decrepit Kaiser and covering a territory that included most of what we now call Eastern Europe. One hundred years later, it ended up a prosperous but insignificant modern republic smaller than Maine and populated largely by Catholic German speakers. The metamorphosis explains some of the country's current woes. To this day, Austrians haven't quite let go of their Hapsburg pretensions, a superiority complex steeped in parochialism.

Other parts of the past haven't been as readily embraced: Hitler, for instance. The future leader of the Third Reich was born in the crown lands and spent his formative years as an aspiring artist in Linz and Vienna, watching the erosion of Germanic culture and political authority by the empire's bric-a-brac of ethnic populations, by its Slavs, Jews and Gypsies.

In 1938, Germany annexed Austria and Viennese crowds cheered Hitler's arrival. But after World War II, Austrians painted the happy union as a hostile invasion. Hitler (the Austrian par excellence) and his cronies became de facto Germans. Austrians became their victims, the civilized, deeply horrified heirs of Beethoven (who was in fact German) attacked by ugly Teutons.

Pop culture lent a hand to cleaning up Austria's image in the 1960s. The Broadway musical "The Sound of Music" transformed Austria into a land of musically gifted, politically persecuted children, nuns and admirals. In a coup de grbce, at the end of the 1965 movie version, a crowd of Austrians sings the country's national anthem under the hostile glare of a Nazi official outraged by this show of national defiance.

In 1986, the truth about Austria's past began to emerge. The country's president, a former chief of the United Nations, Kurt Waldheim, had served with the SS, and he was castigated for this record internationally. The United States banned him from entering the country.

Under siege, the country made efforts to correct the record. "There has been some movement," Edward Serotta, a well-respected chronicler of Jewish life in East Central Europe and a Vienna resident, told me. "Not enough, but there is some." School textbooks now include the Holocaust, and, as in Germany, documentaries on the subject run frequently on national television. Austrian chancellors have visited Israel and admitted their country's guilt; a Holocaust memorial is under construction.

But the past as an explanation for Haider only goes so far. His rise to power is more easily explained by popular discontent with the country's ruling class than it is by an appeal to right-wing extremism. Ever since the end of World War II, Austria has been a fiefdom of two parties: the Social Democrats and the Christian Social Party. For most of the Cold War, when the country was officially neutral, the system worked well. Tourism boomed; the country's inhabitants had one of the best-financed welfare states in Europe. Flush with cash, the two parties usually forged a coalition, dividing the spoils of government between them.

A recession in the 1980s tarnished their records and opened the way to Haider's small third party, the FPV, which typically garnered about 7 percent of the vote with its attacks on immigrants and the money that they cost the average Austrian in social security and crime prevention. "Vienna must not become Chicago," ran one of their more famous slogans.

In October, after years of rising fortunes, the party won 27 percent of the vote and placed second in national elections. At first, the two old ruling parties attempted to form the usual coalition, but in January talks broke down, and Austria, for better or worse, has entered a new phase of its history.

So has Europe. Whether or not Haider turns out to be as dangerous as his countryman -- a distinct improbability -- he does present a real challenge to the values of tolerance and free trade that the European Union has cultivated over the last half century. Haider doesn't have to be Hitler to cause trouble.

The EU may have overreacted; it may have shown more nervousness than was strictly necessary. On the other hand, the counterfeit links on the FPV site may be more of a warning than a joke. If so, the warning has been heeded.

John Marks is the author of the memoir "Reasons To Believe: One Man's Journey Among the Evangelicals and The Faith He Left Behind." His latest novel, "Fangland," a story of vampires in the news business, is one of this nominees for the World Fantasy Award in fiction. He blogs at www.purplestateofmind.com.