No one has studied casual smokers, but their risk level might be lower than expected. 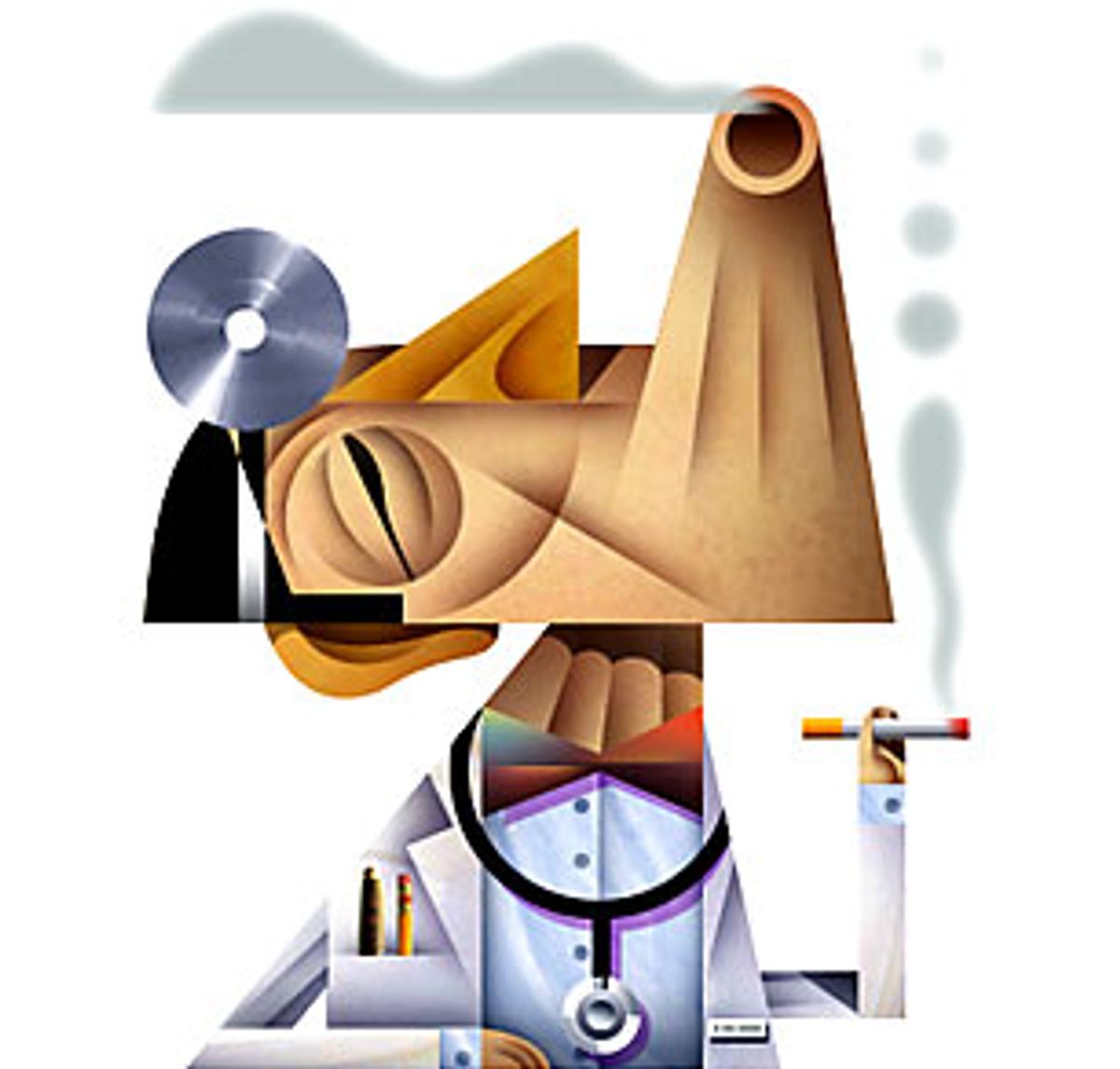 Nodding intently as her friend Rob tries to explain some new wrinkle in his love life over the din of the bar's blaring frat-rock soundtrack, Jen takes a drag from her freshly bummed cigarette. If custom holds, she'll probably mooch one or two more from Rob's dwindling supply before night's end. Jen likes to smoke. The nicotine gives her a subtle buzz and, banal as it may be, the act itself -- holding the cigarette casually between two fingers, taking languorous drags and exhaling plumes of purplish smoke into the bar's hazy troposphere -- is strangely comforting.

Since it's Saturday, Jen probably won't smoke tomorrow. Indeed, barring a midweek excursion to a local watering hole, she may not see or even think about another cigarette until Friday, when, likely
as not, she'll be sitting in another smoky bar, puffing away at another donated cigarette.

Jen is not alone.

Of the nearly 70 million Americans who smoke, a good 20 percent
routinely categorize themselves as "less than daily" smokers. If you
happen to be a regular smoker, you know the type. You know because, while the people occupying that 20 percent bracket may be avid cigarette smokers, they are not usually cigarette buyers. Smokers call them leeches, public health officials call them "chippers" and nobody, it seems, has ever gone to the trouble of studying the impact occasional smoking has on their health.

Borrowed from street slang, the term chipper originally was used to describe the rare heroin user who could take the drug recreationally and not develop an addiction. In the realm of tobacco, although chippers, or "puffers," as they are also sometimes called, have always made up a fairly sizable portion of the smoking population -- little if anything is known about them.

"I don't think we have a full understanding of what that [group] is -- how they define themselves or think of themselves," says Donald Shopland, coordinator of the Smoking and Tobacco Control Program at the National Cancer Institute. "Most of the epidemiological studies that look at disease risk almost never look at those types of people."

"Almost never" may be something of an understatement. Shopland admits that in more than two decades as a public heath official, he hasn't seen a single study on social smoking. And he would probably know. Before taking his post at NCI, Shopland was the longtime editor of the world-renowned surgeon general's report on smoking.

While epidemiologists reason that chippers must lie somewhere between daily smokers and nonsmokers in terms of relative disease risk, they can only speculate as to where along that continuum "casual" smokers fall. Some scientists even suggest that the risks to chippers may be roughly equivalent to those faced by people exposed to "environmental" or second-hand tobacco smoke.

"We know that the risk [to chippers] is not zero," Shopland says. But since chippers "don't contribute that much of a burden to the public health -- this is a group that we have a very, very poor understanding of."

Beyond not knowing what kind of health risks face chippers, public
health officials don't even really know what their smoking habits look like, Shopland says. Because the studies that routinely confirm the existence of chippers rely almost exclusively on self-reported data and rarely include targeted questions about individual smoking patterns, there is no way to tell when and how often self-defined "less than daily smokers" smoke, he says.

"It could be that some of those people smoke a pack today and none
tomorrow," Shopland says. And the questions aren't likely to be cleared up any time soon, Shopland adds. Why not? "Because you would have so few deaths" in a study of social smokers. Researchers would have to follow a huge sample over many years in order to generate any kind of valuable data, he says.

Despite the obvious conclusion that observation suggests, public health authorities bristle at the suggestion that there may be such a thing as "responsible" smoking.

The fact that the risk to chippers hasn't been measured adequately -- or at all -- should not be taken to mean that the risk doesn't exist, says Peter Kaufmann, leader of the behavioral medicine research group at the National Heart Lung and Blood Institute. Trying to identify what is a safe level of smoking "is simply not the right logic to pursue," he contends. "Fundamentally there is no bottom threshold at which smoking is safe."

Beverly Kingsley, an epidemiologist for the Centers for Disease Control and Prevention's Office of Smoking and Health -- the government's shock corps in the ongoing war against tobacco -- agrees. "There is no safe level of smoking," she says.

But for Rasheed, a 31-year-old physician, avid jogger and longtime chipper, rhetoric about no safe levels doesn't hold much water. "I think my risk for [developing] a smoking-related illness is very low," Rasheed says. "In moderation I don't consider [smoking] much of a health problem."

Rasheed, a Virginia anesthesiologist who asked that his last name not be used in this story, has smoked socially for years, sometimes going without a cigarette for weeks before smoking two or three nights in a row when friends are in town. He says he has never been addicted to nicotine, and indeed has stopped outright a handful of times -- one time to train for a marathon.

Rasheed, who does not drink, sees a bit of a contradiction in his
colleagues' prejudices against smoking. "Drinking is still very much
accepted by a lot of physicians. In medical school, a lot of my friends drank and not a lot of them smoked," he says

"I think there can be social smoking" just as there is social drinking,
he says.

Like millions of chippers, Rasheed would appear to be one of those lucky individuals who isn't genetically inclined toward substance addiction. He smokes to relieve stress, to pass the time and sometimes just to have something to do with his mouth, but never, he says, because he feels he needs it, and never in great enough quantities to put him at any real risk for the litany of health problems that fell pack-a-day smokers by the busload.

About those health problems there is little debate -- unless you happen to be a Big Tobacco CEO testifying before Congress.

As shaky as they are on the topic of social smoking, each of the three public health experts interviewed for this story brightened noticeably when asked to enumerate the health risks facing daily smokers.

A pack-a-day smoker is 10 to 15 times more likely to get lung cancer than a nonsmoker, according to the most current research, Shopland says. And while the increase in risk for lung cancer is slightly higher than for other smoking-related illnesses, epidemiologists have measured similar spikes in the risks of coronary heart failure, emphysema and stroke for daily smokers.

"You see the same dose response in all of the major cigarette-related diseases," Shopland says.

Therein may lie a partial answer to the question of social smoking.
While it appears no studies have examined the health risks facing social smokers, epidemiologists have assembled a sizable body of evidence about the risks facing so-called "passive" smokers -- nonsmokers who face daily exposure, typically either at work or at home, to secondhand smoke.

While a passive smoker may still breathe more tobacco smoke than the average chipper, passive smoking represents by far the lowest level of nicotine intake that has been seriously studied by tobacco researchers.

A chipper may be "analogous to somebody who is exposed to nothing more than environmental tobacco smoke," Kaufmann speculates. And passive smokers, researchers have found, are 20 to 50 percent more likely to develop lung cancer than true nonsmokers and roughly 30 percent more likely to develop coronary heart disease. While that is a measurable increase in risk, it is very small when compared to the risk levels associated with daily smoking. If a pack-a-day smoker is 10 to 15 times more likely to get lung cancer than a nonsmoker, then a passive smoker is, at most, half again more likely than a nonsmoker to develop the disease.

And that doesn't take into account the fact that many chippers probably take in far less cigarette smoke than do the passive smokers studied by epidemiologists. In the studies of secondhand smoke risks, the subjects have had very regular exposure to smoke, Shopland says. Many of those subjects either had spouses who smoked habitually or worked in bars or other businesses where smoking was pervasive.

Taken in that perspective, the assertion of many chippers that their risk of disease is at best minimal seems difficult to refute, prompting again the question of whether there is, as Rasheed and many of his ilk contend, such a thing as "responsible smoking" akin to the widely accepted concept of "responsible drinking."

Paul Brunetta, a lung doctor and former chipper who leads a smoking cessation program at the University of California at San Francisco's Mount Zion Cancer Center, says the problem with the concept of responsible smoking is that tobacco as an addictive
agent is more akin to cocaine and heroin than it is to alcohol. Many
self-defined chippers are really simply in the early stages of
developing a nicotine addiction, he contends.

Brunetta, who started smoking occasional cigarettes as a teenager, was a chipper for several years. "It really helped me to relieve
stress," he says. It was during his pre-med studies that his hobby graduated to a full-blown addiction, he says.

Once he was hooked it took him more than two years to fully shake the habit. Brunetta often tells his smoking groups about his failed attempts to quit, describing how -- more than once -- he rooted through the garbage for packs of cigarettes he had discarded hours earlier. The addicts in his group almost invariably have similar stories to tell, Brunetta says.

Kingsley, the CDC epidemiologist, agrees. While some individuals do appear to be highly resistant to addiction, "You don't have a way of knowing before you pick up that first cigarette if you are going to become addicted to nicotine," she says. "It is such an incredibly physiologically potent substance that [addicts] can't put it down."

"Alcohol is nowhere near as addictive a substance as tobacco," she adds.

And Kingsley remains unconvinced that the risks facing less-than-daily smokers are really all that low. The lack of available information about social smokers is unacceptable, she says. "This is a significant amount of people in the United States and they need to be studied," she says.

But for the reasons already enumerated, the chances that such a study will actually be ventured are slim, Shopland says. "We are never going to have enough money to study everything and to spend a lot of money to try to get an answer to what 4 to 5 percent of the population is doing would be hard to justify" given the budgetary constraints on most public health agencies, he says.

But for chippers like Jen, who, like Rasheed, asked not to be identified by her last name, nebulous pronouncements about potential dangers probably won't be enough to deter their occasional habits.

"I figure eventually I probably won't socially smoke if I have kids or something," Jen says, acknowledging that it probably isn't the
healthiest hobby in the world. But since she doesn't feel the pull of
addiction and her intake is so low, Jen feels no urgency about ending her flirtation with nicotine. "I don't have to smoke," she says. "I don't think of myself as a person who has to contemplate quitting, so I don't really think about it at all."