Nights of the living dead

"Homicide: The Movie" brings the canceled, classic cop show back for a final bow; "Mary and Rhoda": Do not resuscitate. 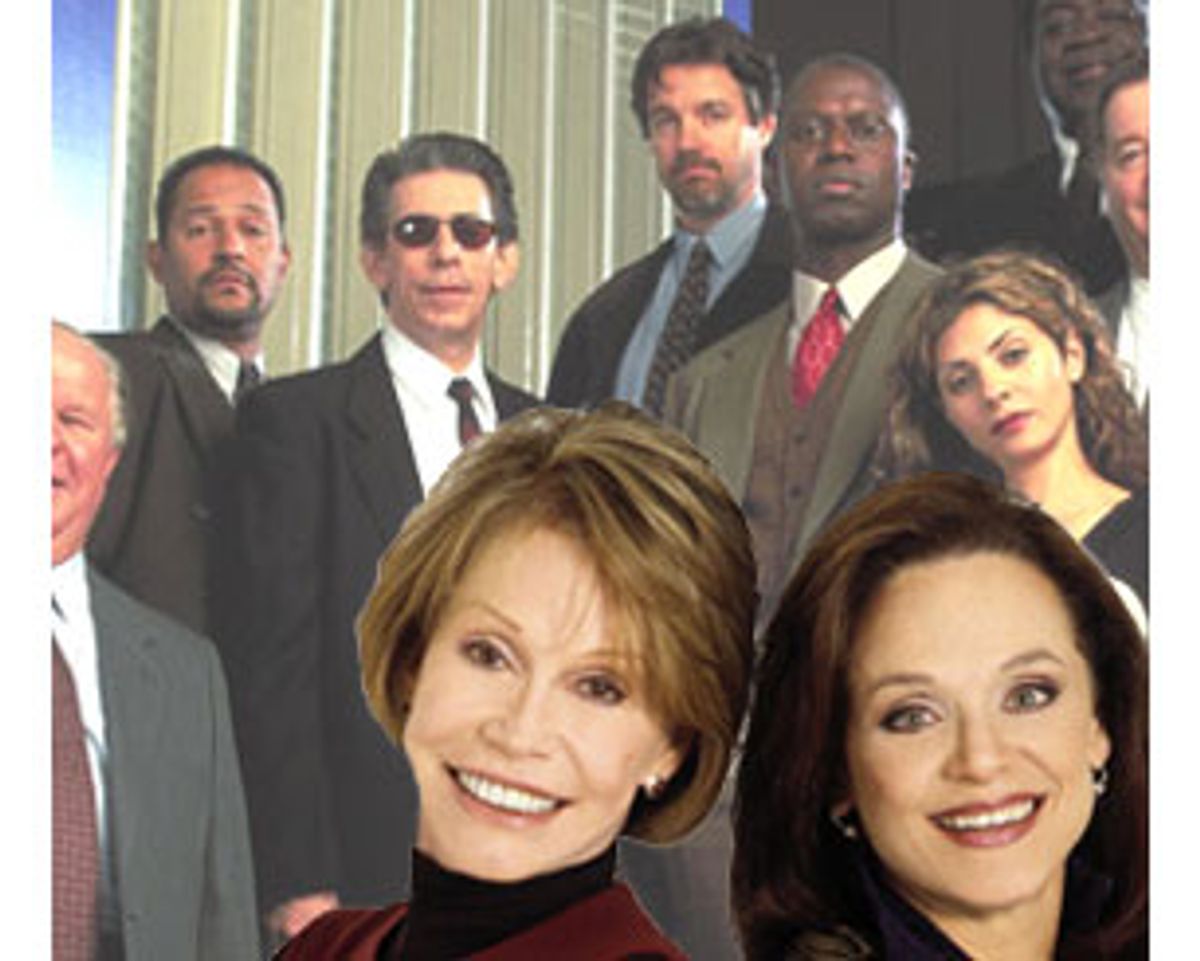 In a December column about the trippiness of watching long-dead actors and once-popular TV characters cavorting eternally in reruns on TV Land and the Game Show Channel, the San Francisco Chronicle's Jon Carroll wrote (only a little bit facetiously), "You know the last scene in 'Titanic,' where the door opens on the ghostly underwater ship and all the passengers are there again to greet you, to smile and nod and say, yes, we still live, welcome home, welcome to the changeless world of memory?"

I know what he means. And you will too, when you watch "Homicide: The Movie," which airs Feb. 13 on NBC, and "Mary and Rhoda" (no last names necessary), running Monday on ABC. "The Mary Tyler Moore Show" closed up shop almost 23 years ago and "Homicide: Life on the Street" was canceled by NBC in May. But the characters of both series have apparently been very busy carrying on their pretend lives somewhere in the ether, out of our view, all this time. And now they're back in our living rooms with tales of near-death miracles and being called to the light by Joe Friday and Lucy and Granny Clampett.

OK, I made that part up. But this practice of bringing defunct shows back for "closure" (always, conveniently, during sweeps period) gives me the creeps. I mean, you've got the reruns, what more can you ask for? When a successful, long-running series flatlines, let it go with dignity, I say. Or else you'll end up with something freakish and unnatural. Something like "Mary and Rhoda."

"Mary Tyler Moore," which ran on CBS from 1970 to 1977, was one of the least preachy sitcoms in history, which was remarkable because it dealt with some of the most serious themes in sitcom history, including female independence, sexism in the workplace, divorce, alcoholism, racism, infidelity, the social stigma of "spinsterhood" and, of course, death itself. (Chuckles, we hardly knew ye.)

This was a sophisticated comedy for sophisticated adults, but watching it in rerun now, it's amazing to see how light and unforced it is, how delightfully airy, almost ethereal, the jokes are -- even broadly drawn characters like Ted Baxter and Sue Ann Nivens float their punch lines on wisps of mischief. "Mary Tyler Moore" never hit you over the head with its own importance, never played up or referred to Mary Richards' career-woman role-model status outside the tube. You can't say the same for the thuddingly self-congratulatory "Murphy Brown" (regarded by some as "The Mary Tyler Moore Show" of the '80s) or the jarringly self-aware "Ally McBeal" (aka "The Mary Tyler Moore Show" of the '90s).

But "Mary and Rhoda" is as wrongheaded as it could be. The movie is a plodding, preachy mess of feel-good Oprah-meets-Lifetime platitudes about being strong and wise and following your bliss. Oh, yeah, and Mary and Rhoda are moms now -- they each have one college-age daughter whom they're driving crazy with their overprotectiveness and career coaching. Clearly, the character credited with putting a friendly sitcom face on '70s feminism has been through some heavy changes. Explaining why she quit her post-WJM job as a high-ranking producer at ABC News to raise her daughter, Mary declares, "I'd had it with having it all ... Born-again mother here!" Somewhere, Phyllis Lindstrom is purring, "I told you so."

"Mary and Rhoda" was originally intended to launch a comeback series, but Moore and the producers couldn't agree on a concept. And it shows. The movie has none of the graceful grown-up comedy that distinguished the old series. But it has lots of predictable, hoary generation-gap jokes as Mary and Rhoda try to make it (after all) in New York City.

Mary, who is a congressman's widow, and Rhoda, who has divorced husband No. 2, land reentry-level jobs where they're the oldest people in a sea of callow youth. Mary is a producer on a tabloid TV newscast, trying valiantly to educate her smarmy young boss about journalistic ethics and values; there's a clunky dramatic subplot about her compassionate handling of a news story about a teenage murderer that seems to have wandered in from a "Lou Grant" reunion movie. Former window dresser Rhoda, who's trying to launch a new career as a photographer, finds herself in the humiliating position of gofer for a trendy fashion photographer. (Naturally, on her first day at work, Rhoda tries to force-feed a twig-thin model a muffin.)

Moore never really looks relaxed here, never really recaptures the essence of Mary -- maybe because writer Katie Ford has turned Mary's old "spunk" into a less charming pigheadedness and her klutziness into mere ineptitude. And the scene where Mary expresses scary, purse-lipped displeasure at her daughter Rose's (Joie Lenz) career decision is truly hair-raising; I, for one, don't want to believe that motherhood turned our warm, reasonable Mary into Moore's ice matriarch from "Ordinary People."

Valerie Harper's Rhoda Morgenstern Gerard Rousseau is, however, exactly as she's always been. Swathed in long flowing cover-ups and layers of scarves, Rhoda continues cracking wise as the pre-Monica Lewinsky Jewish single gal with food issues: "After Jean-Pierre left me, I went back to my first love -- but you can only eat for so long." Ba-doom. In the Great Sitcom Beyond, mores, attitudes and priorities may change with the decades, but shtick is forever.

As for "Homicide: The Movie," it plays like a two-hour curtain call, with all the cast members from the show's six-year run returning to give their characters -- even the ones who were killed off years ago -- a final bow. Not that they don't deserve one -- NBC denied the show a proper send-off when it axed the series before a tidy finale could be written.

In the episode that did air in May 1999, Detective Tim Bayliss (Kyle Secor), soul-sick since a vicious serial killer he'd captured had been freed on a technicality, takes a sudden sabbatical and secretly tracks down and executes the guy. Despite a mind-blowing, speed-of-light highlight reel of the series' history that streaked by as Bayliss prepared to take his leave, the episode felt too abrupt and left too many loose ends hanging to stand as the last will and testament of this unforgettably tough-minded and literate cop show.

Written by series stalwarts Tom Fontana, James Yoshimura and Eric Overmyer and directed by Jean de Segonzac, "Homicide: The Movie" (if this one does well, there are rumors of more "Homicide" movies to come) doesn't do a bad job of devising a reason for bringing 20 of the show's characters together. Lt. Al Giardello (Yaphet Kotto), who's the front-runner in the Baltimore mayoral election, has been shot and critically wounded by a would-be assassin at a campaign rally. And, as fans of the show know, any cop who ever worked for the gruff yet beloved "G" would put his life on the line to find the scumbag who shot him.

But, soon after that, the premise gets unwieldy, unbelievable and even faintly ridiculous, as the core characters of the series' peerless first couple of seasons -- Bayliss; Frank Pembleton (Andri Braugher), who's now a lecturer in ethics at a Jesuit college; Stan Bolander (Ned Beatty), who's retired and on the bottle; Detective John Munch (Richard Belzer), who quit the force to become a sex crimes detective in New York (Belzer went to "Law & Order: Special Victims Unit" after "Homicide" was canceled); Sgt. Kay Howard (Melissa Leo), now working the fugitive squad; and Detective Meldrick Lewis (Clark Johnson), who never left the homicide unit -- rush to the station house like aging superheroes pulling on their tights for one last round-up. I'm no expert on police procedure, but I seriously doubt that two retirees, a former employee of the department and a flake on sabbatical would be given the kind of investigative leeway Pembleton, Bolander, Munch and Bayliss get here.

Having said that, I admit that it is pretty great to see the original cast members (many of whom had earlier left the show) falling so easily into sync again; the movie defers to them, giving only token screen time to latter-day cast members like Michael Michele, Callie Thorne and Jon Seda. The meat of the story is divided between the most intriguing of the newbies, Giancarlo Esposito's Mike Giardello, who stands watch at G's bedside trying to convince himself that his inscrutable dad has been proud of him, and Pembleton and Bayliss, who pair up again to work the case as if no time has gone by.

The Pembleton and Bayliss scenes, filled with exquisitely conveyed unfinished emotional business, are a logical -- and inevitable -- climax to their relationship and to the "Homicide" saga itself. In the movie, it becomes clear that Bayliss, with his moral confusion (he never got over his first case, the unsolved murder of a little girl named Adena Watson, because he never got over the desire for revenge it stirred in him), and Pembleton, with his unwavering moral certainty, were put in each other's path for a reason. Their final scene together, when the guilt-riddled Bayliss pleads for Pembleton's forgiveness, is intense and heartbreaking; it's not pretty, but it's right. It's almost ruined, though, a couple of moments later, by the movie's jaw-droppingly derivative and hokey ending. I won't give anything away, except to say, Move over Leonardo DiCaprio, Kate Winslet, Granny Clampett and Joe Friday -- you've got company.