"The Bitch Is Back" 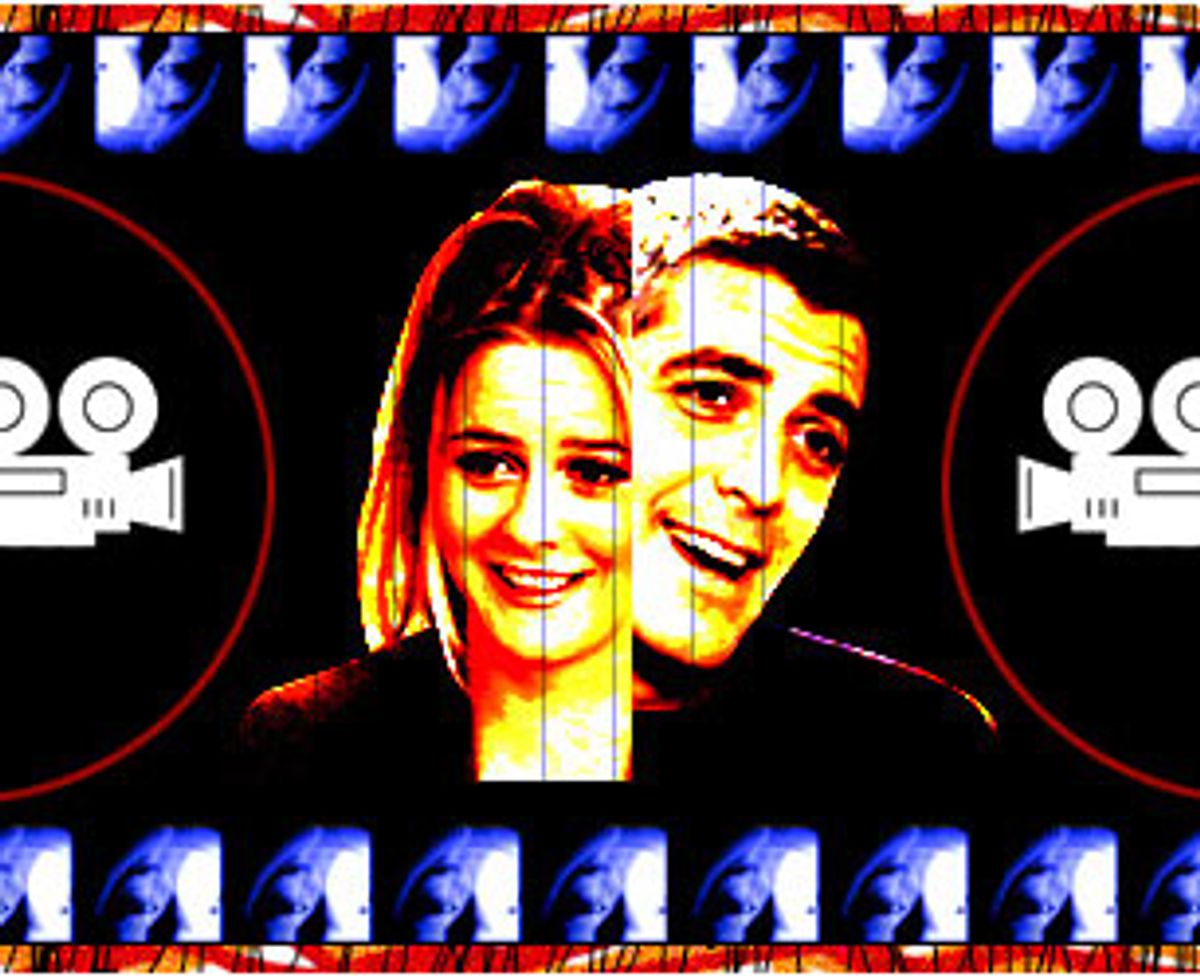 Man, we are stoked to work with you. As you know, Ed and I
made "The Blair
Witch Project" by bouncing checks at a nasty team of Citibank
collection officers. After the movie grossed $100 million last
year, Artisan pitched us a sequel. At first we didn't want to do
it. Corporate sequels still suck, you know. Like we need to
explain this to you after that second "Bill and Ted." Then they
said the magic three syllables: Ke-a-nu. (Or do you say it with
two?)

Needless to say, we've got cash money for "The Bitch Is Back."
Also national forest permits, a $10 million deal with Panasonic,
killer effects, the whole fuckin' pumpkin. The best part? We
didn't have to sell out. To keep it real, we'll be using loads of
video cameras (Panasonic, natch), just like the first time. You,
George, Skeet and the others will not have scripts, just general
improv directions and some character sketches. You'll
improvise the rest. We hope this letter will help you get ready
for the role.

(We probably don't need to remind you that you and your agent
signed NDAs. Letting this stuff slip out would be seriously
uncool. We will be leaking
another set of profiles on the Net four weeks before we debut
at Sundance 2001 in order to prime the pump on the buzz machine,
but that's for the suits to deal with.)

OK, so everybody who saw "The Blair Witch Project: First Curse"
believes that Josh
died out in the woods. Wrong! Actually, he only disappeared.
The next morning Heather and Mike found remnants of his shirt
wrapped around a few bloody chicken livers and some cow teeth.
There were some voices and stuff coming from the woods that
sounded like Josh, but no one saw him die. Frankly, the dude is
too tough to kill! Which is why we thought of you. I mean, after
"Matrix," you're a fucking god!

"The Bitch Is Back" will introduce a new side of Josh. Sure, he
was a laid-back pseudo-hippie-college whatever in "First Curse,"
but now, he's been gruesomely disfigured and set with amnesia.
(Don't worry, K: You'll come out of plastic surgery with only a
tough-looking scar on your left jaw.) At the start of the film --
which takes place a few weeks after the student filmmakers walked
into the woods and before their footage was found a year later --
Josh can't remember his name or his identity, just the witch.
After some intense hospital freakouts, the doctors (Donald
Sutherland and Philip
Seymour Hoffman) threaten to lock him up in a
maximum-security mental hospital. Josh becomes convinced that the
only way to prove he's not crazy -- and uncover his true identity
-- is to find the Blair Witch and bring back proof that she
exists.

Special note: Get training with our rock-climbing guy ASAP, OK,
Ace? When the chicks see you shirtless in the suspension-bridge
rescue? Dude!

We know that you really haven't done a lot since that Batgirl
thing didn't work out, but we totally believe in you. We think
Anne is the kind of integrity role -- Oscar buzz, critics talking
about your courage -- that makes you cover-of-Us-magazine hot. You
know that we considered both Ashley Judd and Sandra Bullock. But
you showed a tremendous amount of hunger at the audition and the
crying was super-convincing.

Anne is a nurse at the Harper's Ferry hospital where Josh is
recovering. While videotaping him for his before-and-after
plastic surgery tape, she recognizes the fear and honesty burning
through the gauze bandages. It's "English Patient" time! One
deep conversation convinces her that Josh is not crazy. She
begins to fall in love. Josh tells Anne that he has to "find that
Bitch." Anne plots and executes a daring hospital escape through
the ventilation system (OK, maybe De Palma used this in "Mission: Impossible," but
it still rocks), captured on security cams for ultra-realism, and
shuttles him away in a hijacked ambulance.

Out in the woods, Anne tells Josh that it really doesn't matter
who he is -- she'll love him no matter what. For a while, it
looks like the Bitch is gonna get them both and they'll die
together young and beautiful. In the final scene, she gets
knocked out and left for dead, but she'll come back to
consciousness in Josh's arms.

Oh, and could you get with our rock-climbing guy and sked some
one-on-one with your personal trainer? Really, we're talking five
pounds. Ten max.

Thanks sooooo much for being cool about the whole Keanu thing.
You know, agents, man, fucking agents. Still, we're psyched that
you're staying on, and we think you can do a lot with the ranger
role before -- well -- you know. (Aggh, aghh. Slice, slice.
Gurgle, gurgle.)

Dude, it's going to be so awesome. Look, you died early in that
huge
long Civil War movie, and we just know the ladies were
all thinking about you afterward and not that wimpy Tobey guy.
What's the deal with him?

Anyway, we decided that the big problem with "First Curse" was
that we had three idiots in the woods who couldn't find their
butts with two hands and a flashlight. Like losing the map even
mattered! So you're the big woods expert -- right now we think
you're a young, studly prof on sabbatical from Chapel Hill or
Duke or whatever. (You can be from Evergreen, in Washington
state, if you want some more realness.) You meet up with the rest
of the crew on their second night in the woods. After their scare
the night before, they think you're the witch. You're knocked out
with a big bundle of sticks. When you come to, you'll tell an old
family campfire story about your great-great-grandfather, the
abolitionist. He claimed that a witch ran off with two of his
children, but the local plantation owners blamed slave voodoo.
Once you're in with the crew, you'll help them get to the house,
and then to the lair. You'll be point man there, and, oh, man,
it's gonna be really bloody.

Special note: Make sure you don't say anything to anyone else,
but you might want to talk to our casting chick, Oni, about the
period piece. We don't really want to get too far ahead of
ourselves, but Haxan Films is in prequel negotiations. Check this
out -- the great-great-grandfather we just talked about? Dude --
who else could it be? Don't worry about the Keanu factor. As far
as we know, he's already signed to star in that Sofia Coppola
"Gravity's Rainbow" thing.

Craig, you're proof that Oni is a genius. Of all her casting
picks, you're the one that just blows us away: You are
Carlton. Remember that thing you did with the leeches at the
audition? Get this: Because that was so brilliant, we're bringing
in a whole tank of them for night three. Like we said last time,
we're concerned about your safety, not with your comfort.

Psych! Just kidding, man. We'll have a trailer and we'll do those
leeches with CGI on the backend.

Here's your story. As a rising star correspondent on "Dateline,"
you made your name as the man who brought spiritualism into prime
time. You staked your credibility on the Rev. Stan Lindsay, who
was eventually convicted of several felonies for ripping off a
factory owner. You're convinced that you nailed the story the
first time around, and left the network instead of backing down.
Now, you're the producer of "Ghostory," a struggling show on the
Sci-Fi Network, and you're looking for the blockbuster that will
get you a deal with Fox.

You hear Josh's claims while working on a story about a real-life
haunted asylum and stow away in the get-away ambulance. Josh and
Anne agree to take you along because your equipment beats their
Hi-8.

Note: We love you just the way you are. Please make sure you
avoid all contact with the natural world until we start filming.
Yes, Craig, that means no spring break in Aspen.

Christ, George -- an uncredited role. We can't even
believe it.

Tom Majors is the Flight for Life pilot who shuttles the
disfigured Josh out of the woods at the opening. This will
establish you as the guy who makes the save. The audience will
just kind of see you and they'll be all like, "Is it him? Is it
him?" You might want to start thinking one-liners now. You'll use
it the first time in this scene, and again when you save the only
remaining video camera.

You'll come back during the raging forest fire scene, and of
course finish up with the Apache for the blow-out at the lair.

Your co-pilot will most likely be Angelina Jolie, or this hot
Victoria's Secret model that we hear is looking for a break.
(She's coming by our office for casting this weekend.) Get
practicing with that trigger finger, if you know what we're
saying.

P.S. Shirtless and ripped when you blast the Bitch? Like Sly in
"Rambo," but edgier -- more Aughts than '80s. Hit the gym.

Stan the Man! OK, the marketing dudes convinced us that the
power-of-suggestion/no-budget crap that we pulled in "First
Curse" ain't going to fly this time. The test group wants a
witch. Dammit, Stan, you're going to give them a witch. We want
the sickest shit you've done since the original Alien. You've
seen the sketches and the Joel-Peter Witkin photographs. Give us
that, plus "The Matrix," plus, I don't know, Hieronymus fucking
Bosch in a K-hole.

We're thinking that the Bitch should be way hairy. As for the
lair, think pods -- she's harvesting children! And what
about an army of those stick figures? They contain the souls --
yada, yada, yada. Maybe it's doofy. We'll talk. We'd like to
continue the handprint theme from the first project -- we've
already got the teaser campaign mock-ups, and we're leaning
toward handprints for the first wave, then stick figures for the
release. Can we tweak them somehow? Hang scraps of flesh off
them? Give them little weenies? (That's a joke.) Just start with
miniatures -- we've got to show them to Mattel and Taco Bell in
60 days.

Right now we're thinking kind of like a techno-drum 'n' bass
collage version of "Rock Me Amadeus." Not necessarily that song
-- the Simpsons did it already. But that attitude.

Fab job so far. Where do we stand with Walken as Pastor Winthrop
or Billy Bob Thornton as the guest on "Ghostory" in the hospital
scene? We'd also like to get Bob Denver for the hunter bit; you
know how much I've always wanted to work with him, and I swear --
Ed doesn't believe me -- that he'll look badass with a huge
Grizzly Adams beard. Also, we're talking with the script
consultants -- the situationists, rather -- on writing
parts for Gena Rowlands and Ben Gazzara. We pull that Cassavetes
shit off and the critics will, like, swallow.