The queen and I

Deep in a New Delhi forest, Doberman pinschers be damned, I begged to see the queen. 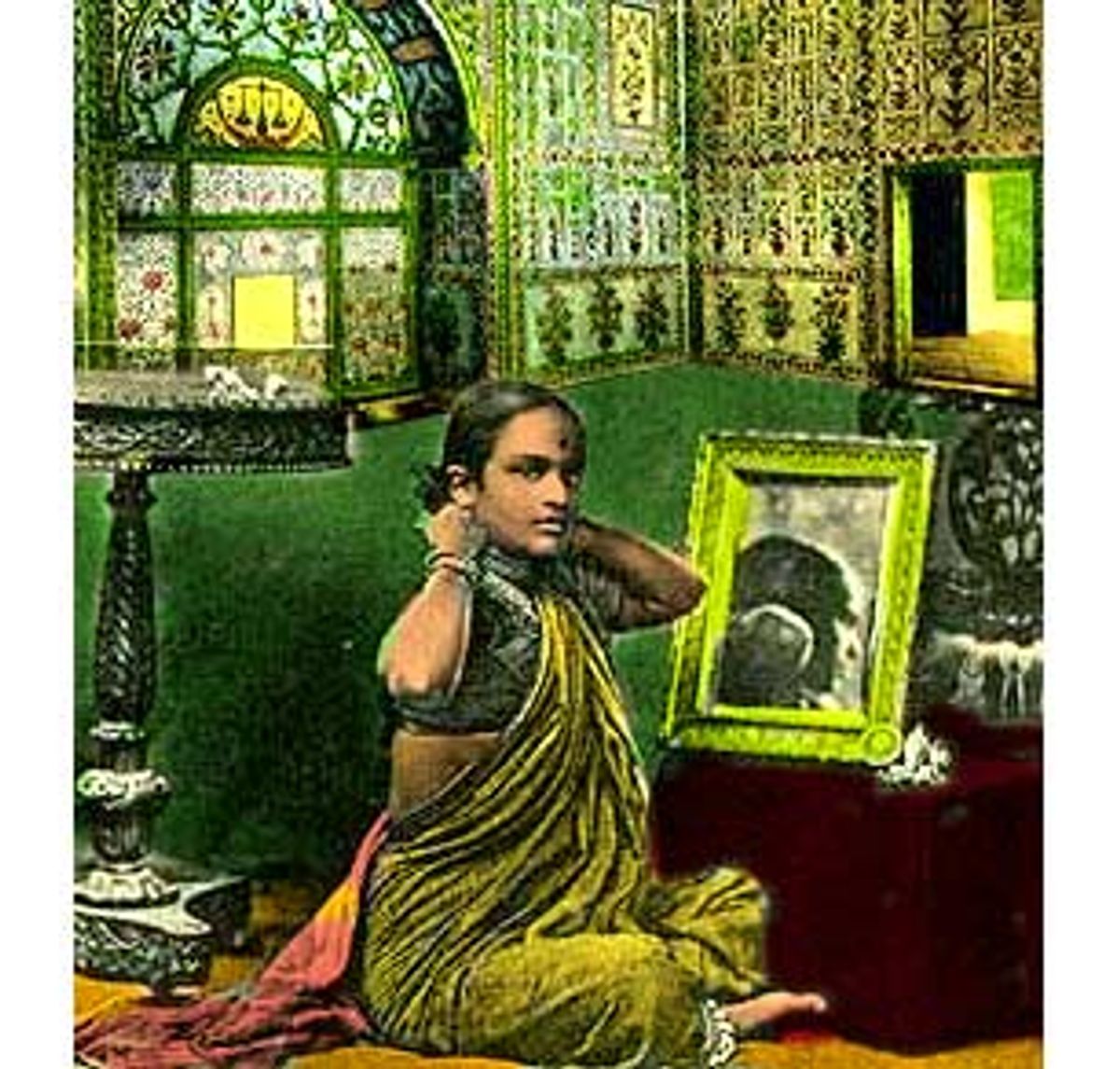 At the end of a narrow road, deep inside one of the few
remaining forests in New Delhi, I asked my taxi driver to honk
the horn. "Let's see what happens," I said.

But the driver was reluctant. He stepped cautiously from his car
and scowled at the dense stands of sissoo and teak. He appeared
to be as intimidated by this obscure patch of Indian forest as I
had been by the crush of cars that converged recklessly at the
traffic circle where we had met an hour earlier.

The horn blast that followed smashed through the woodland
tranquillity like squealing tires on suburban asphalt. But no
sooner had the sound begun to fade over the forest canopy than it
was overrun by a chorus of barking hounds. "It's the Doberman
pinschers," I whispered, as if their ruckus was a sign foretold
to me by an Indian mystic and not, as it had been, by a
middle-aged porter at New Delhi Railway Station. "Find the dogs
and she will be close," I said, repeating his cryptic
instructions aloud.

Wary of who "she" might be, or perhaps girding himself against an
onslaught of salivating hounds, the driver stepped back inside
his taxi and closed the door. "When your business with the lady
is complete, you will find me waiting," he said. "Please don't be
hurried. Price is same."

Among the taxi drivers who swarmed around me that morning trying
to hustle guide services, this one seemed to appreciate my sense
of off-the-beaten-path adventure. I'd already seen the Red Fort,
the presidential palace and Parliament buildings; been thrust
unwillingly into gem emporiums and carpet shops; and even toured
the Birla Temple twice (the second time because my driver didn't
seem to understand my use of the word "no"). This time, I chose a
guide carefully and explained my expectations clearly. "I want a
unique travel experience," I told the driver. "I want to meet an
Indian queen." Now, here we were at the first difficult juncture
and he appeared to be abandoning me.

"If you hear me shouting for help, you will come running ...
won't you?" I asked.

But the driver would have none of it. "I drive the taxi," he
said. "For heroics you must call Mr. Rambo."

I suppressed an urge to update him on American action hero
archetypes and instead smiled anxiously, wondering who then would
come to my rescue if I should run into difficulties. As I
traversed a narrow trail leading deeper into the forest, my
thoughts of rescue escalated as the sound of the dogs grew
louder. Like infantry lying in wait across a battlefield, they
sniped at each crackle and rustle as I made my way along the
trail. And then, just when I felt certain they had surrounded me,
I saw two hand-painted signs. The first confirmed my fears. It
read: "Be Cautious for Hound Dogs!" But the second replaced the
fears with delight, as it became clear that everything I'd been
told was true. It read: "The Raj House of Oudh. Entrance Strictly
Forbidden."

I'd first heard about the Raj House of Oudh and its self-anointed
"begum" (the Muslim word for queen) while visiting India some
years earlier. Although all Indian royal families had been
stripped of their titles in the early 1970s, Wilayat Mahal had
become a celebrity of sorts. For more than 13 years, this
great-granddaughter of the last ruler of Oudh had taken up
residence at the New Delhi Railway Station, squatting imperiously in
the VIP lounge just off Platform 1. She attributed her sparse
surroundings to a historic injustice -- a grievance stemming back
to 1856, when the British annexed the kingdom of Oudh and deposed
her ancestor, King Wajid Ali Shah. Today, like all former
princely states, Oudh is part of the Indian confederation, and
its family palaces have been converted into schools and
government offices.

Despite this harsh reality, Mahal had devoted her entire life to
preserving her aristocratic heritage. Even in her train station
home, a dark room without running water or electricity, she
reportedly sat majestically atop a raised platform, wrapped in a
black silk sari, while dictating letters to "Elizabeth" at
Buckingham Palace and India's prime minister, demanding the
return of her ancestral kingdom.

Sometime between my visits to India, the government agreed to
move Mahal, her two adult children, 12 Doberman pinschers and
five ragged servants to the old hunting lodge about 200 yards
from where I now stood. But it was the thought of her in the New
Delhi Railway Station -- pain on her face as a crackling
loudspeaker trumpeted each train arrival and departure -- that I
found so gripping. Mahal's determination to preserve the past
while testing the bounds of the present seemed to embody India's
underlying conflict. Meeting her, I suspected, would tell me more
about this land than any museum or mosque.

"Hello," I shouted toward the lodge, mindful of the warnings on
both signs. "I've come to meet the begum of Oudh. Is she home?"
There was no answer.

"Hello," I shouted again, this time trying to make my intrusion
appear more professional. "I'm a journalist. I'd like to
interview the begum. May I come up?"

My willingness to walk the remaining distance to the lodge seemed
to incite the dogs. They whimpered and jumped, knocking into one
another as they jockeyed for position behind large iron gates.
But it wasn't I who had provoked them: Someone was coming out to
greet me. Splinters of sunlight fell over the path and I could
see it was a boy, maybe 14 or 15 years old. His tunic and turban
were frayed and obviously meant for someone much bigger. When he
reached me, I noticed he wore gloves and clutched a badly
tarnished silver tray.

"I'm really sorry to bother you," I said, suddenly embarrassed by
all the honking and yelling. "Would it be possible for me to meet
Wilayat Mahal, the begum of Oudh?"

He didn't answer. Instead, he held out his silver tray and said
with authority beyond his years: "Petitions for great audience
must be in writing."

His cool demeanor made me feel I'd met him before, or perhaps it
was the thousands like him across India -- ticket agents, tour
guides, hotel clerks and bank tellers -- with the same vacant
faces. Was this an expression of good breeding or of great
boredom? I was never quite sure.

Using the boy's silver tray as a tabletop, I decided to keep my
note simple. "To Whom It May Concern. I am a journalist with an
interest in India's royal families. I would like nothing more
than to meet Wilayat Mahal and ask her some questions."

Within a few minutes, he returned with Mahal's reply. Written on
heavy parchment paper with "The Rulers of Oudh" embossed in gold
at the top, it read: "When you are unaware to whom you attend --
We do not refrain 'To Whom It May Concern.'"

Refrain? I read the note several times, trying to make sense of
it. But it was the boy's prompt departure that made Mahal's
intent painfully clear.

As I walked back to the car, I felt foolish for thinking I could
drop in on a queen, even if she didn't really have a kingdom. The
taxi driver, although happy to see I had not become dog food, was
eager to move on to a more traditional tourist stop -- after
which, I suspected, he planned to deliver me like a fatted calf
to wolfish carpet and gem merchants. For the moment, however, I
put my suspicions aside and showed him Mahal's note.

"She writes to you on paper with gold letters," he said. "To
prove you are worthy of her attention, you must seduce her."

My first reaction was to laugh. But then I began to see his
point. Right now, she had no reason to talk to me. I was neither
important nor sufficiently ingratiating.

Seduction of the queen was a task I felt oddly equipped for.
Growing up in Canada, I'd already invested hundreds of hours
pledging, saluting, toasting and singing my praises to a monarch.
By comparison, this would be a snap. Pulling out my pad and pen,
I began crafting another letter. This time, I thoroughly greased
the page with words I imagined would make any royal positively
weak-kneed.

"As you are the head of one of India's oldest royal houses and
greatest kingdoms, I humbly request one hour of your time," I
began. As a further inducement, I asked the driver to take me to
nearby Malcha Market, where I had the letter typed.

Later, when the same boy answered my call, I couldn't resist
bowing slightly before setting the crisp, white page upon his
tray. Then I waited. For more than two hours I stood staring at
the old lodge, trying to imagine what the queen's life must be
like behind its crumbling facade. A little more than a century
earlier, Mahal's great-grandfather had lived in a magnificent
palace, surrounded by beautiful courtesans, artists and
musicians. Perhaps that's what provoked the British annexation in
the first place. Oudh was a kingdom in pursuit of sensual
pleasures, not sensible ones. Across Asia, it had become renowned
for dance and poetry, for opium and exotic perfumes, and for
growing the best roses. But Mahal's forest lodge had no gardens.
Her servants had to bicycle a half-mile just to fetch water for
tea. This was a dismal and decrepit place, in which the Kingdom
of Oudh lived on solely in her imagination.

When the boy returned again, he carried two large sheets of
paper. As before, the message was cryptic. "We demand no sympathy
this regal class of ours," the first page began. "Clinging to the
past we may be crushed. The spider web intrigues against the
Royal House of Oudh. We are paying the debt of nature and trust
to the natural defenses." Her words were like riddles, revealing
everything and nothing at the same time. Then I reached the last
two lines, and my heart sank. "You have been commended an
interview Nov. 26 at 3:30 p.m. sharp. If yes, inform the bearer."

Without a word, the boy turned and walked away. I wanted to go
after him, to stop him from delivering this final message, but
all I could do was move a few steps closer to the old lodge and
wonder about the curious lives of its inhabitants.

When I got back to the taxi, the driver made no inquiries about
my last trip into the woods. Instead, he turned the key in the
ignition and began navigating his taxi along the narrow road
leading out of the forest.

"Now, I will take you to the Birla Temple," he said.

James Heer is a Canadian writer and documentary filmmaker. His work has appeared in The New York Times, The Washington Post and the L.A. Times.