I never expected anyone to save all my letters -- but I really didn't think they'd sell them. 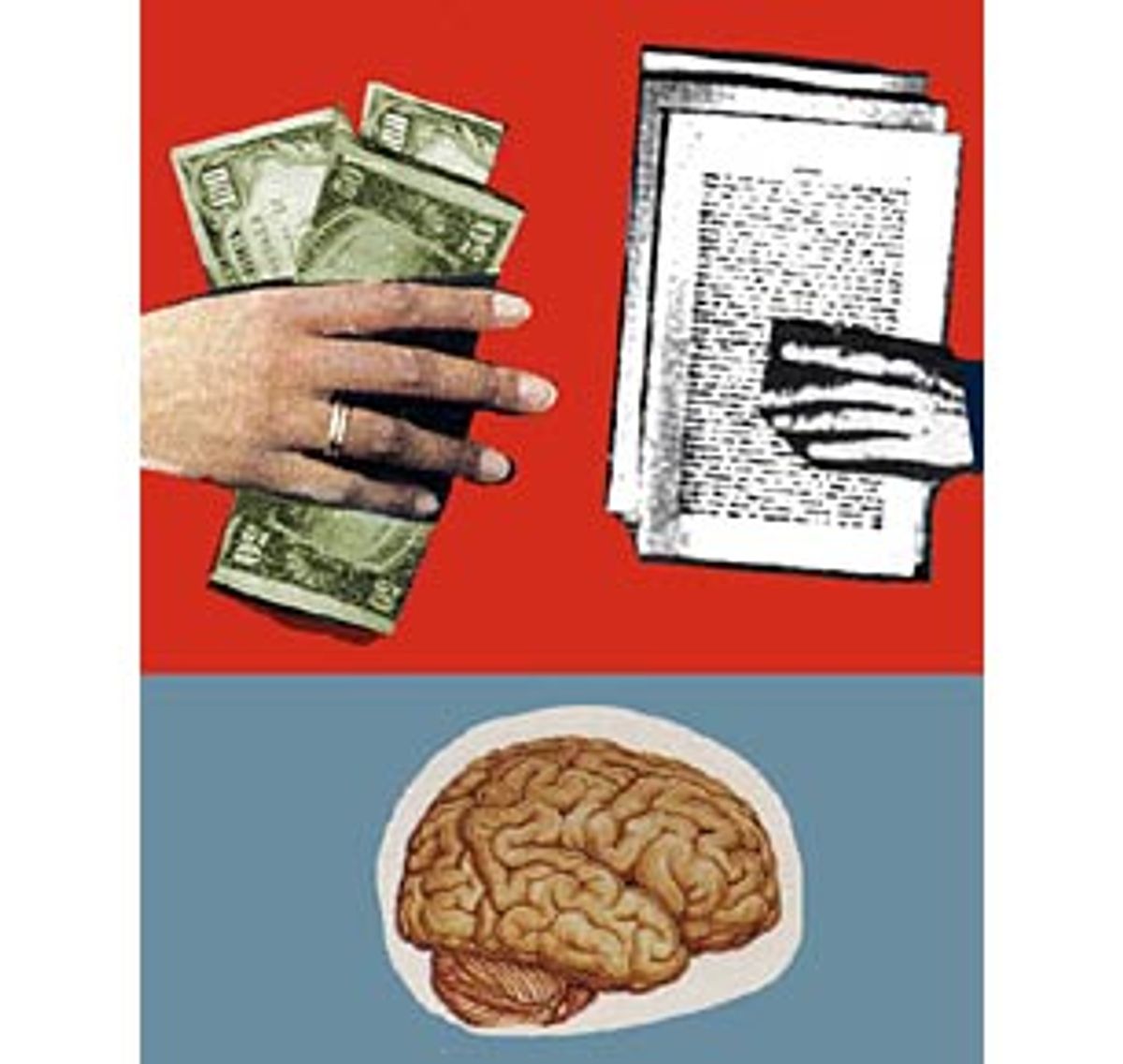 Last year I received an e-mail from a student in my online
fiction-writing class saying she'd discovered a Web site she
thought I'd find "gratifying." I was instantly intrigued, rarely
having received anything gratifying from a writing student
before. The URL she gave me turned out to be a bookstore in New
England that sold first editions and signed copies. And, indeed,
the site had a listing for a signed copy of my novel, "Arabian
Jazz." Innocent enough, I supposed, if I let go of the instant
grudge-thought that some book collector had flattered me into
signing a hardcover and then turned a nice little profit on it.
But then I looked closer at the listing and found that the
bookshop had sweetened the deal by including with my novel a
collection of "seven long personal letters detailing the author's
educational and work experiences while pursuing her Ph.D." These
letters, the listing promised, would reveal "details of her
hopes and plans, her frequent moves, her marriage and divorce,
her loves and adventures."

And I wasn't even dead!

After reeling with mixed astonishment and skepticism at the
thought that I'd ever had "loves and adventures," I recovered
enough to see that they wanted $125 for the packaged set. I then
vacillated between feeling flattered that someone thought my old
letters could fetch anything at all and insulted that my hopes
and plans and loves and adventures -- whatever they might turn
out to be -- amounted to a mere $125 on the open market.

Always up for an adventure, my boyfriend, Scotty (he comes after
the marriage and divorce), called and spoke to the bookseller
with a shameless pseudo-English accent, pretending to be a
collector. The bookseller -- who you might think would be eager
to unload an item with a vaguely sinister if not outright
black-market provenance -- refused to negotiate or to sell the
letters alone for a flat $100. But he was an amiable enough
sort, and he was quick to reveal the source of the letters: my
old college advisor.

Like anyone whos ever discovered that a secret is out, I
immediately started kicking myself: Why did I trust that
guy? My advisor, now retired, had been the head of the
writing program at State University of New York at Oswego.
Formerly of the CIA or the Green Berets -- I forget which -- he
taught his poetry class by reading our sonnets and villanelles
out loud while slamming out the beat with a yardstick on his
desk. Sometimes he would march in place at the same time. Why did
I ever write letters about my loves and adventures to this
lunatic?

I've decided that it had little to do with him -- it was the very
act of writing letters that seduced me. I had always trusted
letters; they were magical to me. Every person I addressed on
paper became an idealized recipient: good, kind, generous,
forbearing. Sitting down to write a letter would put me in mind
of my grandmother, who would arrive at our house with a layer of
correspondence lying in wait at the bottom of her suitcase. These
were not her letters to me, but rather letters Id written
to her, each of them covered in red ink. She corrected my
letters! After the unpacking of the suitcases and the
distributing of the multifarious cakes and cookies she had lugged
onto the Greyhound bus, we would sit at the small desk in my
bedroom while Gram went over my pre-teen ramblings line by line
and quizzed me: "Now, how do you spell 'Popsicle'?" In these
letters to Gram, I learned how to squeeze the nectar of news out
of the daily banalities of elementary school. And it wasnt just
the content of letters that was intriguing, I soon discovered,
but also their form -- the stationery, the ink, the particular
penmanship that elevated each missive into an article of intimacy
and disclosure, an ever-renewing pact between friends.

Besides my grandmother, I never expected anyone to save all my
letters (as I do theirs, guiltily -- even two-word Christmas and
thank-you cards -- toting bursting trunks of yellowing pages
through my frequent moves). But I didn't expect anyone to sell
them either. I considered writing a curt letter to my
treacherous ex-advisor, attaching a little price tag  maybe $5.98
-- in the upper corner. But my native sloth got the best of my
sense of injustice and outrage, and for a while I neglected to do
anything at all about it.

Two weeks later a package arrived from UPS. Scotty signed for it
and handed it to me, even though his name was on it. A present,
he said. And it was: There were the letters, all seven of them.
The first one dated from a time when I still referred to the
ex-advisor by title ("Mr." He never did finish his Ph.D.) and I
still wrote in cursive: big, round, earnest loops. The loves and
adventures chronicled were long-forgotten dates: a trip to an
apple orchard, an excursion to a beach. As far as my hopes and
plans went, I asked the ex-advisor a naive question about the
difference between writing for love and writing for money. There
were several mentions of grad-school teachers whod encouraged me
to drop out, move to New York City or Hollywood, and do something
more fabulous than they were doing. There was even the startling
but quickly discarded notion of writing for the National
Enquirer. I also wrote about buying a word processor, starting to
teach and a few other mundane matters.

I was delighted, for once, to see how uneventful my life had
been.

Since then, Ive mulled over what could possibly have moved my
ex-advisor to sell my letters. Certainly he didn't make all that
much from the sale. It seems like hawking your hair or
fingernails: something you dont want to do until you pretty much
have to. And even then, it strikes me that some outdated notion
of loyalty or sentiment would make such a transaction feel, at
least, inconvenient. But perhaps he never thought of me at all.
Its possible that the activity of letter-writing has come to
seem so anachronistic or quaint that, like certain antiques,
people traffic in them not so much for their function or
beauty as for their whimsy, personality, the whiff they give off
of a fading history.

While I still cant quite get over a lingering indignation that
my boyfriend had to pay to get my words back -- a sort of
demented twist on self-publishing -- Ive learned, more literally
than I ever wanted to, the value of keeping quiet. I havent had
the heart to confront the ex-advisor, now referred to in our
household simply as Snidely, or Mr. Whiplash. But I tell myself
that the twin gods of bad conscience and bad karma may have
struck pangs in his heart more efficiently than I ever could have
done, and that's comforting. And I reassure myself that, as far
as my grandmother was concerned, red corrections were one thing,
but not writing back was always the worst punishment.

Diana Abu-Jaber is the author of "Arabian Jazz" and is writer-in-residence at Portland State University.