The story is just like any other, except it's very cold. And people eat each other. 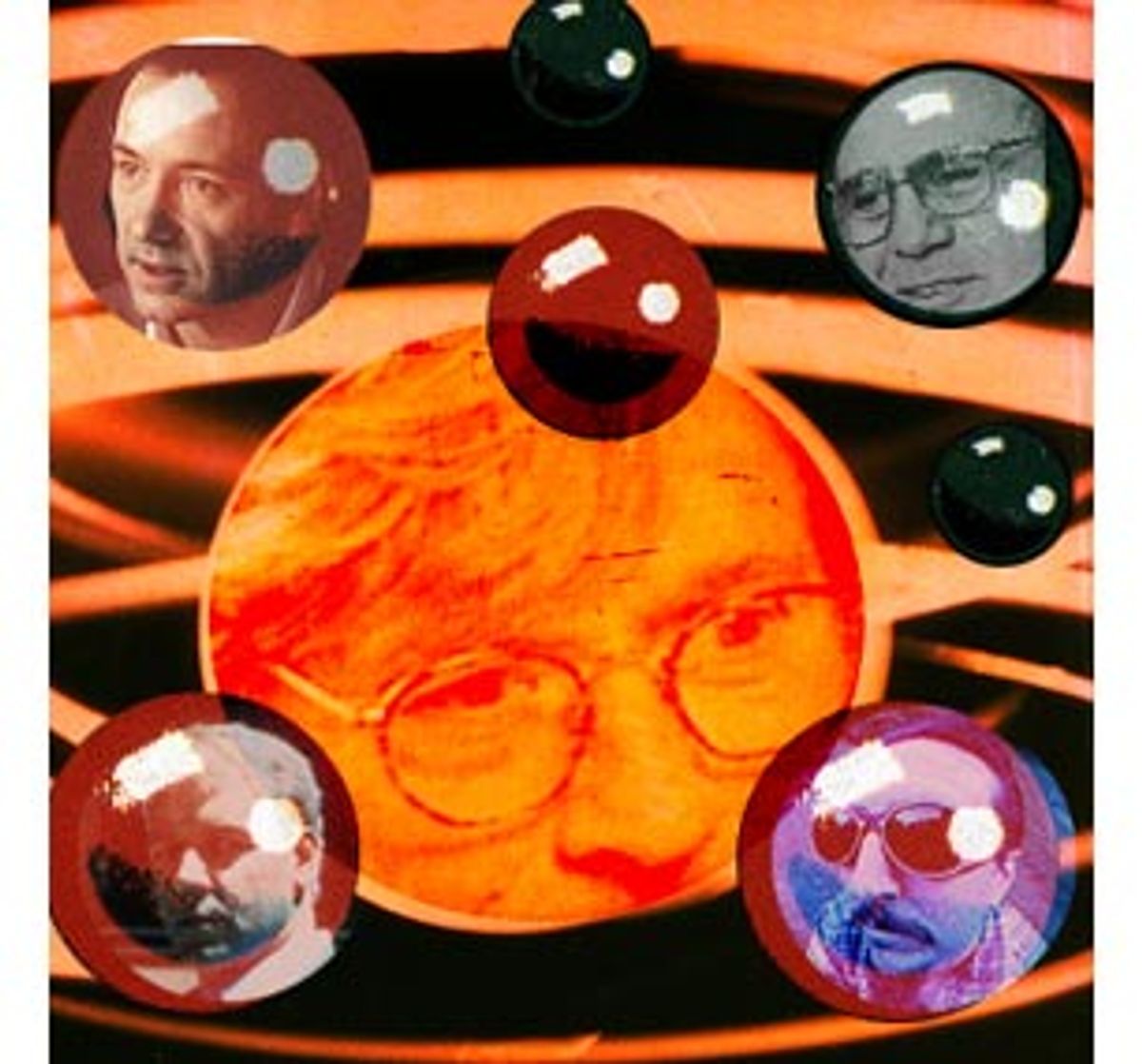 It sits nestled in the majestic, snowy mountains of Utah, far from the maddening Hollywood crowd. From this vantage point, it can spot a struggling independent filmmaker from miles away. Wings outspread, it swoops down on the downtrodden and lifts them to soaring new heights of creativity and autonomy. It is, of course, the Sundance Film Festival. And everything I'm saying is, naturally, utter horseshit. Except the part about Sundance being in Utah.

During one of the many stints when Trey lived on mac and cheese and had fungus growing on him somewhere due to substandard living conditions, he made a film. It was at CU-Boulder. He had sloughed off the rest of his classes and focused all his energy, day and night, on researching, writing, scoring, producing, directing and starring in his student film, "Alferd Packer: The Musical." (Now called "Cannibal: The Musical.")

The story is just like any other, except people eat each other. Packer was hired in Bingham Canyon, Utah, to lead a group of miners to Breckenridge, Colo. Well, along the way they got a little lost, got a little cold and then, one by one, got a little dead. Come spring thaw, the only one to emerge from the dreadful cold was Packer. Lots of questions ensued, and finally Packer admitted that he and the men had resorted to cannibalism, and that he had been forced to kill the only other survivor, Shannon Bell, in self-defense.

With a plot like that, how could you not make it a musical?

And with the story beginning in Utah and Mr. Redford being an alumnus of CU-Boulder, how could they not send it to Sundance? So they did, and then the wait began. In fact, the wait never ended. No one at Sundance even sent them a rejection notice.

But you know what? They didn't care. They didn't have "Citizen Kane" on their hands. They took a long shot and missed. So, with nothing to lose and lots of experience to gain, the crew drove up to Sundance hoping to hold a guerrilla screening of "Packer": a raucous midnight event held under much-less-than-ideal technical circumstances.

Well, if you want to hold a screening, you need to get the word out. And if you need to get the word out, you call on one man: Jason McHugh. Yes, one of the founders of CrapTV and the Lapdance Film Festivals (more on these in a bit) was a producer and star of "Packer." So there is Jason, roaming Main Street in Park City, tacking up makeshift posters, when suddenly he's attacked! The official Sundance Nazis have accosted him in the street and torn down his posters.

"You can't hold a screening here!" screamed one. "Your film wasn't chosen!" yelled another. "We want you out of here!"

What's this? What of the independent spirit? What of the "Packer" crew's ingenuity? The problem that film festivals such as Sundance claim to address is that Hollywood studio productions are prohibitive because of the scale of their +/- columns. Sharpen your eye on quality, say the independents, and money doesn't matter nearly as much. I agree. But prohibiting "Packer" from being shown because it wasn't chosen for the festival? Kick me out of your stodgy private party because I'm rowdy and I like to rock -- I can live with that. But tear my shit down on a public street and try to stop me from exercising my legal right to hold a screening in some shitty rented hotel anteroom -- fuck you, I say.

And that's what Trey and Matt said. They held the screening anyway, which was a huge success, and now Trey, Matt and the "Packer" crew are credited with helping start Slamdance, the first "official" film festival other from Sundance in Park City, which premiered the following year. (Later came UnDance, JamDance, SlamDunk, Lapdance, et al.) Slamdance was founded by two guys who happened to be at the "Packer" screening and thought that the idea of saying "fuck you" to hypocrisy kicked ass.

But if you've been to Sundance, you know the sweet irony of it: It's not about the movies, it's about the parties. Just like Hollywood! On ice! It was at one of these Sundance parties that Trey and Matt met both Kevin Morris, the most badass lawyer in the City of Angels, and George Brandon, superman of the stock market. Well, Kevin and George loved "Packer," and encouraged Matt and Trey to head west.

Kevin made the guys some pivotal contacts, and George (and his family) let them sleep on their couches for a few months. This is the way things get done. (Today, Kevin is their lawyer, George their stockbroker.)

Then followed another long mac and cheese period and, again, a fungus.

Fast-forward to the 1996 Sundance Film Festival: the powers that be want to show "The Spirit of Christmas" in the animation section of the festival. They come to Matt and Trey and ask for it. This is after "Spirit" is already huge, and the guys have been picked up for the "South Park" pilot plus six episodes. In short, once it looked as though Trey and Matt were going to be a Hollywood commodity, Sundance started licking its chops.

Also during that second fungal phase, Trey and Matt kept busy making another movie. It was called "Orgazmo." Trey again wrote, produced, directed and starred in the picture, while Matt produced and acted as well.

Once the film is complete, they submit it to the Toronto Film Festival, and it gets accepted. Toronto ran early September 1997. I know this because I was there. I moved to L.A. in August, totally green, and by September was sitting down to casual scotches with Russell Crowe, Kevin Spacey and one other guy from "L.A. Confidential." I ran into Danny DeVito, too, but he was a dick to me.

After "Orgazmo" screens, October Films snatches it up in the lobby. Now shit is really going down for Matt and Trey.

About two weeks later, the phone rings ... Sundance on the line.

The point is, don't be fooled. And don't think you have to travel all the way to Sundance to get fucked over, either. Just pick up Bob's Sundance catalog and buy an authentic Sundance lamp for $4,000. You'll feel good and fucked, I'm sure.

And yet, although the story of Trey and Matt's Sundance experiences had been trickling in over the years, I felt I should see it firsthand before passing judgment. So, I went for the first time in January to help Jason and his hot sister Brody set up Lapdance 2000. (Brody and I went out for dinner once. Not a super-serious date, although I did take a shower. It was a nice time, but I think she was a little wary of me. Still is. No matter how sincere I'm being, she always has a twinge of distrust in her eye, like I am up to something. Very smart.)

And just the kind of savvy woman you want to throw a rocking party. Lapdance 2000 was the ticket. (Last year saw the first Lapdance party, and when asked about it in an interview, Robert Redford called it "the lowest of the low." Needless to say, no one could wait until this year's.)

There were drinks and dancers and video links and short films. And unlike two nights earlier, when I'd walked into the same space and suddenly found myself forced to endure Third Eye Blind, CrapTV put together the hottest musical ticket in town for Lapdance 2000. Vinyl, a Bay Area funky reggae band got everyone groovy. And DVDA opened with their freshly penned "Robert Redford Fucks Babies," and turned the dial to full on. And finally, the coup de grbce was delivered by Les Claypool and the Holy Mackerel. They are fronted by the eponymous Les, who can also be seen and heard fronting a cute little rock 'n' roll band called Primus.

Overall, there was much to excite the senses, including the little pierced nipple show I got downstairs and a simultaneous sister make-out.

But those are two other stories.