The rise and fall of Mexico's Madonna

Pop goddess Gloria Trevi captivated a nation and became an icon of female sexuality and power -- until allegations of her involvement in a lurid child-sex scandal. 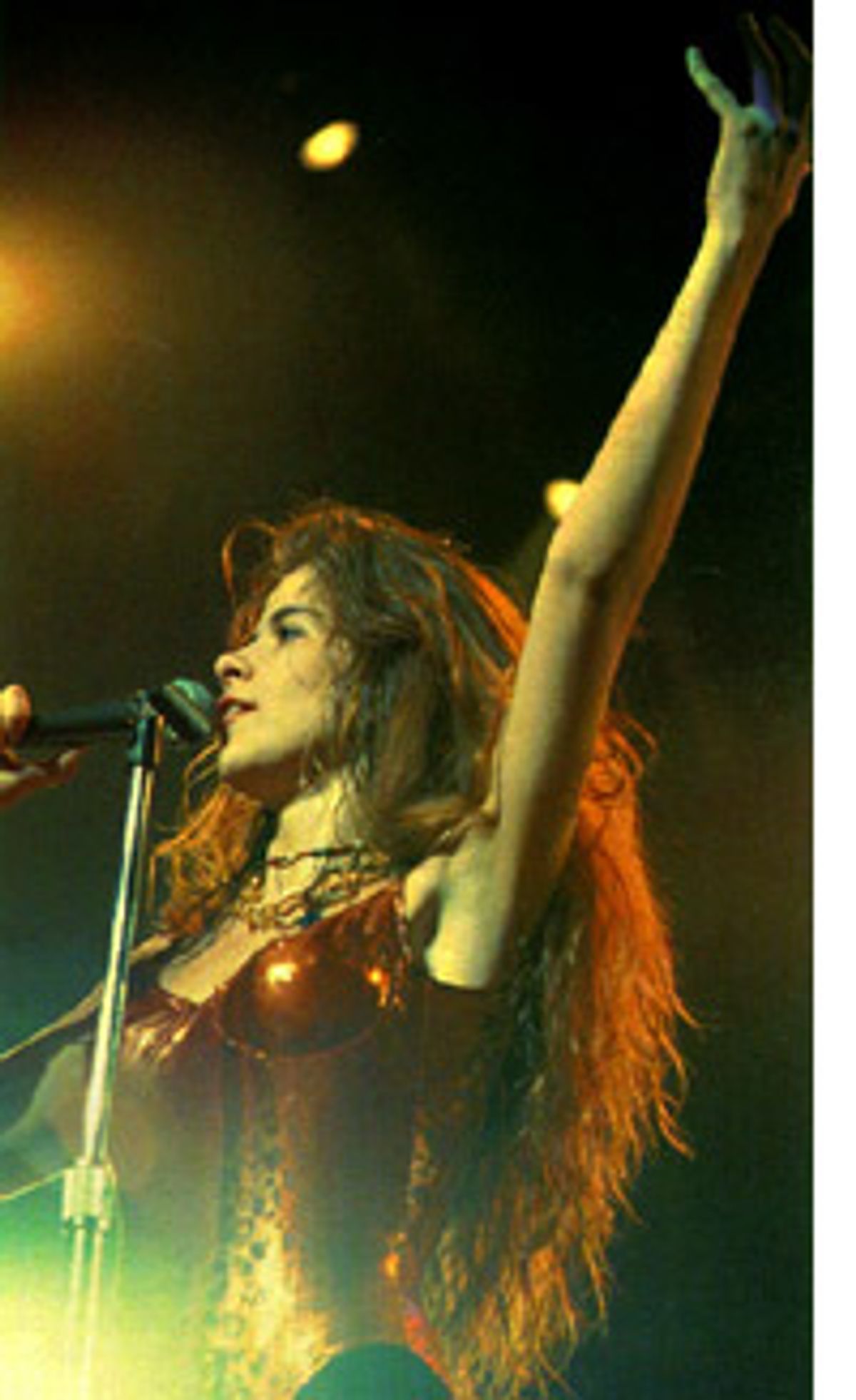 The last time pop star Gloria Trevi was seen in her native Mexico, she was writhing on stage, belting out rebellious lyrics that made her a feminist icon to thousands of young girls. The next time Mexicans saw their diva, she was considerably more subdued, calmly being led to jail after her arrest in Brazil on charges of kidnapping, child corruption and rape.

Trevi, who rose to fame throughout the 1980s and '90s with the bold irreverence of Madonna, was arrested Jan. 13 along with her longtime manager Sergio Andrade and fellow singer Marma Raquenel Portillo after being on the lam for almost 10 months. Charges allege that Trevi and her group, dominated by the cult-like leadership of Andrade, helped Andrade lure young girls under his musical tutelage, after which he would force sex on them and beat them. Trevi, Andrade and Portillo are all awaiting extradition to Mexico.

The day after their arrests, Trevi and Andrade's mug shots littered the Mexican press. Trevi, not yet 30 and still girlishly attractive after being on the run, appears relaxed and smiling, in freshly applied red lipstick. Next to her stands Andrade, fat and surly, attempting a weak smile at the cameras.

The nation has turned obsessively to analyzing the relationship between this unlikely couple, and Trevi's role as both victim and victimizer. The press, supplied with a seemingly endless amount of skimpy photos of Trevi retrieved from her racy calendar series, splashes her near-naked image on broadcasts and across front pages throughout the country.

Trevi as the devil, with tail in swing; Trevi in a baby carriage wearing nothing but a diaper, with her legs flared up in the air and her arms covering her breasts; Trevi King Kong-size, lying naked in front of miniature Mexico City monuments. The public does not seem to tire of her jaunty image, nor of her unseemly tale.

While Trevi fans search for an explanation, the scandal produces stunning new developments almost every day. Trevi's fall from feminist role model to male-dominated sex-peddler leads the news. Headlines scream "Nailed!" and "Trevi Cries, Claims Innocence." Both Mexico's first-ever democratic presidential elections and the country's paralyzing nine-month university strike are pushed to the back half-hour of TV newscasts. The torrid tale has not only soiled a national celebrity; it has incited finger-pointing at the country's powerful media.

The controversy began more than two years ago when Karina Yapor Gsmez, a Trevi-Andrade musical protg who was legally put under the couple's care at the age of 12, gave birth at age 15 to a baby boy. (The legal age of
consent in Mexico is 14.) Yapor, who was by then living with the couple and half a dozen other young girls in Spain, claimed that the child was fathered by a young Spanish lover, not by Andrade.

But suspicions were aroused four months later when Andrade's ex-wife, Erika Aline Hernandez Ponce de Leon, once a starry-eyed Andrade disciple herself, came out with a tell-all titled, "Aline, La Gloria por el Infierno" ("Aline, The Glory by the Inferno", a play on Trevi's nickname, "La Gloria"). The book described Andrade's dominance over Trevi and her entourage, and detailed the pair's sexual perversity. Furthermore, the bestseller accused Andrade of forcing sex on Trevi protgs, provoking speculation as to the true father of Yapor's baby.

In a dramatic turn of events, Yapor abandoned her then 7-month-old infant in a Spanish hospital. Six months later, Yapor's parents went to collect the child. Upon their return to Mexico, they filed charges against Andrade, Trevi and Portillo, claiming that Andrade kidnapped their daughter and forcefully fathered her child, while the two women passively stood by. When the police began their search, the group had already disappeared.

Almost seven months later, Yapor called her parents, begging them to drop charges against Trevi and Andrade in return for her long-awaited return home. Her parents refused. Yapor then startled the nation a month later when she suddenly reappeared in Mexico on national television, defending the pair and again pleading to her parents to drop the charges.

"I owe them" -- Trevi and Andrade -- "a very big apology, because they were always very nice to me," Yapor said in a statement that local press described as wooden.

Yapor, now 17, returned to her family home where she immediately fell silent. The girl's ambivalence to say more about the scandal alarmed her parents, who stuck by their charges. In the latest turn of events, this week Yapor testified to a state judge in Mexico that Andrade did father the child, but she said he did not rape her. Lawyers say her testimony could prevent Andrade's prosecution on felony sex charges.

The dubious pair was finally tracked down by Interpol in Rio de Janiero almost 10 months after their disappearance. They were living with six women and three babies. One of the women was Marma Raquenel Portillo (known as "Mary Boquitas"), a former Trevi back-up singer who was arrested for collusion with Trevi and Andrade. The other five young women (one pregnant) are being investigated while the three babies are undergoing DNA tests to see if they, too, are possible Andrade offspring.

A Chilean accuser, who recently filed rape and kidnap charges against Trevi and Andrade in Chile, says she is willing to travel to Mexico to testify against the couple. The girl joined Trevi's group in 1995 when she was 12, and claims that she was later repeatedly raped and beaten by Andrade.

Trevi fans, who had long seen her as a progressive female role model, were shocked to see evidence that she was in fact a male-dominated puppet.

Trevi's rise to fame was not that of a typical Mexican star. Born Gloria de los Angeles Treviqo Ruiz, she signed a contract at age 15 with the country's powerful, and at that time only, TV network, Televisa. It was then that she was first introduced to show business -- and to the man who would shape her life. Andrade managed the girl group that first brought Trevi to the public's attention. He later stayed on as her manager. Together, they produced seven albums, a series of sexy calendars and movie appearances.

A far cry from the bubble-gum starlets the network usually produced, Trevi was edgy. Her lyrics -- on everything from pregnancy to running away from home -- were considered provocative and deep.

In a nation where children are expected to live at home and abstain from sex until they marry, Trevi's lyrics hit a chord with young people who were fed up with what they saw as outdated traditions and gender roles.

Trevi's publicity campaigns painted her as a wild woman who fought her way out of a neglected childhood to become a blockbuster star. Her primary audience, young people from poor backgrounds, fed off her streetwise style and brash independence.

Trevi's Web site was put up at the height of her career and has not been updated since. It exemplifies the image Trevi wished to project. Recounting Trevi's childhood in a poor, abusive family, the site describes a discarded little girl who followed her dreams.

"Doors did not open immediately for Gloria Trevi," the site gushes. "Life in the streets was lonely and difficult for several years. She survived by singing on street corners and buses for change, selling tacos from a makeshift stand and teaching aerobics 12 hours a day. All the while, she studied music and dancing and held tight to her dreams."

Wailing to songs like her 1991 hit "Pelo Suelto" ("Hair Down"), while wielding her ratty, auburn mane and undressing young boys onstage, Trevi shaped her raucous image. "I'm going to wear my hair down! I'm going to do what I want!" Trevi cried.

Ironically, it seems that's exactly what Trevi didn't do. Her career choices, public persona and private perversities were all reportedly concocted in the mind of Andrade, who used his control over Trevi to draw their entourage into a web of sex and dominance.

But Andrade's manipulation is only one explanation for Trevi's stunning fall. Although Mexico is a country that adores juicy scandals, the sheer amount of Trevi coverage has raised even Mexican eyebrows. The weekly political magazine Milenio, among others, has speculated that the nation's powerful media is behind the phenomenon. Trevi once managed to step on the toes of both of the country's heavyweight TV networks. Perhaps now she is paying the price for her insubordination.

Originally Televisa's darling, Trevi agreed to sign a lucrative contract with newcomer TV Azteca when the budding network got up and running in the mid-'90s. Azteca management, gloating over its conquering of Mexico's hottest star, staged a media blitz promoting its new Trevi partnership. But when it came time for Trevi to start work with the network, she suddenly returned to Televisa.

In what many see as an act of revenge, TV Azteca began publicizing the book "Aline, la Gloria por el Infierno." The book's allegations, fueled by Azteca's publicity, made Trevi unwanted property. Televisa was stuck with a controversial star and purportedly fired back with its own Trevi defamation campaign. Trevi's stardom was no longer bankable, but her infamy was.

The current media blitz is said to be the dueling networks' final act of vengeance on their prodigal star. Thanks to non-stop coverage of the scandal, even if Trevi is found not guilty, she will be virtually unemployable.

Many of the rest of the media have also changed their tune on the star. Early coverage of Trevi's bold and irreverent persona painted her as a role model for thousands of young girls growing up in Mexico's male-dominated society. But some press outlets are now expressing a tangible sense of guilt and befuddlement that they did not reveal her sordid entanglements from the start.

Carlos Monsivams, a famed social and political commentator who wrote on Trevi in the early '90s, sadly returned to his subject last month in an article entitled "Trevi: The Phenomenon" in the political magazine Proceso. "I described the festive spectacle," Monsivmas writes, "and did not warn of what no one spoke of then -- the profound antifeminist conduct of Trevi, her surrender to the most deplorable patriarchy."

Despite all the accusations, the nation has been left with an overwhelming sense that it is not truly Trevi's fault. Some fingers point to the country's two powerful TV networks; others even accuse the country's ruling party of using the controversy to conveniently distract from the crucial upcoming presidential election. Even more people point to Andrade's destructive machismo, which they blame for perverting their beloved star. Some Trevi fans, refusing to believe her guilt, have staged masses and marches in several Latin American countries on her behalf.

Trevi, meanwhile, maintains her innocence. Breaking a decisive silence, the star released her first public statement last month in the form of a letter to the influential daily Reforma. The missive, riddled with childish drawings, reads:

To those who love me in Mexico, to those who don't; to my family, to my friends; to everyone who believes in me and supports me, and to my detractors: Thank you. If God wishes it, I will soon be with you.

But while the truth behind Trevi's rise and fall has yet to be revealed, her legacy is clear. Trevi's infamy is perhaps best gleaned in the lyrics of her 1994 hit, "El Recuento de los Daqos" ("A Recount of Damages") from "Mas Turbada que Nunca":

In the recount of damages ... I lost my house and my friends, everything of mine that I gave you. Among the disappeared: my resistance, my will ... and there was something mutilated, and I thought that maybe it was my dignity."