Valentine's Day is as romantic as a trip to the pharmacy. 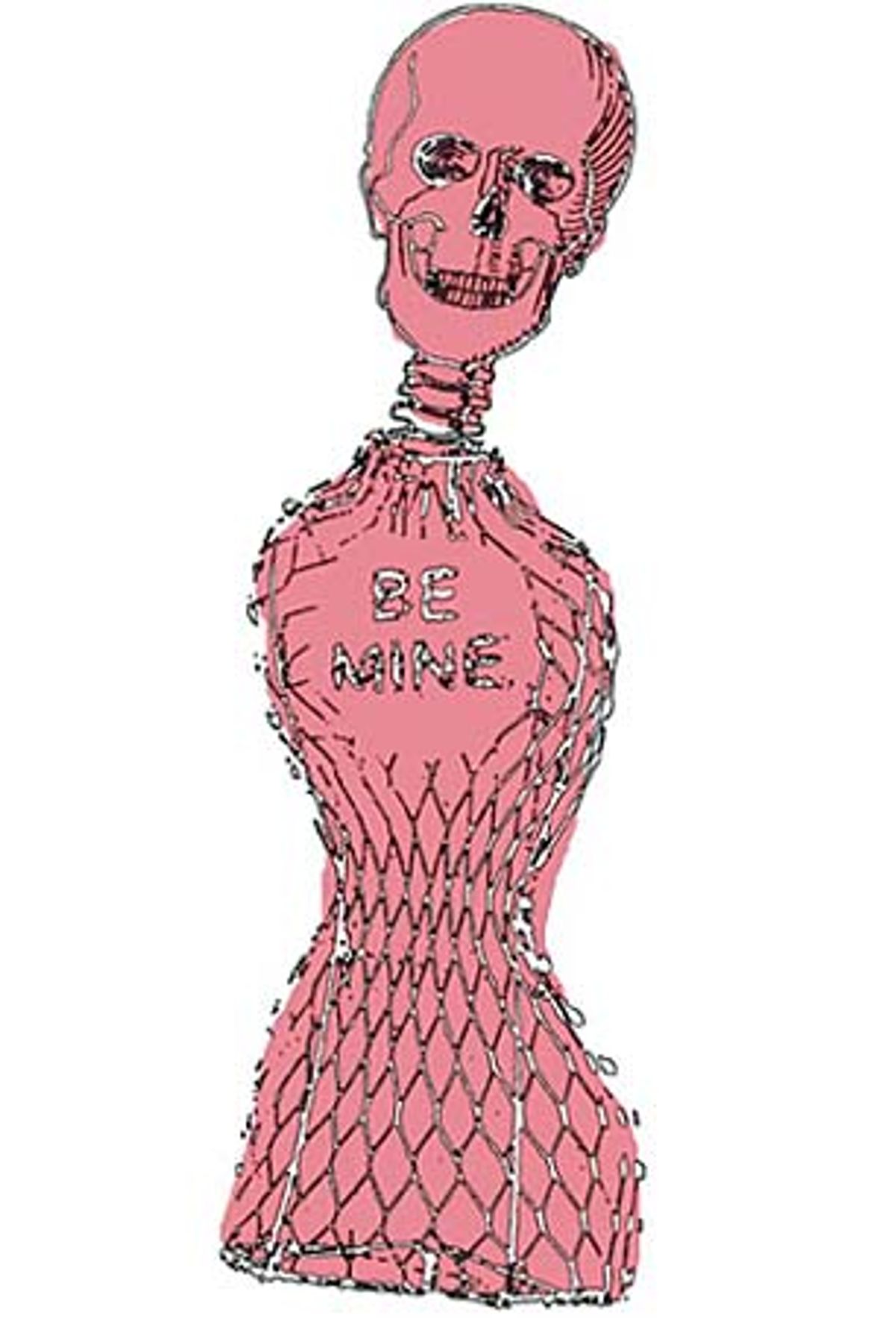 BE MINE. With that colorless turn of phrase, pressed into candy hearts of pastel pink and blue, Valentine's Day announces itself early each February in drugstore chains across America. BE MINE, of course, is shorthand for BE MY VALENTINE, which is a more economical use of
words from the standpoint of the confectioner, and one suitably euphemistic for consumers to nibble at love without risk of being taken too seriously.

Packaged and sold by weight, those candy hearts are a thrifty way to go when compared with dating services and personals ads. A 20-ounce bag bought at Walgreen's for $1.99 contains about 614 valentines. At which cost, one can
afford to proposition every woman, or man, in this country for the price of a new sports car.

A drugstore like Walgreen's is a singularly appropriate place to purchase candy hearts: St. Valentine was an epileptic third century Roman priest who began his afterlife as patron to the sick.

In fact, if ever there was any romance to Valentine's Day, history bears no record of it. On the contrary, Feb. 14, 270, was the day pagans stoned and beheaded the priest for preaching the gospel truth.

The story was good enough to make the Roman martyrology, and according to Frank Staff's "The Valentine and Its Origins," epilepsy for centuries bore the name Veltins-Dance in his honor; supplication to the saint was its only known cure. The ill flocked to churches across Europe to be near his sacred remains, housed in glass reliquaries as large as medicine chests. By a miracle of supply and demand to this day quite ignored by science and economics alike, he had attributed to him by the Middle Ages enough bones for eight bodies and three heads.

In life, Valentine could merely comfort the ill individually;
in death, he was franchised. Needless to say, treatments have since changed. Rather than faith we have Walgreen's, where we can buy chemical remedies for virtually every ailment. But while we no longer use Valentine's bones as a cure for his dance, to this day Valentine's Day remains a pretext for romantic posturing: a placebo overture to love.

Even centuries before Valentine had his first fit, February was a month for questionable fertility rites. In the beginning, Roman boys were greased and sent running naked through the streets with whips made from the hide of freshly slaughtered goats. Others, especially women, would gather
to watch the spectacle, edging close to be struck -- a whipping was a certain sign of impending pregnancy and easy childbirth.

As Rome evolved scientifically, people figured out a way to make the correlation between February and pregnancy even more certain. Rather than greasing those pubescent boys, the emperor had them draw lots. Each lot bore the name of a girl, to whom the boy was bound for the next year in what amounted to a do-it-yourself crash course in sex ed. Marriage was optional.

Useful as these unions proved from the standpoint of population growth and social stability, the system was too carnal for God's proto-Victorian tastes. So when the church took control of Rome, it also took it upon itself to replace the names of girls to be deflowered
with those of saints to be venerated. Which is how celibate St. Valentine got entangled in the sordid affair.

To preempt the dirty pagan lottery that fell on Feb. 15, the church cleverly created one of its own, one day early, in honor of Valentine.

The strategy worked for many of the same reasons New Hampshire manages to decide presidential elections by keeping its primary first. And so St. Valentine, the write-in, won the campaign against Juno, the pagan, for the holiday's name, even if she did wind up, over the centuries, with all the popular appeal.

It took merely a few hundred years, in fact, for the church to lose its stranglehold on coupling, and for Valentine's Day to fall back on its origins as love's placebo. In its newest incarnation, particularly popular in France, the system was more practical-minded than ever. Whereas the old
courtship procedure demanded the construction of wooden ballot boxes and the convergence of the whole town to oversee the drawing of lots, now your valentine for the year was simply whomever you happened first to set eyes
upon on the 14th of February. By the miracle of societal pressure, most of the new couples ended up respectably wed, freeing them to make more important decisions such as: Who shall be my mistress?

Only the British could muddle a scheme so simple, making of it something at once grossly sentimental and blusteringly ineffectual. Like the French, they based their ritual on the principle of first look, but, since they neglected to specify that both parties should be eligible, ladies of the house often found themselves looking to the 4-year-old son
of their chambermaid as a valentine. All of which was perfectly adorable, but required that courtship be abandoned in favor of gift swapping, and that allowances be made for husbands and wives to make valentine's pacts on
the side. By the time Samuel Pepys kept his famed diary, Valentine's Day had become more taxing to follow than the business of the Home Office:

14th February 1668 -- Up, being called up by Mercer [Mrs. Pepys' maid], who came up to be my Valentine, and I did give her a guinney in gold for her Valentine's gift. There comes Roger Pepys betimes, and comes to my wife, for her to be his Valentine, whose Valentine I was also, by agreement to be her so every year; and this year I find it likely to cost #4 or #5 in a ring for her which she desires.

If the French can credit themselves with streamlining all emotional turbulence out of courtship, the British must stand accused of making a public mockery of it. The Victorians didn't have to de-sex the holiday to
suit their century, it had long before neutered itself.

Still they tried, generally by composing insipid verse. Plagiarism already had a tradition among eligible bachelors who, dimly aware that love was the order of the day, hadn't the social grace to feign it on their own. By 1700, publishers had found as strong a market for love poems meant to be copied as for those meant to be read. The verse contained within tomes such as "The Complete British Valentine Writer," sold on Fleet Street no less,
as "A complete Set of LETTERS, VALENTINES, &c.
Proper for almost every TRADE in Town or Country, with their Answers," was intended to be cribbed onto hand-drawn cards, but, what with everyone using the same sources, it can hardly have seemed worth the bother.

Which explains why printers, first in England and later America, started manufacturing cards wholesale. The postmaster dreaded the coming of February, and fretted about obscenity. Judging from the prosody, he was
right to worry, even if the only real offense of such spayed doggerel was aesthetic:

Could such a fate as this be mine,

'Twould be a glimpse of love divine,

And never should I seek to gain

At least love then, however falsely, claimed divinity. Today Cupid has given way to Snoopy. At Walgreen's, Charlie Brown and Lucy also romance the card rack, where categories include not only NEW LOVE and HUSBAND, but also GRANDFATHER and DAUGHTER. There are valentines to be given out in school as well, boxes containing enough cards for the whole class, often
with a special one for the teacher, featuring Pokimon, Barney, even Teenage Mutant Ninja Turtles. Still, these seem sophisticated when compared to the baby colors of those candy hearts: Blue for a boy and pink for a girl. How
sweet.

Then again, as Valentine's Day, ever juvenile, regresses all the way to nursery school, why shouldn't children's candy, sweet and chalky as medicine, be our placebo of choice? Even as they say so little, those candy hearts tell too much: Love is simply a first step to progeny, passion
merely a trick of genetics, the whole of courtship an elaborate staging for the money shot. With those cards we buy our children to give their classmates -- even the fat kid, the ugly girl and the boy who wets his
bed -- we start them early down the road toward insincerity, but when we give those candy hearts to each other, we wind up being too honest by half about
the human condition.

So, what remains of romance this Valentine's Day? Those candy hearts, with their two-word prescriptions, provide as accurate a diagnosis as any. There's BE MINE, of course, although it's not nearly so common anymore as the telecommunications series, which includes CALL ME, PAGE ME, FAX ME, EMAIL ME and 1800 CUPID. Even those candies that don't conspire to put untold circuitry and fiber-optic cable between prospective lovers are
noncommittal (HOW NICE), or uncompromising (MY WAY).

Eat the entire bag (candy hearts are fat-free), and eventually you digest, in a Beckett does "Sleepless in Seattle" kind of way, the whole of Valentine's Day's romantic potential:

Best to buy a packet of Rolaids, treat the heartburn and call it a night. Best to save love for a more amiable day.