Smooching with a loved one may be good for your health. 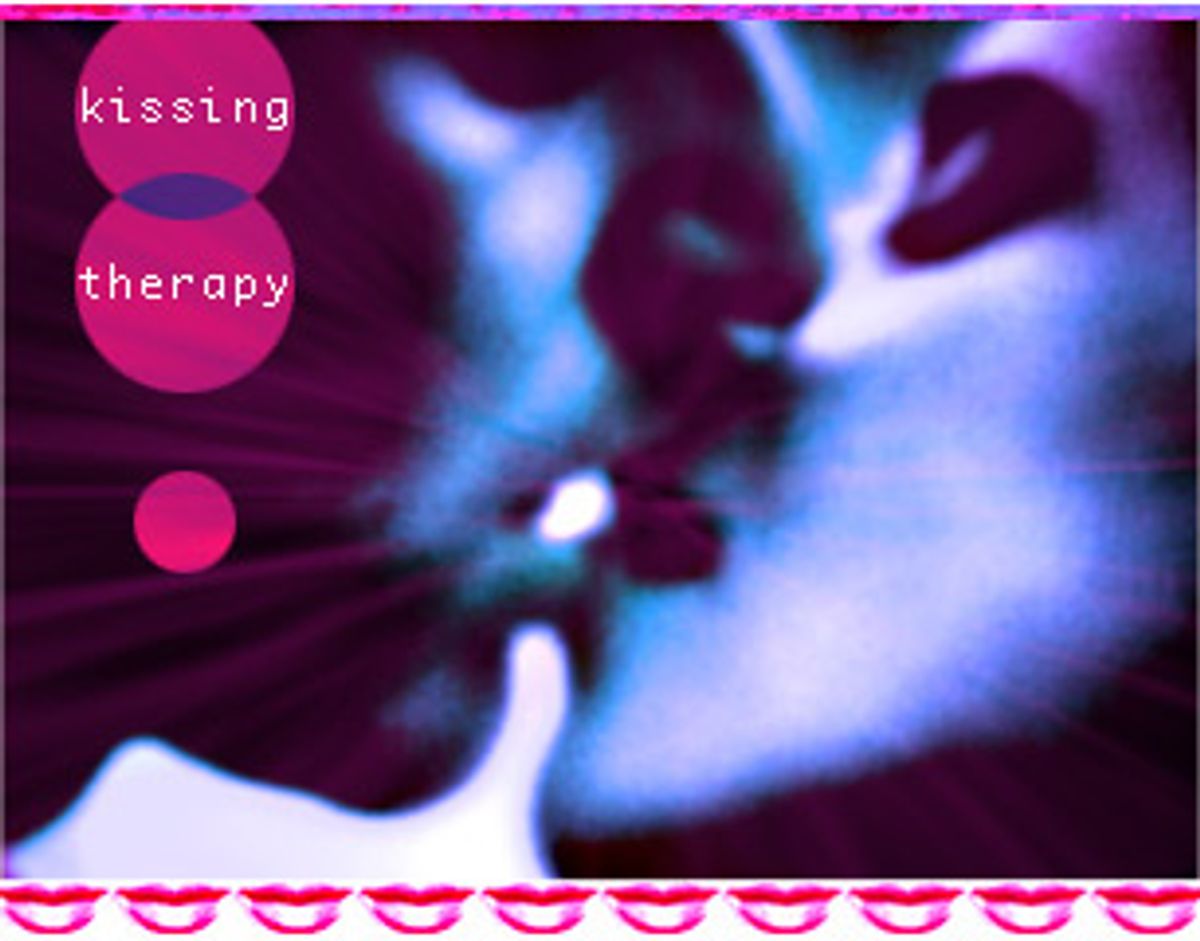 "Sweet Helen, make me immortal with a kiss!"
-- Doctor Faustus

Consider the case of Melissa, a 32-year-old news writer in Washington, who, after 10 mind-numbing years on the job, had a serious bout of malaise, felt that life had passed her by, decided to quit the damn job and cash out her savings, and went solo vagabonding in the wilds of South America.

One balmy night on the deck of a boat cruising off the coast of Ecuador, she found herself enveloped in the arms of the boat's swashbuckling captain. They kissed -- deeply, passionately. She experienced a sense of absolute liberation, a thrill of letting go. She felt flooded with life-giving energy. Her world, to put it simply, was rocked.

Melissa's cathartic kiss definitely made her feel better, and it might even have been good for her health.

Adrianne Blue's 1997 book "On Kissing" outlines the physiology behind the fireworks. Kissing is a highly orchestrated maneuver. You lean in, tilt your head to avoid a nose collision, and the muscles in your shoulder, neck and back are called into play as the brain's motor center gears itself to the delicate task of steering the lips and tongue. Your lips are loaded with nerve endings, and as your mouth meets your partner's, impulses fire through your neural network. Your brain tells your lungs to work harder, your heart to beat faster, your salivary glands to pump moisture into your mouth. Your jaw, the one movable bone in the human skull, hinges open as you extend your tongue.

Then, as tongues touch, neural signals go zipping along your spine, to your pancreas, your adrenal glands and pelvic nerve. Your arteries and veins dilate -- your heart rate shoots up, maybe doubles. Your lips swell, and you get that pleasant tingling sensation in your private parts. The blood rushing to your skin's surface makes you feel fevered, your face flushed. You may begin to sweat.

This ritual is what anthropologists call pre-copulatory activity, what sex manuals call foreplay and what Marvin Gaye calls getting it on. And getting it on is good for your health. In his book "Superimmunity," Dr. Paul Pearsall says that sex in the context of a loving relationship boosts chemicals in your body that protect against disease. Doctors believe that physical touch itself boosts levels of the hormone oxytocin. Among other things, oxytocin boosts feelings of affection and promotes caretaking behavior, and synthetic oxytocin has been used to treat depression.

From an aerobic standpoint, kissing is a workout: According to the 1991 Kinsey Institute New Report on Sex, a passionate kiss burns 6.4 calories per minute. (This compares to 11.2 calories per minute you burn jogging on a treadmill.) It takes only two muscles to purse your lips into a simple pucker, but a serious French kiss activates all 34 of your facial muscles, and the highest level of serious making out, properly done, engages every muscle and tendon in your body.

Kissing can slow the aging process -- it tones your jaw and cheek muscles, reducing sagging. Kissing is good for your teeth -- your mouth waters when you kiss and all that saliva destroys plaque, preventing tooth decay.

Beyond the health benefits of the sexual kiss, the therapeutic power of a Platonic or familial kiss -- its healing magic -- can be traced to the accident-prone days of childhood. When you fell down and skinned your knee, when you pinched your fingers in the door jamb, when some schoolyard blooper launched you into a new realm of pain and humiliation -- when you hurt yourself as a child, what did your mother do? She kissed the hurt away.

The chaste, nurturing kisses between parent and child build lifelong trust. "Kissing the pain away creates an emotional tie between mother and child that eases the suffering," says Dr. Hyman Tolmas, clinical professor of pediatrics emeritus at Tulane University School of Medicine. "It's better than medication at times. Everybody wants to be loved. It builds self-esteem." He believes that children who have parental love demonstrated to them early on "grow up to be good parents themselves."

Dr. Seth Prosterman, a clinical sexologist in San Francisco, agrees: "The displays of affection that parents do in front of their children are important as modeling. Family hugs, kisses -- it's all part of the nurturing that makes you feel secure." And between romantic adults, says Prosterman, "Kissing is powerful in many different ways. A kiss can be healing, nurturing, bonding. All those psychological benefits translate into feeling healthier physically."

According to Helen Friedman, a clinical psychologist in St. Louis, frequent kissing can lead to holistic healing. "The social support of a kiss is a buffer against stress -- pain, too," she says. "This showing of affection is a way to bond. And the need for human bonding is as basic as the need for food."

That's a uniquely fitting metaphor -- the kiss as soul food -- because anthropologists believe the custom of kissing originated in humans when cave-dwelling mothers would transfer food from their own mouths to their babies' mouths, like birds, and adults learned to mimic the act.

From that Stone Age start, the kiss has evolved into a zillion modern variations and crossbreeds. Now we have the Platonic peck on the cheek, the steadfast lip-lock, the probing French kiss, the Hollywood air-kiss, the blown kiss that flies from the palm of your hand to its destination across the breezy abyss and the vacuum kiss that, according to William Cane's 1998 book "The Art of Kissing," is performed by "sucking the air out of your partner's mouth and lungs." Sounds a little hazardous, but Cane says, "All the best kisses make you lose your head and cause a visceral reaction."

Charles Darwin saw kissing as natural -- he claimed that we all have an innate desire to smack lips with our loved ones. According to Helen E. Fisher's 1992 book "Anatomy of Love," 90 percent of people worldwide practice kissing in some form, and 85 percent of Americans polled in a survey by the Revlon company said passionate kissing is the most sensual activity around. "The Kama Sutra of Vatsyayana," that old bedside standard for innovative lovemakers, devotes an entire chapter to kissing, including the sweet notion of expressing your romantic intentions by kissing your lover's reflection in a mirror -- metakissing for the postmodern smooch deconstructionist.

In fairy tales, a well-timed kiss can turn a frog into a prince, jolt Sleeping Beauty out of a prolonged coma and cure a witch of chronic ugliness. In ancient Rome, custom had it that a kiss from your lover before you die would preserve your soul and keep it alive forever on your lover's lips.

A kiss is good medicine for most of humanity's lesser ailments, and sometimes it can be something more -- an instrument of deliverance. Think of Melissa the unhappy news writer, overworked, understimulated, bored to tears with the status quo, burned out on everything. Now see her on the deck of that sailboat at midnight, cruising the Galapagos, locked in a lingering kiss with the seriously swarthy gentleman. The sea glows. The constellations pinwheel across the sky. The kiss goes on and on. Nothing else matters.

"I felt transported," Melissa says. "I felt totally removed from everything I'd left behind. It allowed me to shed all those layers of unhappiness and dreariness. I had a feeling of security and confidence. I knew everything was going to be all right after that. I felt free to do anything."