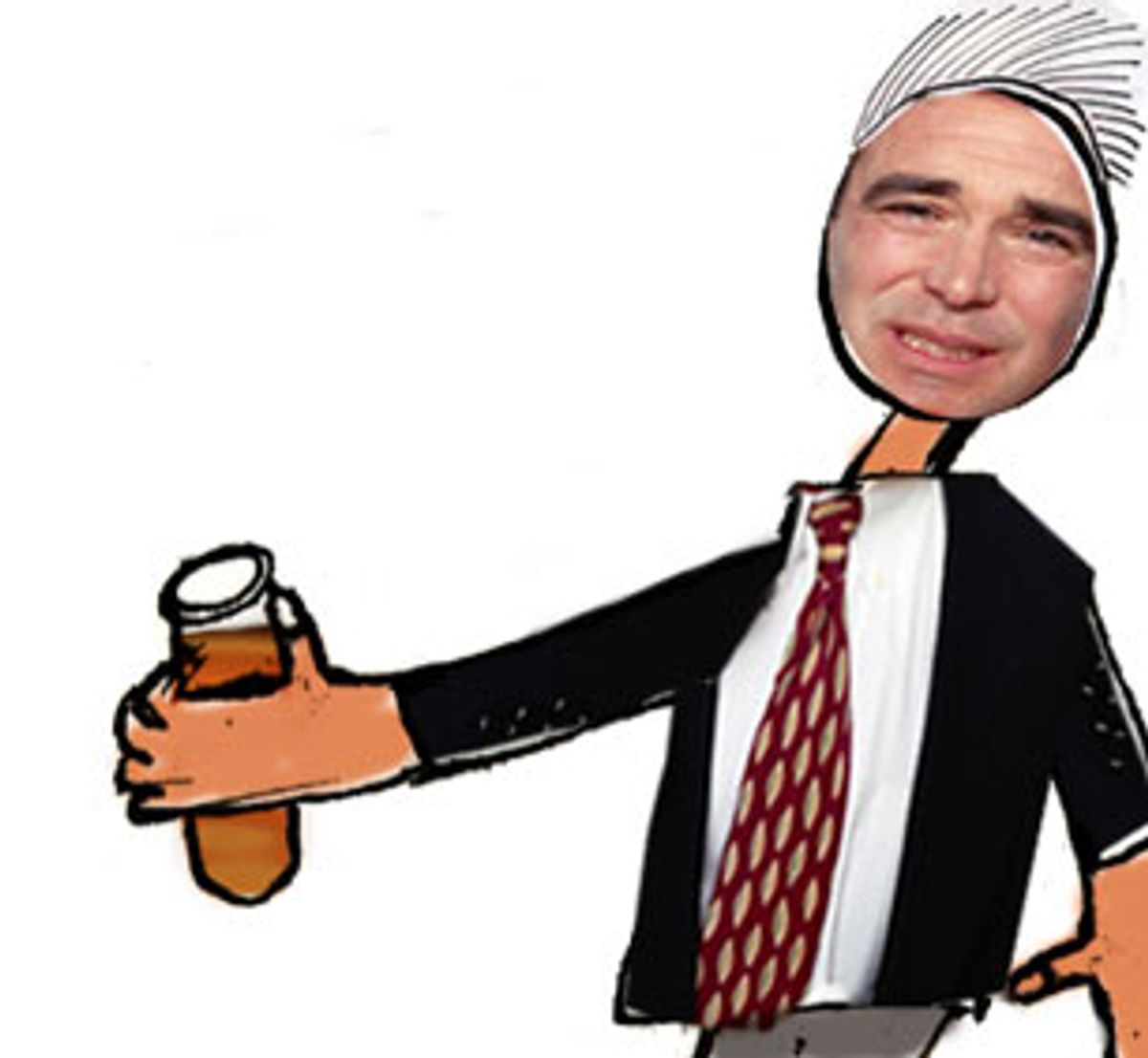 Like a worn inner tube filled with too much compressed air, my bladder felt as if it was
going to burst. I was the Hoover Dam after an apocalyptic
rain, the atomic bomb descending upon Hiroshima. Still, I held the explosion in
check as our inbound aircraft eased toward the arrival gate and a jet bridge
rolled forward to greet us.

Most passengers in this state of urinary trepidation would already have sprinted
to the lavatory. They would have ignored pleas from flight attendants asking
that they remain seated until the airplane came to a complete stop and the
seat belt sign flicked off. But I wasn't a passenger. I was on the job,
sitting in a flight attendant jump seat, lips pursed, thighs crossed, trying
to stem a mounting urge to purge. And though I longed for the friendly
confines of an airplane lavatory -- to hear the rush of digested Coca-Cola
ricocheting off the metal splash plate, the reassuring whoosh of a
mechanized flush and the sigh of my own blessed relief -- I refused to
evacuate the contents of my bladder until the threat of a drug test had
passed.

Flight attendants are subject to random drug tests at the completion of
every trip sequence. Mandated by the Federal Aviation Administration and implemented
by every U.S.
airline, such tests are designed to protect the flying public from druggie
cabin crew members who, under the influence of narcotics, might mistakenly
deliver a chicken entree when the passenger asked for beef. That's fair
enough. But when an arriving crew member is asked to provide a urine sample
and the well happens to have run dry, the employee is forced to sit in an
airport medical facility -- ingesting liquids, dreaming about torrential
floods and waterfalls -- until the well is replenished and an appropriate
amount of piss can be extracted for analysis.

As the passengers filed through the aircraft door on this particular day, I
listened for, but did not hear, the "flight attendants all clear" P.A. This
announcement, though frowned upon by airline management, is occasionally
delivered by a benevolent purser. Once the airplane door has opened and the
purser realizes there is no supervisor waiting to nab a potentially
drug-crazed crew member, the announcement is made -- hardly
raising the eyebrows of deplaning passengers. Immediately after hearing this
signal, flight attendants disappear into lavatories like audience volunteers
in a magic act. But this time, there was no such announcement. As I crept
toward the exit door, my bladder on fire, my crew bag rolling behind me like
an obedient pet, I noticed a supervisor with a clipboard. She was standing
on the lip of the jet bridge, trading whispers with the purser. As I wheeled
around the corner they both turned to look at me.

"Sorry," said the purser, wearing a look that said I'm glad it's you and not
me. "They got you."

I followed the supervisor down the jet bridge, up an escalator, into a
concourse, along a moving walkway, through the immigration checkpoint, down an
escalator, past a gauntlet of customs officials, through a set of
automatic doors, up another escalator, into another concourse, through an
unmarked door, down one of those dingy airport corridors that passengers
never see, and then stepped into the company medical facility. There, while
facing the unsmiling face of a health care professional, I was given a
plastic cup and told to get down to business.

In the bored stentorian voice of a prison guard addressing a new inmate, the
health care professional (we'll call her Nurse Nancy) told me that a proper
level of urine was necessary to achieve adequate test results. If I
failed to fill the cup to a mark approximately two-thirds up, the sample
would be negated and I would be banished to a chair, watched like a
pedophile at a grade-school playground and told to drink, drink, drink until
my bladder swelled and a more appropriate level of urine could be extracted. I've heard
horror stories about employees forced to wait for hours because
their internal plumbing failed to produce.

Providing an adequate sample was
not going to be a problem for me, however. Hell, I almost peed in my
poly-wool uniform pants while trekking from the airplane to the medical
facility. In my condition, I could have filled two plastic cups and then
watered the office plants for good measure. Just give me the goddamned plastic
cup, I thought to myself, and tell me where I can go to deliver the flood in
private.

The bathroom was not a functional one; it was a "pee in the cup only" type of
facility. The tiny cell had a bright fluorescent light that bounced
off the white walls like sunlight off mirrors. There was no running water in
the sink; the toilet bowl held about two cups of strangely colored liquid.
Later, Nurse Nancy told me that this was to prevent less scrupulous
employees from diluting their urine with water -- water that could help mask
cocaine and marijuana and ecstasy and a long list of drugs we might be
tempted to ingest before putting on our uniform and driving to the airport
for a typical three-day trip. In one of those paranoid moments that we are
prepared for by too many "X-Files" episodes and not enough common sense, I felt as if I was being watched. I unzipped my pants anyway, heckled by the
ghosts of those who'd aimed and missed before me.

Once the cup was filled, I yelled through the door, asking Nurse Nancy for
six or seven more plastic containers. The joke fell upon humorless ears. Hearing no
response, I snapped the lid onto the container and carried
it from the bathroom in one outstretched hand as if it were a vial of
nitroglycerin. Nurse Nancy threw me a disdainful look. She double-sealed
the container, placed it inside one-half of a plastic foam mold, covered that
half with the other half, wrapped both halves together using a mummylike
application of "caution" tape, put the taped mold in a box and put the box
in a file cabinet filled with other samples to be picked up by a
Federal Express courier later that night.

The following day, a different Fed Ex courier delivered hundreds of plastic foam
containers (a collection of samples from airline crew bases across the
country) to a secret pee-processing lab somewhere in Nebraska or South
Dakota or some equally underpopulated state where a toxic urine spill would
cause minimal casualties. Gallons of liquid were analyzed and reanalyzed,
the medical technicians testing each sample as if they were forensic
pathologists at the onset of a murder trial. My stuff tested negative, thank
God. But many days later, one of my colleagues wasn't so lucky.

With a level of efficiency almost unheard of when addressing customer
complaints or employee labor issues, the airline anti-drug machinery sprang
into action. A base manager was informed of tainted piss. The information
was relayed to a supervisor. An employee file was opened and meticulously
reviewed. The suspect -- a 5-foot-3, 90-pound Delta Airlines flight attendant
without so much as a fart on her record -- had not tested positive, however.
She was accused of providing a "diluted" urine sample, the result, she
said, of drinking prodigious amounts of bottled water on her inbound
flight.

I watched the television screen as this diminutive Japanese-American flight
attendant told her story to a Portland, Ore., news anchor. "I come from very strict
Japanese family," she said in hesitant English. "I've never even seen
drugs." She went on to describe her habit of drinking water, lots of
water, whenever she flies. It keeps her from being dehydrated during long
hauls to and from Japan. She talked about how Delta terminated her because
her urine was "tainted" with water, about how the company refused to grant
her a second test, even refused to accept the findings of an independent drug
test she took the next day. Her own supervisor -- aware of the
employee's seven years of perfect attendance and all the passenger
commendation letters -- burst into tears after being forced to dispense the
horrific news.

Looking at her tiny 90-pound frame, it was easy to see how even a small
amount of water could dilute her urine sample. What I could not see,
however, was how a major airline like Delta failed to admit that it
had probably made a mistake.

Evian abuse. Apparently it's nothing to piss at.