The way we clean now

Is "Home Comforts," the new bestseller on housecleaning, an essential reference work or a scary sign of anti-feminist backlash? 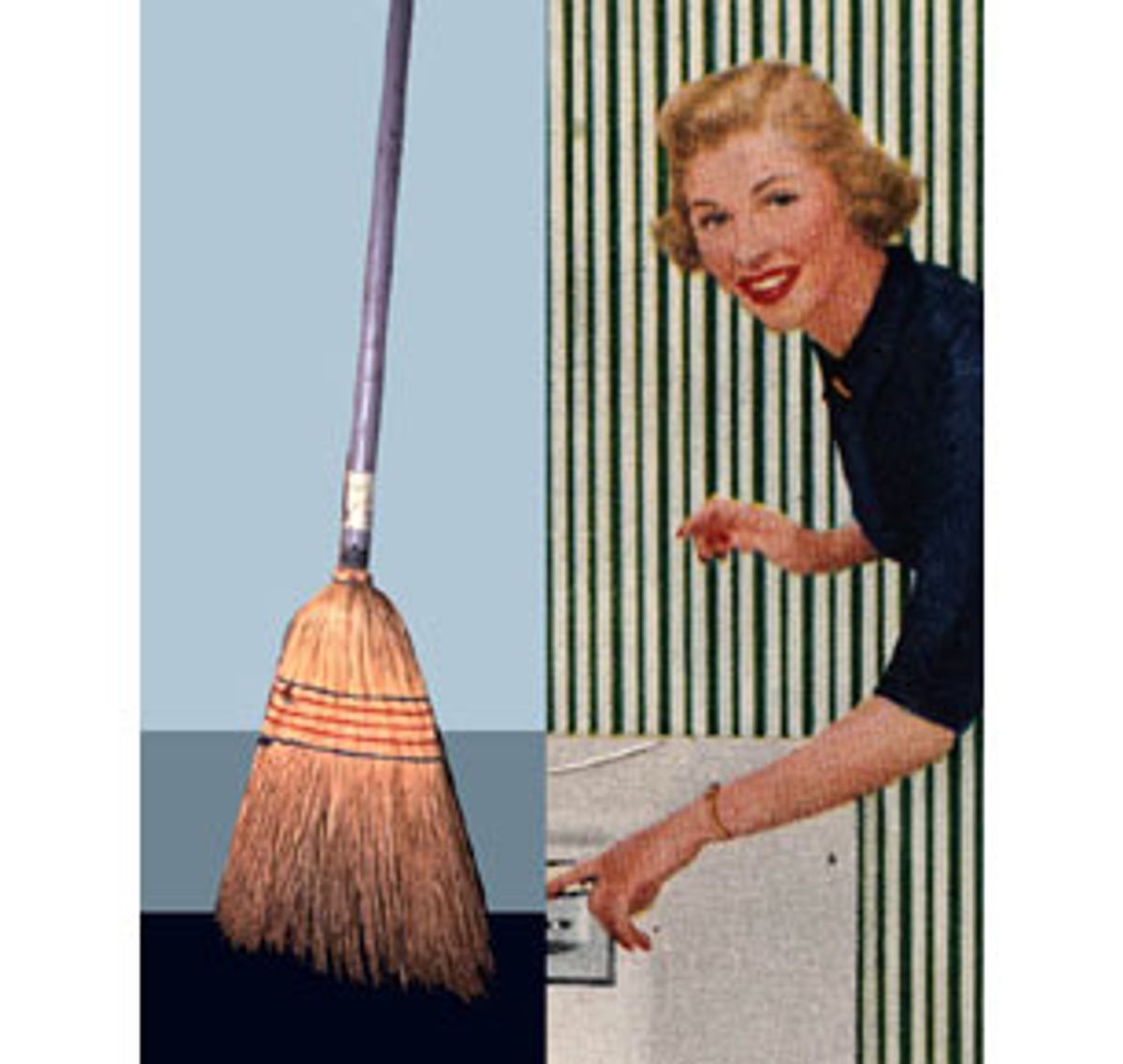 On a dreary winter evening, I love to curl up with a juicy domestic tome. Not a glossy photographic guide to some exasperating household art like flower arranging or a chemical-heavy treatise on furniture refinishing. I like big, housewifely volumes that tell you how to can your own preserves and starch a shirt.

I have no intention of doing either of those things myself as long as supermarkets and dry cleaners are around. But I might easily want a recipe for apple pie or a method for removing the blob of red wax from my dining room table (without removing the varnish too, as a household-hintless friend of mine did). Or I might just want to contemplate the vast, humbling but oddly comforting care, thrift and ingenuity that have been expended for centuries on the daily upkeep of life -- mostly by women, laboring for love, money or survival.

While bookstores abound in cookery classics -- the recently revised "Joy of Cooking," for example -- good household help is always hard to find. In fact, reading about housework can be much duller than doing it. I once, for example, had to copy-edit a book called "How to Remove Spots and Stains," an experience from which I developed a rule of my own: Dry-clean it or throw it out. At the other end of the comprehensiveness spectrum, Oxford University Press is shortly to reissue the 19th century English classic "Mrs. Beeton's Book of Household Management." But while I can't wait to browse this behemoth (the 1880 edition in Yale's library runs to 1,296 pages), I suspect that it won't offer much practical help with daily life in the 21st century.

The fact is, housekeeping has an image problem. It's essentially a backstage production, more noticeable in its lapses (the pink-tinged bathroom tile, the sticky kitchen floor) than in its successes (the measure of which, in my apartment, is getting up from the couch without looking as though you're modeling the latest trend in fur -- cat). Its equipment is low-tech -- brooms, mops, sponges -- and it lacks the glamour of related activities, like decorating and entertaining, that involve acquisition and display.

Because of a fusion of trends, most of them originating in California -- Alice Waters, sun-dried tomatoes, Williams-Sonoma -- the daily necessity known as cooking got repackaged in the 1980s as "cuisine." But despite Miele vacuum cleaners, Restoration Hardware and the hysterical home craft of Martha Stewart, actual housecleaning -- the unglamorous, interminable battle with dirt and disorder -- has never quite made it as a yuppie pastime. Just compare the sleek look and layout of dicor magazines (Better Homes and Gardens, Metropolitan Home) or culinary magazines (Food & Wine, Saveur) with the print-heavy dowdiness of homemaking magazines (Good Housekeeping, the Ladies' Home Journal).

The one book of housekeeping hints I do own bears a revealing title: "The I Hate to Housekeep Book." How reassuring author Peg Bracken's humorous resistance must have seemed in 1962, at the end of the domesticity-mad 1950s: The housewife should not feel obliged to iron her husband's handkerchiefs, darn the family's socks, scrub their collars, polish the furniture. One heretical lady of her acquaintance even goes so far as not waxing her kitchen floor, although Bracken stops short of recommending such neglect. Bracken, in fact, didn't hate housework nearly as much as Betty Friedan, who just a year later (in "The Feminine Mystique") declared that it was driving women mad. Abandoning the Mop & Glo no longer seemed nearly revolutionary enough, and the market for homemaking hints has been slow ever since.

Now a sometime lawyer and philosophy professor and her editor at Scribner have gambled that the time has come for a housekeeping revival, purged of its association with the old-fashioned housewife. They appear to be on to something. Cheryl Mendelson's 800-page-plus "Home Comforts" has shipped 160,000 copies since November and held on as an amazon.com Hot 100 and a barnesandnoble.com Top 100 seller, as well as a Book-of-the-Month Club alternate selection -- a breakout performance for a book whose 72 chapters include "Sanitizing the Laundry" and "Vacuuming, Sweeping, and Dusting."

Is "Home Comforts," as Katha Pollitt charged in the Jan. 24 issue of the Nation, an example of anti-feminist backlash designed to inspire guilt in women who regard housekeeping as a chore rather than, as Mendelson's subtitle has it, an "art" and a "science"? Is it, like the Miracle bra, a turn-of-the-century repackaging of midcentury femininity? Or, with its coverage of abstruse topics such as "Legal Protections Against Governmental Intrusions on Your Privacy"; its illustrated descriptions, addressed to the novice, of how to sew on a button, set a table and iron a shirt; and its determined gender neutrality (the book features housework but no housewives), is it a much-needed resource for the modern home?

Actually, it's both. Two books compete for dominance in "Home Comforts." One draws on the least appealing traditions of home economics: prissy moralizing and scary science. The other is a contemporary compendium of information that's useful, curious or entertaining -- material for several weeks' worth of dreary winter nights.

In home-economics mode, Mendelson strives for breezy pragmatism, but a nostalgia for domestic dedication leaks through. Sheets needn't be ironed, she concedes -- but how good they feel when they are! She can't resist telling us that the best way to clean bare floors is on hands and knees, although she realizes that her reader is unlikely to adopt this position. Delicate line drawings (by Harry Bates) illustrate the proper way to fold underwear, lay a formal place setting, hang laundry on an outdoor line and accomplish a number of other tasks most readers are likely to perform according to common sense or not at all. In this mode, too, Mendelson's didacticism occasionally runs right away with her. I can't imagine even a novice reader requiring the information that "milk in coffee or tea renders the drink less bitter; sugar makes it sweet."

More annoying, though, is Mendelson's insistence on the moral significance of housework, which in her first chapter she extols as offering "the increasingly rare freedom to engage in worthwhile, unalienated, honorable work." Now, I enjoy my few hours of Sunday afternoon cleaning. Sparkling tile often gives me as much satisfaction as a shapely paragraph. I feel the same smug superiority to people who never clean their own floors that subway-riding New Yorkers feel to their taxi-dependent friends: the superiority of real folk -- in there, getting our hands dirty -- to the effete, white-gloved bourgeoisie.

But like most smug attitudes, this one won't stand scrutiny. The fact is, I clean at whim, with only my own comfort to consult: If deadlines press, then the tile just won't sparkle this week. If I were housekeeping under duress, if someone else were judging my domestic performance, if children or spouses or housemates were undoing my efforts as fast as I made them, I doubt I'd find the work so soothing.

Indeed, if housekeeping is so fulfilling, you have to wonder why men have historically unloaded it on women, while women have leapt at every opportunity to pay or coerce their less fortunate sisters to do it for them. Mendelson's cheerleading (Look! Housekeeping requires intelligence! Intuition! Skill!) rather closely resembles the arguments used at the turn of the 19th century to discourage women from leaving their homes to work or to vote. Yes, a clean home is nicer and healthier than a dirty or untidy one, but not if keeping it that way means being trapped in it.

Mendelson's hawkish position in the Great American Microbe Wars is also tiresome. Perhaps it's her training as a lawyer, but the kitchen as she describes it in a chapter on "Safe Food" is less the warm center of the home than a scene of potential negligent homicide. According to Mendelson, my small but (I'd always thought) friendly kitchen is really a battleground for toxoplasmosis, E. coli and salmonella -- to name only the most familiar suspects. These microbes multiply in my rare (or even medium) steaks, raw (or even lightly steamed) shellfish, poached eggs and unwashed fruit. (Mendelson's anti-microbial frenzy, by the way, does have the full support of the U.S. Department of Agriculture, on whose killjoy expertise she draws copiously.)

When I reach for my sponge to wash away these contaminants, I merely worsen matters by sending rampaging armies of microbes across counters and cutting boards. Indeed, the sponge itself, which Mendelson appears to regard as a weapon of germ warfare, quivers with so many microorganisms it's amazing it doesn't jump right out of my hand. With my careless kitchen habits and my taste for the rare and the raw, I should by all rights be dead by now, or at least a little fluish. Being unaccountably healthy, however, I'll take my chances and probably continue to swipe at the floor with the sink sponge and wipe my hands on the dish towel.

To be honest, though, I did, after reading Mendelson, go out and purchase 10 new kitchen towels, five (green) for dishes and five (blue) for hands; rearrange several kitchen cupboards; and polish the copper pot that sits (uselessly) on top of the fridge. I like to think I did these things out of inspiration, not guilt. Piles of fresh towels and shiny pots are nice to have around the house. It's not that I don't understand Mendelson's pleasure in cleanliness and order. I just wouldn't elevate it to a principle.

If, however, you take both the philosophizing and the fear of germs with a pinch of salt, another "Home Comforts" emerges: a reference book full of exhaustively researched, clearly presented information. As a home economist, Mendelson is an autocrat -- the word "must" occurs frequently. But the great thing about reference works is that they are essentially democratic. You don't have to read them in any particular order, and you can ignore what you don't need. I may never look at the kitchen chapter again, but the 200-page section titled "Cloth" fascinated me for days. I've learned what Tencel is, how wool keeps you warm and why I needn't covet the expensive, lustrous, high-thread-count sheets featured in bedding catalogs (they don't wear well and they're harder to care for).

And even though I'll probably keep shoving too many clothes in at once and pulling them out wrinkled, I love the drawing -- carefully stippled, shaded and labeled -- of a "properly loaded clothes dryer." In fact, the whole "Laundering" chapter is promising; perhaps it will explain the differences among all those products on the detergent shelf: brighteners, whiteners, washing soda, bleach, bluing  The chapter on the home office (a topic neither Beeton nor Bracken includes) may offer some way out of my present ergonomic distress, and as for the section on the organization of records -- well, I can use all the help I can get.

The fact is, while I don't have the time or the inclination for domestic perfection myself -- and I certainly wouldn't recommend it to anyone as a goal in life -- I don't mind having the instructions for it on hand.