It's the candidate, stupid

Don't blame reporters for putting McCain on the map. Like the senator, they are listening to the people. 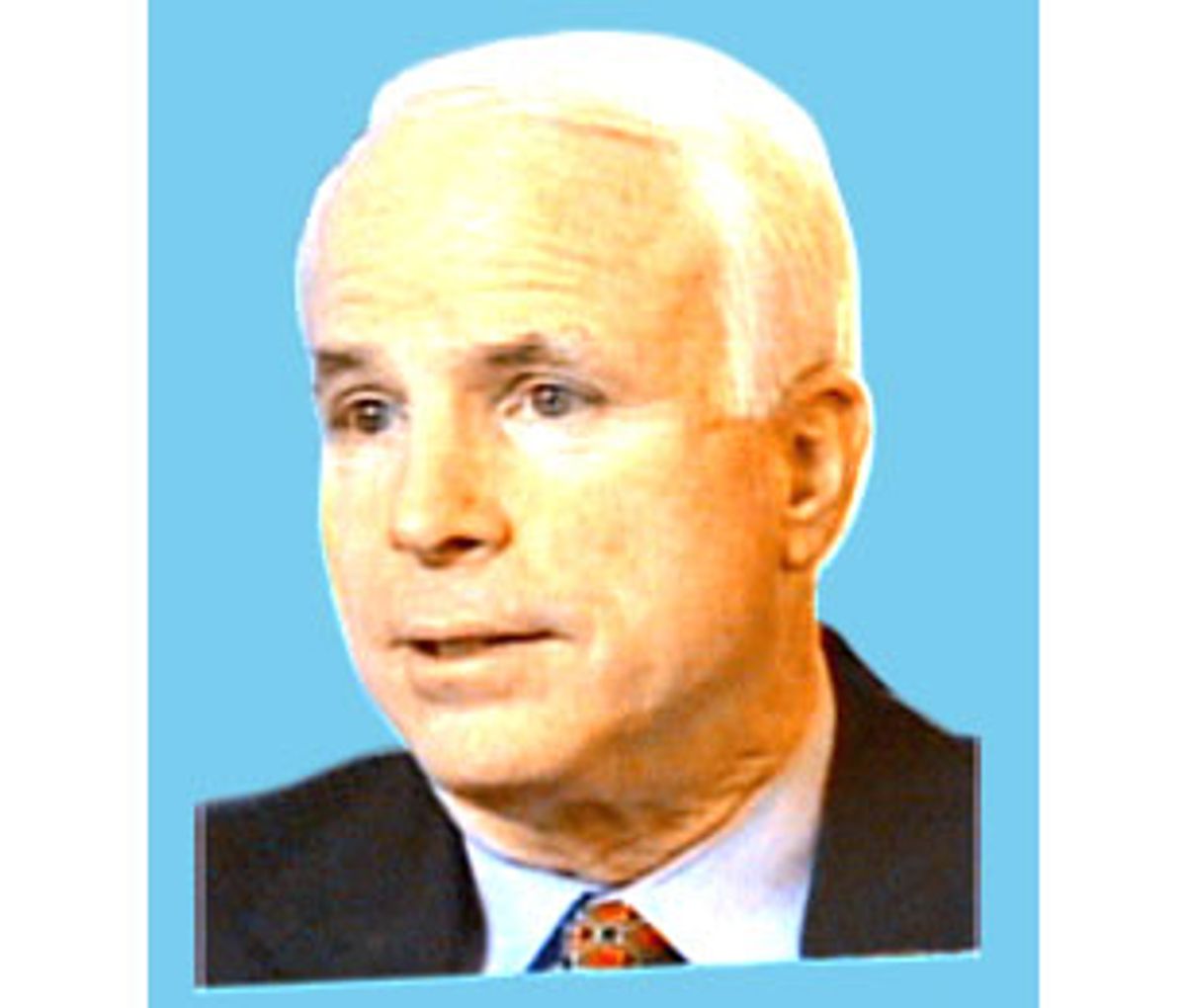 In a rather predictable attempt to explain the McCain phenomenon away, certain media commentators have hit upon a novel, if inaccurate explanation.

It's the media's fault.

That was the theme of CNN's Reliable Sources last weekend, when host Howard Kurtz asked a panel of reporters, "Has the press fallen in love with John McCain?" In an attempt to feel the passion that fuels most press reports, Kurtz rode on the candidate's Straight Talk Express -- and came back with his hair still in place.

With his Washington Post column and his appearances on CNN (not to mention a feature in last month's Talk magazine), Kurtz has become a trusted -- and ubiquitous -- figure in the world of media criticism. When he says something stinks, it's time to open a window. His investigation into the McCain question, however, left him concluding that though reporters tend to like any candidate who gives them lots of access, there was scant evidence that the media was giving the senator a free ride.

(The bad cop role was left, as usual, to Kurtz's more intimidating co-host, Bernard Kalb. "You have surrendered to the massive pandering of the media that McCain inflicts on the media," Kalb told Newsweek's Michael Isikoff at one point, while scaring everyone else on the panel with his eyebrows.)

Blaming McCain's astounding rise on the media isn't news, however. Political cartoonists have been having fun with a love-struck press for weeks now and members of the Bush camp have been known to point the finger as well. Marvin Bush (evidently the bad brother) was quoted in this week's U.S. News & World Report telling reporters, "That great sucking sound you hear is the sound of media's lips coming off John McCain's --"

(He stopped himself before saying the bad word, naturally. That wouldn't be prudent.)

What gets lost in all this media bashing is the fact that the press following McCain's campaign are not only doing their job -- following the only real comet in the sky right now -- they're giving voters a sense of the man himself. Or at least what the experience of being with the man as he campaigns is like. (Admittedly, that was once considered part of their job, too, though it now seems secondary to racking up a few bons mots in the zeitgeist piece of the week.) As enamored as some reporters may sound, they are reflecting the overwhelming reaction of the electorate that has come out to see McCain stumping in the primaries.

As Nicholas Kristoff noted in a New York Times piece Saturday, "for all the blizzard of commercials and headlines about tax cuts, health policy and abortion, the main issues so far this year are not exactly issues at all, but rather matters of character, leadership and moral stature." Having interviewed voters in South Carolina, New Hampshire, Delaware and Iowa, Kristoff concluded, "This time, character trumps the issues."

Which is not to say that McCain -- or any of the candidates -- can ignore the more substantial questions, and a few handicappers have predicted trouble for him down the road if he doesn't better define his domestic agenda. But as exhaustive (and exhausting) as some of his answers can be, McCain's willingness to talk and talk is very much the story. It's the singer, not the song.

All that access can grow wearying, of course, as several reporters have complained (CBS's Bob Schieffer called it "the unending news conference," others have likened it to being at someone else's therapy session). And on this point even the average citizen can agree; too much McCain could be bad for you. At dinner with some colleagues in Washington last week, the talk was all of McCain.

Back in my hotel room I turned on C-Span and watched the senator shake hands with what seemed to be every veteran and enlisted man in South Carolina ("Thank you for serving, sir," he said to many). Then I turned on Chris Matthews' "Hardball" and watched McCain address an auditorium of college kids. He used the phrase "young people" about a thousand times and even compared himself to Luke Skywalker, trying to fight his way out of the Death Star. (An earlier reference to "Sky King" was lost on these representatives of the "South Park" generation.) Finally I turned to DL Hughley's comedy show on HBO (straight talk of the Redd Foxx variety) just to get away from him.

Which must be just about how George W. Bush feels right now: What's it going to take to get this sucker off my back? It's not likely that McCain is Dubya's worst nightmare; the governor doesn't look the type who has been plagued by many bad dreams in his life. But for a man who, legend has it, wanted to avenge his father's defeat in '92, McCain's challenge must seem like dij` vu of the distinctly bad karma variety. He had been anticipating a problem with the Reform Party (a group that now has all the credibility of the Provisional IRA). Instead he finds himself looking at a real reformer; or at least a guy who talks like one.

Candidate George W. Bush's gravy train began with one simple fact: He wasn't Clinton. He was a popular governor, son of a once popular president. He cut a good figure and didn't seem to have any major flies on him. He wore cowboy boots with his suit.

But soon it appeared that other people weren't Clinton, either. In fact, when you stack them up next to each other, McCain is a lot less like Clinton than Bush. And as Rep. Lindsey Graham (who has been playing Virgil to McCain's Dante in the inferno of South Carolina politics) says on the stump, "I've got the antidote to Clinton fatigue right here, folks."

And though the existence of "Clinton fatigue" has yet to be proved by research, neither has "chronic fatigue syndrome" -- and that doesn't prevent thousands of people from getting sick with it. The nostrum that Graham and McCain's widening circle of supporters are hawking is more than a Clinton antidote. It's an integrity elixir, a credibility potion. It seems to be one that no one knew they needed until they heard about it. And historical candidacies sometimes arise from a need that had previously remained unarticulated.

Boomers remain a key demographic. They elected Clinton in '92 and Clinton (if you believed the hype) was the boomer president who was going to bring it all home -- heal the divisions left by the Vietnam War, bring together the sides polarized during the Days of Rage. But unctuousness proved to be a lousy salve and boomers like me reacted with despair as we realized we had not elected Beaver or even Wally Cleaver, but Eddie Haskell.

Bush -- and, for that matter, Gore and Bradley -- don't look all that different from Clinton. If they were colors you'd find them all living pretty close to each other in a big box of Crayolas, each one a lighter shade of blue. Though some pundits have claimed McCain speaks to a different side of the same boomer guilt (he was the one who went to Vietnam), I think his age is part of the secret of his appeal.

At 64, he is a decade older than his opponents. Foundering somewhere between World War II and Vietnam, his was a true lost generation. Though he served in Vietnam (as everyone in the world must know by now), he looked old before he was captured. He "missed" the marijuana phase of the war, he has answered (with typical candor) when asked about past drug use. He falls on the other side of that generational divide; he seems to have been born before the Age of Irony. Jedediah Purdy must love him.

Not to say McCain is without a sense of humor -- in fact, he would do just fine on Letterman. (When asked last week by a South Carolina reporter if he intended to remind voters of his role in the S&L scandals he replied, "Sure, I'll try to bring that up at every opportunity. I'll say, 'Hello dear friends, I'm one of the Keating Five, greetings.'")

But he usually isn't a smart ass and it's hard to imagine him arguing over the definition of sex. (He's had plenty and isn't ashamed to talk about it.) He has milked his own image for all it is worth, but what else can he do? If image equals character and character trumps issues, he may hold the winning hand. Peggy Noonan, who learned a thing or two about image as a speechwriter for Ronald Reagan, wrote a savvy editorial for the Wall Street Journal about McCain's appeal. Using the context of a B-movie, she compared the Republican electorate to the Girl, Bush to the Boss's Son and McCain to the Flyboy.

"He has captured your imagination. This may get serious. He seems such a relief from -- from that other man in your life, George W., the Boss's Son," she wrote. "You've been dating him for a year, and everyone thought marriage was in the cards, but now -- now there's Flyboy. And suddenly you realize one of the biggest reasons you couldn't get serious about the Boss's Son is that your parents wanted you to! Mom and pop -- let's call them 'the Republican establishment' -- kept telling you he's a catch. They kept pushing you, for your own good. Well, heck -- let them marry him!"

Of course, the presidential race isn't a B-movie and conservatives vote on issues, not image -- right? Noonan should know. In the sort of '40s films she alludes to, any number of guys could play the loser left at the altar: Ralph Bellamy, Leslie Howard, even Reagan. But there was only room for one real man -- Bogart, say, or Gable.

So far, McCain's campaign has been much more like a '60s flick than something from the '40s, its been loose, rangy and unpredictable. It's like one of those movies McCain's buddy Warren Beatty starred in ("Bonnie and Clyde," "The Parallax View") in which the good guy gets gunned down in the end, always by the forces of society or the establishment, man. Those rooting for McCain, even in spite of his politics, aren't hoping he loses. For now they're just enjoying the sight of someone who seems to be saying exactly what's on his mind, taking chances and (as Maxwell Smart used to say), loving it. It's the sight of this high-wire act that has the press, and the rest of the country, so fascinated. You don't need a media man to know which way the wind blows.