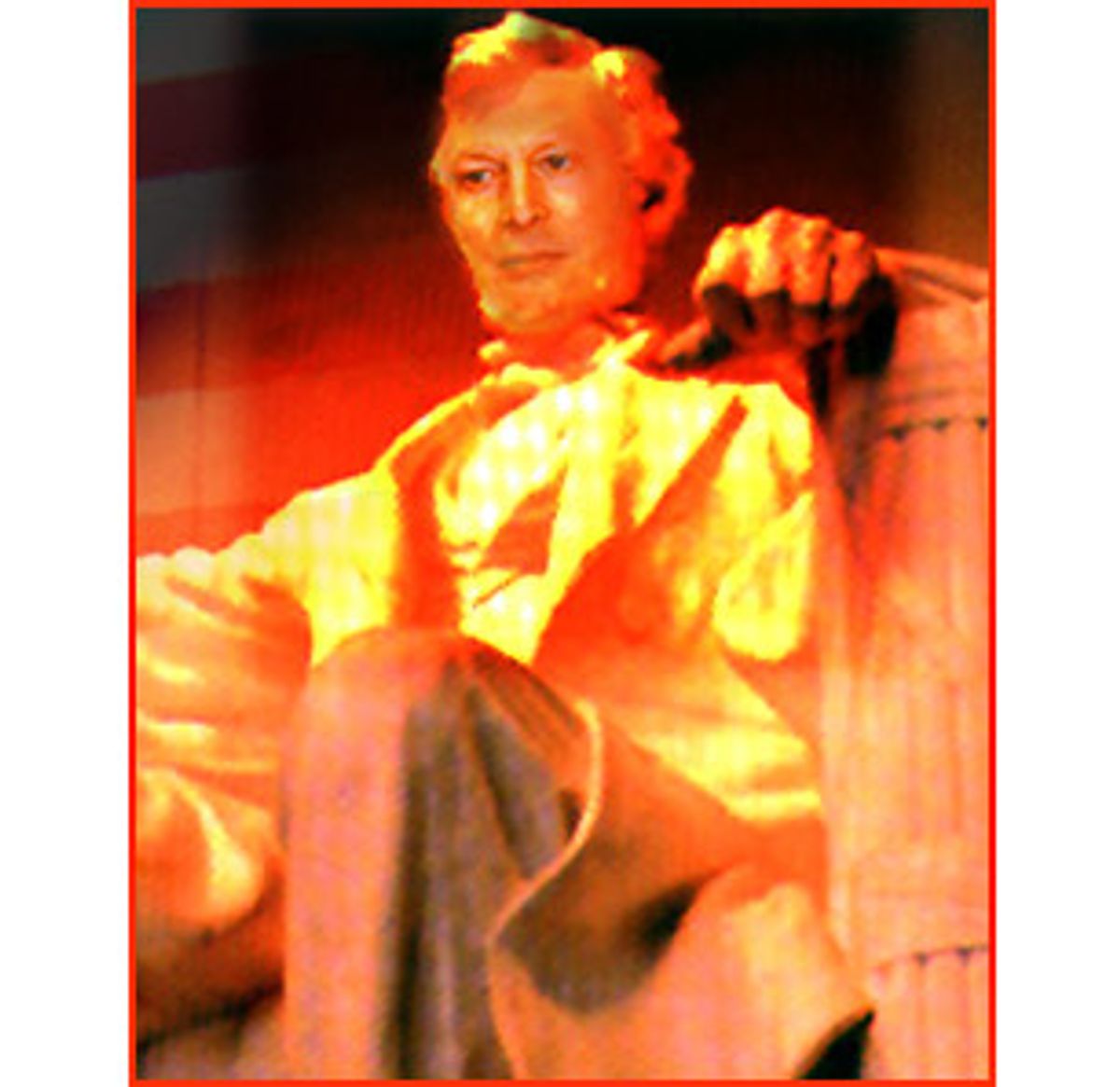 The program notes to the Feb. 7 performance of Aaron Copland's "Lincoln Portrait" at Lincoln Centers Avery Fisher Hall point out that the folk tune "Camptown Races" is quoted in the score because it was one of Abraham Lincoln's favorite songs. Coplands piece, which sets Lincoln's writings to orchestral accompaniment (played here by the American Symphony Orchestra), was narrated during the Avery Fisher performance by Al Gore, who, as you may have heard, is running for president. This makes the "Camptown" moment all the more prescient. For what song, other than "We're in the Money," could a politician love more? It's a song about a horse race, a gamble. And it never sounded more resonant than in this, the primary season. Place your bets, fellow citizens, for just as I might put my money on the bobtail nag, polls show that you have a thing for the bay.

The hall bristled with the kind of energy that only Secret Service agents provide. I couldn't take my eyes off the boxes, which is a natural post-1865 American habit when someone whose title includes the word "president" attends a theater. Easily a third of the audience was there to have some fun at Gore's expense. But there was something quaintly reassuring about the way the crowd clapped -- some even stood -- out of respect for his office, which, lest we forget, is only respect for the electorate and its judgment. Even in cool New York, Americans are not above a little "He's here!" excitement over the vice president, a man who once joked about himself that he is so boring his Secret Service name is Al Gore.

The "Lincoln Portrait" has a long instrumental introduction, which provided ample opportunity to watch Gore wait and wait and wait for his turn to speak. It was like watching the institution of the vice presidency in action. This must be what it's been like for him all these patient years, listening to someone else's noise until it's finally his cue.

Gore, who sat in profile next to conductor Leon Botstein, looked like the head on a coin. Which is to say he never looked more presidential. It's an easy trick to come off dignified while wearing a nice blue suit in front of tuxedo-clad violinists and orating the words of Lincoln. Then again, orating the words of Lincoln is itself a gamble. Who could begin to compare? The music on the stage wasn't coming from the woodwinds. It was coming from the page, from the grave, from the rhythm of "new birth of freedom" and the melody that "we cannot escape history."

Hearing words like that spoken by a presidential candidate was especially striking in the current climate of mind-numbing practicality among the campaigners for the job, who seem to think of the American people as a bunch of penny-pinching misers who are hoarding our precious votes for the candidate who might save us 40 bucks a year on the 1040EZ. I was delighted to take a brief, poetic break from the subject of tax breaks to sit there in Lincoln Center and ask, What is a president supposed to say? What should he sound like?

Should he sound like Lincoln? We think we think so, forgetting that Lincoln's voice was reportedly as squeaky as a 6-year-old girl's. Because of the eloquence of his words, documentary film producers hire narrators with stentorian timbres to deliver the Second Inaugural Address, all the while forgetting that Lincoln himself probably sounded more like David Sedaris than Gregory Peck -- a thing Gore supporters might want to remember considering that the vice president was not born with his boss's oratorical gift. President Clinton was always a better artist than governor, and who knows what he might have stirred within me whispering Lincoln's call for us to "save our country." I would have been seduced by that voice -- yet again.

But just as Clinton appealed to the rock 'n' roller in me, Gore's pencil neck tugs at my nerdy heart. I think the most endearing thing he has ever said can be found in a sentence in his book "Earth in the Balance: Ecology and the Human Spirit." In it, he asks, "What happened to the climate in Yucatan around 950?" Something about the specifics of that query lit me up. For the first time, I could see casting my ballot for a man who would pose such a question. It was just so boldly arcane. The kind of mind that would wonder about temperature variations on a Caribbean peninsula a thousand years ago suggests that its owner has the stomach to look into any number of Americans' peculiar concerns. Paradoxically, this fervor for scientific facts -- the thing that supposedly alienates him from voters because they see him as cold -- requires no small amount of passion. You don't write a 400-page book about ecology unless you have the heart.

Maybe it was the Yucatan Gore who came to life at the end of "Lincoln Portrait." The piece ends grandly with the conclusion of the Gettysburg Address. Lincoln hoped "that these dead shall not have died in vain; that this nation, under God, shall have a new birth of freedom; and that government of the people, by the people, for the people, shall not perish from the Earth." At that last word "Earth," I did not think of Lincoln or Copland or you or me. I thought of Gore, because he owns that word more than any of us, and should trademark it, earn dividends and rewards. For what other candidate has thought more, read more, written more about the issue of whether we will have an Earth not to perish from?

After that he sang along with the New York City Gay Men's Chorus in the "Battle Hymn of the Republic" and during the stirring quiet parts the rest of us exercised our greatest concert-hall freedom: the freedom to cough.