My daughters are part me and part their father. The evidence is in their springy, curly, ready-to-dread hair. 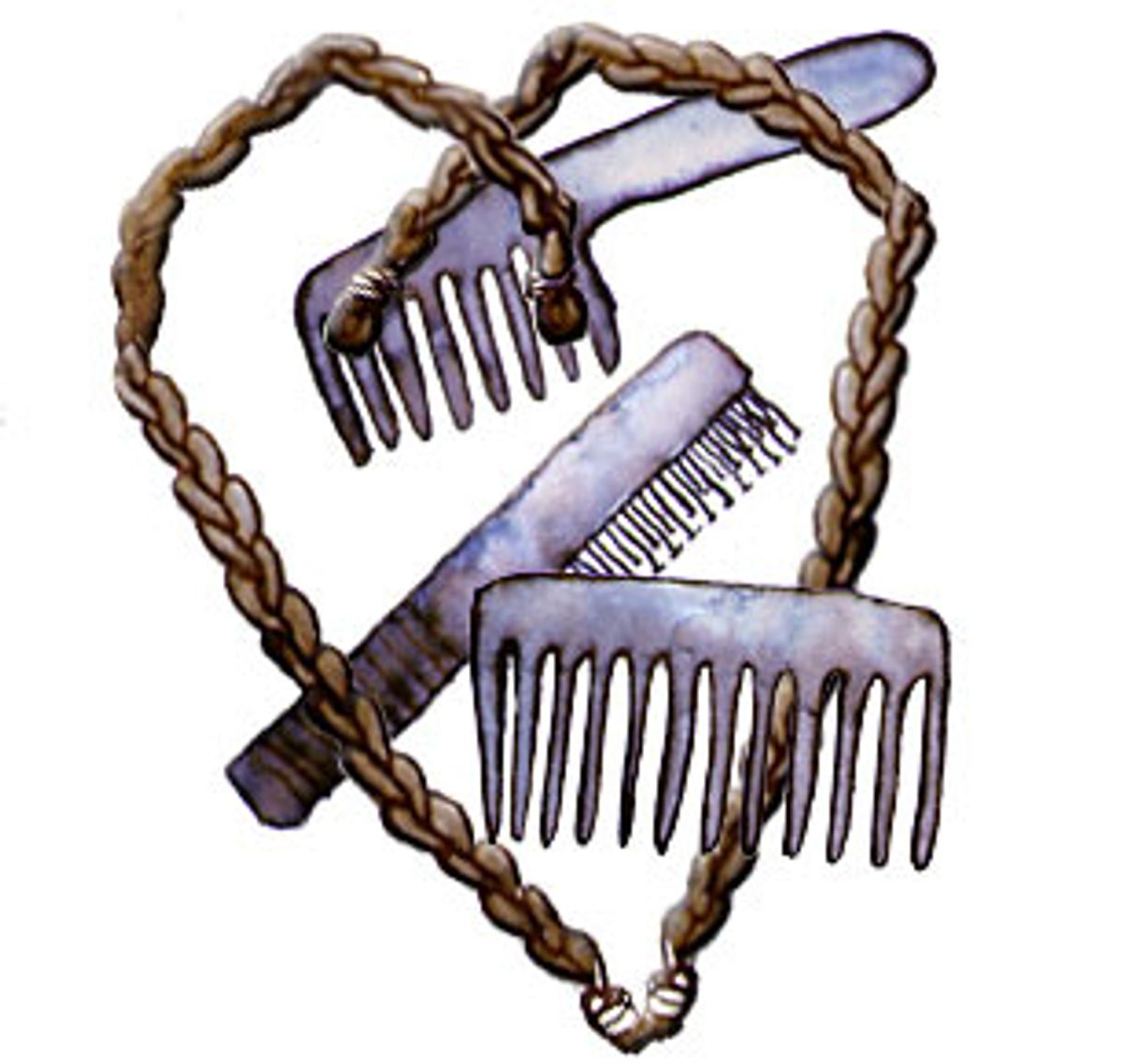 On Friday afternoons when other people my age mention their evening plans, I have an unwavering commitment that sounds like an excuse. Mine is not "I have to wash my hair," but, "I have to do my girls' hair."

I spend Friday nights on a cracked leather loveseat combing out three damp heads springing with waist-length, freshly conditioned spiral curls. While we watch vapid teenage television shows, I spray detangler and separate trying-to-dread locks and then braid the long hair for the night.

I take my daughters' hair very seriously. They are part me -- Swiss and French-American -- and part their father -- Creek, African and Irish-American. They are women of color, girls with burnished gold skin and black eyebrows. In our family, and in the black community where much of our family has lived, the care and maintenance of hair means more than just barrettes and ponytails; hair reflects pride and care, and neglected heads display a serious lack of mother's love.

I'm just grateful for conditioner. I recall pain from my childhood, when my mother combed my waist-length straight blond hair without creme rinse, which she'd never heard of. Let me put it this way: My bathroom looks like a salon sometimes, with frizz-ease, shampoo and leave-in spray.

During "Sabrina, the Teenage Witch," I comb through my oldest daughter Gaila's hair. Hers is longest, of course, but also merely wavy when compared to the tighter curls of her sisters. However, after a long week of sports and sleeping, her kitchen needs work.

Most white women do not know this kitchen, the snarls at the nape of the neck. Many white women I know express shock that I spend this much time on my girls' hair. "I don't even think I technically washed my kids' hair until they were 4," someone once told me. Her children had wispy blond feathers that she just tousled with a washcloth. "Mine won't let me touch their hair," someone else said, and I studied the straight locks pulled back in a ponytail.

It is true that in the morning, the choices of hairstyle for my girls are endless, and we have to set aside some time if they want something special like a bun or braids. Then again, the women who don't have to do this miss out on hours of touching, talking and closeness. On school-day mornings, while I braid, twist or merely gather their hair into a ponytail, we go over spelling words, discuss the playground bully and choose something special for preschool share day.

Of course, those who don't spend the early morning styling hair have better hairstyles than mine, I'm sure, because once I'm done with the three beauty queens of curl, all I do with my own hair is stick my wet head out the window of the van on the way to work and call it blow-drying.

I remember the hours spent with friends, doing hair, touching, joking and being close. Back in high school typing class, my friend Vicky taught me to braid cornrow-style long before Bo Derek. Vicki had long, wavy, black hair, looked like an Egyptian queen, and she teased me about getting a perm. In college, I braided my hair, wistful for home, and even cornrowed for a friend, a linebacker on the football team.

After I was married, I spent hours in my mother-in-law's house, watching relatives and friends braid hair, laugh, watch movies, make lemon cake and talk and talk. They teased me about the perm I'd finally gotten, and one friend talked to me seriously about my coming child.

In Washington, D.C., years ago, I met a biracial woman whose mother was German and father was black. Her mother refused to style her hair until someone rescued the girl and took her to a black beauty salon. I remember the hurt in her voice even then when she described it, and I thought about a mother's rejection reflected in tangles and neglect.

From the time I first bathed my oldest daughter in the kitchen sink, I was careful to comb out her perfect snail-shell curls, thrilled at her intent stare on my face when I fastened barrettes at her temples. At 2, Gaila's hair was past her shoulders, dark-brown ringlets that lightened to copper at the ends in the summer.

Delphine's hair was true black, wavier and thicker, a dense cloud of ponytail if we didn't moisturize. And Rosette's hair took the longest to grow -- she would sit in the bathtub next to her sisters and cry that she wanted her hair to touch her butt like theirs. Now that she's 4, it reaches the middle of her back, perfect spiral curls that have tints of gold and bronze.

None of them has ever left the house for school or sports without her hair being combed and styled. No one else has ever washed, conditioned and combed out all that hair. If I was gone on business for three days, and their father or my mother watched them, I came home to bird nests, snarls and elastics left in so long they had to be cut out.

But that's OK. Rosette is what we call tender-headed, and the slightest tugging at her scalp makes her cry. I'm willing to be patient, because this is what we do. I realize that many parents don't even watch TV with their kids. Everyone has his or her own set, in separate rooms, and separate lives. (OK, it helps that we have only one set, and we're crammed into a tiny house. Still.) While I've combed and braided over the past eight years or so, we've talked about what Steve Urkel was doing, and then Sabrina and her friends.

We've watched figure skating, music awards, "My Fair Lady" and "Runaway Bride." We've talked about marriage and divorce, rich and poor, black and white, and all the things in between. We talk a lot about the middle, while I'm parting down the middle, then dividing the strands and securing the ends with glittery elastic.

Summer is the most trying time, I'll admit. Gaila is a dedicated swimmer, but without that kind of greenish-gold low-maintenance hair you see on Olympic types. Swim caps, with two braids tucked under, are essential. And still, this summer she came home from a birthday party during which she'd forgotten to do anything but swim for hours, in and out of the pool for two days. She was crying hysterically when she got into the house. Her waist-length hair was barely touching her shoulders. She had dreaded-up big-time.

I wanted to cry hysterically, too, examining the mass of spongy, fused hair. But I tried to joke around. "OK," I said, "so I like dreadlocks, and if you ever decide to dread-up, that's cool. But most people have multiple dreads, sweetie, not just one. The 10-inch wide, horizontal one."

I ran across the street to find my neighbor Juli, who though very pale-skinned with long, red hair, was the only white girl on her Texas high-school track team. During her hours on the bus and the sidelines, she learned to braid and comb very well. And it helps that she loves my girls, and my porch, with a fierce passion.

During the two hours it took us to work a chamomile-conditioner mix into the damp mass of hair, then separate the curls with a comb, Gaila cried sometimes at her tender scalp, and Delphine held her hand, while Rosette sang songs. The whole time, even after Juli's wrists got tired and she fetched iced tea and let me do the combing, we talked.

Juli and I discussed her workmate Tiffany, who had just dumped another guy but kept his multicarat engagement ring. Then Juli, who had just finished reading a history of Henry VIII and his wives, told us the whole tale of nuptials, their true political, social and romantic reasons, their often unhappy ends. We had time to cover it all, instructive female history, contemporary and medieval, and I looked around at my daughters, who were spellbound. I pulled yet another strand of hair loose, making a combed-through section, and Juli began to braid from the other side, adding gold fasteners she'd bought especially for an occasion like this. Delphine said thoughtfully, "So I have it figured out, Mom. If you were a woman back then, you were sick, pregnant, dead or in a tower. Right?"

Juli took another drink of her iced tea, and I felt Rosette's hand on my leg, Gaila's shoulders against my knees, and Delphine's breath on my neck. My fingers wove and wove, and I knew what was braided into each minute we spent there.