Sims in the hands of an angry God

Why are we so eager to torture the beings we've created? The latest game from Maxis opens a window into the psyche. 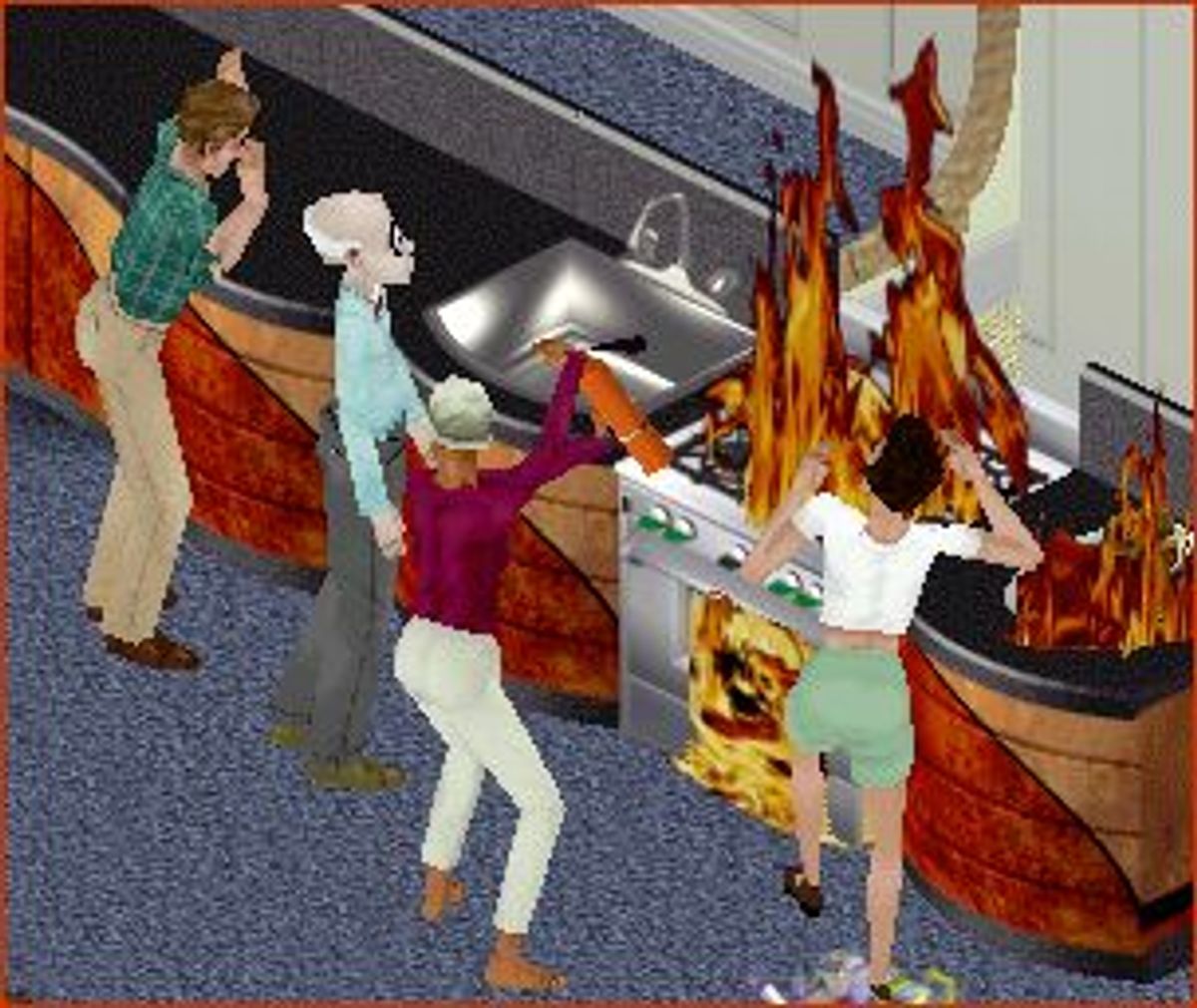 What does it say about me, I wonder, that I let my first child -- sweet helpless Bobby Boozington -- suffer so miserably that he slipped into a catatonic funk, flunked his classes and had to be sent off to military school? Why did I torture Michael Bachelor -- taking away his refrigerator and replacing it with expensive stereo equipment, so that he eventually died of starvation? And just why did I make Susie Boozington attack Bella Goth?

I must be a sick, sick woman.

The Sims is the kind of game that makes you question the workings of your own psyche. Maxis, maker of the popular SimCity series, has long been the master of games that let you play God by building and destroying cities and their civic culture. But its latest adventure in virtual living takes the God complex one step further: This time, you're playing with people's heads. Maxis calls the Sims a "people simulator" -- a game where you build people and try to turn them into healthy, balanced, happy individuals -- or torture them. And I'll bet the odds are quite good that most people will use the Sims to fulfill their twisted fantasies about human relationships. The dark side of human nature, after all, is far more interesting than normalcy. Let chaos reign!

The Sims plunks you down in the middle of a half-built neighborhood; your job is to create and manage the families that will live in the homes. The game comes with one pre-programmed family, the affluent and well-adjusted (if you disregard the fact that dad is a human guinea pig at the local laboratory) Goths. You can mess with their lives, if you like; but the most fun comes from building your own Sims from scratch.

Sims come in one of 12 personalities, based on the signs of the zodiac (those who follow astrology will get devious pleasure in matching a Taurus with an Aries). Design a few Sims, plunk them into a home and set them to work: buying furniture, appliances, flowerpots and paintings, and finding a job through the local paper (maybe a notable career as a pickpocket or military recruit). You, as their God, must teach and prod them to take care of themselves: to cook, get in shape and work their way up the corporate ladder so that they can make more money. Although the Sims have some autonomy, they need to be trained -- a slothlike Sim, for example, won't use the toilet if you don't prod it first.

Making more money is critical -- the cheap furniture and household items that impoverished Sims can afford will bring them only meager happiness, while wealthy Sims derive great pleasure from their fancy gym equipment, colonnaded homes and "Dolce Tutti Frutti" sofas. All Sims begin with entry-level jobs, and have to gain the right skills to advance in their professions. Social interactions are also critical, and you'll have to introduce your families to the neighbors, set them up with dates, friendships and, if you like, a few mortal enemies.

All of this makes for a complex game -- the creators of the Sims have thought of everything, from clogged toilets to burglars to nursery-style wallpaper you can purchase for the kids' room; it's sometimes boggling to think of all the things you can do. But it's also slightly tedious: Nothing happens quickly, as Sims develop relationships and advance their careers in methodical, building-block fashion. It takes days of repeating mundane tasks to train your Sims enough that they can navigate solo through even the smallest duties of their lives.

Simulating a human is no easy task, and while the Sims are far from human, Maxis has created an impressive engine for building unique personalities. Take, for example, my first family, the Boozingtons. I thought that Dirk and Susie Boozington would automatically get cuddly if I simply kept them close to each other; instead, they didn't seem to share the same interests at all (the characters talk in gibberish, but you can read their "thoughts" by the icons that appear in thought balloons above their heads). Playful Susie's attentions seemed more readily caught by balding Bob Newbie across the street. Just for the hell of it, I had her attack Bella Goth -- but one slap and Bella never visited again.

Even the kids aren't automatically compatible with their parents. Since neither of his parents was neat, I set Bobby Boozington to work cleaning the house -- practically a full-time job in itself, as his family scattered their food-encrusted plates on the kitchen floor. He started out as a well-adjusted kid, but as he was deprived of parental love and worn down by all those trips to the trash can, depression set in. Eventually, Bobby flunked out of school.

With Bobby gone, I soon got bored with Dirk and Susie, and set up another house. This time, I plopped a pair of single gals -- Chris and Melissa -- in a humble little tract house that I designed myself (note to self: shoddy materials equal ugly home), and fixed it up with a cheap TV and a big coffee pot. After sorting out some little domestic problems (Melissa's rotten cooking skills set the house on fire, and Chris broke the shower), I set to work fixing Chris up with Mortimer Goth from across the street; five or six visits and about 20 compliments later, they finally kissed. But that kiss alone took hours of play -- lord knows how long it will take to coax them into a little horizontal action.

This game, like most Maxis games, is endless -- the possibilities are limited only by the number of Sims you build -- over time, you can even prompt them to marry and make babies. Developing a career must take months (in three days of nearly full-time play, only one of the Sims ever got promoted). And some of the interactions in the Sims became predictable. You soon figure out that if a Sim compliments a stranger too soon, he'll get rejected; and if you deprive a social Sim of friends, he'll get so depressed he'll refuse to eat or drink, and so on.

But the game is absorbing nonetheless; so absorbing, in fact, that you can waste entire days (as I did) obsessing over the minutiae of the Sims' lives -- instructing them to eat, sleep, play and clean. Monotonous, yes, but bizarrely fascinating. (Why is making a Sim clean his house more interesting, I have to wonder, than cleaning your own house?)

Even more fascinating, however, is seeing what happens when you give up trying to make your Sims happy and begin to torture them instead. That's what I did to poor Michael, a recent college graduate who I fixed up with a zebra-striped couch and a fancy computer. I refused to let him use the toilet, just to see what would happen, and he eventually peed on the floor. When flies began buzzing around the garbage on the carpet, I decided not to let him play on the computer until he'd cleaned up the mess he'd made. And as a final indignity, I removed his refrigerator and waited to see how long it would take him to starve to death. The answer: two days.

This, I suspect, will be the fate of many, many Sims on many computers around the world; in fact, Maxis condones this kind of behavior. ("We know it's hard to resist tormenting them," the game guide pleads, "but do give them a decent meal now and then.") Games like this will ultimately bring out the twisted side of human nature. We want to see tiny humans attacking each other, having sex, feeling sick and neglecting their children -- living out the malicious fantasies that we ourselves must repress every day. If everything runs smoothly, after all, there's no fun in playing God.

So, as a final, self-indicting coup de grbce, I created a new family to move into the former home of poor Michael Bachelor. This little twosome is now living with Michael's funeral urn -- they weep before it once a day -- and learning how to endure each other's foibles. The woman's name is Janelle, and she's a Virgo just like me; we'll see what happens with her new male buddy, Serge the Sagittarius. I wonder if I'll learn anything from the way they respond to being tortured by "God."