The high priest of voodoo jive put a spell on us with his fiery brand of psychotic rock 'n' roll. 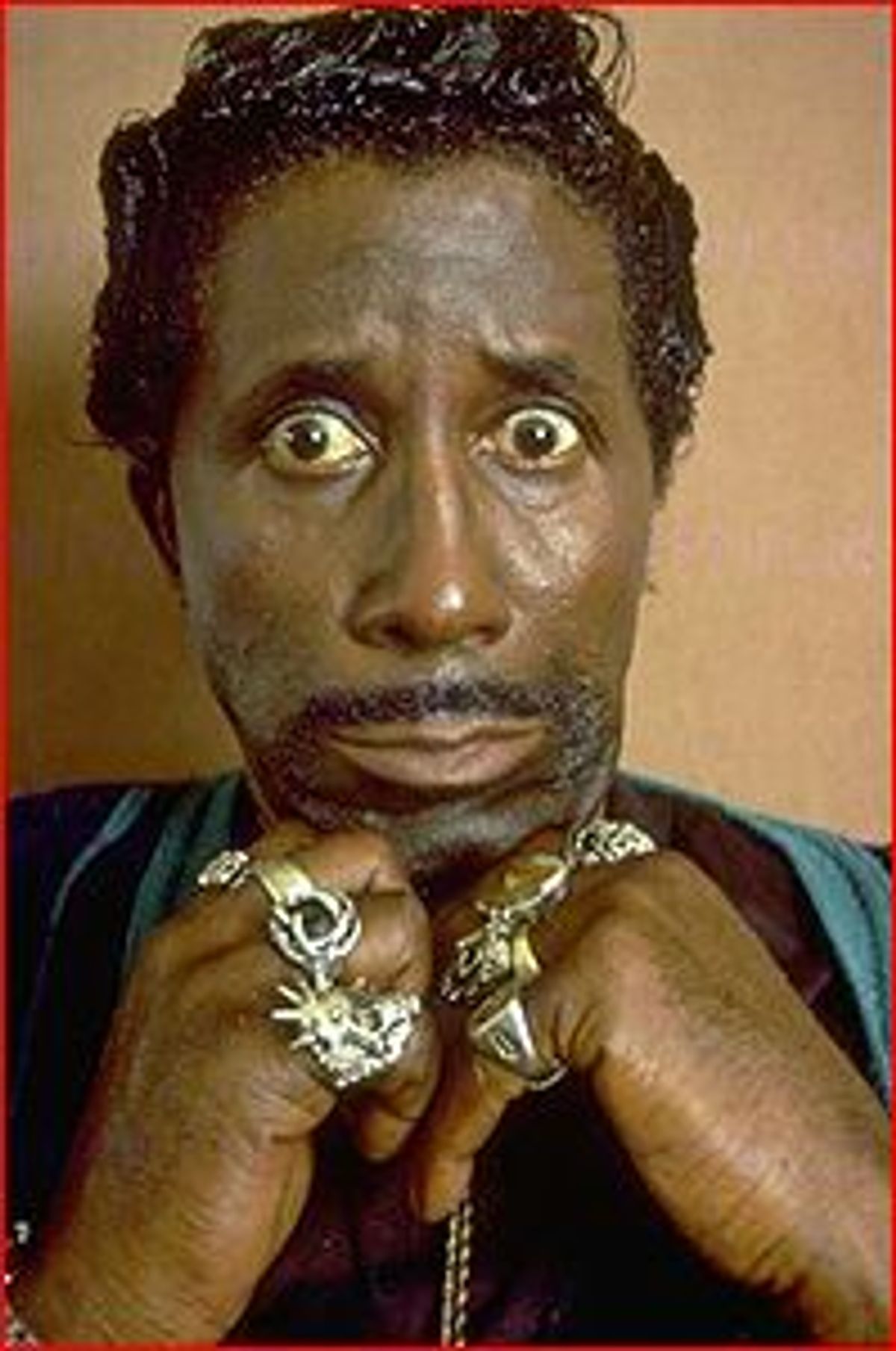 Screamin' Jay (born Jalacy J.) Hawkins, one of the greatest rock 'n' roll entertainers of all time, died Feb. 13 after surgery in Paris, having survived a distinguished amateur boxing career, a hand grenade in the Korean War and numerous dangerous special effects onstage.

Always dressing theatrically in a kaleidoscopic noir fashion that included capes, turbans and animal prints, and at times stepping beyond the bounds of good taste with his lyrics, Screamin' Jay found himself banned all over the United States in 1956 for an orgasmic celebration called "Little Demon," but that didn't hurt sales of the record, which surpassed a million. More recently he put out the decidedly un-p.c. "Ignant and Shit," a depiction of female mental deficiency that unfortunately produced no publicity-generating lawsuits or bungled assassination attempts.

His globe-trotting career and a succession of spooky platters gained him a cult following all over the world while various folks, from Nina Simone to Eddie "Cleanhead" Vinson and the Jackson 5, covered his tunes. One of his big fans has been moviemaker Jim Jarmusch, who cast him in "Mystery Train" and used his recordings in other films, including his macabre masterpiece of obsessive love, "I Put a Spell on You," in "Stranger Than Paradise." He also can be seen in the 1978 '50s rock epic "American Hot Wax," which details the life of disc jockey Alan Freed, the man who gave Screamin' Jay his trademark gimmick of rising from a coffin.

An African-American man born in Cleveland in 1929 and who was reported to have been brought up by Blackfoot Indians, he got his nickname from a woman who heard him sing in Nitro, W.Va. Quoting Jay's account in the liner notes to "Voodoo Jive -- the Best of Screamin' Jay Hawkins": "There was this big, big huge fat lady there -- just allow your mind to roam free when I say fat. Glutton, beast, o-bese. The woman made the average elephant look like a pencil, that's how fat she was. And she was so happy! She was downin' Black and White scotch and Jack Daniel's at the same time, and she kept lookin' at me. She says, 'Scream, baby! Scream, Jay.' I said to myself, you want a name? There it is!"

Monday, Valentine's Day. I got home from a trip to Canada and read an e-mail telling me of Screamin' Jay's departure from this mortal plane. I recalled the phone conversation Mr. Hawkins and I had about eight-and-a-half years ago.

Midnight. I had just settled in for a good night's sleep. The phone rang. Sweet Jesus! Probably one of my tenants experiencing what might be perceived as an emergency. I didn't usually pick up late at night or early in the morning; I just let the machine get it and monitored the message, if anybody had the temerity to leave a message for the building manager at the witching hour.

This time, for some reason, I lifted up the receiver.

"I just got back from Japan and found your letter on my desk and it knocked me out," rumbled a basso profundo voice I didn't recognize right away.

I thought, very funny. Maybe it's another fellow poet mocking me by waking me up to tell me how much he liked my compositional skills (as did happen once). I remained silent, as did the caller. I decided to get it over with, whatever the prank was.

"Um, this is Screamin' Jay Hawkins calling you --"

"Screamin' Jay!" When else would the High Priest of Voodoo Jive call, other than midnight? And that voice! He originally wanted to be an opera singer and idolized the big baritone of Paul Robeson.

"I see that you have done something with my song." Then he paused for a second or two, though it seemed to last a lot longer. A dramatic pause. I'd heard Screamin' Jay was the head of his Neighborhood Watch back in 1991 and he drove around the San Fernando Valley in his Cadillac with a trunk full of shotguns. Suppose he hadn't liked my version of his signature tune, which I had transformed into a protest song and retitled "I Put A Spell On You (Politically)" before I sent him the lyric and a recording, with a cover letter asking his permission to continue my metamorphosed homage? I thought, well, at least he's 300 miles away.

"I just wanted to say it's very interesting and I wish you all the best with it. I had a lot of success with that song, and now it's time for some younger fellows to come along and do something with it. More power to you."

"Well, thanks! I thought I'd try and share with you what I was up to. I got your address from a friend of mine, Roxanne, who did some house-sitting for you, along with her sister Sharice," I added, hoping to cement our nascent friendship.

"Roxanne and Sharice!? If I ever see either of those women again I'm gonna put a penis where her nose is, sprinkle salt on their tail and make 'em walk backwards! I gave them $500 to make sure there was food here when I got home, and when I came back from Japan the cupboards were bare, and those women were fat!"

"Well, I'm getting a little tired of this touring thing. I'm working hard to save me up enough money to get a little nightclub like Chuck Berry has, a nice little place in the sticks, with a stage and a little spotlight, where I can get up and scream once in a while if I want to. That's all I need. I hope to be there in a couple of years."

"Good luck. Sounds like a good plan. Say, I was looking all around, and I can't figure out who owns the publishing rights to 'I Put a Spell on You' now. Do I send you royalties?"

"No, I'm afraid I sold them a long time ago. Sony owns it. They just bought MCA. It's no skin off my nose if you use it. To hell with them, anyway. They owe me money! So just go ahead and do whatever you need to do. I wish you all the luck in the world with it. Say, you know, I have a sister up in the Bay Area."

"No! Well, sometime when you come up here to visit her, maybe you'll let me take you out to dinner?"

"That could be arranged."

We never had that dinner and he never started his little nightclub. Instead, he moved from the suburbs of Los Angeles to the suburbs of Paris and I got a couple more of his records and basked in the kinetic kookiness of "Alligator Wine," "Frenzy," "I Hear Voices," "Yellow Coat" and "(She Put the) Wamee on Me," my favorites among his many wild, wonderful and not unhumorous explorations of psychotic rock 'n' roll.

I wonder if there was a big woman watching over his bedside when he exited this last time. It didn't surprise me that what got him at age 70 was an intestinal blockage, and it reminded me immediately of the Hawaiian hospitalization that inspired his novelty hit "Constipation Blues." But I don't want to remember him that way. I want to think of him as one of the true rhythm and blues originals, a funkmeister with a flair for the dramatic, a man who brought Halloween to every hall he played, no matter what time of year it was. Watch out Oct. 31 for the return of Screamin' Jay, accompanied by his talking skull Henry. He's coming out of his coffin in your neighborhood. You'll probably hear his demonic laugh first, or maybe your Screamin' Jay apparition will be singing his version of "I Love Paris in the Springtime," and singing it like he really means it, but not like you ever heard it.