Britain is to blame for greatest crisis in Northern Ireland since the cease-fire began. 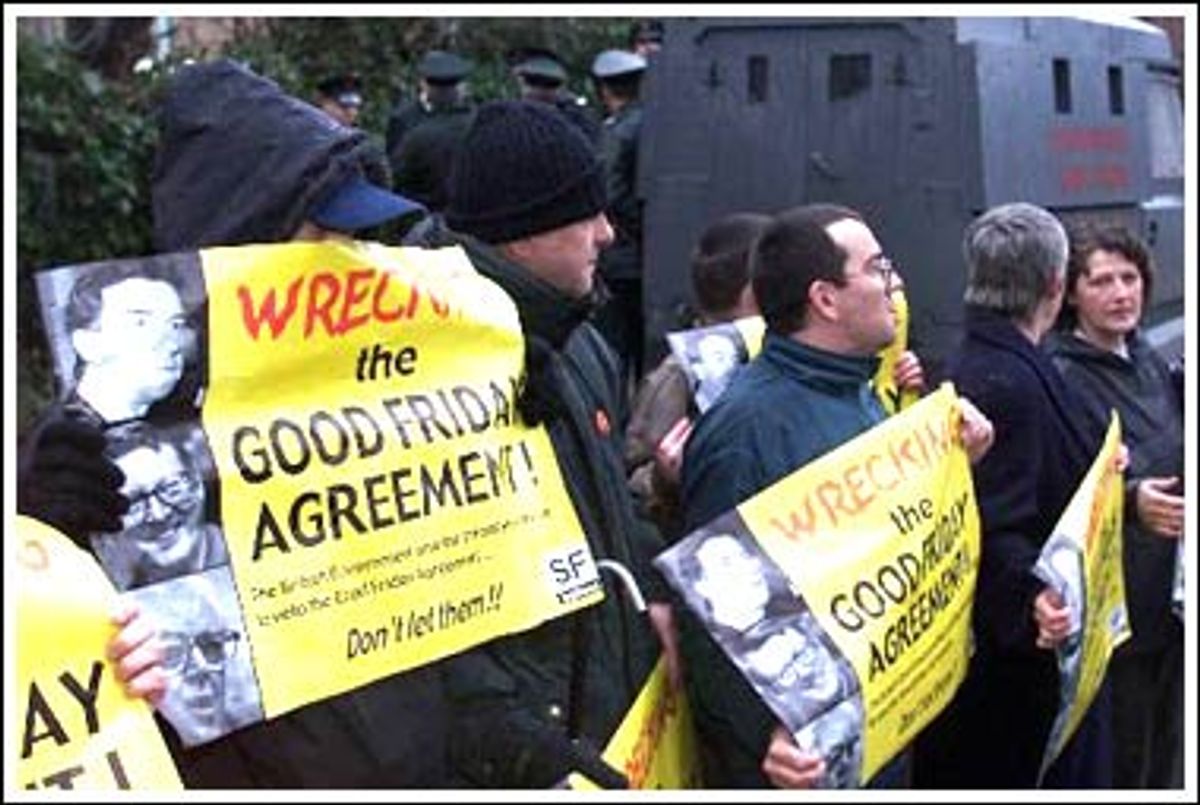 "Keep your nerve," Gerry Adams, the president of Sinn Fein, used to remind his allies in Northern Ireland's Republican political circles during particularly edgy moments leading up to the Good Friday peace accords signed in 1998.

The talks reportedly bore little fruit. "The institutions have been torn down and the Good Friday Agreement has been torn up," Adams said outside in exasperation. By Friday, leaders from all sides were booking flights to Washington for White House meetings next week.

The current crisis is the most profound since the IRA's current cease-fire began in 1995. Adams and his IRA-allied Sinn Fein are at loggerheads with suspended First Minister David Trimble. Trimble's Ulster Unionist Party provoked the current crisis by threatening to withdraw from the government altogether if the IRA did not satisfy Trimble's personal deadline for a disarmament timetable.

Britain's suspension of the power-sharing government also infuriated Dublin, where the new Northern Irish institutions have been written into the Republic of Ireland's constitution after a popular referendum.

Irish Prime Minister Bertie Ahern believes Britain's Northern Ireland Secretary Peter Mandelson's suspension of the Belfast government -- supposedly designed to buy time -- has no basis in law, and puts whole process in jeopardy: "Each day they are suspended is a day in which further damage is being done to the well-being of the agreement," Ahern said Tuesday.

The immediate source of today's crisis was a revival of what is known in Northern Ireland parlance as "the "Unionist Veto" -- the long tradition Ulster's Protestant majority rejecting any accommodation with the Roman Catholic minority, now nearly half the population of the province. Mandelson's predecessor Mo Mowlam periodically angered Unionists by declining their veto demands, and Mandelson was named in part to assuage that fury.

In this case, Mandelson decided to accommodate the Unionist veto in the form of Trimble's insistence that his Ulster Unionists would only remain in the new government if the IRA began handing in its arms by February. It was a demand completely outside the terms of the Good Friday accord, which set a May date for all of Northern Ireland's Catholic Republican and Protestant loyalist paramilitaries to cooperate with an international disarmament commission.

Trimble's demand turned last week into an occasion for Belfast brinksmanship. The IRA's leadership repeatedly asserted its commitment to the Good Friday process, but not to Trimble's threats.

With Trimble threatening to bring down the government altogether, the IRA -- while vowing it would pose "no threat" to its cease-fire -- went down to the wire of Mendelson's self-imposed deadline last Friday before giving the disarmament commission reassurance that it would put its arsenal "beyond use" in keeping with the treaty. Ahern now maintains that Mandelson pulled the plug even though he knew the IRA proposal was on offer -- a charge London denies.

Mandelson, later admitting that the IRA's proposal was "a big advance," nonetheless drew a line in the sand and suspended the new government, returning rule of Ulster to London. On Tuesday, the IRA shut off contact with the arms commission and withdrew its offer from the table.

While Mandelson's move pacified the Unionists, it defied the logic of the past five years. When Northern Ireland's peace process has worked, it has been because a succession of intermediaries, ranging from Irish-American business leaders to Irish and British officials to Senator George Mitchell, insisted upon keeping the key parties at the table.

Officials continue to speak publicly about restoring the suspended Northern Ireland government as quickly as possible. But some of the most informed observers believe the Good Friday process as it has existed is finished. "Essentially, arms decommissioning is dead," said one intimate participant in the peace process.

As political leaders descended on Downing Street, two small events occurring well away from the cameras in Northern Ireland served as evocative reminders of the stakes in this crisis. At St. Patrick's Cathedral in the town of Armagh on Monday, several hundred people assembled for a memorial service commemorating those "disappeared," killed by one paramilitary faction or other and never recovered, during the 25 years of the Troubles.

Archbishop Sean Brady addressed an assembly of people from both communities, urging those who knew the locations of these brutal burials to provide that information. "A grave gives us a focus for grief," he said, and the opportunity to satisfy this critical human need to reckon with the physical facts of death would provide the means for both communities to "create together the kind of future we really want."

If that service was a reminder of the worst of the recent past, a ribbon-cutting in Monkstown underscored the stakes for the immediate future. There, the Canadian telecommunications conglomerate Nortel announced a new # 29 million investment package and 500 new jobs, creating Nortel's largest systems facility in Europe. But company president John Roth issued a pointed warning: Political stability "will be an important consideration" in any future investment.

Returning local government to Belfast after 30 years of rule from London was supposed to empower the most compromise-minded elements among Republicans and Unionists. It would force them to find common ground in the day-to-day business of running schools, sewers and streets. Mandelson's suspension of the process does precisely the opposite -- it has given credence to the hard-liners and most polarizing voices on all sides.

Just how polarizing can be read in the fine print of the IRA's withdrawal from the arms-decommissioning process. Not only did the IRA pull its current offer from the table; it accused the British government and Ulster Unionists of seeking "a military victory" rather than a negotiated peace, and withdrew "all propositions" made to the international arms-handover commission since November -- ominously moving discussions back to square one.

The irony is that until last week, the IRA's military leadership had long accepted the wisdom of putting its arsenal on ice. It supported Adams's commitment to promote the goal of unifying Ireland through elective office both in the Republic and the North. What returned the IRA to center stage last week was not a hard-line Republican faction but Trimble's intransigence and Mandelson's inability to see beyond it.

Is it possible, as Tony Blair pledged today, to "pick up and move on" from such a disastrous impasse? Perhaps -- but it will likely be a far different and more limited peace process from that underway just last week.

Niall O'Dowd, publisher of the Irish Voice newspaper in New York and one of a handful of Irish-American community leaders who jump-started the peace process in 1993, believes that both disarmament and a locally-controlled Ulster government are now dead in the water. O'Dowd, whose weekly newspaper maintains close relationships with players on all sides in Northern Ireland, believes "the best hope -- and what Sinn Fein will be looking at -- is to negotiate areas of the peace process where there can be no Unionist veto."

He paraphrases the sentiment among senior Republicans: "Good Friday is dead. Long live the peace process." That means pushing forward police reform, workplace equality and other issues, but abandoning the Good Friday legislative framework. Sinn Fein, he says, "no longer trusts that process, and believes that Trimble is unsafe at any speed" as a coalition partner.

One unresolved question is a role for Washington. So far, the White House played it low-key, backing the Blair government's suspension, urging the IRA to make more aggressive disarmament moves. A senior National Security Council official told Salon that so far, the NSC is playing no active intermediary role in the crisis, although next week Trimble, Mandelson and McGuinness are each expected to meet with NSC Chief Sandy Berger.

This deference to London is in sharp contrast to the Clinton administration's early commitment to a Northern Ireland rapprochement, with NSC officials brokering negotiations and a U.S. visa for Gerry Adams in defiance of the notoriously Anglophilic State Department bureaucracy. Later, Clinton encouraged the appointment of George Mitchell as peace negotiator.

In Belfast, Clinton is still regarded as an honest and independent peace broker, and in Washington, Northern Ireland is recognized as one of the administration's few foreign policy success stories. From both directions, pressure may swiftly emerge for a mideast-style peace summit, an opportunity to revive the dialogue shut off by Mandelson's botch of the arms confrontation.

In the meantime, Northern Ireland stands in a state of watchful waiting -- its elected government suspended after just two months, the IRA and loyalist paramilitary cease-fires holding but vulnerable to unforeseeable events.

The peace process has always been about far more than disarmament or even elections. But without the cross-border and cross-community institutions the Good Friday agreement created, the gains of the last five years will take far longer to secure.