"Scar Vegas and Other Stories" by Tom Paine

In an amazing debut, a fired-up writer takes aim at dumb American swaggerers and corporate greed. 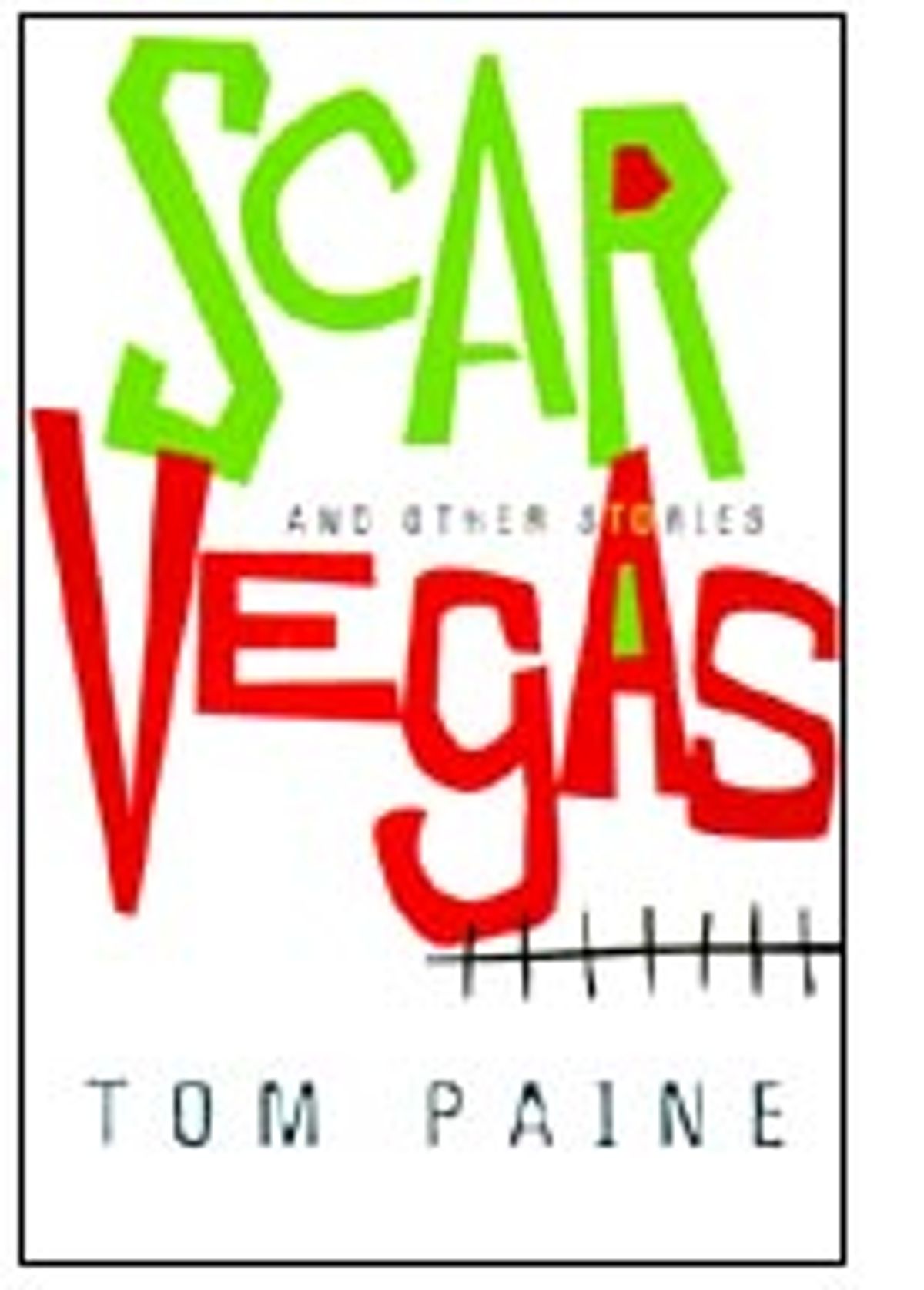 Tom Paine wants to knock the world off its feet, yank its legs up in the air and shake it around till it cries uncle. And he pretty much does just that in "Will You Say Something, Monsieur Eliot?" the breathtaking story that opens his first collection, "Scar Vegas." Eliot is a king-of-the-world type, a rich, handsome, cocksure Princeton grad who goes through women like so many candy bars and pours money into his true love, a perfect sailboat called Bliss. When we meet him, however, he and Bliss are getting their comeuppance in a fierce Caribbean storm:

The wooden yawl shuddered deep in her timbers, and Eliot was catapulted from the cockpit and landed chin first on the deck and heard his molars shatter. Weightless for a moment as Bliss dropped, Eliot again cracked down against the deck like a fish. The bow rose up the fall of a mountain of water and Eliot fell headfirst toward the wheel. His heavy arms locked in the spokes, and his Adam's apple crunched on mahogany, and he was upside down, bare feet to the sky.

The wheel of fortune, imported quite nicely to the late 20th century. But what Paine has in mind is not just the terrible justice of this world-upside-down moment. Half-dead, Eliot is rescued days later by a boatload of Haitian refugees, themselves dying of thirst and starvation. To them, this maimed Yankee is the king of the world; surely help can't be far behind. Days go by, and the Haitians' mixture of generosity and credulousness builds to an almost unbearable irony. We're all mortal, but even in the great-equalizer game of humanity against nature, Paine suggests, Americans have a staggering edge over those born into poor, chaotic nations.

Westerners' unself-conscious sense of entitlement also permeates the less visceral but still satisfying story "The Hotel on Monkey Forest Road." Here, an American tells a tale he's heard in a bar in Rangoon, Burma, about a Canadian developer who tried to build a glitzy hotel on the Indonesian island of Bali, trampling shamelessly on native customs in the process. He ships in three dozen Florida orange trees to the fruit-rich island and runs into all kinds of hilarious trouble at the hands of the Balinese elders. It's a potentially clichid anti-imperialist scenario (right down to those horticulturally incorrect trees), but Paine's evenhanded humor makes it work. He's a master at translating the rhythms and gestures of you-had-to-be-there storytelling onto the page.

The final story, "The Battle of Khafji," also uses a live voice, this time to take us deep into the peculiar horror of the Persian Gulf War. An American serviceman -- just a regular guy -- tells us the story of Packer, a weirdo sergeant who begins as the butt of jokes but becomes an eerie, seerlike Mr. Magoo figure in the midst of the exploding desert. "Is it still a war if nobody dies on one side?" asks Packer. If Paine's attitudes are sometimes predictable, he plays them off beautifully against the kind of disconcerting modern American dilemma that the Gulf War represents -- and at times, his meandering colloquial directness achieves an almost epic resonance.

A certain masculine score settling drives the stories in "Scar Vegas," and perhaps as a result Paine doesnt know quite what to do with his female characters. The weakest story in the collection, not surprisingly, has both a female protagonist and a revved-up anti-corporate agenda. A tightly wrapped MBA shark named Melanie Applebee, a Greek-American who has transformed herself into a dyed-blond fake WASP, has fallen from grace after ratting on a superior for insider trading. Blackballed off the edge of the corporate map, she travels to Tucson, Ariz., to talk with the only two-bit firm willing to interview her. But when she arrives the building has been wrapped in tape by the feds, "a late casualty of the savings and loan crisis." Dazed, furious, broke, she winds up in El Paso, Texas, where she's preyed on by a Mexican border rat. Is she supposed to be the female Eliot -- queen of the world? It's not very convincing.

Still, the fervid yet pristine beauty of Paine's prose, the exuberance of his storytelling and the impressive range of voices he takes on are enough to make most of these stories worth reading and rereading. And there is an uncommon humanity in what he's trying to do. If he sometimes sees his way there through a cluster of attitudes that already seem dated, that's hardly ground for dismissing his work. These stories have their own idiom, but they're part of the important American tradition of throwing an individual consciousness out into the universe and shaking a fist at the indifference, the smallness of spirit, the institutionalized ugliness that's out there -- and scanning the horizon for beacons of light. Stephen Crane and Herman Melville took on slavery, long bloody wars, the deadly social wilderness inhabited by the fallen woman in their fiction. What do American authors have now to test humanity against? Where does evil reside these days? For Paine, it's in the global corporate menace that seems to lurk behind many of the stories in "Scar Vegas," and if that vision seems occasionally reductive or insufficiently complex, it's still enough to fuel one of the most amazing debuts in a long time.