Make me an offer: At eCollegebid.org, students name their price for tuition. You may get a cut-rate deal -- at a no-name school. 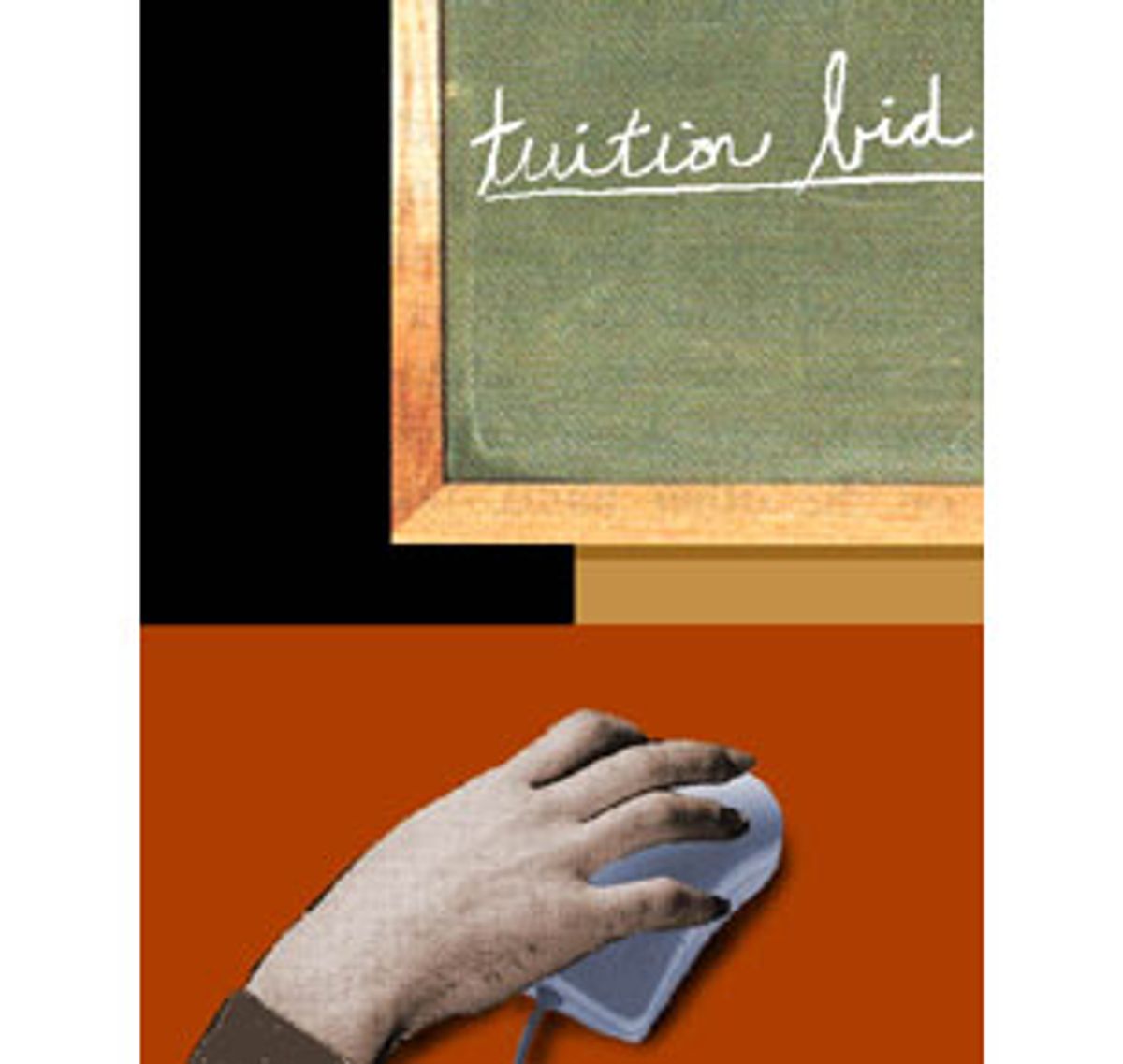 Tedd Kelly's Web site is a bit like that second "d" in his first name -- a little jarring, probably harmless, perhaps a complete superfluity. Critics are chagrined by what his online business purports to offer and even proponents embrace the service with a hesitant hug. Yet some folks agree that, given a few years, Kelley could be onto something. Perhaps.

Launched in October 1999, eCollegebid.org seems like a cross between the auction site eBay, Match.com dating service and Priceline.com, which invites customers to bid blindly for discounted travel tickets. Middle-class students applying to college who may be overqualified for aid can bid on an education.

The site motto is: "Going to college is smart. Paying too much is not." Applicants are asked the maximum figure they could contribute to first-year tuition, their grade point average, Scholastic Aptitude Test scores and what they are looking for in a college. It's that easy: Complete the form, submit a bid and wait between 10 days and two weeks for a school to contact you. The hitch is that bidders have no idea which colleges are participating; as with Priceline.com, it may be a low-budget Valujet or a high-quality Virgin Air lurking behind the curtain.

"ECollegebid looks at all this information," said Kelly, "and colleges say, 'We are interested in working with this student to get them to apply.'" But unlike Priceline.com, where people are stuck with the first airline ticket that matches their destination, eCollegebid offers "deferred obligation." So you aren't locked into the Fashion Institute of Technology when you'd prefer Sarah Lawrence College.

Admissions counselors fear that unsophisticated parents -- unaware of how much aid they might qualify for -- will overbid, and gullible students might accept a school's offer too soon. Admissions officer Jerry Pope, vice president for admissions practices at the National Association of College Admissions Counselors (NACAC) and associate dean of admissions at Illinois Wesleyan University, points out that when it first went up, eCollegebid required students to respond and commit to a school's offer within one month.

Universities traditionally allow applicants until the first of May to respond to overtures, so they can consider offers from all colleges and know the status of financial aid and scholarships. After a negative response from the NACAC, Kelly quickly streamlined his site to adhere to NACAC statutes, but it's odd that an educational consultant and admissions officer with more than three decades of experience would make such a gaffe. Kelly is well acquainted with the insecurity that tuition payments provoke and sells his one-stop college shop as a panacea for folks looking for a financial solution. Although Kelly has agreed to play by the NACAC rules, the organization is not about to endorse his business anytime soon. "A lot of different factors go into choosing a school," said Pope, adding that the best deal isn't necessarily the best choice.

Unlike buying a plane ticket for a four-hour flight, committing to a four-year education requires one to consider a lot more than layover and leg room. Pope stressed that applicants must examine such factors as what kind of school they want to attend, its location and its curriculum. For example, a volleyball-playing math whiz who's a real beach rat would hardly be happy at a Division III, liberal arts college in the Northeast; the fact that it's a bargain won't be much solace. Buying a shirt on sale without trying it on can be disappointing when you get home and can't button it. But a bad fit in a college is devastating. These issues are only tangentially addressed in Kelly's Web site.

Kelly also irked a few NACAC members for using the .org domain usually reserved for nonprofits, which he chose because it sounds "less commercial." Although eCollegebid.org has yet to turn a profit, it is a for-profit business. Member schools pay an annual fee of $2,000, but as of February, no student had accepted an offer from an eCollegebid participant.

So which colleges are examining these bids? Kelly demurs; all but two requested anonymity. Otherwise, he adds, it might encourage haggling from students applying to those schools through the traditional route. Or could it be because these colleges are the sort that advertise in the back of Maxim? Two brave schools that dropped the veil are Seton Hill College in Greensburg, Pa., (not to be confused with Seton Hall University in South Orange, N.J.) and, surprisingly enough, Catholic University in Washington.

ECollegebid describes its members as a "consortium of colleges and universities" seeking to attract applicants and demystify the tuition process. The site is clearly not fertile soil for Ivy League recruiters, but that's precisely the point. Kelly hopes to play matchmaker, pairing second-rate students with second-rate schools. But the romance is still in the lash-batting stage. "I have 15 member schools and it all depends on how anxious they are to get students," said Kelly. Although there are so few colleges considering the "nearly 1,000" student bids, Kelly says each school assures him they have made contact with students at least once.

"My concern is that it seems such a narrow pool given the vast number of colleges and universities that exist," said Alice Drum, vice president of Franklin and Marshall College in Lancaster, Pa. The book "Funding a College Education," which Drum coauthored with Franklin and Marshall president Richard Kneedler, argues that budgeting for college doesn't have to require a second mortgage. There are several routes other than the ubiquitous Free Application for Federal Student Aid, and more merit-based grants are awarded today than ever before. "The premise of eCollegebid.org is questionable," Kneedler said, "when there is a merit grant available for [most] anybody."

Larry Levy is exactly the kind of person eCollegebid is targeting. As a parent with one son in college and a daughter currently applying, Levy appreciates a Web site like eCollegebid.org. "Many of us who are upper-middle class feel kind of in a bind," said Levy, a television writer in Southern California. "We make too much money to get aid, but private school is outrageously expensive." Levy and his friends are precisely the breed whom Kelly hopes to attract. But according to Drum and Kneedler, parents such as Levy may lose out by using Kelly's site because they're unaware of how much aid and grant money their children are qualified for. Imagine pledging $15,000 a year to an anonymous school, only to learn later that you would have qualified for more than that in aid and scholarships had you gone through the process the traditional way.

"It certainly was never intentional that it should be seen as capitalizing on ignorance," Kelly said. "That argument shortchanges the knowledge that students have of the Web. All a student has to do is go online and type 'financial aid' and they will never be able to read all the information" they'll find. He is emphatic that he began the site as a means for students to find schools that would otherwise never have been on their radar screens.

While colleges haven't been clamoring to join Kelly's party, cash-strapped students looking for a quick fix are apparently logging on. "I am blown away by the superior quality of the students," said Kelly enthusiastically, adding that the average student has a GPA of 3.0 and an SAT score of 1,200. "And many are able to pay between $10,000 and $15,000. The quality of the students is considerably higher than I expected." Now all he needs are more schools. Adopting an "If you build it they will come" attitude, Kelly explains that college administrators are not the gambling type; in due time, he adds, the idea and the site "will take off."

To test the Ecollegebid.org process, I submitted three bids. Although the site promises that "only member institutions will see your bid information," which includes such sensitive information as Social Security number and address, it is not a secure site. Good thing I was equipped with a nom-de-plume as protection.

Wrong. After two weeks, there were still no tugs on my line. Perhaps my vague lifestyle needs were insufficient to register "hits" considering the schools only see bids by applicants who are a perfect match to their criteria. I am not, however, totally unworthy of a diploma. Although I was snubbed by the eCollegebid consortium, I did receive a tsunami of spam from other businesses clearly concerned with my well-being. Lumped in with e-mails promising "guaranteed weight loss" and "free Viagra," I found this tantalizing offer:

Obtain diplomas from prestigious non-accredited universities based on your present knowledge and life experience. No required tests, classes, books or interviews. No one is turned down.

So fear not -- hope hobbles eternal on the Web. If eCollegebid should fail you, look no further than your phone. Call the University Degree Program 24 hours a day, seven days a week, including Sundays and holidays: (713) 866-6244.

Brian Braiker is a writer at the Washington Post.