Linux in every lap

Stars of the original Mac development team try to solve one of the hottest puzzles in technology today: How to make the Linux desktop user-friendly. 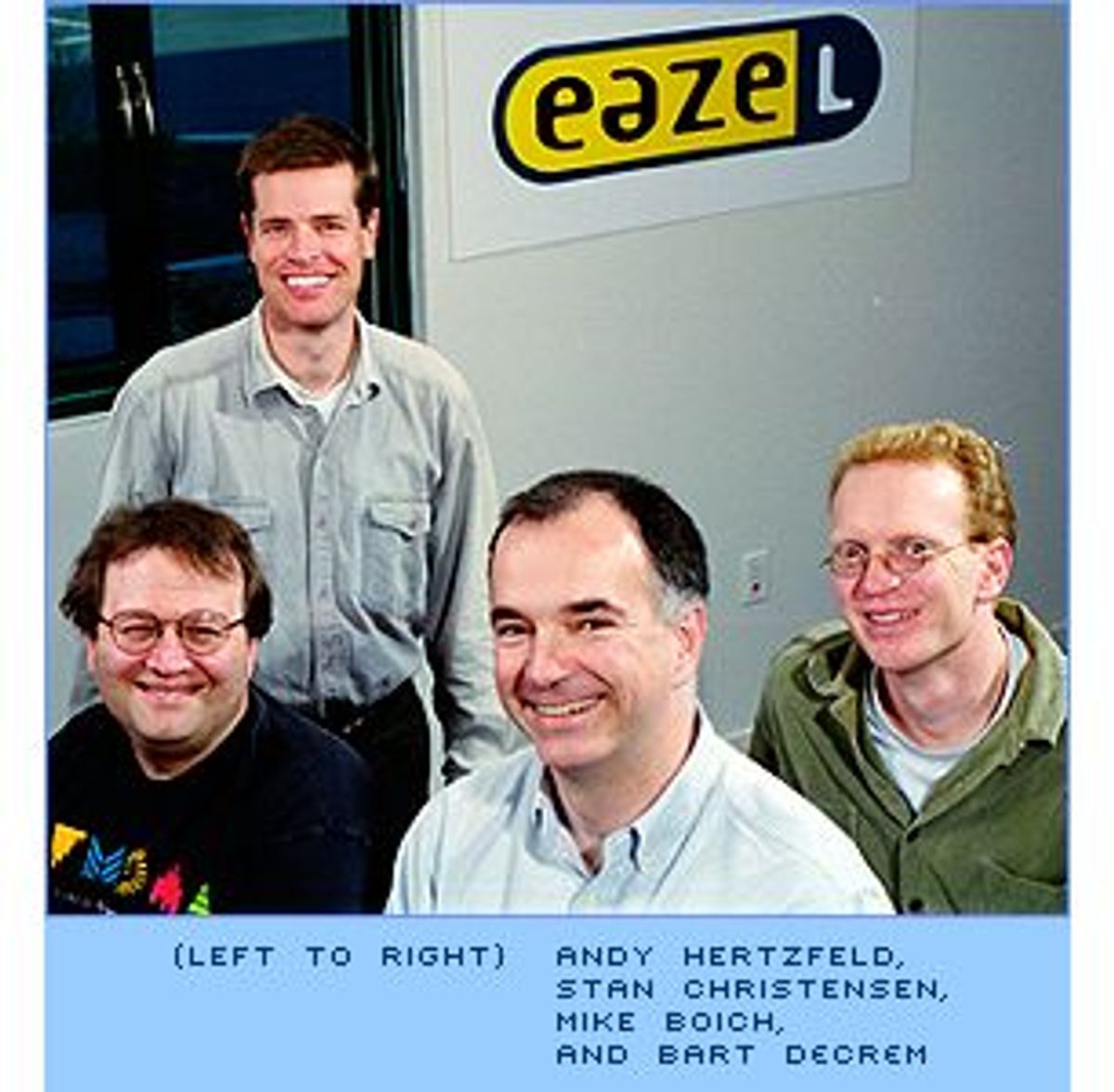 Across from a small sea of cubicles in a Palo Alto office, a photographer tries to corral the Eazel executive team into a makeshift conference room for a press photo. CEO Mike Boich is late; he's busy working on a second round of financing. The company logo is ready -- a yellow "Eaze" with a teal "l" -- but there are still no company shirts, so Andy Hertzfeld strolls over promoting the San Francisco Museum of Modern Art on his T-shirt. Bart Decrem and Stan Christensen are polishing off a late lunch on the last weekday before the company's official launch.

It's an enticingly chaotic scene that the Eazel founders have acted out before -- several as seminal members of the original Apple Macintosh development team. This time around, these ace programmers and business folks are set on a new "Let's change the world" course: to build a user-friendly desktop for Linux-based operating systems and to make managing the notoriously tricky Linux a breeze.

With just $1 million in seed funding, they've certainly lined up a talented crew: Hertzfeld, Eazel's "software wizard," designed a significant chunk of the original Mac OS; Boich set up Apple's software evangelism group before founding Radius, a graphics-for-Macs hardware and software firm; Susan Kare, Eazel's interface graphic designer, created the original Mac icons; Guy "Bud" Tribble, vice president of software engineering, is a programming force who was the manager of the early Mac team, a Java architect and, until recently, CTO of Sun-Netscape Alliance. But for all its gifted geeks, Eazel faces challenges that have long flummoxed Linux interface designers: maintaining the power and flexibility that is Linux's hallmark while making it easy to use for newbies.

It has long been a dream of the Unix/Linux community to have a desktop as easy to use as the Macintosh or Windows platform. And there have been scores of aspirants, including at least two -- the K desktop environment, or KDE, and GNOME -- directly aimed at Linux. So, there's no guarantee of success. But the Eazel team, which will be working with the already established GNOME project, is so studded with talent that it must be given a close watch.

The Eazel desktop is only one part of the strategy, however. While the desktop will be free software, with the source code available to all comers, Eazel has a two-pronged plan that includes not only providing a friendly interface for mainstream computer users, but also making a business out of facilitating easy software installation and automatic updates of the rapidly evolving operating system and the applications that run on it. Its business model is to offer these services on a subscription basis, says Christensen, general manager of online services.

"Right now, to do system management [for Linux] requires a pretty intimate knowledge of how the software is constructed," says Hertzfeld, whose beaming round face, spectacles and disheveled brown hair lend him the magical charm of an overgrown hobbit. "You need to know about various system components -- a user of a word processor needs to know what graphics library or string library they have. Someone who just wants to upgrade their word processor needs to understand a lot of technical detail."

By summer Eazel, which publicly launched on Tuesday, will unleash its interface -- sporting friendly icons instead of command lines that tell software what you want it to do -- as a free Internet download. Early screenshots of the Nautilus GUI show a familiar icon-filled desktop and an integrated browser. A large window on the right depicts files and content, the left column provides a meta-view -- the context that lets you manage files. Kare's initial icon design is decidedly cool: the icons are pictures of your content, so if you zoom in on a word file you can see the actual words, if you highlight a sound file you can hear the music you're storing.

And items that aren't usually considered files, like e-mail messages, will appear just like word processing documents or any other kind of files. And you'll be able to customize file properties -- instead of the typical file name, type and size, you can create your own categories: By tagging your files "budget" you can quickly find all the spreadsheet, word processing, e-mail and other files related to that category.

Making it easy for users to navigate through all the information that is stored on your computer is where KDE and GNOME currently fall short, according to Elliot Lee, a Red Hat developer who works on the GNOME project. Last summer, Lee started work on a browser for viewing Linux help pages -- a single tool to view the preponderance of help pages that exist in a variety of formats: text, HTML, SGML and more. He called it Nautilus. Around the same time, Hertzfeld and a handful of programmers were working on a prototype of a new file manager for GNOME dubbed Gnomad.

Lee saw the commonality between the projects and convinced Hertzfeld to use his code as a starting point for a new graphical shell, a viewer and manager for all types of content. Before long they hit on a plan to make Nautilus the file manager for GNOME 2.0. "It's been lots of fun hacking on it, and adding what I think GNOME needs," says Lee, who continues to contribute code to Nautilus. There is no formal business relationship between Eazel and Red Hat, but Red Hat funds GNOME development, and hackers posting on Slashdot have speculated that Eazel will be bought by the cash-flush start-up or another major Linux player.

If Eazel's development team is successful with its easy-to-use interface, it could give Linux-based operating systems an inroad into the consumer market. Linux installation and support is now provided by such industry heavyweights as IBM and Dell but the difficulties of installing and managing the open-source operating system have kept all but the most dedicated Linux geeks from adopting the OS. The kind of innovations that Eazel promises could give Linux-based operating systems a chance to compete with the Mac OS and Windows, but the graphical user interface (GUI) isn't the only focus at Eazel.

"The crux of usability isn't the lack of a GUI," says Hertzfeld."There are plenty of GUIs. What we don't have is the care and feeding part -- software management. For example, when you install a new program, or your disk gets full, other things fail mysteriously. Other programs stop working. It's this horrible problem which everyone I know has been experiencing for decades now -- your trusted partner, this computer that you're pouring your life into, betrays you on a monthly basis. I've had enough of it!"

The folks at Eazel are unwilling to go into any detail about those potential services at this point, but you can envision consumer-friendly applications like Apple's new iTools -- server-based apps you access via the Internet, like the iDisk for remote file storage or HomePage, software that helps you build and maintain a personal Web site. Web-based calendaring, address book and e-mail software similar to the applications available on sites like Netscape's Netcenter could also be in the works. (Mike Homer, the former Apple and Netscape executive who launched Netcenter, is one of Eazel's board members.)

Eventually, Eazel plans a one-stop-shopping site for mainstream computer users running Linux. Presumably it will gather enough data about you to hold your hand through the whole installation and management process.

"Right now if I want to install a given package, it has to ask me lots of technical questions," says Hertzfeld. "Instead, it should be asking you these kinds of questions: What are your interests? What is your career? -- 'I'm a math teacher,' not 'I'm a user of GLib 1.3.7," he adds.

"We can help you configure your computer by knowing who you are at a very high level," Hertzfeld says. He wouldn't provide details about the data collection, but presumably you would fill out some kind of questionnaire, which would help determine what kind of software you should download. "We can give you what's good for you -- point you in the right direction anyway. You'll be able to find out what other teachers are using -- like finding out what other books people have bought on Amazon."

At first, this concept seems aimed at making Linux a friendly system for people who've never seen a line of code. But the Eazel team isn't going to throw away an opportunity to attract hackers too: Nautilus will have varying user levels -- advanced users will have access to a command-line interface, while novices will be shielded from it. And you have to assume the data collected by the site will steer hackers toward more of what they want too.

Embracing free software hackers is definitely part of the plan."It's not like we're cooking up something special and then dumping it on the Linux world," says business development VP Decrem -- who founded Plugged In, a community technology center serving impoverished East Palo Alto before embarking on Eazel. He is also the de facto office manager, bouncing out of his seat to show the photographer where to set up. "We're part of the GNOME community," he says. "We tremendously enjoy working
with the GNOME team and have a huge amount of respect and a terrific
working relationship with them."

Nautilus is free software according to the terms of the GPL license agreement, which also protects Linux, mandating that the source code to GPL'ed software must always be publicly available. And Eazel will be part of the GNOME desktop delivered with various distributions of Linux.

"Open source is just a great model for the software industry, which has taken over 15 years to develop. It's hitting a wall now because of the complexity barrier," says Hertzfeld, who seems right in his element among the sofas, beanbag and whiteboard that define a brainstorming area in one corner of the small office. "All the forces that make Linux great at being a server OS apply equally to the desktop. It just hasn't been possible because it hasn't reached that stage. If we wanted to do this two years ago, it would be pretty undoable. Now the basics are there, and now the users are there."