The parents of a murderer sue adoption workers, claiming they should have been told about the boy's mentally ill birth mother. 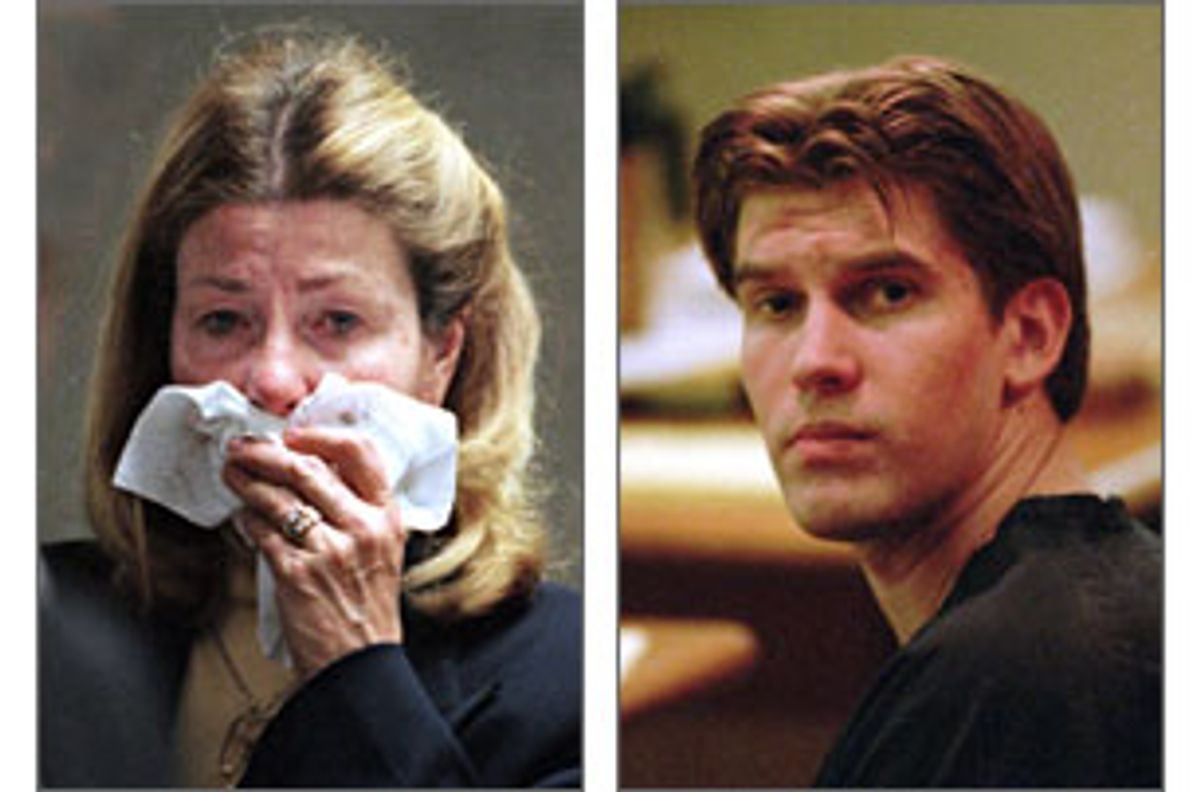 Earlier this month, the parents of murderer
Jeremy Strohmeyer filed a $1 million lawsuit
against Los Angeles County and four county adoption
workers, complaining that the adoption workers
failed to inform them about his biological mother's
history of mental illness.

Strohmeyer, 21, was convicted in 1998 for the May
1997 murder of 7-year-old Sherrice Iverson, whom he
had lured into a casino rest room while playing a
game of hide-and-seek. The murder was quick and
brutal. A security camera recorded Strohmeyer
entering the rest room with Sherrice and exiting
without her. He immediately confessed to his best
friend, and later to a judge.

He was sentenced to four life terms with no
possibility of parole. He has since recanted his
confession, but he lost his bid to withdraw his
guilty plea and take the case to trial.

At the time of his sentencing, the fact that
Strohmeyer was adopted became a huge issue for
public discourse, as talk shows debated whether
adopted children are more or less likely than
biological children to be emotionally unstable or
to commit heinous crimes.

I can understand why his parents are upset that the
adoption workers may have withheld information, but
I can also understand how it happened. Strohmeyer
was adopted at a time when matching the hair and
eye color of adoptive parents to birth parents was
the primary concern of many child welfare agencies.
Their priority was aesthetic: They wanted to make
sure the children wouldn't look like they were
adopted.

Obtaining and recording insightful, relevant and
useful information about biological families was an
afterthought in those days, if it was considered at
all. Frequently, biological parents filled out the
family and medical history forms themselves, so
they would look as good (or as bad) as they wanted
to look.

If the adoption agency in Strohmeyer's case knew
something particularly relevant, like, say, that
his birth mother had an obvious history of severe
mental illness, they should have mentioned it,
especially if the adoptive family had asked
specifically not to be given a child with that
background. But my guess is that the caseworker was
afraid that if she divulged what she knew, she
would never find a home for Strohmeyer. And in a
world where foster care is rarely as genteel and
nurturing as that demonstrated in the orphanage of
"The Cider House Rules," it is a legitimate fear.

But the lawsuit obscures an eternal dilemma that
cannot be resolved in a court. Which one of us
knows what we're going to get when we decide to
become parents? Did Kip Kinkel, who murdered his
parents and two classmates, arrive with a little
note tied to his umbilical cord that said "Warning:
This baby will one day try to kill you"? How
about Eric Harris and Dylan Klebold? Did they come
into the world with tattoos that read "Future mass
murderer"?

Of course this crosses over into the ongoing debate
about what parents should or should not have done
to prevent their children from turning into
sociopaths, and it seems that's what the
Strohmeyers are getting at. In a sense, they are
telling us: "Look, we are not responsible here. If
we'd known that this child had a genetic
predisposition for mental illness, we wouldn't have
adopted him, and you would never even know our
names." The message is that they adopted this kid
by mistake, so, everyone, don't look in their
direction and find fault.

It's surprising that, having been parents for 20
some years, the Strohmeyers can look back and
believe that if only they had known what they did
not know, their lives would have been easier and
less expensive. We certainly can't assume that
Jeremy wouldn't have killed someone had the
Strohmeyers not adopted him. Nor can we assume
that he would have. I'm sure nobody told the
Iverson family that their daughter would be
murdered in a casino rest room at age 7, either.
But somehow, the Strohmeyers plan to tell a court
that, had they known that this child might suffer
from mental illness, they would have been spared
heartache and agony, and a million dollars to boot.

Did they somehow miss one of the most fundamental
laws of parenting -- that there are no guarantees?
Sure, maybe they wouldn't have adopted him, but
they could have adopted another child with no
history of mental illness and have had the same
outcome. Is a history of mental illness in one's
biological past a prerequisite to becoming a
murderer? Or they could have adopted a child with
a sparkling genetic past who ultimately needed a
heart transplant, or who would become severely
injured in an automobile accident, or who would
become a drug addict. Isn't this uncertainty what
everyone faces as a parent? Isn't parenthood
frequently about heartache and agony?

Today, adoptive families can specify what they will
and will not take in a child, with respect to
family history or current disability. It's rather
like ordering a pizza: "I'll take a blind,
wheelchair-bound child with moderate retardation,
but hold the autism, deafness and crack addiction."

As coldly selective as it sounds, a policy that
allows adoptive families to say what they can and
cannot handle is a good idea. It helps to prevent
adoption disruption (when the adoptive family sends
the kid back). To the extent that an adoption
agency knows about a particular health issue, it
makes sense to have it on the table. In abuse and
neglect cases, for example, the family can be sure
that the child receives needed therapy for
attachment and bonding issues, anger management and
developmental delays caused by the abuse.

But in the Strohmeyer case, that's water under the
bridge. Even as adoptive parents, these people are
in the same situation as the other parents of
murderers. They have a kid with problems. To me,
this is more about the extraordinary task of
parenting, and the surprises -- some terrible, some
wonderful -- that come with it than it is about
adoption or what the Strohmeyers should have been
told.

We'd all like a heads up about what might be coming
our way. Will your husband leave you when you're
old? Will your child outlive you? Will you get
cancer? Will you win the lottery? Even if we have
some early indicators -- he seems like a faithful
guy; you're an overprotective mom; people in your
family have cancer; you never buy lottery tickets
-- they don't really tell us the truth about what
will happen to us or to anyone else.

The Strohmeyers could have safely assumed that
Jeremy was probably not born into ideal
circumstances. There probably aren't many perfectly
healthy, sane, well-adjusted, non-drug-addicted,
loved and supported, emotionally stable,
well-educated, well-funded, gainfully employed,
unabused mothers over 18 who decide to give up
their children for adoption.

An adoptive family should, at a bare minimum,
assume that the mere fact that the mother carried a
baby for nine months, while facing the decision
about whether or not to relinquish the baby for
adoption, would cause a little stress in the
pregnancy. And who knows what sort of effect the
stress of making such a monumental decision will
have on the developing baby?

Besides, this assumption of risk really isn't any
different from what biological parents face. When
you get pregnant, you don't know if your child will
arrive healthy and happy or will only appear
healthy and happy until a genetic inclination to
violence or psychosis kicks in and your bundle of
joy is suddenly a burden of worry and fear.

The only difference for the Strohmeyers is that
they believe they have someone to blame. They
should have known -- someone should have
told them. Yet I can't imagine that if they win
their lawsuit and the adoption agency acknowledges
the screw up, it will bring the closure that the
Strohmeyers are probably seeking.

Likewise, I can't imagine that they would have been
happier if they had never had Jeremy as a son. I
have to believe that they have joyful memories and
photo albums filled with proof of happier days. I'm
sure nobody promised them that, either.