Spicy, tangy and oozing, cebiche makes a great aphrodisiac. At least that's what Jorge whispered to me, across the table from my parents. 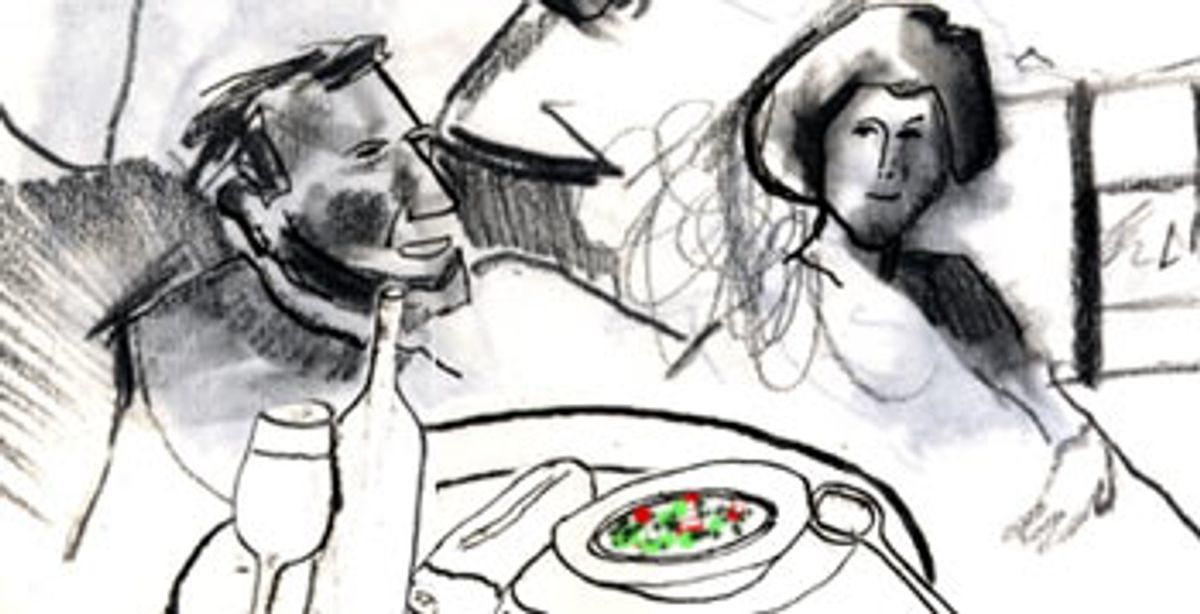 The taste of marinated fish -- Peruvians describe it as "cooked" in lime -- dances in my memory as we wander down the malecsn on the last day of 1999. My parents walk ahead, Jorge and I are in the middle and my portly aunt and uncle lag behind, asking at regular intervals how much farther it is to the restaurant. The sky is gray and threatening, but it hasn't rained in Lima since 1973 (or somewhere around then; any limeqo who was living at the time could tell you the exact date). This never-ending drought explains why the carefully watered lawns stop where the wealthy neighborhoods -- pumping in their own water -- end.

As we walk we see poor couples tossing about on this upper-class grass, as erotically involved in each other as if they were in their own living rooms. I think about the woman in Santiago de Chile who showcased her life in a glass house as an art project, and wonder why she even bothered with the appearance of walls. Here, as in most of Latin America, the concept of private space is nonexistent, especially when you don't have the means to sneak off to a hotel.

We take a seat on the third floor of the restaurant, a rickety affair composed almost entirely of windows; Santiago de Chile Woman Goes Out to Eat. I try not to think about the tremors that often rattle my own apartment and could easily reduce this place to rubble. The long walk on an empty stomach has made me lightheaded.

Jorge points out a famous Peruvian poet, his dark clothes and somber manner contrasting sharply with his glowing, vivacious daughters, or maybe they aren't his daughters after all. About six waiters take our orders (in Lima, service is either effusive or nonexistent) and, almost simultaneously, bring out food and drink -- frosty pisco sours, shellfish coated in Parmesan cheese, marinated fish and seafood oozing seductively in a spicy, tangy juice.

Cebiche is at its finest in Peru, and I can't quite explain why. Is it the Japanese/sushi influence that demands only the freshest of fish? Is it the ajm limo, the tiny pepper that teases you with visions of Mexico and its searing habaqero, yet stops short of a full-on explosion? Is it the side dishes, the sweet boiled yam and impossibly large corn kernels, the meeting of jungle, highlands and coast in one dish? As I eat and ponder, I become flushed and wonder if it's the pisco or an overdose of ajm limo.

Jorge feeds me another spoonful of black conch cebiche and expounds on the aphrodisiac properties of "leche de tigre" -- tiger's milk, those drops of lime, fish and pepper that ooze from the cebiche and form a spicy pool at the bottom of the plate. As if to emphasize his point, he takes a spoonful and drizzles it into his mouth. His teeth pass slowly over his lower lip, a gesture he often makes when he is aroused.

Feeling dizzy again, my eyes wander about the restaurant. A woman leans out the window while talking on her cell phone and I appreciatively take in her thighs and rounded ass clad in snug capri pants. Peruvian men pay fervent homage to the ass, perhaps because most Peruvian women have to get implants if they want boobs. But the butt is doing quite well, and the ubiquitous, almost impossibly tight pants on limeqa women are testimony to this celebration. My gringa friends and I exclaim, "That's so '80s" in mock horror, but that doesn't stop Jorge from asking why I always have to wear such baggy jeans.

Feeling generous, I lean over and whisper into Jorge's ear about the free view at the nearby table. I become aware of his ear, curled like a brown shell, so close to my lips. I catch the waiter's eye from where he stands by the bar and he seems to smile knowingly. My whisperings grow more descriptive and I feel Jorge's finger tracing curious circles on my thigh. My parents somehow fade from my view across the table; all there is is the smell of leche de tigre on my fingers, Jorge's neck bared before me as if for sacrifice and a sudden, urgent need to take off my baggy pants and pull him under the table.

My uncle breaks the spell with his return from the bathroom, joking about the obscene graffiti near the urinals. As we pay the bill, leave generous tips and say goodbye to our 146 waiters, I realize that this will be the longest, most agonizing trip down the malecsn I will have ever have been forced to walk, like the agony of a pilgrimage before faith's sweet benediction. I resist the urge to run and instead snake my arm around Jorge's waist, plunging my hand deep into his back pocket and letting my fingernails sketch out the promise of what awaits him at the end of the journey.

Michele Back is a Foreign Service officer working at the U.S. Embassy in Lima, Peru. Before that she worked as a travel writer and editor for Fodor's Berkeley Guides in Mexico and Costa Rica.

MORE FROM Michele Back