ENow wants to track every word you type in a chat room and peruse the results to divine the "global collective consciousness." 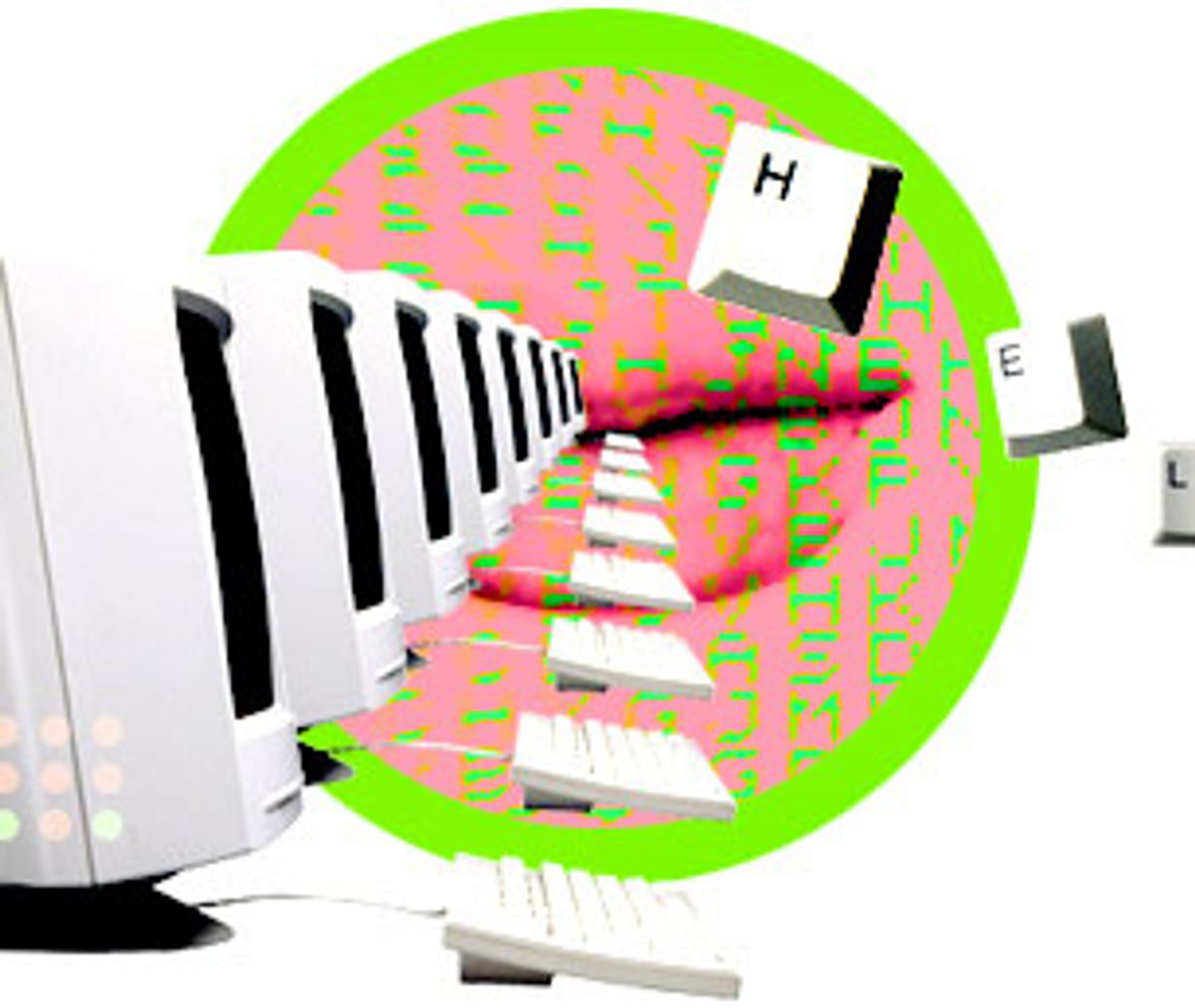 At first glance, the little Los Angeles firm eNow appears to be your typical high-tech start-up. It's got a new Net application called ChatScan, currently in a closed beta test but due to launch in April, which will let you search live chat much like you search Web pages. It's got a zippy Web site promising that "ChatScan is your direct connection to fascinating people." It's got $10 million in venture capital from a collective of Hollywood executives called Entertainment Media Ventures. And it's got a dynamic CEO with an entrepreneurial risumi as long as your arm.

But eNow considers itself to be more than just a technology start-up. As the company's press materials put it, eNow wants to "realize the Internet's total communication potential as an aggregator of human discourse and information" -- not a small task for an enterprise that is less than a year old. And eNow's first product, ChatScan, promises to shake up the world of chat the way DejaNews initially shook up the world of Usenet -- by making the evanescent and scattered medium permanently archived, loggable, searchable and, hopefully, meaningful. It's a technology that could stir up chat communities and privacy advocates alike. And to top it all off, CEO Edo Segal plans to start a whole foundation helmed by the granddaddy of all futurists, Kevin Kelly, just to study the ramifications of his own work.

Segal is a veteran entrepreneur of Israeli birth, who founded his first start-up -- a gaming company -- when he was 15 years old, and has since skipped from interactive design to engineering to marketing. His company was conceived last year with a lofty vision; as Segal describes it, "It's like a religion, a company with a purpose."

If eNow is a religion, than its principle icon of worship is its first product: the chat search software called ChatScan. ChatScan works like this: A human editorial team identifies thousands of chat rooms across the Web -- regular rooms hidden everywhere from UnderNet to Talk City to CNN. Using what Segal describes as an "artificial intelligence agent," ChatScan monitors the most active conversations in these chat rooms, logs the text and sorts the rooms into categories based on keyword identification: a room where people are discussing Andre Agassi would get categorized as "sports," a room where chocolate mousse is the topic of conversation would be filed as "food" and so on.

Using the ChatScan client -- a 60K Java applet -- users can either click on presorted categories to pick out topics of interest; or they can do their own keyword search. If you type "puppies" into the keyword file, the client will swiftly search the last five minutes of all chats currently in its database and spit out the resulting canine matches, with less than one second of delay. All you have to do is select one of the matching keyword chats and you will immediately join the conversation.

The idea, says Segal, is to make it easier to find relevant conversations, rather than muddling through rooms full of teenagers swapping age/sex information (unless, of course, you are a teenager who wants to find those conversations, in which case ChatScan is also useful). "Chat is inaccessible -- there are thousands of rooms and no way of finding out what people are talking about without going from room to room," he explains. "We are driving people to [chat rooms] where they are relevant."

The aim of ChatScan's application will be immediately obvious to anyone who has ever bumbled from empty chat room to empty chat room, hoping that someone interesting will strike up a conversation. Not only will ChatScan send you to active discussions, but its proprietary interface makes it easy to flip from one chat to the next without having to download multiple chat clients.

Besides helping you find like-minded hobbyists and enthusiasts (or, I'm guessing, willing cybersex partners), there are also a legion of other, less obvious uses for ChatScan. There's the obvious vanity search -- "Who's talking about me right now?" And it should also be easy for the FBI, for example, to peruse chat groups to find out who's talking about building bombs or who's on the prowl for nudie pictures of teenage girls -- assuming, of course, that anyone involved in such illegal activities would be stupid enough to do it in a public chat room.

But ChatScan could also exacerbate some of the nastier aspects of these online communities. A dirty old man, for example, will find that it's easier to search for a chat room of giggling teenage girls. And Bruckman notes that ChatScan would make it easier to stalk or harass someone who frequents chat rooms -- an occurrence she says isn't unusual. When all chat rooms across the Web are searchable, "your ability to get away is severely diminished," says Bruckman.

Segal asserts that he is actively concerned about privacy issues -- "Privacy right now is a pretty open nerve," he contends -- and as a result ChatScan won't search private chat rooms, rooms with passwords, or one-on-one chats. But there are other open communities that might not cozy up to the notion that their chatter is suddenly searchable. Many public channels on UnderNet, for example, are habituated by a core group of regulars who consider their cozy (albeit public) chat rooms a community. If lurkers can flit in and out of conversations, following keywords rather than relationships, will this hinder the bonds of that community?

"There's a certain sense of intimacy that develops among people who feel like they have a community; this technology is making it easier for other people to join their group, which they may or may not want," explains Bruckman. "Even for a public group, it's like a tavern -- you may have regulars that hang out at a particular tavern, and there's a sense of intimacy. With this, it's like the tavern is running national advertising."

To enable its service, eNow will be tracking and archiving millions of hours of chat. Will every word you type in a chat box be permanently stored in a database? That would require an amazing amount of data storage -- and eNow wouldn't say if such a vast chat collection is in the works. But any archiving of chats might alarm those who like to think that their digital chatter merely disappears into the ether.

Still, privacy advocates aren't, for the moment, terribly concerned about ChatScan's ramifications. Andrew Shen, a policy analyst at the Electronic Privacy Information Center, points out that a product like ChatScan is "a double-edged sword -- it allows you to talk to other people but it also allows you to be spied upon." But he says he is reluctant to think about it as a privacy issue -- after all, chat rooms are public even if users choose to think of them as intimate forums. He notes, "It may chill some free-flowing discussion that may go on in chat rooms, and make me more reluctant knowing that people can listen in virtually. But I'm hesitant to call it a privacy concern."

ENow is aware of the concerns that its technology might spur -- but Segal doesn't consider the privacy issues a barrier. "I'm sure there are dangerous aspects in everything to do with progress," he says. And, in turn, he says he wants to "stand back and ask what we're facilitating and make sure it's moving forward and evolving rather than being abused. It's a great responsibility."

In other words, eNow doesn't just want to build software, it wants also to build ideas. So Segal is starting a think tank to foster those ideas: Along with eNow.com, Segal is developing a partner site, eNow.org, with Kevin Kelly, Wired editor-at-large and noted futurist.

Under Kelly's supervision, eNow.org will study the social implications of eNow.com's software. Through its Web site and a series of grants and events, eNow.org will invite pundits, futurists, entrepreneurs and enthusiasts to discuss the Net's "global collective consciousness" -- a collective consciousness, the idea goes, that can be viewed by perusing the thousands or millions of simultaneous real-time chats using ChatScan.

"I started the foundation because I felt that the Net is biology, not technology," Segal says. (Kelly could not be reached for comment.) The foundation will discuss how access to real-time information changes the way we see the world around us; does it turn our knowledge sets into extended relationship networks rather than acquired information databases? "Access to information is changing the consciousness of people and how they perceive the world around them -- the insight they have isn't all acquired knowledge, but is external knowledge," Segal ponders.

Of course, it could be said that chat -- a world of one-liners, abbreviations and truncated conversations -- may not be the most effective medium to study the world's interactions and ponder their meanings. ENow is going to give it a shot anyway, and Segal hopes eventually to extend its search technology into other kinds of live entertainment as well -- making live television searchable, for example. In Segal's vision, the entire ephemeral "now" will soon be logged for posterity, as long as it's in digital form. Starting in April, you might just think twice before you type.