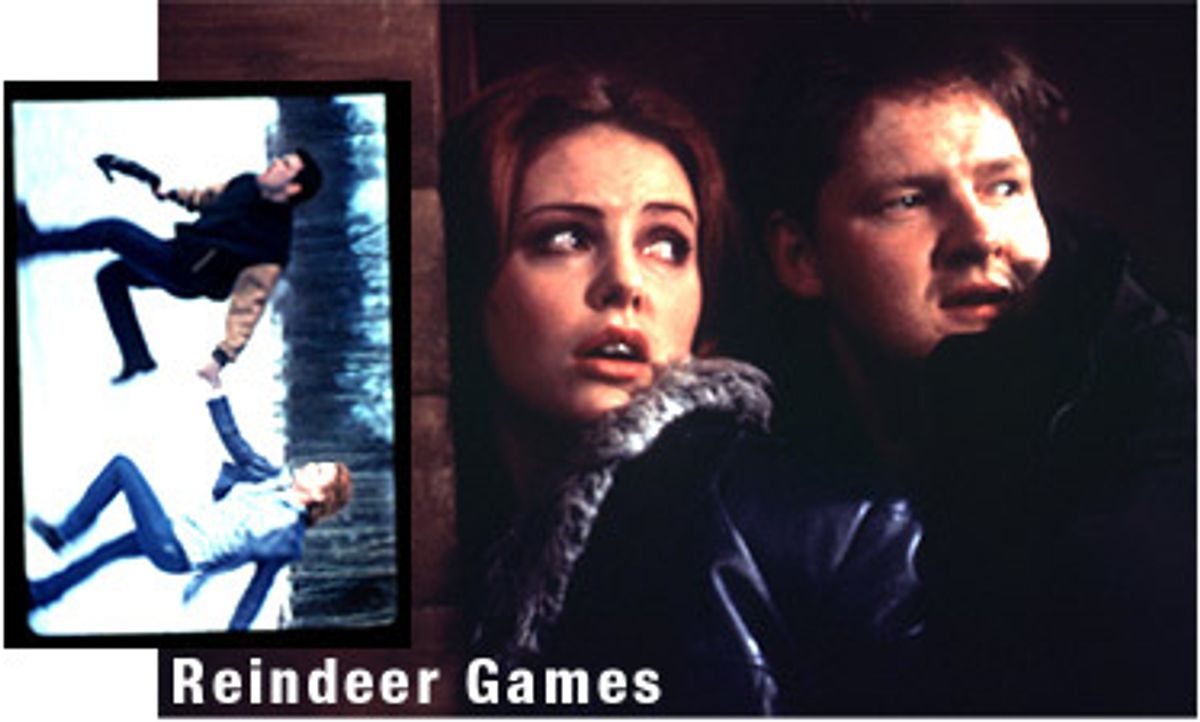 Ben Affleck goes through "Reindeer Games" taking more punishment than Cary Grant's blue suit in "North by Northwest." And after being kicked, punched, beaten, slammed into walls, bashed with a gun, shot at and used as a human dartboard, he comes out looking nearly as good. That Affleck manages to give a performance at all in director John Frankenheimer's ludicrously sleazy pulp is remarkable. That he manages to turn in a charismatic piece of star acting is rather amazing. As it barrels along in its brain-dead manner, "Reindeer Games" becomes less about a plot to rob a casino than a demonstration of what Affleck can withstand. Shoddy direction? No problem. Crummy script? A snap. Cinematography that's less attractive than the nearest subway washroom? Bring it on. Affleck laughs in the face of hackwork.

Actually, there's a sliver of an amusing idea floating around in this trash. Affleck plays Rudy, a car thief who's released from prison and decides to impersonate his dead cellmate in order to score with Ashley (Charlize Theron), the looker who'd been the dead man's romantic prison pen pal. It works like a charm until Ashley's slimeball brother, Gabriel (Gary Sinise), shows up. It seems that in addition to steamy endearments, Rudy's cellmate had filled his letters to Ashley with tales of the casino where he'd worked as a security guard. Gabriel got his hands on the letters and hatched a plan to use the information, and his sister's new boyfriend, to rob the place on Christmas Eve. So Rudy finds himself with family problems before he's even joined the family: convince his new girl's psycho brother that he is the man he's impersonating, or be killed for being an impostor.

That's a premise that Elmore Leonard might have worked some jim-dandy twists on. But I've read Elmore Leonard, and screenwriter Ehren Kruger, ladies and gentlemen, is no Elmore Leonard. Kruger, previously the writer of "Arlington Road" and "Scream 3," is like a kid with a balloon, seeing how big he can blow it up and, inevitably, having it blow up in his face. He can't resist providing just one twist more and, in the process, makes everything that's come before collapse into implausibility.

Still, a director with enough style and wit to ride over the script's trashiness might have made "Reindeer Games" into a fairly good time. As usual, though, Frankenheimer brings it all the style of brown shoes worn with a tuxedo. Apparently, Frankenheimer has never met a close-up he didn't like. He brings the camera in so close to the actors' faces that even the widescreen can't encompass them.

I gave up on Frankenheimer's last picture, "Ronin," after 40 minutes. By the time the plot moved to the Mediterranean and I was stuck looking at yet another crummy hotel room, I felt as if I'd been condemned to spend the afternoon in a bus station. On the basis of those 40 minutes and all of "Reindeer Games," I'd have to say that Frankenheimer is developing what is quite possibly the single ugliest visual style of any director currently working. Shot in uniformly flat lighting by Alan Caso in a succession of cheap diners, anonymous motel rooms, a cinder-block casino and the back of an 18-wheeler, "Reindeer Games" has the greenish-brown tint of yellowing wallpaper and moldering carpet. There isn't a scene that's not an insult to the eyes. And the movie has a spirit to match.

Kruger's script for "Reindeer Games" is clearly meant to be funny, but Frankenheimer doesn't have the sophistication to turn the scumminess of his would-be thieves into stylized caper comedy. His idea of characterization is to show us one of the gang (Donal Logue) with bits of unchewed food over his teeth and to have the back of Gabriel's 18-wheeler decorated with porno cutouts. He's thuddingly literal about the violence. One of his favorite devices is to have the actors talking to us while dried blood covers their faces, and to linger on faces that have been beaten to a pulp.

When Frankenheimer wants to steam up the sex between Affleck and Theron, he shoves the camera in between them, cutting and zipping around so you have no idea if they're having sex or practicing tae-bo. And as for Theron's nude scene, let's just say I might be willing to trust Frankenheimer's eye at a butcher shop, but not when it comes to shooting one of the most beautiful women in current movies.

There's nothing much to say about Theron's performance since she doesn't get to give one, and that's a blessing considering how talented actors like Sinise and Clarence Williams III are reduced to popping their eyes and nearly salivating into the camera. All of which only makes you wonder: How does Affleck do what he does?

Lately, Affleck has started to arouse the kind of hostility that is always about something more than an actor's ability, hostility that suggests, for one reason or another, that he gets under people's skin. It might be any number of things -- the fact that he's good looking, or that he radiates the sort of confidence people always misread as conceit. Much of it, I think, has to do with the sheer volume of movies he makes. Unlike his friend Matt Damon, who seems careful to choose prestige projects, Affleck works all the time, and often he doesn't choose very well. When people dismiss an actor because of the kind of movies he's in, that saves them the work of judging the performances. In fact, as a working actor, Affleck may be getting a chance to flex muscles that Damon hasn't yet.

Certainly "Reindeer Games" is a bad choice by any reasonable measure. And yet Affleck was right to make it. For someone who's so much of a guy, there's remarkably little braggadocio to Affleck's screen persona. Instead he conveys a sort of outsized affability, just laid back enough not to seem overeager, and carrying just a trace of deadpan put-on. He knows it's corny to be such an all-American good-looking guy, but that it can also be sort of a kick. Affleck's Rudy is a classic crime-story patsy, a guy who follows his dick and finds himself in, uh, a tight spot. Affleck's twist is to play that sort of guy with the charisma of a romantic lead. You don't believe for one minute that he's an ex-con. He seems like such a nice boy -- surely it was a misunderstanding.

Affleck uses his innate likability to make us root for Rudy, and to make sure that he doesn't sweat off his movie-star glamour as he faces down one damn thing after another. He seems to be one of the few actors around (George Clooney is another) who can encompass irony without putting quotation marks around the emotion he's playing. Certainly not many could have pulled off the phony Capraesque flourish that closes the movie, but Affleck does by turning it into a good corny joke that, somehow, isn't completely insincere. In "Reindeer Games," Affleck has the last ho ho ho.