How will the acquittal play in the Giuliani-Clinton Senate race?

"Let's move this out of politics," the mayor says. Fat chance, when his opponent's husband gets to decide whether federal civil rights laws apply. 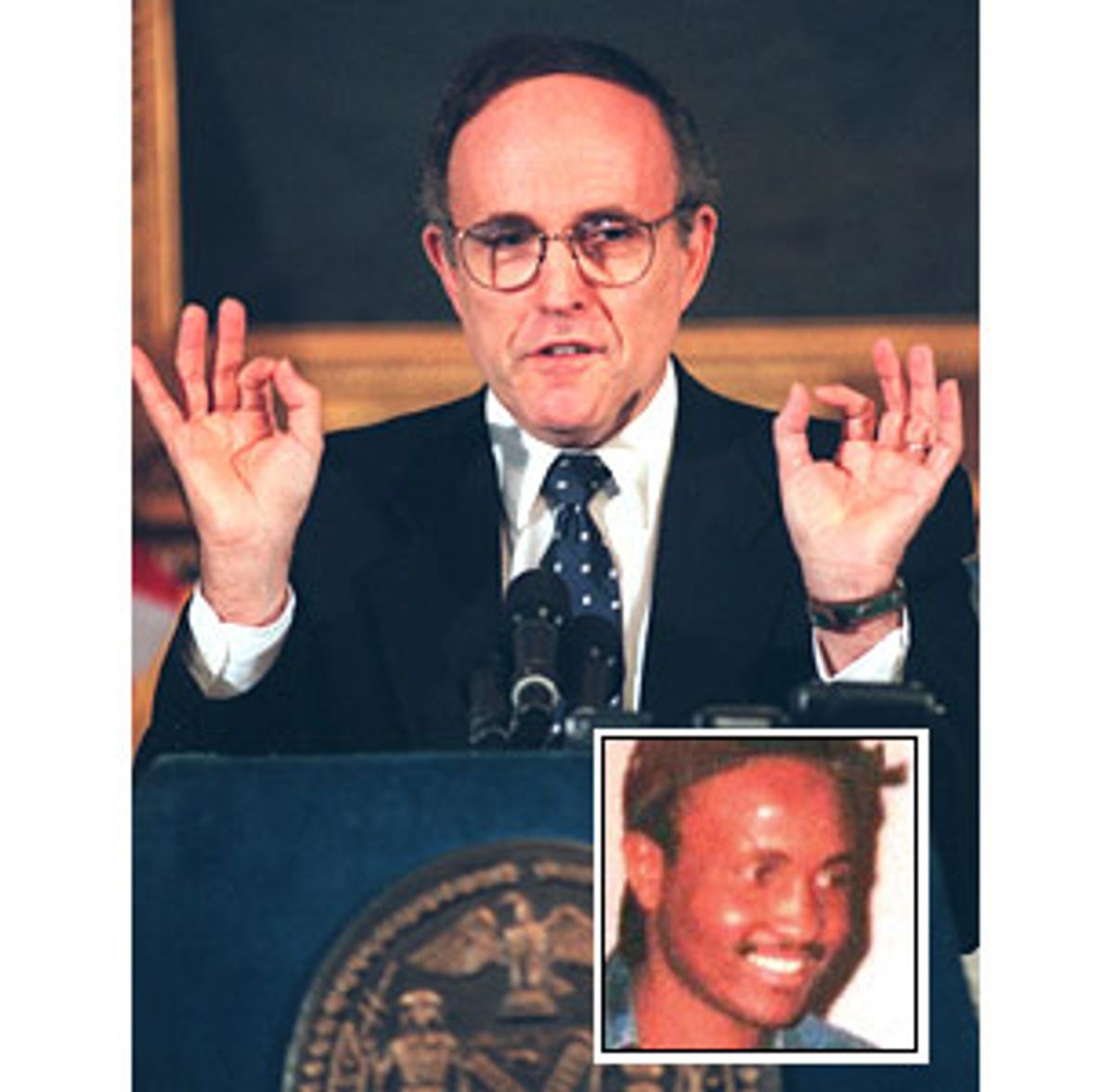 But this was no ordinary chief executive commenting on a controversial jury verdict: This was the mayor credited with restoring order to the city; who has backed the police at nearly every turn; whose administration's upper reaches have been virtually all-white for more than six years; and who once refused to meet with some of the city's and state's highest-ranking African-American elected officials.

And this was the city where, twice in the last 11 years, racially tinged acts of violence -- the killing of a young black man in Bensonhurst in 1989 and days of riots in Crown Heights in 1991 -- helped contribute to the unseating of two incumbent mayors. So commenting on this verdict might be fraught with political peril, and might require a measure of caution.

The former U.S. attorney expressed his sorrow for Diallo's family, but soon unleashed his anger at the people he has referred to in the past as the city's "anti-police lobby."

"Probably until the day I die, I will always give police officers the benefit of the doubt," he said in his firm-yet-understated manner. "We have racism in New York City, unfortunately," he added. "We also have a vicious form of anti-police bias which leads to entertaining every doubt possible against the police, and you know, police officers are human beings also."

And the controversial decision to move the trial out of the majority black-and-Latino borough of the Bronx to upstate Albany County -- a decision that angered so many -- was an exercise in "courage" by the judicial system, Giuliani said, because "the carnival-like atmosphere" in the city meant it was "impossible for these defendants to receive a fair trial."

"This jury reaffirms our confidence in the American system of justice," he said, later adding, "Thank God for America and thank God for our court system."

The mayor concluded with an attack on people who "protest against the police and blame them for every ill in society." This verdict should prompt them to reexamine their mindset, he insisted. "Let's move this out of politics."

There's little chance of that. Diallo's family and supporters have asked that the case be revisited by the U.S. Justice Department -- the agency controlled by the husband of Giuliani's Senate opponent, Hillary Rodham Clinton. Such a move would be inappropriate, the former federal prosecutor explained. "I know those rules like the back of my hand," he said.

But down the hallway from the mayor's press conference, just a few minutes later, several of the city's elected Democrats disagreed. Gathered in front of a statue of George Washington in the City Hall rotunda, they declared their support for a federal civil rights investigation, and their disappointment at the verdict.

Meanwhile, up in Albany, a crowd gathered to listen to the Rev. Al Sharpton, who had organized so many demonstrations in front of the city's police department in the wake of Diallo's shooting, demonstrations that forced the mayor to meet with many of the black leaders who had long been objects of his scorn.

"This is not the end, this is only the beginning," said Sharpton. "We said from the beginning that we would pursue this in the federal courts; we had to take a detour to Albany. That detour is over."

More than 100 people gathered outside the Diallo apartment in the Bronx in a spontaneous demonstration after the verdict. But there will likely be a bigger reaction on Saturday, when a mass protest is planned at 6 p.m. at 59th Street and Fifth Avenue.